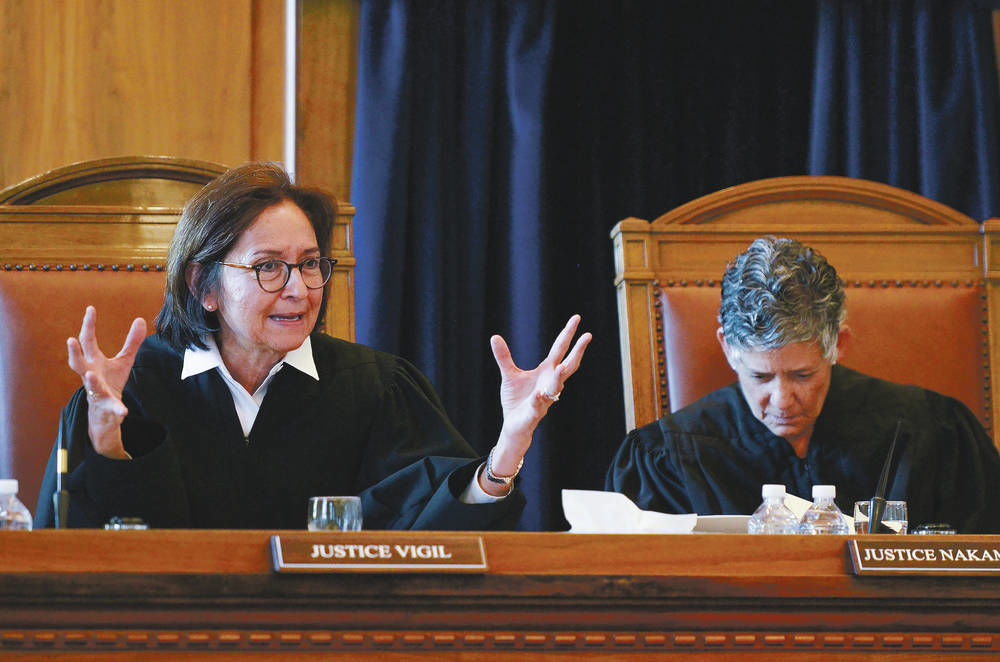 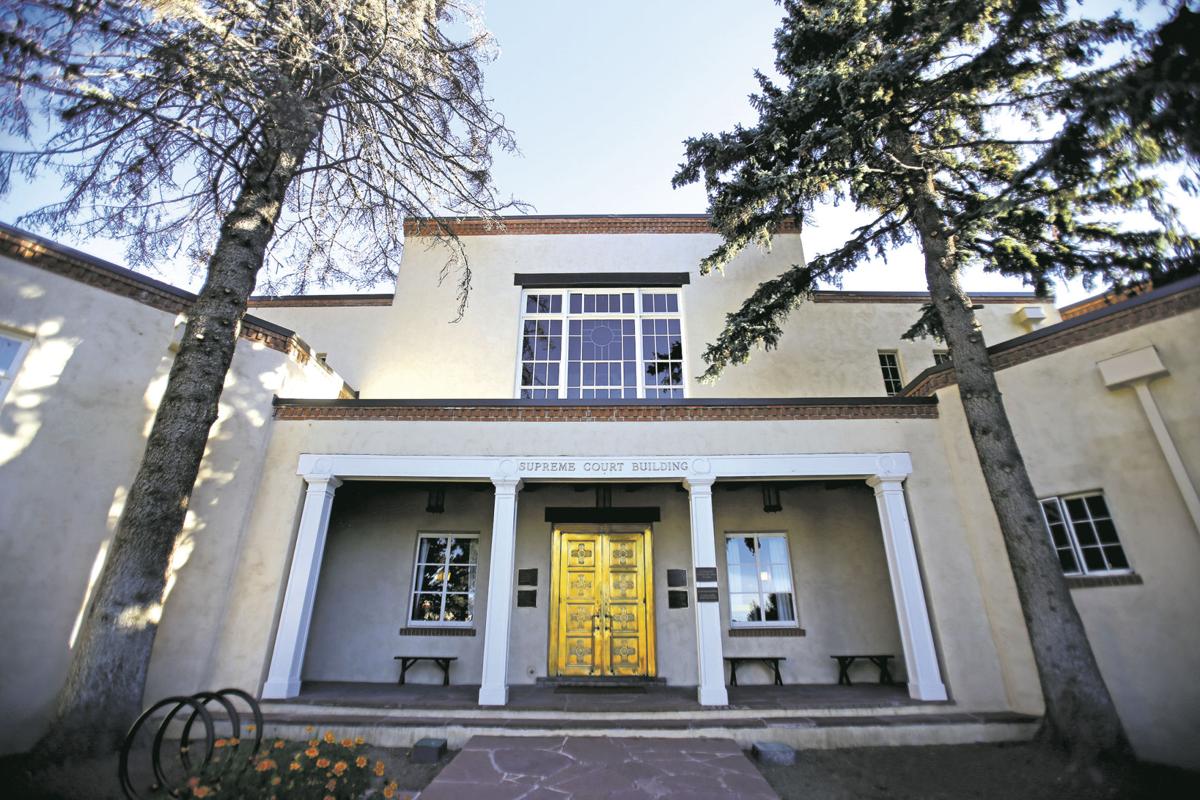 The New Mexico Supreme Court on Tuesday rejected a petition to conduct the June 2 primary election solely by mail, quickly drawing praise from Republicans and condemnation from Democrats who say the ruling will put poll workers and voters at risk.

Chief Justice Judith Nakamura acknowledged the state is in the midst of a public health crisis and that voting by mail is the safest option. But justices nonetheless ruled unanimously that state law does not allow ballots to be sent automatically to voters eligible to participate in the primary.

Justices in effect acknowledged that allowing an election by mail would require lawmakers to change state law — something parties who petitioned the court to rule on the matter had argued is impossible during the ongoing coronavirus pandemic because it would put lawmakers at risk of contracting or spreading COVID-19 in a hypothetical special session.

Instead, justices have ordered the Secretary of State’s Office or county clerks to send an application for an absentee ballot to every registered primary voter in the state.

Meanwhile, polls will remain open — an event that drew national attention when Wisconsin hosted in-person primary voting last week after Republicans there were similarly successful in blocking an election by mail.

“No one — no one can deny the devastating effect this virus has and continues to have on our community,” Nakamura said in her closing statement. “However, the relief that is requested is specifically prohibited [by state law], which says that a mail ballot shall not be delivered by the county clerk to any person other than the applicant for the ballot.

“That being said, there is no prohibition regarding the secretary of state or county clerk mailing out an application for an absentee ballot,” she added.

To cast a ballot in the state’s primary, a voter must be registered with a major political party.

Different attorneys on behalf of Gov. Michelle Lujan Grisham, Secretary of State Maggie Toulouse Oliver, the Democratic Party of New Mexico and 27 county clerks across the state argued a decision from the high court to allow an election by mail is necessary and prudent to protect public health during the viral pandemic.

But Carter Harrison, an attorney representing the New Mexico Republican Party, numerous GOP state lawmakers and three county clerks said the request from Democrats calls into question the very foundation of the state’s separation of powers by asking the court to rewrite the law rather than the Legislature.

During questioning, some justices — notably Nakamura — appeared skeptical of intervening in an area that under normal circumstances would be determined by state lawmakers.

The court will issue a written order this week and a written legal opinion to follow at a later date, Nakamura said.

The decision drew the ire of Democrats in New Mexico, who said the Republican Party, which successfully argued its case Tuesday before the court, is responsible for a situation in which “many poll workers and the general public will have to choose between exercising their right to vote and protecting their health.”

Democratic Party Chairwoman Marg Elliston said in a statement following the court decision that the party “remains concerned about how in-person voting could threaten the health and safety of many New Mexicans” and said Democrats “regret that the GOP’s efforts to suppress the vote have made it harder to vote and put poll workers at risk, but we will not give up this fight.”

In a statement, Lujan Grisham said: “In-person voting poses a grave threat of heightened transmission of the virus. I remain confident our state’s primary election can be conducted almost entirely if not entirely through mail to ensure the safest possible exercise of New Mexicans’ right to vote.”

U.S. Rep. Ben Ray Luján said in a tweet that “Republicans efforts to restrict voting during a pandemic will put them on the wrong side of history.”

Republicans, however, praised the decision. They had argued that a court-ordered election by mail tramples on the authority of the Legislature to make or change state law.

Although Republican Party Chairman Steve Pearce has said the issue was largely prompted by fears that an election by mail could increase the chances of voter fraud, the attorney representing the party Tuesday mainly argued the case is about separation of powers.

Pearce said in a statement after the ruling, “This decision by the Court ensures that the health and safety of every voter and worker is protected, while making sure that our election will not be susceptible to fraud.”

The GOP said if justices had ruled otherwise, “it would have usurped the power of the state Legislature and violated New Mexico’s separation of powers.”

Toulouse Oliver’s office said it will work with county clerks to make sure the primary election is as safe as possible.

“Though the court today did not agree with the proposal put forward by my Office and the state’s County Clerks for an all-mail Primary Election in order to protect both the health and the rights of New Mexico voters, voters will still have everything they need to make their voices heard on June 2nd,” Toulouse Oliver said. “My Office will comply with the court’s order and mail absentee ballot applications to all voters registered with a major political party.”

New Mexico residents must register to vote or update their voter registration by May 5 to vote in the primary and have until May 28 to apply for an absentee ballot.

New Mexico residents must register to vote or update their voter registration by May 5 to vote in the primary and have until May 28 to apply for an absentee ballot.

The title of the column is wrong. The court decision is a victory for the law.

I am staunch Democrat, but don't disagree with court ruling. But frankly, during this pandenmic, I could care less about trivial matters like a mail-in ballot. It's like no news.

Quashed 6-0! Once again the democrats attempt to pave a way to cheat on elections has failed. This by no means is the end of this. They will try again as Secretary of State Toulouse Oliver proved over and over again.

Silly little person. This will not mark the end of this issue. It is only “cheating” to you guys because the GOP would be totally and utterly defeated with mail in ballots. And boo to you SCONM for not prioritizing New Mexicans health and safety first and foremost.

I guess you missed the point that the NMSC ordered the SOS or the county clerks to send applications for absentee ballots to all voters. It was a waste of court time because the result will hopefully be the same--staying safe while exercising the fundamental right to vote. PLEASE everyone fill out that application for the primary and ask for one for the general election too. Vote and stay safe.

Let's hope the Legislature can amend the law, and that New Mexico Republicans will have better sense than their national brethren. On the other had, Pierce has never been particularly enlightened. Hope for the best, but don't count on it.

We all know which party lies, cheats, and steals. And now they are worried about laws and constitutions? It would be funny if fascism was funny.

It is time for the Governor to call a special session and for the legislature to take action on this issue. Surely the 102 New Mexico legislators can figure out a way to meet and vote safely to safeguard the health of many thousands of voters.