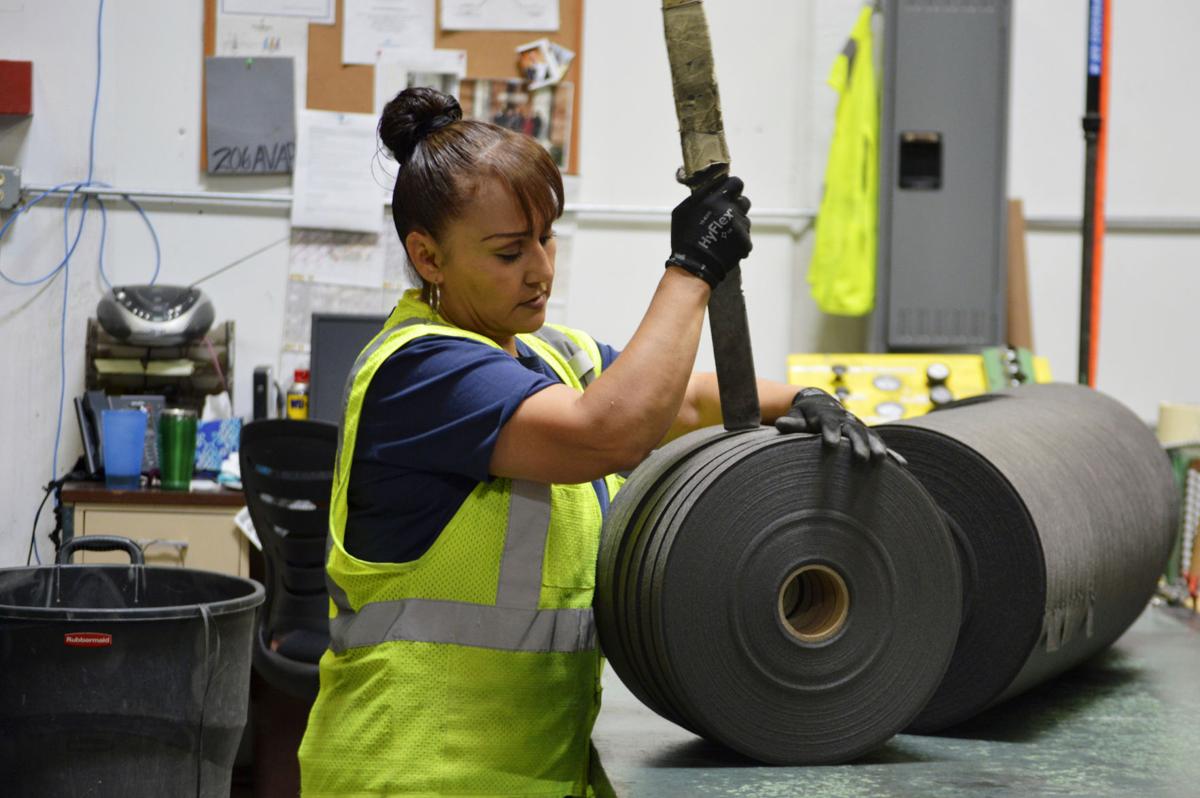 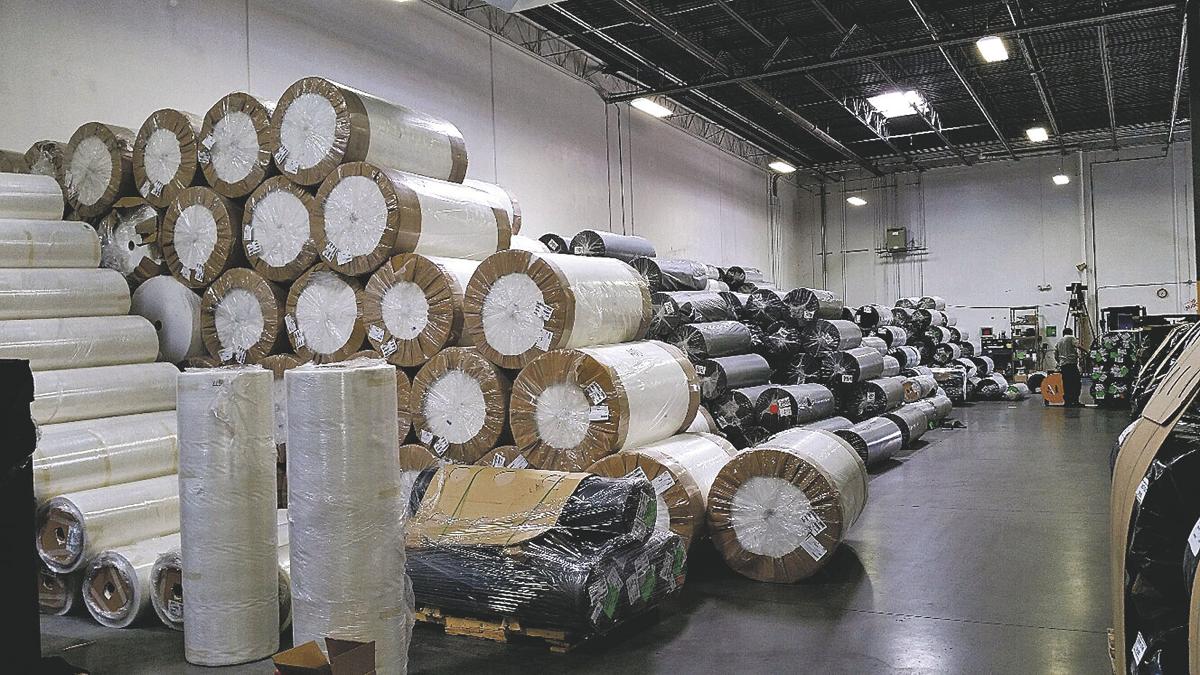 Acme Mills, a firm that produces scrim, a light cotton used in upholstery, especially automobile seats manufactured in Mexican plants near the border, has temporarily shut down its Santa Teresa plant, says Jerry Pacheco, president of the Border Industrial Association. 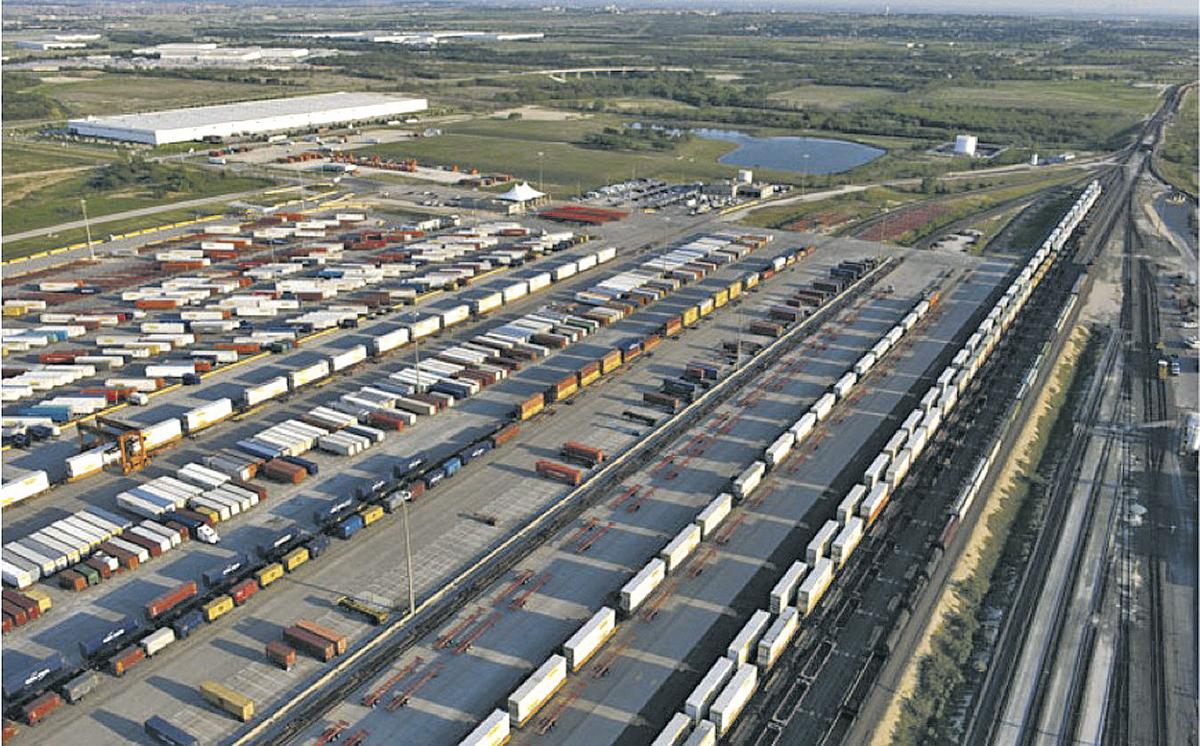 Union Pacific Railroad opened its $400 million intermodal facility in Santa Teresa in 2014 with the help of lucrative state tax credits to reduce the costs of fuel for the company. 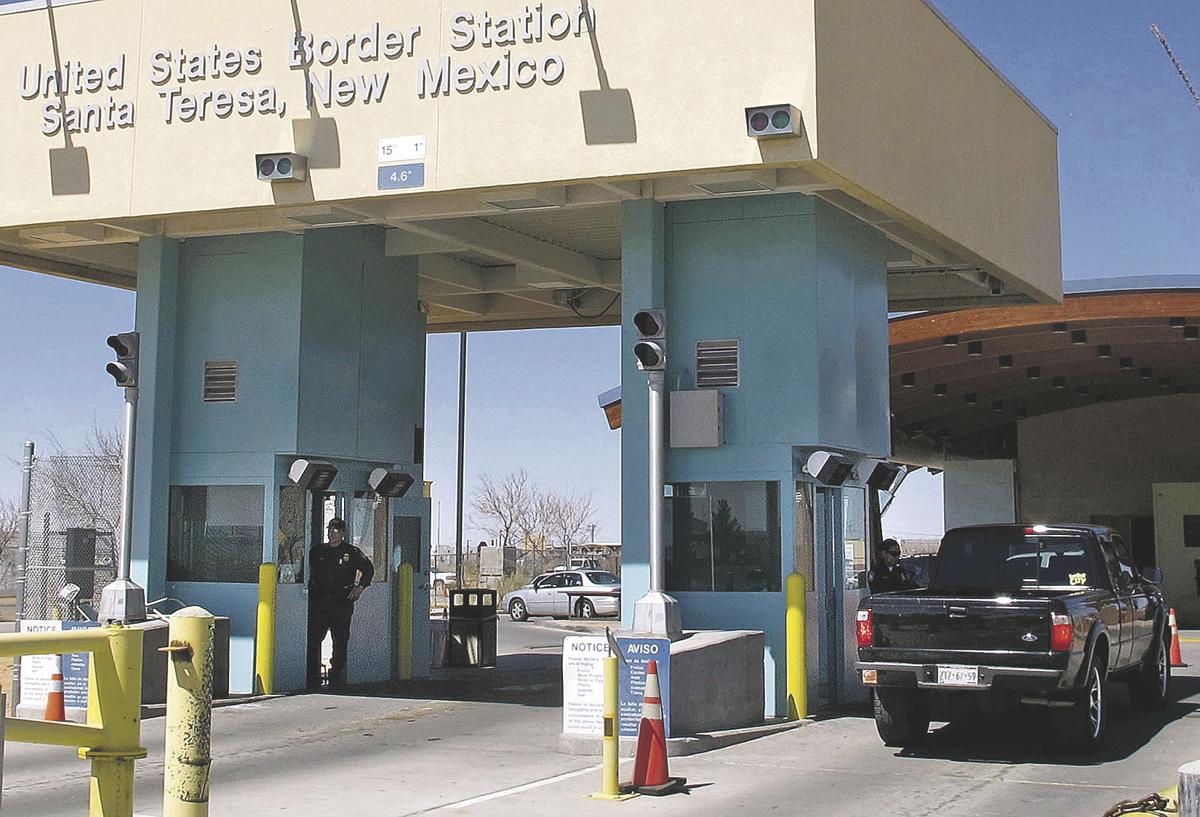 Traffic from Mexico crosses into the United States at a border station in Santa Teresa in March 2012. While more than 10,000 commercial vehicles passed through the border crossing in April 2019, that figure was down by about 2,000 this April, according to unofficial figures cited by Marco Grajeda, director of the New Mexico Border Authority.

Acme Mills, a firm that produces scrim, a light cotton used in upholstery, especially automobile seats manufactured in Mexican plants near the border, has temporarily shut down its Santa Teresa plant, says Jerry Pacheco, president of the Border Industrial Association.

Union Pacific Railroad opened its $400 million intermodal facility in Santa Teresa in 2014 with the help of lucrative state tax credits to reduce the costs of fuel for the company.

Traffic from Mexico crosses into the United States at a border station in Santa Teresa in March 2012. While more than 10,000 commercial vehicles passed through the border crossing in April 2019, that figure was down by about 2,000 this April, according to unofficial figures cited by Marco Grajeda, director of the New Mexico Border Authority.

When people call CN Wire Corp. in Santa Teresa these days, they get a recorded message directed at all employees.

“This is to inform you that we will see a reduction in hours,” it says, telling workers the company is closed for production on Fridays. “We hope this will be a temporary change.”

The copper wire manufacturer isn’t alone. Since the start of the novel coronavirus outbreak, a number of companies at the Santa Teresa industrial parks have had to cut hours, announce furloughs or layoffs, or temporarily shut down their plants.

While pandemic-fueled layoffs and shutdowns have plagued most areas of the state and national economy, the impact of COVID-19 at New Mexico’s border is different. Stay-at-home orders aren’t hurting operations at Santa Teresa’s industrial plants because the companies are considered essential. What’s hurting them are disruptions in global supply chains from Asia to the U.S. to Mexico.

“All of us are affected,” said Jerry Pacheco, president of the Border Industrial Association.

There are other differences as well, and some could actually help the area rebound faster than others in the long term. Industrial manufacturing could be more resilient than other industries, and the pandemic might accelerate efforts by global companies to set up more operations at the U.S.-Mexico border as they look to lessen their dependence on Asia.

Still, times are tough. At the start of the COVID-19 outbreak, companies were impacted by a shortage of supplies from Asia. Then they were affected as U.S. manufacturers that use their parts, such as the major automakers, shut down production.

Now, the biggest problem for manufacturers is coming from Mexico, where the government of President Andrés Manuel López Obrador issued public health restrictions closing the majority of factories and has given unclear signals as to when they will be able to open again.

Those shutdowns have affected Santa Teresa-based companies because many of them send their products to factories in Ciudad Juárez, where they are used in final goods that are then exported to the U.S. market.

That includes CN Wire, where factory shutdowns in Mexico and the U.S. have caused a “very, very significant” impact on sales and revenue, said human resources manager Juan Carlos Nuñez. The company, which makes copper wire for the automotive industry, has had to lay off workers, he said.

“It’s a domino effect,” Nuñez said in an interview. “Our product is used in Mexico plants, and then if they’re closed, they’re not going to request copper from us.”

Shutdowns in the U.S. are now easing, and big American manufacturers such as General Motors are planning to restart production this week. But it’s still unclear when Mexican factories will open, and that’s where the majority of CN Wire’s customers are.

“It’s going to be not a conflict but a difficult situation where the U.S. is opening, but with Mexico, we don’t know exactly what the situation is,” Nuñez said.

U.S.-owned factories across the border in Chihuahua, known as maquiladoras, became a focal point of the COVID-19 outbreak last month, when numerous workers died after contracting the virus and co-workers protested over conditions.

Lear Corp., which manufactures car seats and electrical systems, said 18 workers at its Juárez plant have died of COVID-19. Honeywell International also reported a death there, according to Reuters.

Public health orders in Mexico have followed a different timetable than in the U.S., in part because the outbreak began later there. The country also has issued confusing guidance on whether factories will be able to reopen in lockstep with U.S. manufacturers.

On Wednesday, the Mexican government said its auto sector could resume operations Monday. The following day, it said auto companies must wait until June 1. It changed its tune again Friday, saying companies could open sooner with approved safety measures.

Other companies based in Santa Teresa have had trouble with supply chain disruptions, too.

FXI declined to comment for this article, while Acme Mills and Corrugated Synergies did not respond to requests for information.

State officials also confirmed the Mexico closures are hurting industrial activity and trade at the border.

“We primarily have a lot of the supplier companies here in Santa Teresa, so our main operation is supplying those companies on the Mexican side,” Marco Grajeda, director of the New Mexico Border Authority, said in an interview. “Clearly, having those companies closed — that is impacting us.”

The layoffs and furloughs are putting jobs at risk throughout southern Doña Ana County, where around 4,500 workers have employment directly related to trade with Mexico, said Chris Erickson, an economics professor at New Mexico State University who studies international business in the border region.

“The COVID-19 pandemic has resulted in many maquilas in Juárez and elsewhere in Mexico closing, endangering these jobs,” Erickson said.

Many workers at the Santa Teresa plants live in Sunland Park, Anthony and other nearby communities. Sunland Park Mayor Javier Perea did not return requests for comment.

The New Mexico Border Authority said it did not have data on how many manufacturing or trade-related jobs have been lost or furloughed at the border region since the start of the pandemic. A spokeswoman for the state Department of Workforce Solutions did not return a request for comment Friday.

But it seems clear the supply chain issues will undoubtedly hurt a part of the New Mexico economy that has been booming: trade.

The state’s exports to global markets rose to $4.8 billion in 2019, a 31 percent increase compared to the previous year, according to the U.S. Commerce Department. That gave New Mexico the highest percentage growth in exports of any U.S. state last year.

That growth was largely driven by an increase in exports to Mexico, and Santa Teresa accounted for half of all the state’s exports, Pacheco said.

Yet the pandemic likely will disrupt trade with Mexco, just as trade is being affected worldwide, Erickson said.

Commercial traffic passing through the Santa Teresa Port of Entry may give an indication of that. While more than 10,000 such vehicles passed through the border crossing in April 2019, that figure was down by about 2,000 this April, according to unofficial figures cited by Grajeda.

Still, Pacheco and Grajeda pointed out that the industrial parks are faring relatively well, given the dire circumstances. Only two of the more than 60 companies in the four Santa Teresa industrial parks have shut down operations, and the majority have not laid off workers, Pacheco said.

“The other night, I got bored at the house and came to the parks at night,” he said. “All the companies that usually run a third shift at night were running the third shift. It was extremely encouraging.”

There’s a possibility of companies making permanent changes to their operations that could benefit the region.

Even before the pandemic, some companies already were considering decreasing their presence in China as tariffs increased amid the trade war between the two countries, said Chris Lyons, a developer who owns thousands of acres of land in Santa Teresa.

Now, as a result of COVID-19, they could seek to relocate closer to the U.S. market after the pandemic caused a breakdown in the supply chain and a shortage of supplies from Asia, Grajeda and Pacheco said.

“People are having to reassess their entire supply chain,” Lyons said.

Some companies that may not be willing to set up shop in Mexico could instead do so right across the border in New Mexico, Lyons said. Two medical manufacturing companies, one Japanese and the other American, are considering putting roots down there, he added.

Yet at this point, such potential advantages remain hypothetical, and they would require a commitment by the state to boost investment in infrastructure and attracting companies to the Santa Teresa area.

New Mexico has yet to do enough of that, said Sen. Joe Cervantes, the Las Cruces Democrat who represents Santa Teresa.

“Santa Teresa probably remains one of New Mexico’s greatest visions and opportunities that haven’t been realized,” he said. “Everyone talks about diversifying the economy but makes the same mistakes every year. We’re always chasing the next shiny object.”

Pacheco agreed, saying he’s been trying for years to get officials to make New Mexico’s export market more of a priority.

“I’ve felt like John the Baptist in the middle of the desert, telling people our biggest opportunity is not call centers or nanotechnology, and definitely not film,” he said. “It’s recruiting companies that can be closer to their buyers.”