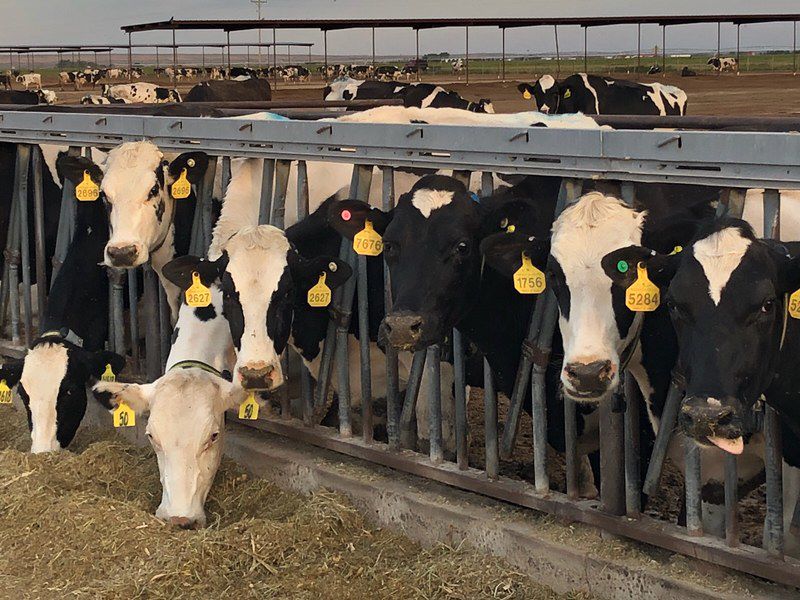 Cows feed at Three Amigos Dairy in Dexter. The New Mexico dairy industry is working to find uses for surplus milk, but the drop in demand is ‘an absolute nightmare situation,’ says Charlie DeGroot, a partner in Three Amigos. 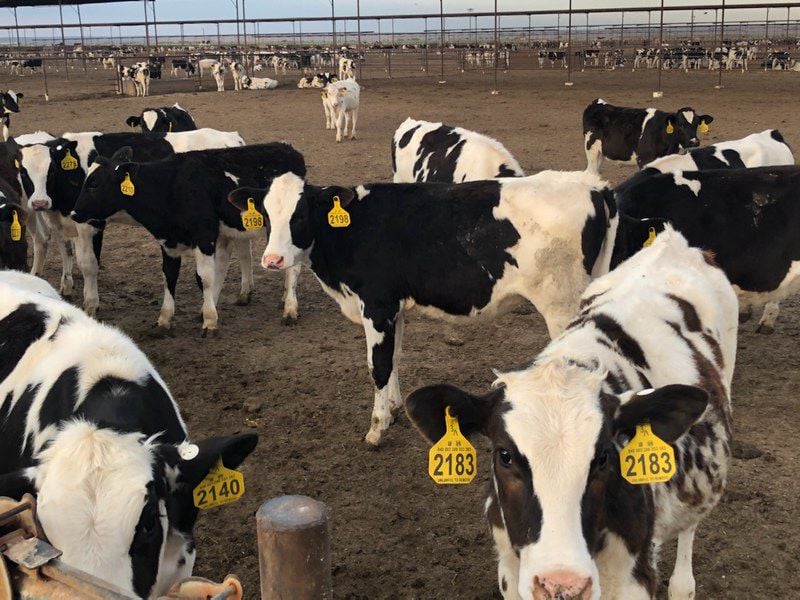 The average dairy in the state has 2,400 cows, and many the farms are losing hundreds of thousands of dollars a month, says Charlie DeGroot, a partner in Three Amigos Dairy in Dexter, south of Roswell. 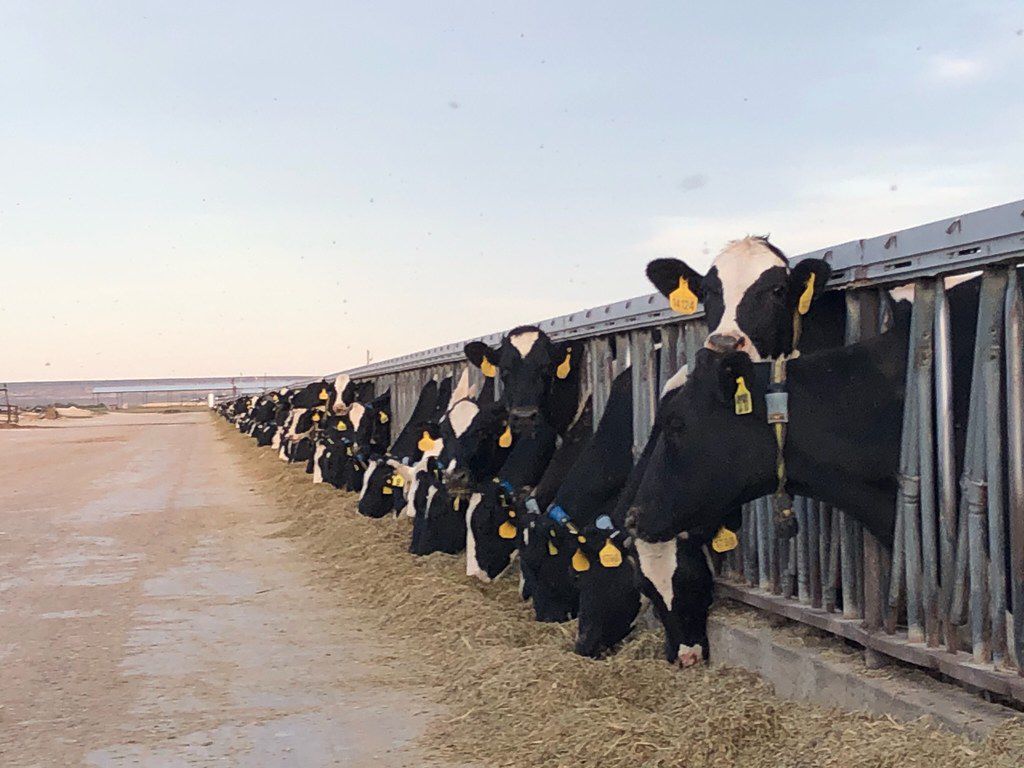 Cows feed at Three Amigos Dairy in Dexter, south of Roswell. The New Mexico dairy industry is working with state and federal agencies to find other uses for surplus milk, but the steep drop in demand for milk is ‘an absolute nightmare situation,’ says Charlie DeGroot, a partner in Three Amigos.

Cows feed at Three Amigos Dairy in Dexter. The New Mexico dairy industry is working to find uses for surplus milk, but the drop in demand is ‘an absolute nightmare situation,’ says Charlie DeGroot, a partner in Three Amigos.

The average dairy in the state has 2,400 cows, and many the farms are losing hundreds of thousands of dollars a month, says Charlie DeGroot, a partner in Three Amigos Dairy in Dexter, south of Roswell.

Cows feed at Three Amigos Dairy in Dexter, south of Roswell. The New Mexico dairy industry is working with state and federal agencies to find other uses for surplus milk, but the steep drop in demand for milk is ‘an absolute nightmare situation,’ says Charlie DeGroot, a partner in Three Amigos.

The statewide shutdown of schools and restaurants, which are large buyers of dairy products, have contributed to a steep drop in demand for milk. Facing a glut, dairy farmers are dumping mass quantities of their product just as a growing number of jobless people struggle to feed their families.

“It’s an absolute nightmare situation,” said Charlie DeGroot, a partner in Three Amigos Dairy in the town of Dexter, south of Roswell. “There’s a lot of concern about the fact that we’ve got these food lines, food banks and all of that, and milk is being dumped.”

DeGroot said he hasn’t had to dump a load yet but knows farmers in Lovington, Las Cruces and other dairy-producing areas are tossing excess milk.

“No one wants to see it go to waste,” said Beverly Idsinga, executive director of Dairy Producers of New Mexico. “For all that hard work to go to waste is heartbreaking.”

Farmers aren’t literally throwing the milk onto the ground, Idsinga said. They put it into lagoons to help irrigate pastures or crops, or they feed the milk to calves, she said.

Still, it’s milk that isn’t being sold, which hurts dairies that are already losing money as milk prices plummet, she said.

New Mexico is the nation’s ninth-largest dairy-producing state. About 140 dairies produce 8.3 billion pounds of milk, which inject $1 billion into the state’s economy, according to 2018 data.

Those numbers are certain to fall this year.

In January, milk prices were forecast, based on futures, to be about $18 per 100 pounds going into May, Idsinga said.

Then the pandemic hit. Prices are now about $12 — well below the $15 that farmers need to break even, she said.

The average dairy in the state has 2,400 cows, so many of the farms are losing hundreds of thousands of dollars a month, DeGroot said.

The U.S. Department of Agriculture has earmarked $30 billion in relief money for the nation’s dairies, he said.

The industry wants the money dispensed at a flat rate per 100 pounds of milk produced, DeGroot said. But federal officials have proposed putting a $250,000 cap on what a dairy receives, which will barely compensate for the losses of larger operations.

The pandemic has slammed an industry that already was grappling with a milk surplus, DeGroot said. Demand for beverage milk has declined for 20 years as fewer people drink milk with dinner and pour milk on breakfast cereal, he said.

Most of the milk Americans consume is in products such as cheese, yogurt and ice cream or additives in food, he said. Dairy companies now make less beverage milk, which combined with shoppers’ panic- buying has led to empty milk racks in stores.

Schools are the largest buyer of beverage milk, so shutting them down has had a hefty impact on that market, said state Sen. Cliff Pirtle, R-Roswell, who owns a dairy farm.

Restaurants closing have hurt overall dairy sales as well, Pirtle said. Plus, stores have limited how much milk customers can buy to curb hoarding, he said.

“All of those things combined have created this surplus,” Pirtle said.

To reduce surplus, the Greater Southwest Agency, made of the region’s two cooperatives, imposed a production limit on dairies.

New Mexico dairies now get full price only on 90 percent of their March volume, DeGroot said. For any milk they sell above that threshold, they’ll only be paid about 10 percent of the current price.

Cutting production is tricky because you can’t simply stop milking cows or it hurts them, Idsinga said.

Cows’ milk will dry up after about 30 days of lactation. That’s when you can sideline some to produce less milk, DeGroot said.

Meanwhile, the dairy industry is working with state and federal agencies to find other uses for surplus milk, including at food banks, DeGroot said, adding the process is much more complicated than it might seem.

Farmers can’t simply truck their raw milk to food banks, he said, because some people might have adverse reactions to the unpasteurized milk.

That milk must be processed or made into products such as butter and cheese.

However, the big challenge is reworking the long-established production and distribution system, he said.

Raw milk also has a short shelf life, limiting how much you can keep on hand, even in cold storage, and how long it can be transported, Pirtle said.

It would be more practical to convert it to powdered form, both to export and to donate, Pirtle said.

DeGroot said he believes when the pandemic passes, there will be greater opportunities for the U.S. to export dairy products to South America and other parts of the world where markets have collapsed.

“But between now and then, it’s going to be a bloodletting,” he said.

Time to step it up and come up with innovative solutions. I would think a high percentage of households would be happy to have milk, butter and cheese delivered to their door step by a non -contact milkman. Have the government subsidize the purchase of some of it to give to poor people and those who have lost their job.

The milk is dumped, but the Agora in Eldorado charges $5.00 per gallon for Creamland milk. Does this make any sense?

Just a suggestion - would the dairy farmers somehow be able to donate the milk to be used for making cheese and butter? Perhaps then the Feds could reimburse them somehow?

The cows suffer so much being factory farm animals, that to have their milk dumped is immoral. I am almost 100% vegan, but I do know that humans need to eat and in our state there are plenty of need. Humans are omnivores, so eating animals is natural. Taking care of problems like this is as important or more than fighting COVID-19.

This is one of many, many problems the stay at home order has created. Perhaps there are better ways to deal with this virus rather than destroy the fabric of out country.

Stay at home will never happen again, once everyone sees the damage it has caused.