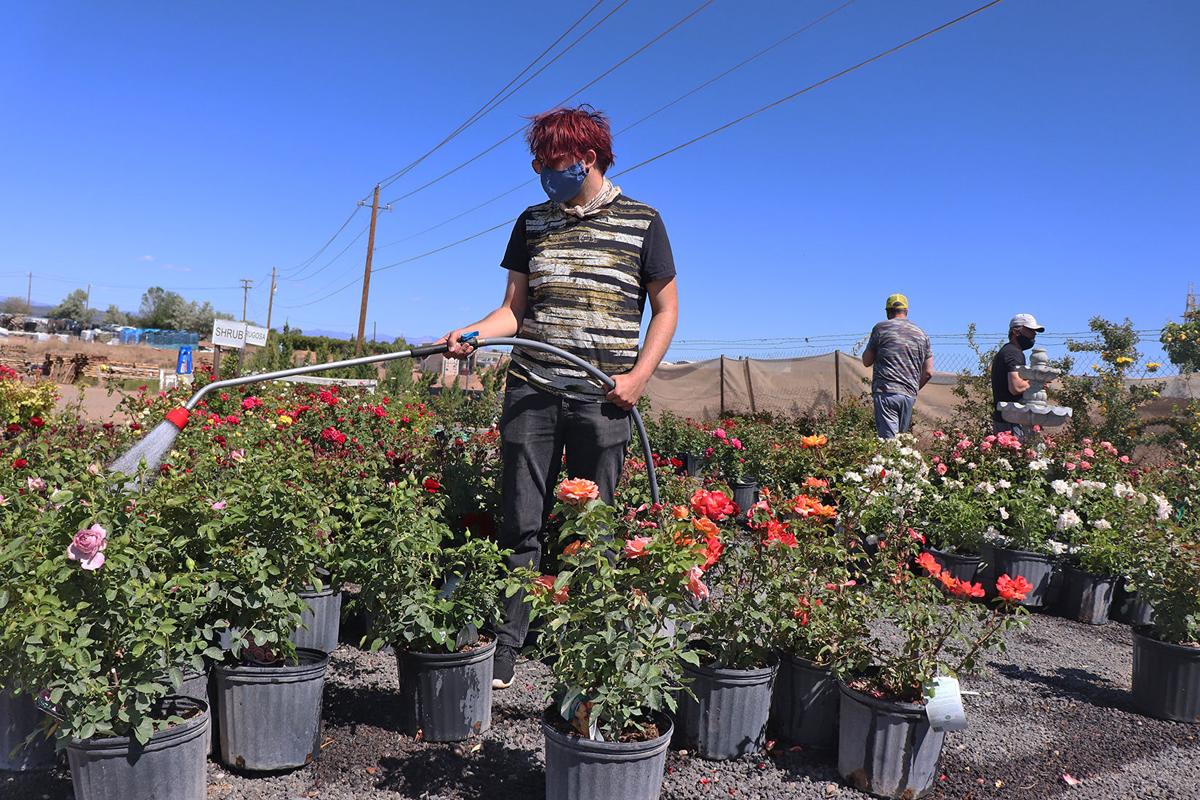 Jesse Reeves, a new hire at Newman’s Nursery, waters roses Saturday. ‘I’m about to start a graduate program in botany and ecology and wanted to try something in my gap summer,’ Reeves said. 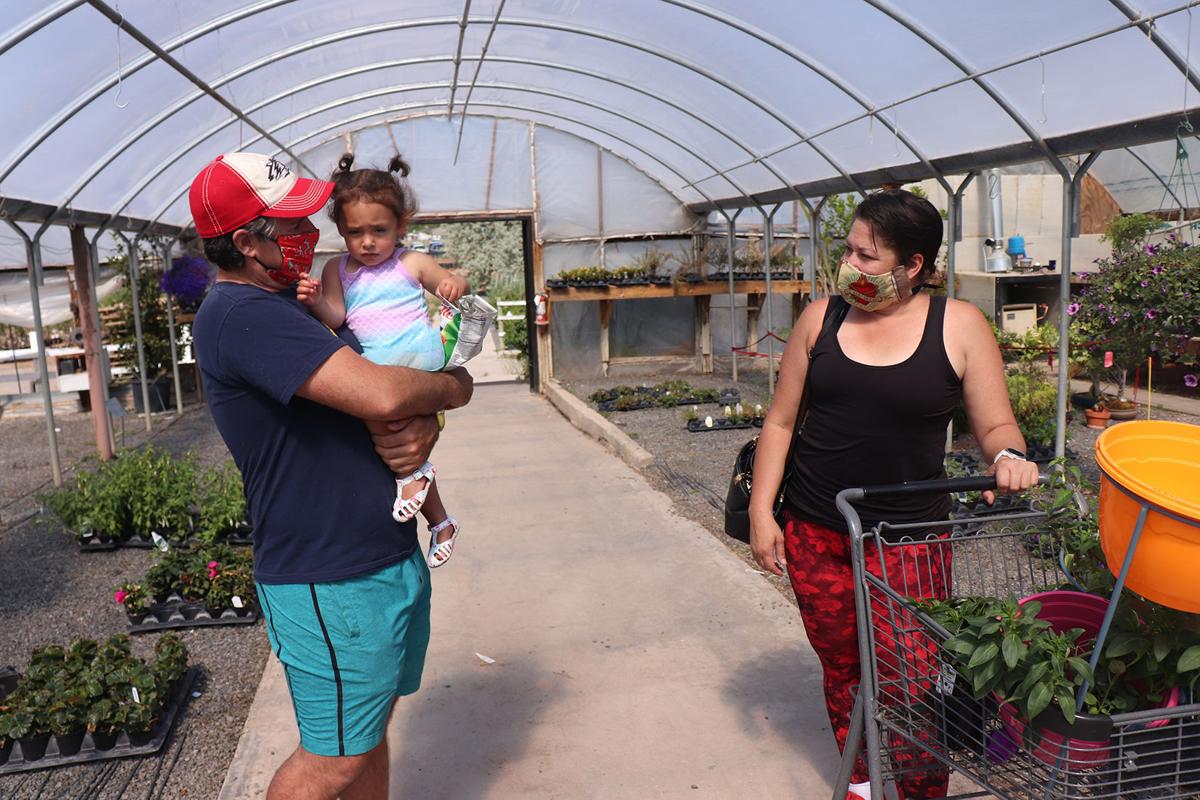 Chris, Ziadora and Jennifer Catechis shop for flowers Saturday at Newman’s Nursery on Cerrillos Road. ‘We do OK; Ziadora’s the one who gets a little stir-crazy,’ Chris said. Many Santa Fe retailers reopened after being closed for months due to the coronavirus pandemic. 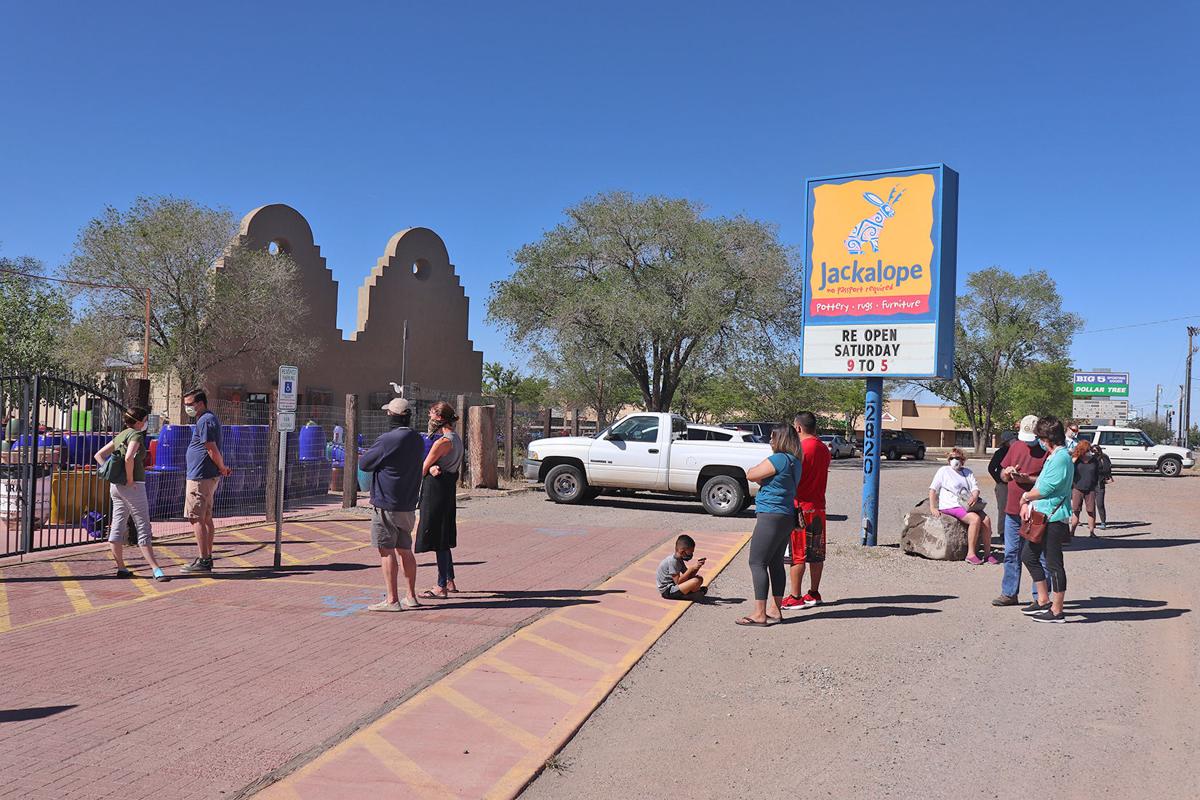 Jesse Reeves, a new hire at Newman’s Nursery, waters roses Saturday. ‘I’m about to start a graduate program in botany and ecology and wanted to try something in my gap summer,’ Reeves said.

Chris, Ziadora and Jennifer Catechis shop for flowers Saturday at Newman’s Nursery on Cerrillos Road. ‘We do OK; Ziadora’s the one who gets a little stir-crazy,’ Chris said. Many Santa Fe retailers reopened after being closed for months due to the coronavirus pandemic.

It’s back to business.

Many Santa Fe retailers reopened Saturday after being closed for months because of COVID-19 restrictions.

Jackalope on Cerrillos Road, which sells home décor and gardening supplies, had a line stretching through its parking lot for most of the day. The shop posted signs asking customers to wait outside the gate since the store’s capacity was for 10 people at a time.

Abre Martinez said she and her family waited in line for at least 20 minutes to get into the store to buy planters and roses.

Martinez said she and her husband were lucky enough to work from home but were also schooling their children, who are 15, 11 and 6 years old.

Martinez, 35, said it was the first outing outside of grocery shopping the family made, and probably the only one for a while.

“We’re not going to the stores yet,” she said. “I think it’s going to be overcrowded.”

Gov. Michelle Lujan Grisham has issued a modified public health order that allows retailers to operate at 25 percent of their maximum occupancy. It also requires everyone to cover their faces in public, with exceptions for eating, drinking and exercise.

In stores across the city, most shoppers wore face masks and were careful to maintain 6 feet of space. But fewer people wore masks on the Plaza as they window-shopped or lounged on benches.

“We’ve stayed home except for the grocery store, or a once-a-week order from a local restaurant,” Chris Catechis said.

While there were lines in some parts of town, for others, there was a trickle of patrons.

He’s gotten a few loans here and there, but nothing significant.

“We’re not giving up the ghost just yet, but it’s dire,” he said.

At A Cake Odyssey on Second Street, owners Jim and Karyn West said business has ebbed and flowed.

Jim West said the couple was grateful for support from the community, as their strawberry and rhubarb pie flew off the shelves this weekend. But the bakery has taken a hit with cancellations of weddings and other events.

“We’ve been closed for two months, so doing the refunds is quite tough,” Jim West said.

New Mexico was hit hard by the COVID-19 shutdown. The U.S. Bureau of Labor Statistics ranked the state the sixth-worst in the nation with a March unemployment rate at nearly 6 percent.

For some businesses, reopening is a difficult choice or out of reach.

Peter Wagner, who co-owns Castro Alterations on Airport Road with wife and seamstress Patricia Wagner, said the choice was difficult.

“We’re still selling masks, but we haven’t decided if we’ll open to other alterations yet,” Peter Wagner said. “If we add jackets, dresses — it might be an overload.”

Local restaurateurs said their situation looks bleak, as they wait for at least another month to reopen dining services.

“We have 54 employees and brought eight back,” said Plaza Café owner Daniel Razatos. “So, no, I don’t think takeout is helping out.”

While a loan from the Paycheck Protection Program helped the restaurant keep staff, he said it’s a short-term solution.

“I think the city should reexamine the living wage,” Razatos said. “It’s super high, and that’s going to prevent people from coming back to work. Now’s a good time to work on it.”

“We’re hoping to use the [Paycheck Protection Program] loan to give us a push-off, but our survival greatly depends if we can open our doors for dine-in,” Fukuda said.

She said the restaurant, which opened in August, was able to rehire 15 staffers who were laid off. Fukuda said the future is uncertain, but she’s determined to stay open.

“I really want to survive here,” she said. “We’ve worked really hard to establish ourselves.”

As far as Bartlett's comments. One thing business owners can do is post a sign: no shoes, no shirts, no masks, no service. Simple as that. If you want to not wear a mask, that's fine with me as long as I don't have to deal with you up close and personal. I imagine a lot of store staffers feel the same way.

The owner of the Plaza Cafe thinks this is a great time to reduce the living wage? Amazing.

I think the owner meant that the cost of living is super high, and that the living wage needs to be increased to accommodate it. I think it was just worded oddly in the article. I could be wrong, but that’s what I gleaned from that statement.

Yes, correct. That's why I will not frequent this reataurant.

The governor has taken her finger out of the dam and soon it will be impossible to stop people from operating businesses in a way that keeps employees and customer feeling safe. There is no evidence that wearing masks will help in any way and some evidence they are dangerous for some people. When the people of New Mexico realize how much damage has been done to their families and way of life, there will be a reckoning. In the meantime, live free.

@ Robert Bartlett: This is not about you. Stop being selfish.

Correct, it's about the people of New Mexico and you do not have the right to tell any one of them what risks they should take on to earn a living and take care of their families. Always, when you spout your specious rules, you seem to ignore the pain and suffering caused.

Bobby Brattles- The risk is not just to self, but to the most vulnerable in our community.

Perhaps that whole concept of community just escapes you, perhaps you are incapable of empathy and of shared concern.

Sorta like the Frumper, who seems to have that same disability. Too bad...

The answer to keeping families afloat is the type of war time effort where the Federal Government invests in our people with grants and guaranteed income. In war time, few ask about the expense, as we all know the cost of failure is unacceptable!

The other day, two young men approached my sister and niece who were wearing masks and they began to taunt them. Calling my niece and sister cowards. This conversation continued into the parking lot. Thankfully I was there and the situation was quickly resolved. If this is the new norm, then yes, there will be a reckoning. It is pathetic to know that our community has changed to this level of behavior.

I have a friend who was taunted by a woman at a gas station for wearing a mask.

I don’t think the new face mask requiring will make certain people change, if anything, just make them more rebellious and defiant. I suppose you can’t expect much from the ignorant or people with meth brain and limited understanding of how viruses spread.

Frankly, if these Santa Fe small businesses are struggling now after being reopened, they were over leveraged prior COVID-19 pandemic. Small business owners, including restaurants, tend to blame everyone else for their own demise. Fact is, 50% of small businesses fail within 5 years, with or without a viral pandemic. Best advice, file Chapter 11 bankruptcy & stop borrowing money. Connie Lopez-Lucero

@ K. Spencer: Oh, well. Go to Option 2: File Chapter 11 bankruptcy. Landlord needs to reduce their rent to assist bike shop owner through COVID-19, huh? I'd raise it instead if I were a LL.

The governor should let the stores and restaurants decide the percentage of patrons, everyone on their own can decide better if they want more or less and the patrons as well. In Business the flow seeks its own level. Just like the President let the Governors decide and the governors are letting the mayors and so on. At least let them operate at the level of Home Depot or Lowes who from what I have seen are running near capacity without the the Governors state police interfering. Again what is good for the goose is good for the gander.

What you are really saying is that each person should decide for themselves so for alt right followers, they will be cozying up to each other, without masks etc because they still believe the COVID19 is just like the flu, a hoax, etc. What a great idea for keeping the majority safe from the ignorant few!

Stefanie, you are a hoot! But I am glad I don't live in your world.

Thank you Robert. Glad there are still those in Santa Fe that are free thinkers !

PS Richard The size of the store determines the number of people inside. It is based on occupancy under the fire code. Please get informed before you make covididiotic remarks. And Newman's nursery has been open pretty much non stop since the shutdown--not sure why you covered that business or the people going to Jackalope since planters and roses were available at nurseries pretty much throughout the shutdown.

Wow. Just wow. So you would rather people go into a packed Lowe's, where the risk of infection is hi, instead of a locally owned store, where the risk is going to be much lower. When lefties start cozying up to the big corporations the world has definitely turned upside down.

From there, you goSteadily down hill....

The governor has considerably more medical resources than individual citizens to make informed decisions. In my experience, Home Depot & Lowes are very carefully monitoring their level of customers, and from the lines I have experienced, are keeping their customer in store density, far below capacity.

Do you have any idea of what you are talking about? Methinks, not!