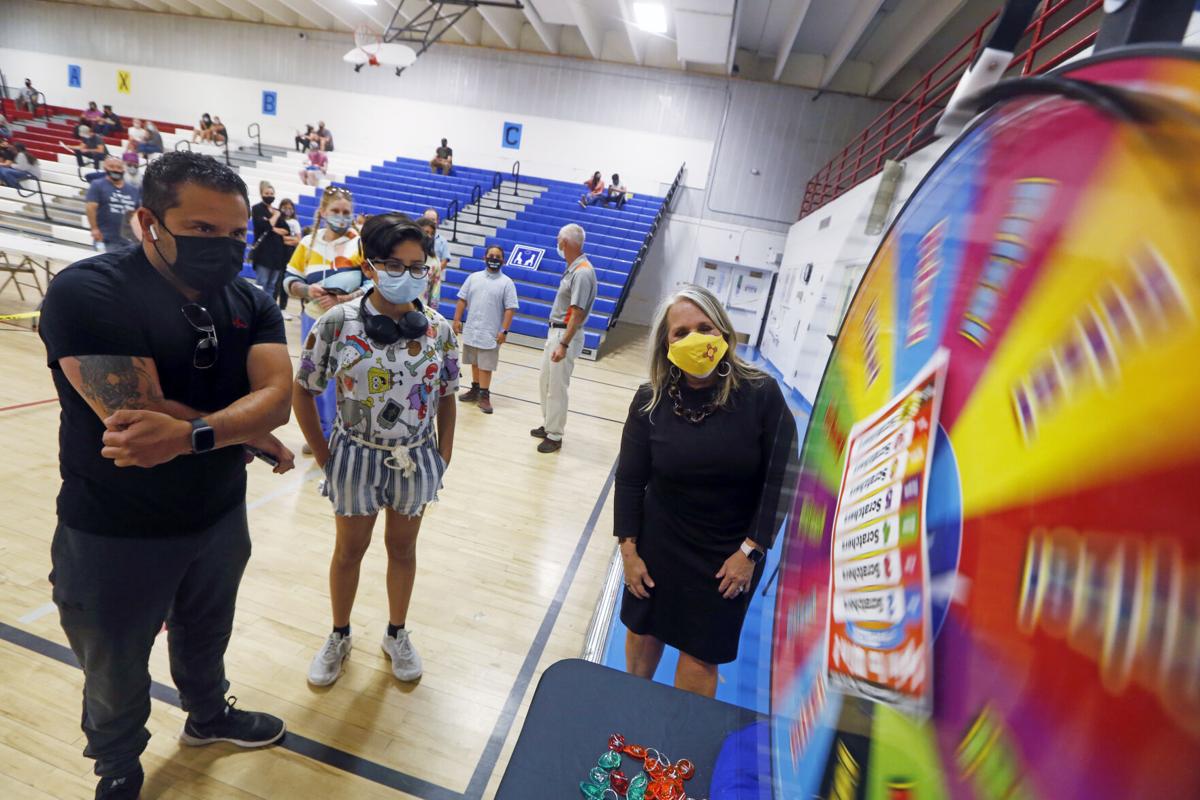 Federico Garcia and his daughter Kassandra Garcia, 14, wait to see how many scratch-off tickets they will win as the governor spins the lottery prize wheel for them Wednesday at Desert Sage Academy. 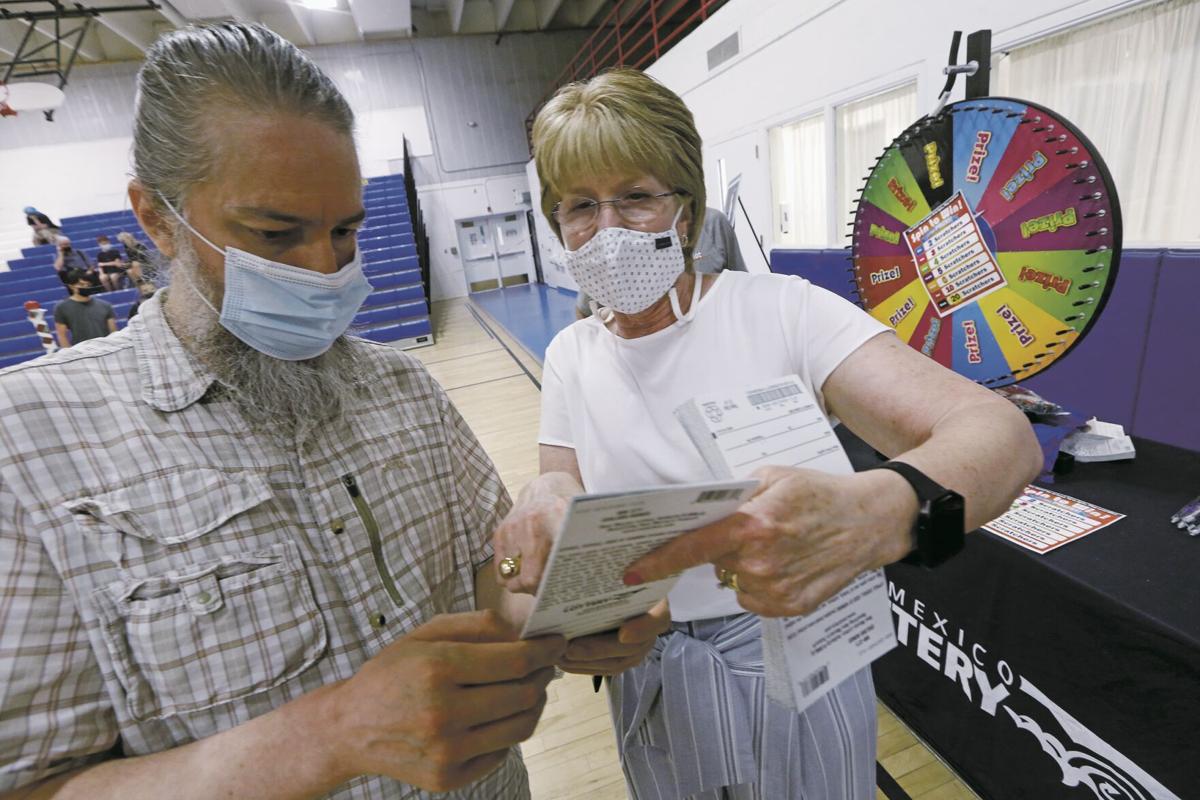 Mary Stanford with Intralot, the vendor for the New Mexico Lottery, helps Diego Pacheco of Santa Fe figure out how to tell if he has a winning scratch-off ticket Wednesday at Desert Sage Academy. 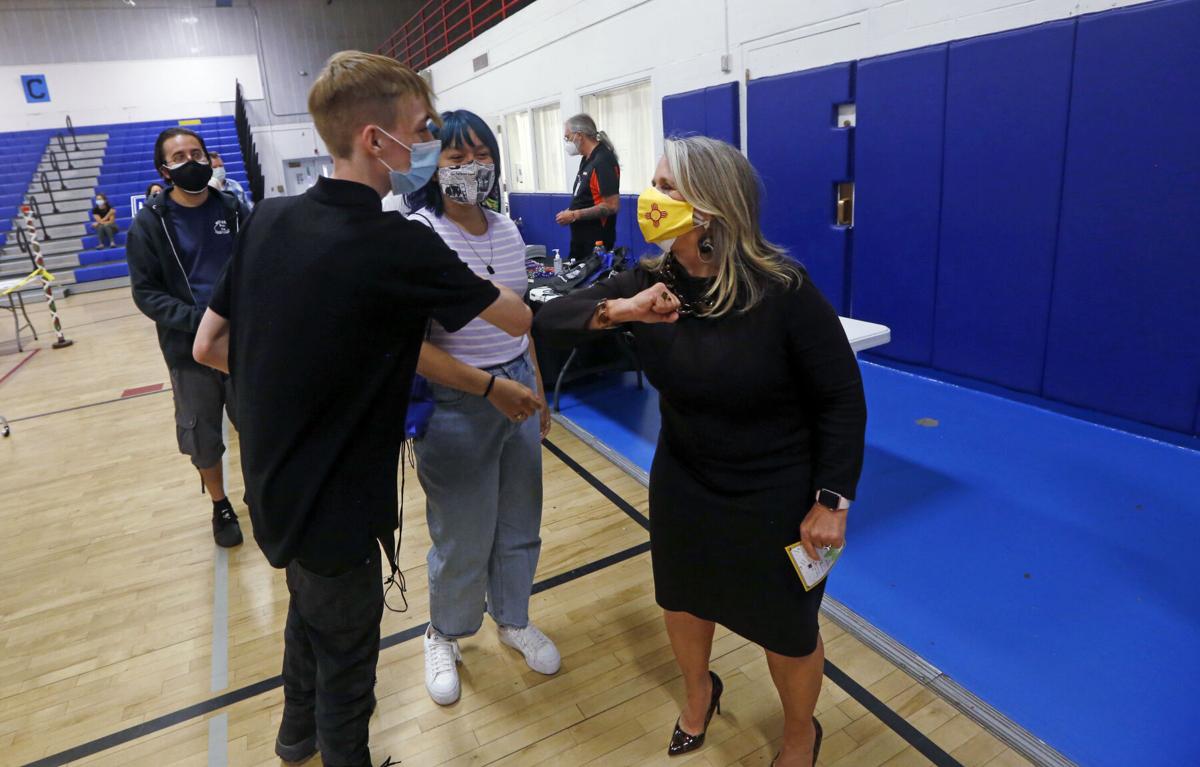 Michael Molby, 19, and Sophia Odney, 17, say hello to Gov. Michelle Lujan Grisham on Wednesday at the Desert Sage Academy vaccination site, where the governor was giving people free scratch-off tickets and entering people for a chance to win $5 million in the state’s new vaccination incentive program. 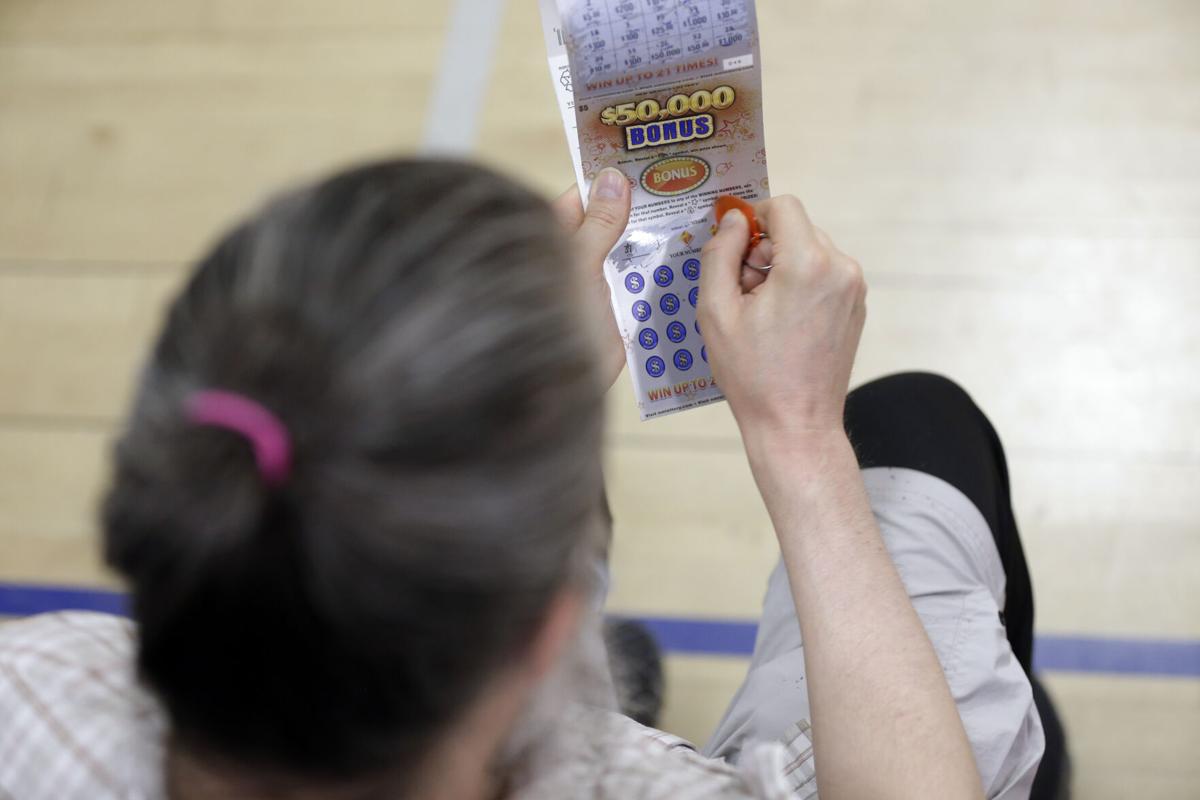 Diego Pacheco of Santa Fe scratches off the lottery tickets he won at the Desert Sage Academy vaccination site while he waits during his 15-minute post-vaccine observation period June 2.

Federico Garcia and his daughter Kassandra Garcia, 14, wait to see how many scratch-off tickets they will win as the governor spins the lottery prize wheel for them Wednesday at Desert Sage Academy.

Mary Stanford with Intralot, the vendor for the New Mexico Lottery, helps Diego Pacheco of Santa Fe figure out how to tell if he has a winning scratch-off ticket Wednesday at Desert Sage Academy.

Michael Molby, 19, and Sophia Odney, 17, say hello to Gov. Michelle Lujan Grisham on Wednesday at the Desert Sage Academy vaccination site, where the governor was giving people free scratch-off tickets and entering people for a chance to win $5 million in the state’s new vaccination incentive program.

Diego Pacheco of Santa Fe scratches off the lottery tickets he won at the Desert Sage Academy vaccination site while he waits during his 15-minute post-vaccine observation period June 2.

It wasn’t a chance to win $5 million.

But that didn’t stop dozens of people who had just gotten a coronavirus shot from getting in line to get another shot — one at winning $100 in lottery tickets.

A day after the state announced new incentives to get vaccinated, including a $5 million prize, Gov. Michelle Lujan Grisham showed up at a Santa Fe vaccination clinic to get the wheel rolling on the deal.

Acting with the enthusiasm of a game show host, the governor repeatedly spun a wheel for people who just got their first or second vaccine dose in the gym at Desert Sage Academy.

“It’s already paying off,” Lujan Grisham said between spins of the wheel, citing Wednesday data that said more than 105,000 people had registered to be in the vaccination sweepstakes game.

And more than 6,000 people have registered this week to get a vaccine — almost triple last week’s number of 2,100, said Tripp Stelnicki, a spokesman for the governor. He added that doesn’t necessarily mean the chance to win prizes played a role in the jump.

“We hope the holdouts, folks who still haven’t signed up, will be encouraged by this [offer] and sign up,” he said.

New Mexico is not the only state scrambling for ways to encourage those who haven’t yet been vaccinated to get in line. California, New York and Ohio, among other states, are offering million- or multimillion-dollar prizes via lottery tickets or drawings as well.

Other states are settling for smaller goodies. Indiana gives a box of Girl Scout Cookies, while Arkansas offers a $20 lottery ticket.

New Mexico is offering a total of $10 million, as well as in-state travel packages, hunting and fishing licenses, passes to state parks and museums, and other items.

Those who sign up to participate in the sweepstakes will be part of five weekly drawings beginning in the middle of June. The drawings will pick one $250,000 winner from each of the state’s four public health regions, for a total of $1 million in cash each week.

Plus, a grand prize of $5 million will go to one person drawn from the pool of participants in the sweepstakes. The New Mexico Lottery will handle the drawings.

In New Mexico, the money comes from American Rescue Plan stimulus funding to help states contend with the coronavirus pandemic and its effects. The Governor’s Office said Tuesday the U.S. Treasury Department last week confirmed states may use stimulus funding for lotteries, cash payments and other incentive programs to boost vaccination rates.

The governor said Wednesday she hopes the new incentives push the state over the 70 percent vaccination rate. So far, 56 percent of eligible New Mexicans have been fully vaccinated.

State Republican leaders remain critical of the initiative. In a news release issued by the Senate Republican office Wednesday, Sen. Craig Brandt, R-Rio Rancho, said the governor is using the money “to rehabilitate her image amid numerous scandals and New Mexico’s anemic recovery.”

He later said, “Giving any governor the unilateral authority to dole out billions of taxpayer dollars is unconscionable and unconstitutional. It is time for Democratic leaders to stop talking and actually push back.”

Many of the people at the Desert Sage Academy vaccination site said they had not yet heard of the incentive program and did not know the governor would be on hand to spin a wheel for some of the smaller prizes.

When they found out, some said they lined up to speak with the governor, not to win a lottery ticket.

“I got my shot to be safe,” he said. “But this is a good way to get people here. I think it adds some fun.”

Carmen Tucker, who initially was reluctant to get the vaccine, said she gave in Wednesday because she and her husband, Daniel, love to travel overseas. They’re planning a trip to Iceland later this summer.

She said the potential for winning prizes will “get people to come who wouldn’t come otherwise.”

Diana Bull, who received her first shot Wednesday, said there should be no question about getting a shot given the pandemic’s potential to kill.

“Everyone needs to get vaccinated,” she said.

Still, she acknowledged the financial inducement will turn some heads.

Despite the naysayers here, Governor Lujan-Grisham has done an outstanding job saving lives. There's no greater task for a civic leader than to protect the lives of her constituents. Well done, Madam Governor.

No matter where the wheel stops: New Mexico loses - and politicians win.

Imagine what this money could do for our schools, our children, our elderly, our less fortunate?

Unemployment needs to be cut off and get people off their butts!!!

"New Mexico is offering a total of $10 million, as well as in-state travel packages, hunting and fishing licenses, passes to state parks and museums, and other items." It is amazing to me that New Mexico, one of the poorest states in the country, is giving away this kind of money. Surely there are better and more prudent ways to spend our taxpayer money Governor Grisham! UGH.....

Looking into the future I wonder what our children, grandchildren, and their children and grandchildren, will think of us when they have to pay on just the interest of our wasteful spending of trillion and trillions of dollars. This will be our legacy to those that in some cases are not yet born. History will show their burden crossed every political party, every ethnic group, and most of all we didn't give a damned. If you have a child or grandchild look into their eyes and tell them, yes I let this happen because We wanted something for nothing. What will you say when they ask “ why did you allow the government to gamble our futures away? You even played games of spin the wheel with our futures. Why?

Umm, ever heard of Wall Street? Talk about playing games with our future. As for what we tell our children and grandchildren, we can explain how extreme measures had to be taken because some people didn't have enough integrity and honor to get the vaccine for the greater good. Something had to be done wake their conscience. You sound as if the pandemic never existed.

With as much access to the vax that is out there, my conscience is clear. People that need an incentive to take it are either against taking it or very ignorant as to its availability. The stock market is a personal investment. That money is, for the most part, not taken out of the taxing system. Most retirement systems are invested in some form or another, but when the government bails organizations out with tax dollars, that is wrong. Taking money that adds to the 30 trillion dollars national debt is irresponsible. No matter who is in office. The fed will try to print more money to put more dollars out there to compensate for the dollars the interest on the national debt takes out. This will lead to inflation and will affect everyone immediately. That loaf of bread you bought yesterday will now cost you twice that amount. It's already started. Look at gas, lumber, food, and many other products we use. This is only the beginning the worst will come by the end of the year. Then we have to pay the piper.

Wonder how much she paid for her hair and makeup for this “event”?!

What a stupid counter-productive precedent to set. This is similar to Biden’s programs to give money to people who aren’t working to the point people make more not working than they can working. Has anyone noticed all the hiring signs in town and the number of restaurants you can’t get a meal at because they don’t have enough staff? Have politicians gone insane and lost all common sense?