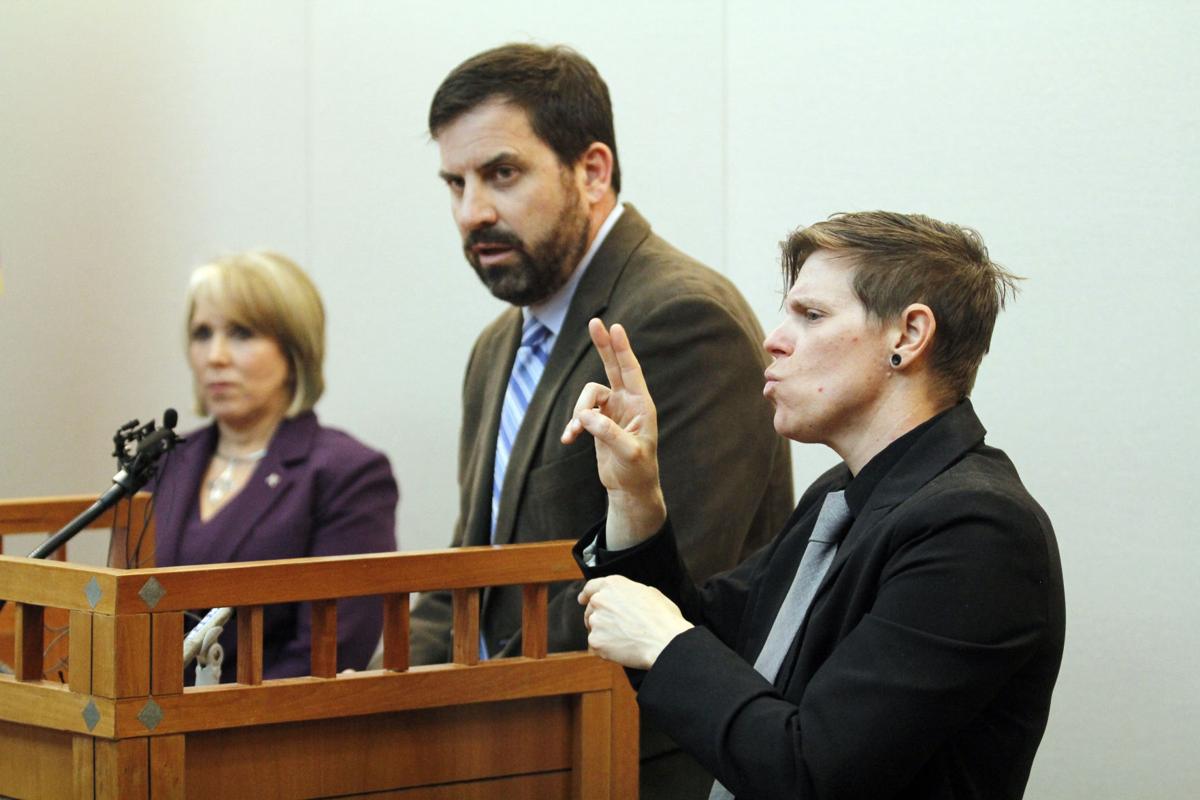 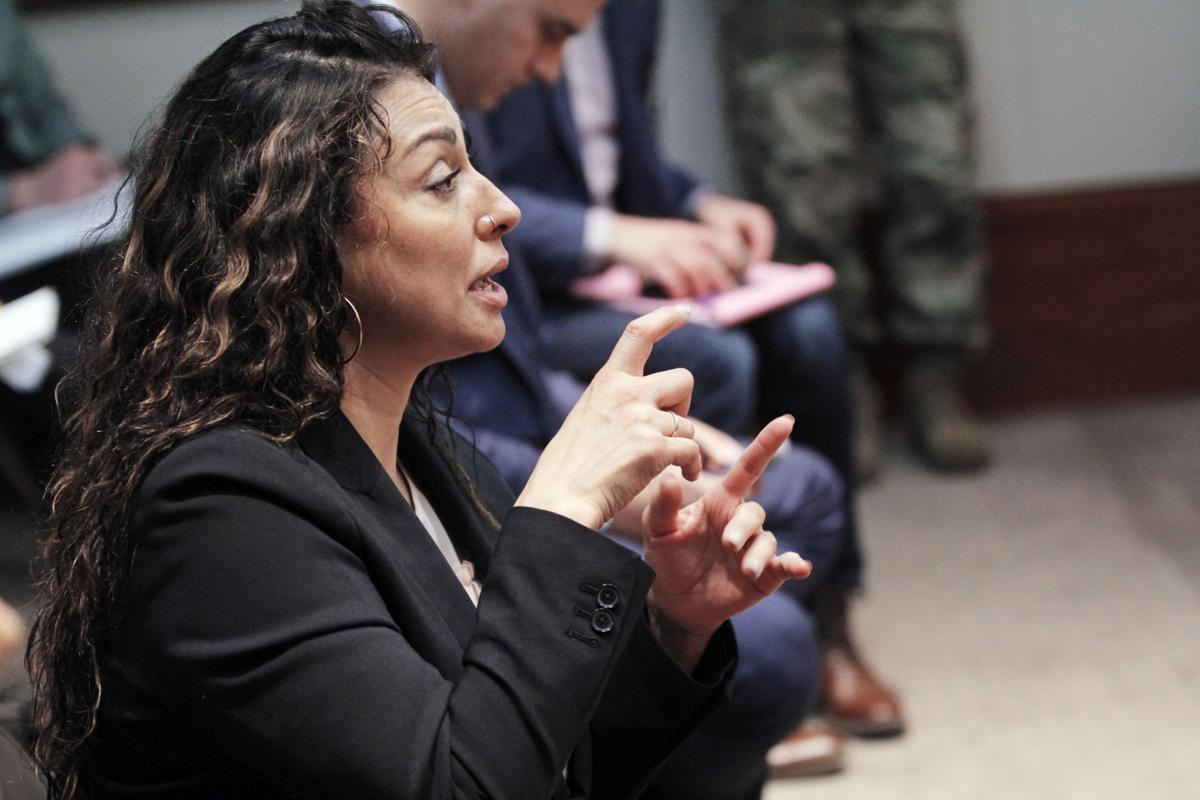 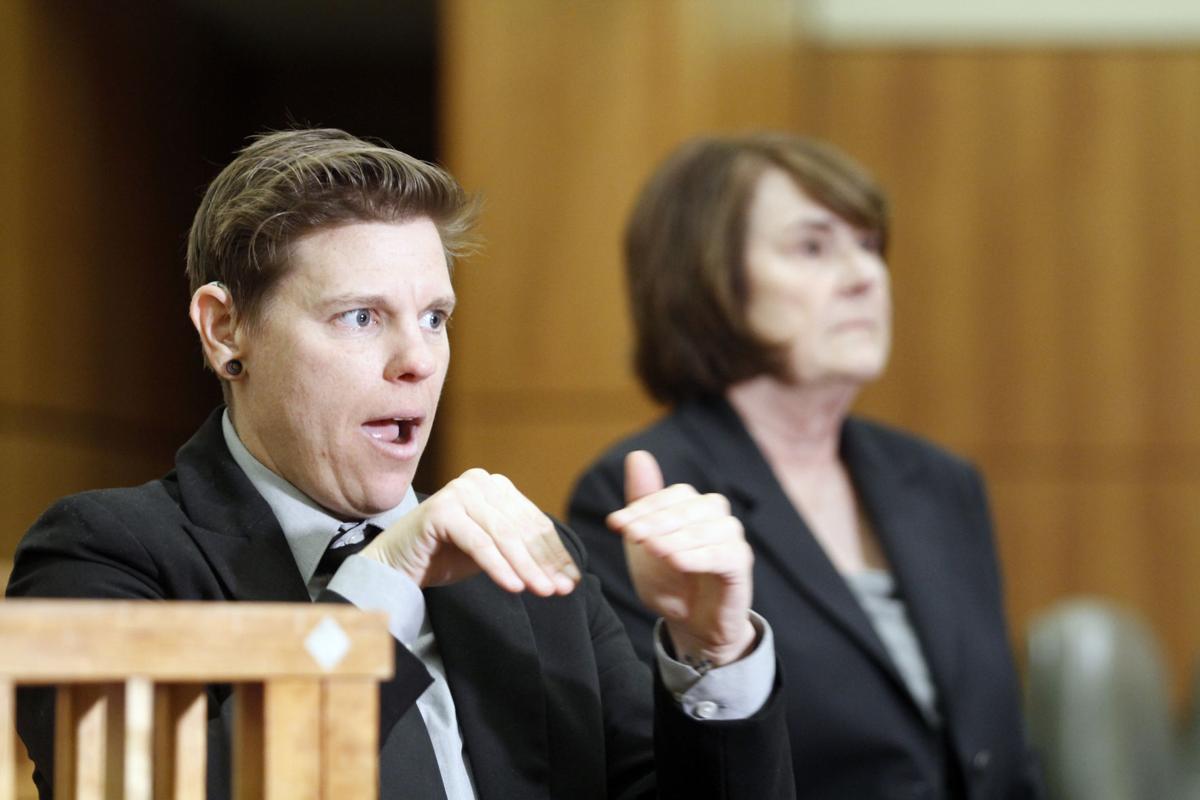 RIGHT: Eldora García, with Sorenson Community Interpreting Services, translates a news conference by Lujan Grisham in March. ‘Deaf audiences need to have whatever is being said interpreted in their first language,’ García said.

RIGHT: Eldora García, with Sorenson Community Interpreting Services, translates a news conference by Lujan Grisham in March. ‘Deaf audiences need to have whatever is being said interpreted in their first language,’ García said.

Shira Grabelsky finds it “hurtful” the White House does not provide sign language interpreters at media briefings about COVID-19.

“It is both discriminatory and also withholds information, both of which can endanger people amidst this global pandemic,” said the deaf curriculum specialist at the New Mexico School for the Deaf.

In an email, she said it also signals the White House does not care about her, “and by extension, other deaf, deaf-blind, deaf-disabled or hard-of-hearing people, and in a broader sense, others who may also not be getting information.”

It’s one reason Grabelsky said she breathes a sigh of relief when she watches Gov. Michelle Lujan Grisham’s weekly briefings on COVID-19 and sees an array of sign language interpreters on hand to explain what is going on.

The impact of having those interpreters, Grabelsky said, is significant for the deaf and hard-of-hearing community. It offers a message “there is someone who cares about our information access as well as our health and safety. Having directly received information in this way allows deaf people to make meaning of the situation and make our own decisions.”

Almost since the beginning of the COVID-19 threat in mid-March, the Governor’s Office has provided sign language interpreters. In the beginning, when they stood a little too close to her to interpret, thus breaking the social-distancing rule of 6 feet, both the interpreters and the governor took some criticism from viewers who expressed concern they were not offering the proper example.

Since then, the interpreters have moved away to a safer distance and can be seen during the governor’s broadcast, translating in small boxes in the corner of the screen.

The interpreters say their work is satisfying because it tells the many hard-of-hearing and deaf people in the state and around the country — the U.S. Census Bureau estimates 11.5 million people in the United States fall into those categories — what is happening during a national health crisis.

Their expressive interpretations, experts say, are much cleaner and clearer to understand than closed-captioned subtitles, which are often computer generated and thus may be incorrect.

“Deaf audiences need to have whatever is being said interpreted in their first language,” said interpreter Eldora García of Santa Fe, who can hear but who grew up with two deaf siblings and began learning American Sign Language at an early age to communicate with them.

Nixo Lanning, a deaf interpreter who uses a hearing partner to interpret for the governor, said she has seen closed-captioned translations go so off-base that it’s impossible to follow what is being said.

She said as she watches other public events utilizing sign language interpreters around the country, “I’m noticing a trend toward using deaf interpreters because that is the best match for communicating to that diverse audience.”

Lanning said deaf interpreters use “a lot of facial expression and body movement. … This is part of our culture. A deaf person right away, that is their native tongue, that is their natural language, so they have all the nuances available to be able to use all aspects of American Sign Language.”

According to the National Association of the Deaf, all 50 states have such interpreters in place. But though it asked the White House to hire interpreters in mid-March, the association says no such action has been taken.

Howard Rosenblum, CEO of the National Association of the Deaf, said in an email that the organization “continues to explore all possible options including political pressure, media exposure and administrative and legal avenues” to get the White House to comply.

Without directly criticizing the Trump administration, García and Lanning said they think every public or media event — including city council and school board meetings — should provide sign-language interpreters.

“It should be required for any public announcement — if it is afforded for any hearing person, they should still offer a sign-language interpreter,” said García.

As they prepare for a news conference, both interpreters said they show up about a half-hour in advance, taking time to review the data slides and learn what the major points of the discussion will be.

Usually three interpreters show up at each event so each can take breaks because, as Lanning put it, the work can be physically and mentally taxing. That’s why viewers sometimes see interpreters change in and out during news conferences.

Lanning said she “loves” Lujan Grisham’s leadership style but finds it a challenge to interpret when the governor ad-libs.

In an email that day, she added: “People say I talk pretty fast. I know I’m not easy to interpret.”

The governor said she’s grateful to the team of interpreters who “have assisted not only myself but all public officials in our state who are disseminating essential information amid this crisis. New Mexico’s public health response to this heinous virus is only as good as the information New Mexicans are equipped with — which means clear communication to as many groups of people as possible has been and will continue to be paramount. Their contributions to this effort have been tremendous.”

Lanning, who is from the San Francisco Bay Area, said her work is essential to calming fears and comprehending the many dynamics behind the virus.

“It is critical to have those aspects of information,” she said, and not just because New Mexico has a statewide school for the deaf.

“The deaf community is everywhere,” she said.

Why is the Trump administration's lack of facilitators for the hearing impair surprising? Mr. Trump himself has historically exhibited the utmost disdain for the disabled of this country. I harken back to the 2016 campaign trail when he publicly mocks a disabled journalist in a news conference. And somehow your fellow Americans elected this piece of human garbage to the presidency!