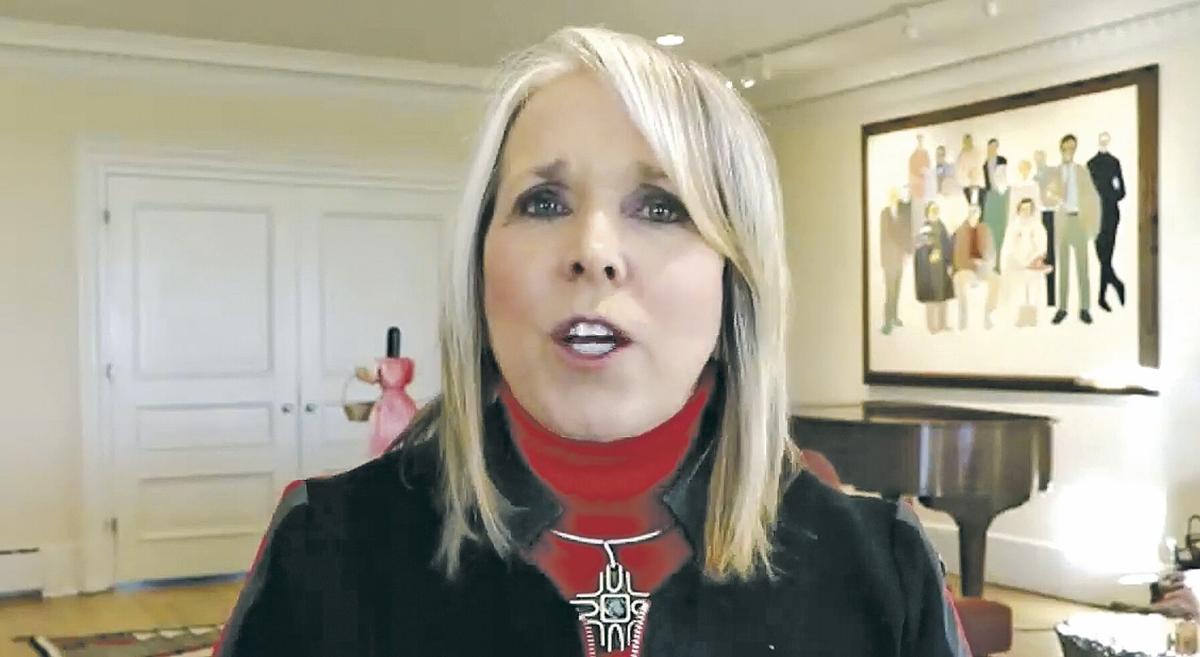 In this image taken from video, Gov. Michelle Lujan Grisham warns during a Thursday livestream that the coronavirus pandemic is getting worse, and that New Mexicans must do more to curb the spread of the disease. 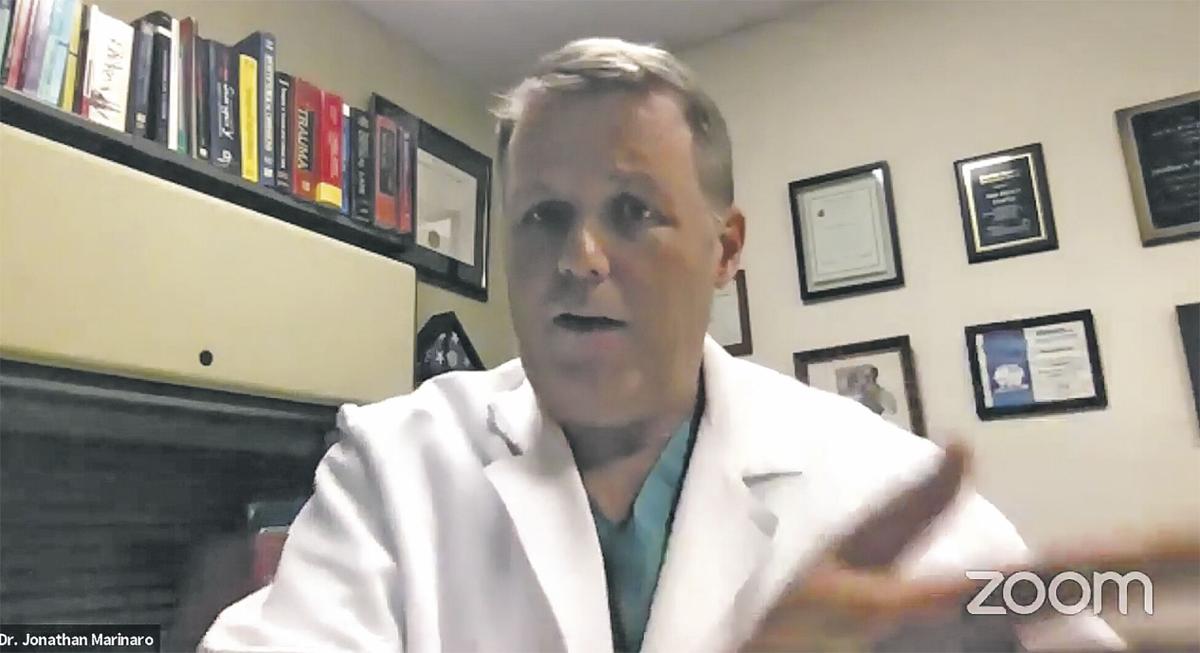 In this image taken from video, Dr. Jonathan Marinaro of University of New Mexico Hospital speaks Thursday during the governor’s news conference on the coronavirus pandemic. 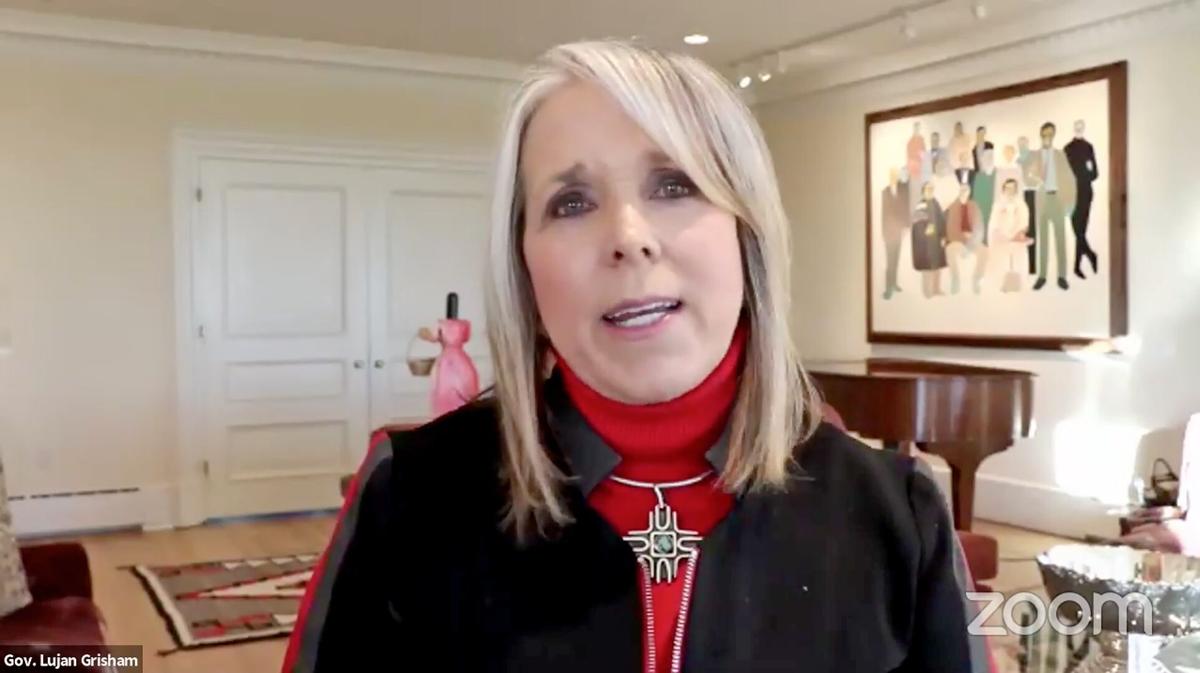 In this image taken from video, Gov. Michelle Lujan Grisham warns during a Thursday livestream that the coronavirus pandemic is getting worse, and that New Mexicans must do more to curb the spread of the disease.

In this image taken from video, Dr. Jonathan Marinaro of University of New Mexico Hospital speaks Thursday during the governor’s news conference on the coronavirus pandemic.

“The pandemic is getting worse,” it said.

Anyone who’s been paying attention over the past few weeks knows this. But the governor, faced with an exploding rise in both COVID-19 cases and deaths, remained anguished by the prospect that not enough New Mexicans are heeding the bad news, nor doing enough to curb the spread of the disease.

“We cannot get numb to that,” Lujan Grisham said. “We should never get numb to the fact that we will lose New Mexicans and their families will grieve.”

Lujan Grisham stopped short of reimposing a lockdown and restrictions similar to those in place early in the crisis. But she also cautioned they could soon come if conditions don’t improve.

“I am prepared to do as dramatic an effort to control this spread of COVID as we did early on in the pandemic,” she said. “There will be no choices except that.”

New Mexico lost more residents to the virus — 23, including three from Santa Fe — on Thursday than any day since the start of the pandemic. The state also continued to fall short of meeting five of its eight “gating criteria,” the targets it uses to make COVID-19 policy decisions.

The seven-day rolling average of new cases is now 793, nearly five times the state’s goal of 168 or fewer. Officials reported 862 new cases Thursday, after hitting an all-time high of 1,141 on Tuesday.

The state’s test positivity rate, once the lowest in the region, was 8.2 percent on Nov. 3.

The steadily worsening numbers showed no signs of letting up.

“I want everyone to understand that November is going to be really rough,” Lujan Grisham said.

The state expects to register at least 13 coronavirus-related deaths per day over the next two weeks, Human Services Department Secretary David Scrase said, calling the prediction a “very worrisome trend.”

But perhaps the most troubling news Thursday had to do with hospitalizations, which continue to climb. They increased 95 percent from two weeks ago, as general hospital beds in the state are now 82 percent occupied while ICU beds are 75 percent full.

“This trajectory is absolutely not sustainable,” the governor said.

University of New Mexico Hospital has converted areas previously used for surgery, pediatric treatment and other disciplines into COVID-19 spaces in order to try to meet the burgeoning demand, said Dr. Jonathan Marinaro.

“These volumes are enormous,” Marinaro, co-chief of the UNM center for adult critical care, said during the news conference. “Our clinical systems are extremely strained right now.”

“Patients should be comfortable being evaluated for urgent things like strokes or heart attacks, and not defer them,” Gonzales said.

But she said that if the crisis worsens, health care providers “will have to limit care.”

“Its terrible,” he said. “You just can’t imagine that you’re going to have to ration care. But that may end up happening.”

That would occur if the state’s hospitalization rate for COVID-19 reaches untenable levels, Lujan Grisham said.

“I’m seeing exponential increases in hospitalizations,” she said. “They will not be able to manage all of the cases.”

If the state’s beds fill up completely, non-COVID patients may not be able to be airlifted to other states because hospitals are packed elsewhere, the governor said.

“The United States is having a collapse of the ability to provide productive care and to protect their frontline responders,” she said.

As in previous weeks, Lujan Grisham again stopped short of taking further actions to restrict economic activity as she did earlier this year when the state prohibited indoor dining and retail activities.

Yet she said more restrictive public health orders could be on the way.

The most likely and soonest appeared to be a measure to prevent businesses from holding events with too many people. Some businesses have been ignoring the state’s ban on gatherings of more than five people, the governor said.

“I’d like to assume that was done unintentionally, and I think there may be some businesses that have done that intentionally,” she said. “We are working to do enforcement.”

Restrictions on such activity could come early next week “if not even earlier,” the governor said.

Beyond that, if New Mexicans don’t change their behaviors and adopt more COVID-safe practices, the state will make “more dramatic changes,” Lujan Grisham said. Those could include “stay-at-home orders that are very specific” and a “lockdown,” she said.

She also raised the specter that New Mexico’s 60-day legislative session beginning in January may not be able to be conducted in person.

“If you have a terrible January, I don’t see the likelihood today that you can have an in-person legislative session,” the governor said.

A special legislative session held in June was largely held in-person, although some members connected virtually.

At the end of the day, the governor said the state’s trajectory largely depended on whether residents practice social distancing and follow guidelines to slow the spread of the virus.

The governor has said the biggest problem is private and large social gatherings. How would a “lockdown” solve this problem. It’s time people take responsibility for themselves.

The Governor should have not been so complacent with all these protests. She should not be blaming us or threatening us. She was being politically correct and disregarded the virus.

You are failing miserably. Time to step down or run to DC for a Joe cabinet post in some area you are as clueless in as being Guv. Resign.

you opened the schools and you are helping spread the virus thank you for your leadership ..

Unfortunately governor you can lead a horse to water...even if you imposed the same restrictions as in the beginning it won’t matter, just as you see brain washed Trump supporters drinking his kool aide it’s the same with covid. Some of us take it serious and other don’t and just don’t care. You can’t change that no matter the restrictions. Just let this run it’s course we’ll survive but not all of us.