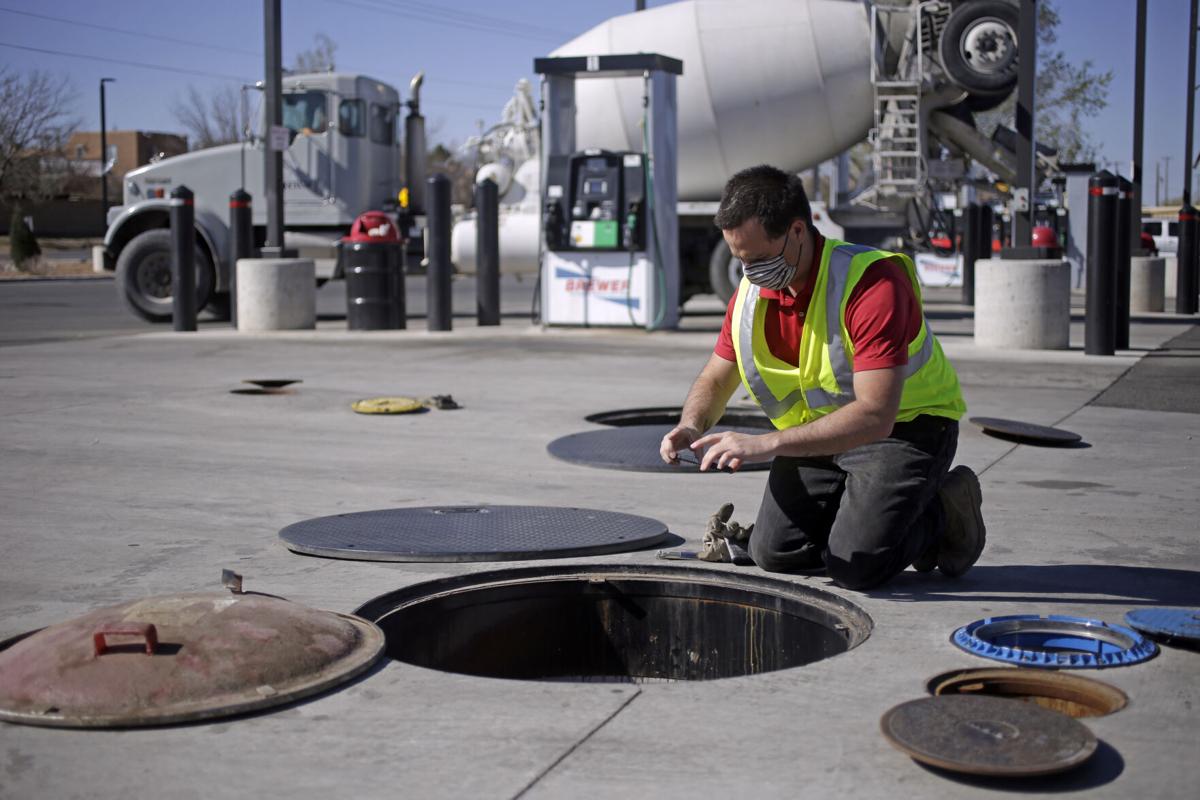 Casey Stavert, an environmental scientist and specialist for the New Mexico Environment Department, inspects the fuel storage tanks Friday at a Brewer gas station on Airport Road. The department plans to add more inspectors with a funding increase in the new state budget. 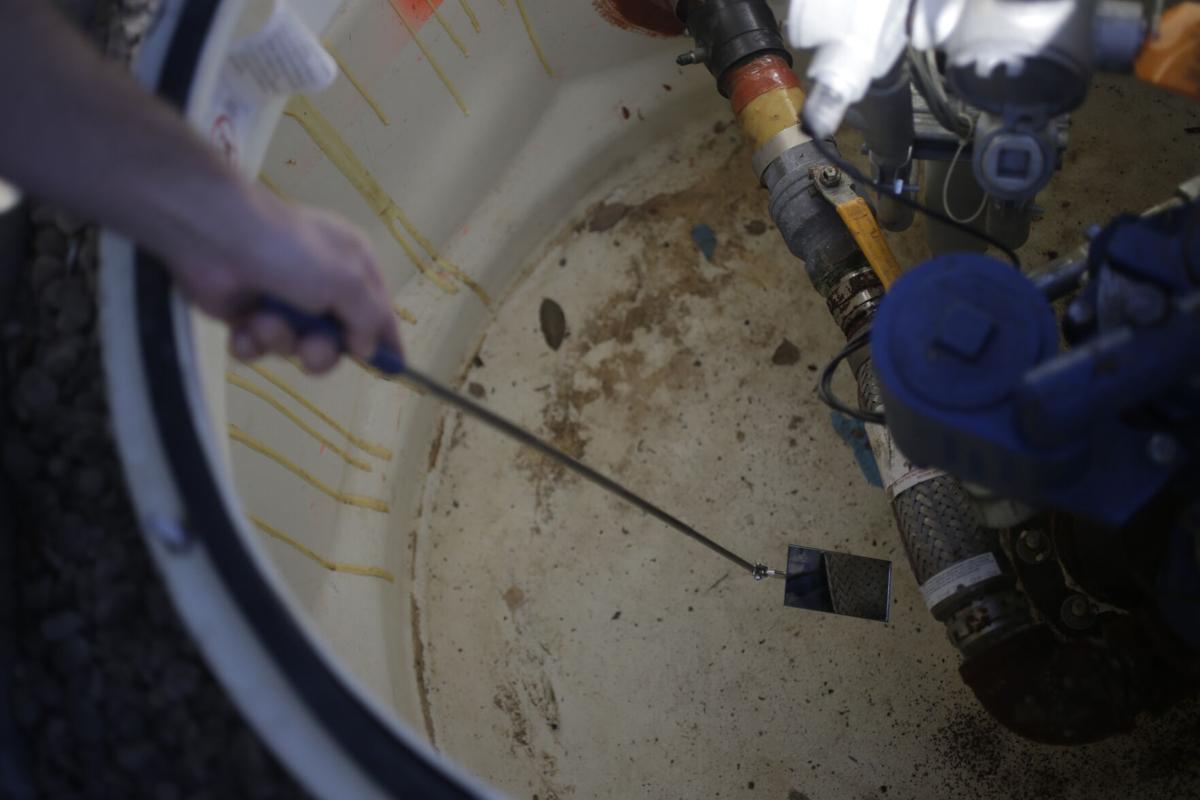 Stavert examines the inside of the fuel storage tanks.

For the past decade, the state Environment Department was underfunded and understaffed, forcing the agency to make hard choices on how much to regulate New Mexico’s air, water, food, hazardous waste and worker safety.

State regulators and activists say the crimped oversight created risks to the environment and public health.

Now a long-awaited funding boost will allow the agency to beef up staffing to inspect more sites, enforce laws, sue violators and dole out grant money.

Lawmakers approved a 21 percent boost — about $2.8 million — to the agency’s budget, plus $9.8 million for one-time projects. It was part of the $7.4 billion state budget the governor signed April 9.

The spending increase was less than the $3.7 million bump the agency requested, but state Environment Secretary James Kenney was elated nonetheless.

He has said his agency’s tight funding has limited the sites it can investigate, forcing it to pick one community over another.

“When you have the staff and the budget, you can make differences in communities more equally and across the state — which we’ve been lacking for 10 years,” Kenney said.

The agency’s budget was slashed by 42 percent during Martinez’s last three years alone, Kenney told lawmakers during a February hearing.

This year’s budget increase, combined with the smaller ones in the two previous years, will help the agency regain most of what it lost under Martinez, Kenney said.

“The agency was cut to the bone and beyond,” said Jon Goldstein, director of regulatory and legislative affairs for the nonprofit Environmental Defense Fund, a national advocacy organization. “It was very much in need of this infusion.”

Kenney expects to hire 50 to 75 people in the coming year, which he said will go a long way in filling the nearly 18 percent vacancy rate.

There will be more people to do permitting and enforcement, he said, and inspectors will be added to most of the bureaus.

He was especially buoyant about expanding the agency’s Occupational Health and Safety Bureau, which enforces federal OSHA rules.

“We’ll have more OSHA inspectors for the first time since 1981,” Kenney said. “We have occupational fatalities, amputations. Things like that they will be able to prevent versus respond to.”

Charles de Saillan, an attorney with the New Mexico Environmental Law Center, applauded the budget increase and said the agency is in definite need of more people.

“They need more inspectors across the board,” de Saillan said.

That includes groundwater laced with the carcinogenic chemicals known as PFAS — short for per- and polyfluoroalkyl substances. The Legislature also is letting the agency keep what’s left of last year’s $1 million allocation for PFAS, Kenney said.

“PFAS is a big priority topic for me,” Kenney said.

The agency also should push Kirtland Air Force Base harder to clean up a 2-decade-old jet fuel plume in nearby groundwater, said de Saillan, whose law center filed a suit against the military for the plume it says is worsening.

An anti-nuclear group expressed disappointment at the agency only earmarking $200,000 for its hazardous waste bureau, which regulates Los Alamos lab’s nuclear waste cleanup.

That additional funding will be used to hire more staffers to handle all solid waste issues, not just the lab’s.

“LANL should be a priority,” said Joni Arends, executive director of Concerned Citizens for Nuclear Safety. “More oversight is needed from the Environment Department for both the legacy and newly generated waste.”

Arends worries the lab might get nudged toward the back of the line. A recent incident in which sparks flew from a mispacked waste barrel show its operations are hazardous, she said.

Kenney said the bureau will add at least one attorney to assist in litigation, including against the lab and agencies such as the U.S. Department of Energy that manage it.

The Environment Department is suing the Energy Department for failing to adequately clean up the lab’s legacy waste generated during the Cold War and Manhattan Project.

That lawsuit also seeks to dissolve a 2016 cleanup agreement between the state and Energy Department — known as a consent order — saying it weakened the original 2005 order by eliminating real deadlines and imposing few penalties for slow or deficient work.

The goal is to have more efficient waste cleanup at the lab, Kenney said.

“Having more staff to hold them accountable and more legal resources will help us,” he said.

The agency’s funding boost follows the trend of the governor and lawmakers funneling money into increased environmental oversight.

The state Office of Natural Resources has a full staff and ample funding for the first time in a decade.

It’s an independent agency that works with the Environment Department and attorney general to assess the damage contaminants cause to natural resources and then seeks compensation from polluters.

A recent example is the $11 million settlement the state reached with the companies responsible for the disastrous Gold King Mine blowout near Silverton, Colo., that released tons of toxic waste into the San Juan and Animas rivers.

Natural Resources Trustee Maggie Hart Stebbins, who was appointed in December, said the Environment Department probes a polluted site and compiles data that her agency relies on to build a case — so if it’s better funded, that can only help.

“The fact the Environment Department has new capacity to do their part of the investigation is certainly going to benefit us,” Hart Stebbins said.

“Being put in a position where the economic crisis demands permitting but the economic crunch limits oversight and enforcement is potentially a total disaster for our air and water and community health,” Feibelman said.

In short, natural resources can’t be protected without reasonably funded agencies, she said.

Feibelman and other environmental advocates think the agency should use its greater funding to better scrutinize the state’s fossil fuel industry.

The agency can regulate the industry’s emissions, including methane and ozone, which contribute to climate change.

For years, too few inspections have been done on the thousands of active and orphaned wells, Feibelman said.

“They need to step up their enforcement substantially, and I would say particularly the oil and gas area,” de Saillan said.

The agency should look harder at oil refineries, beginning with the Navajo Refinery in Artesia, de Saillan added.

Monitoring has shown the Navajo Refinery on some days emits benzene, a toxic pollutant, at 100 times the federal threshold requiring remedial action, the Carlsbad Current-Argus reported.

Goldstein said he was glad to see the state amplify the agency’s authority along with its funding.

The governor signed two bills into law that were significant, he said. One allows the agency to set air pollution standards more stringent than federal ones, and the other lets the agency deny or revoke air-quality permits to companies with a criminal record in other states.

“The Legislature is granting them additional authority with one hand,” Goldstein said. “And with the other hand there’s also granting them the funding they need to use that authority protecting people’s health and reducing pollution from things like oil and gas.”

Kenney said aside from increasing enforcement, the added personnel will enable the agency to dispense millions of dollars in grant money and loans.

Examples are grants for recycling programs, septic systems and air quality, he said.

He noted that last year, the agency almost canceled $750,000 in grants because it lacked the staff to manage the program.

“We had the money, but we didn’t have the staff,” Kenney said.

The coronavirus pandemic led to a further drop-off in field inspections as the agency tried to practice social distancing, Kenney said. He added that agents were able to inspect remotely in some cases by combing through records and data.

As more people get vaccinated and more establishments open up, inspectors will resume going on-site routinely, Kenney said. And the budget increase means there will be more of them to do inspections, he said.

“It’s the light at the end of the tunnel,” Kenney said.

I'm cautiously optimistic... However, I've come to learn, that anytime the government is involved, "More Money" does not necessarily translate to "More Oversight".

The guy in the photo appears to be doing a "Yoda" on the hole in the ground. I want to see what he pulls up....