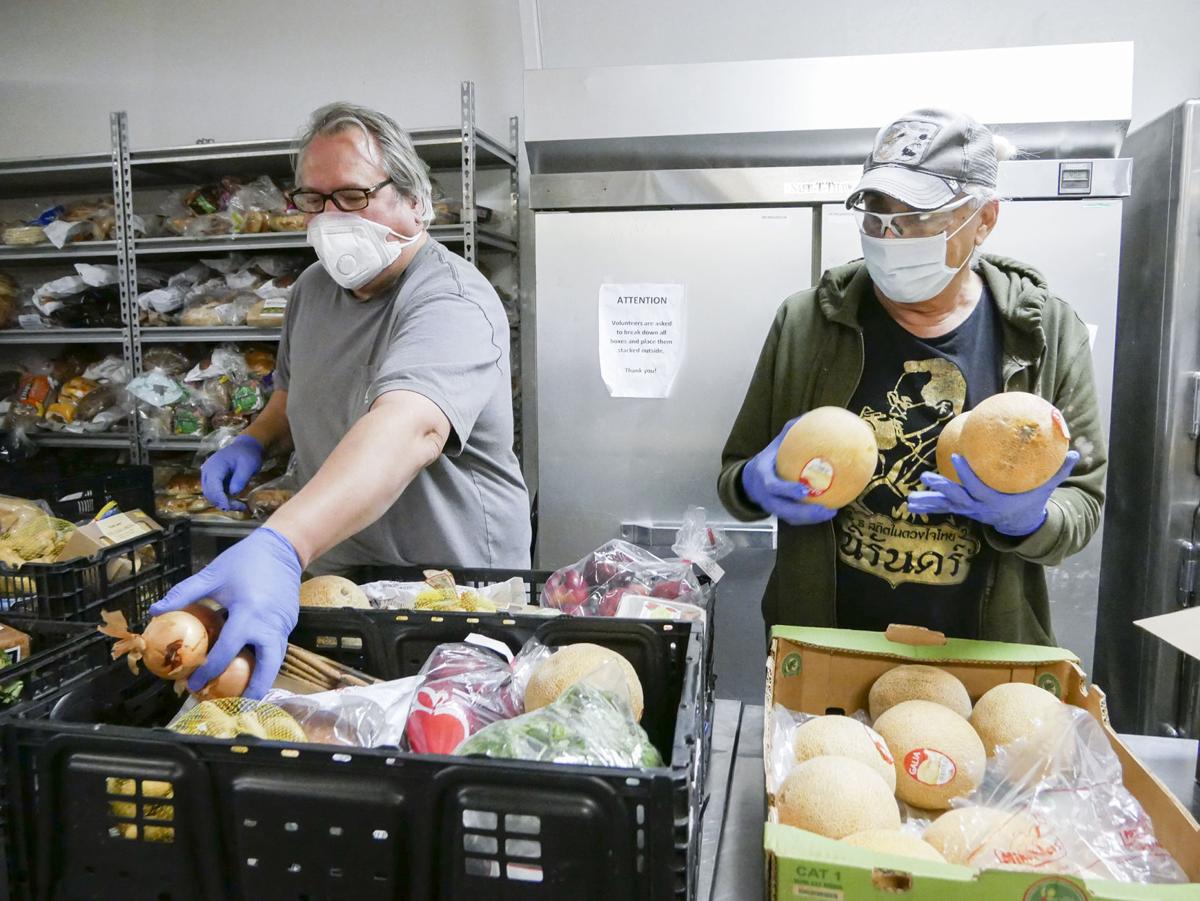 Roger Marroquin, left, and Felix Valencia pack produce into food boxes Thursday for people to pick up at Bienvenidos Outreach. 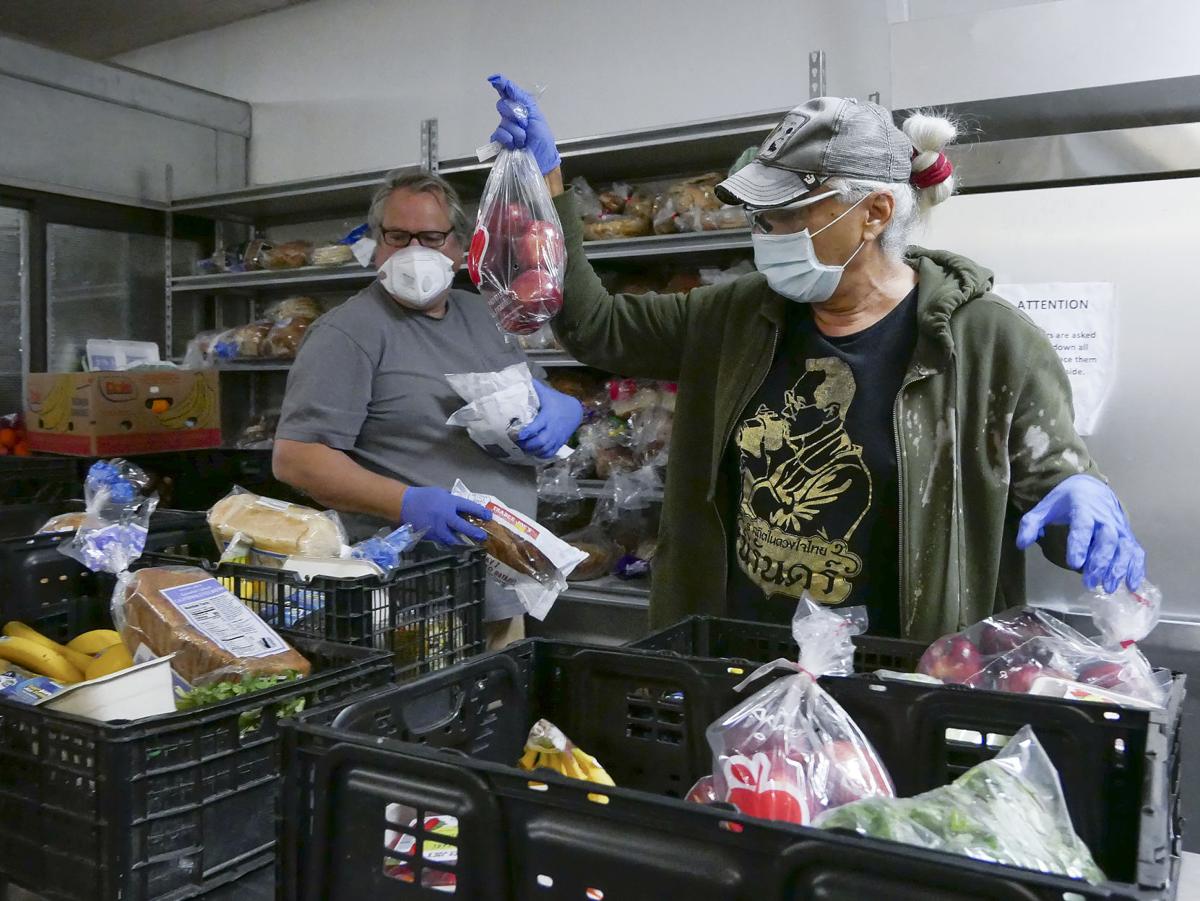 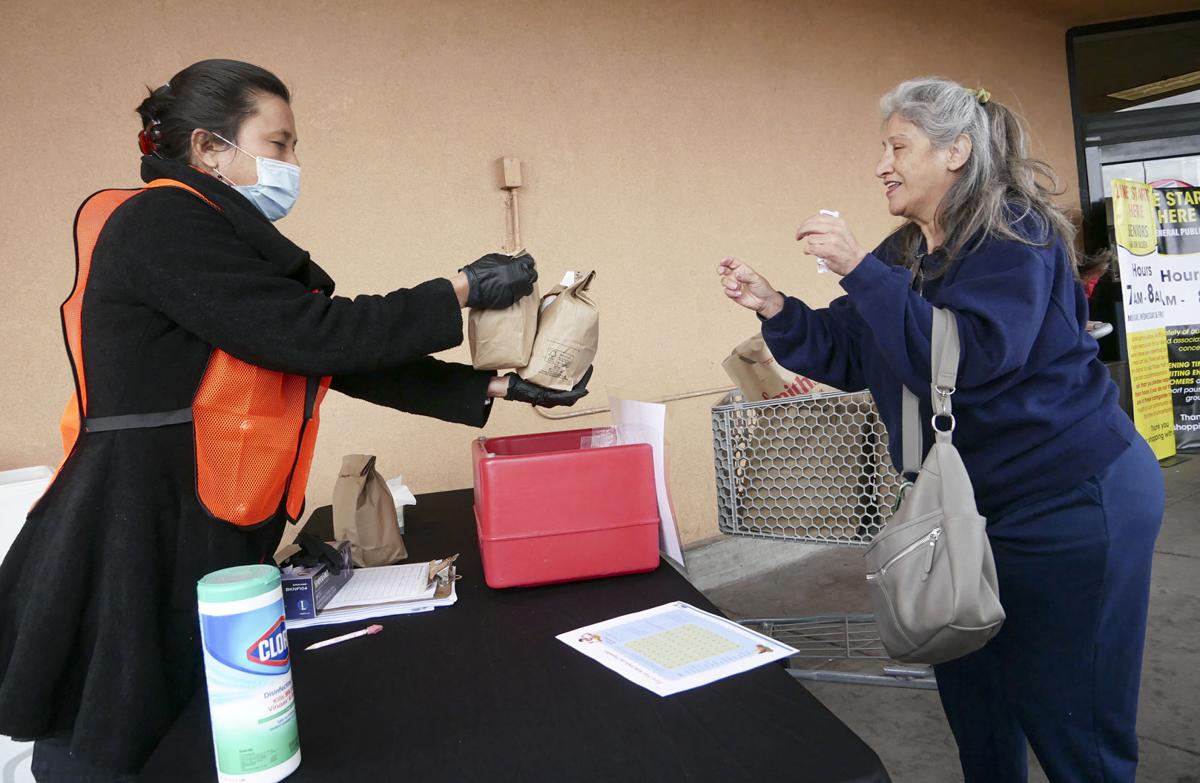 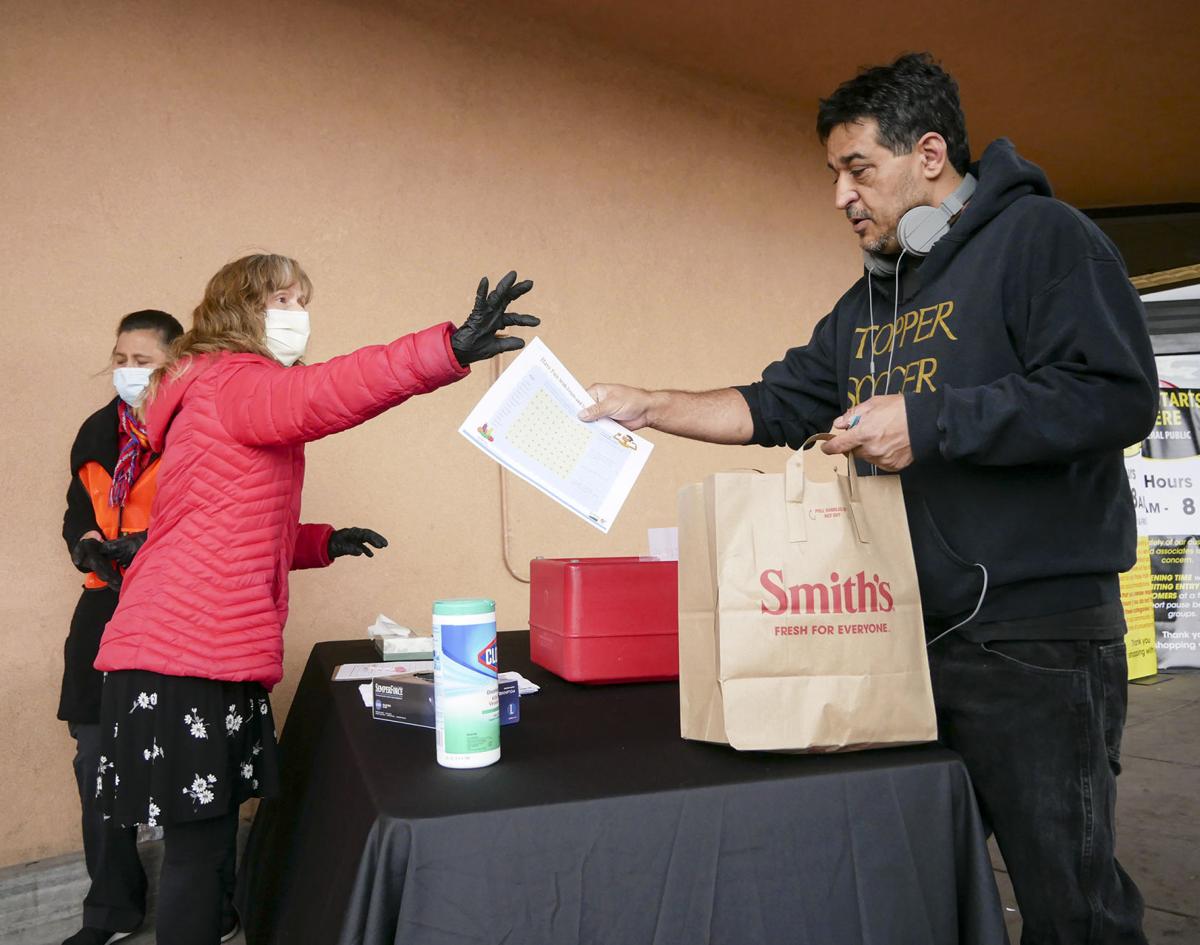 Eddie Chavez, right, receives a packet of nutrition-related activities to give to his child from Laurie Allocca, nutrition services manager for New Mexico School for the Deaf, in front of Smith’s Food and Drug on Cerrillos Road on Thursday. The school is offering free sack breakfasts and lunches on weekday mornings for children up to 18 years old. 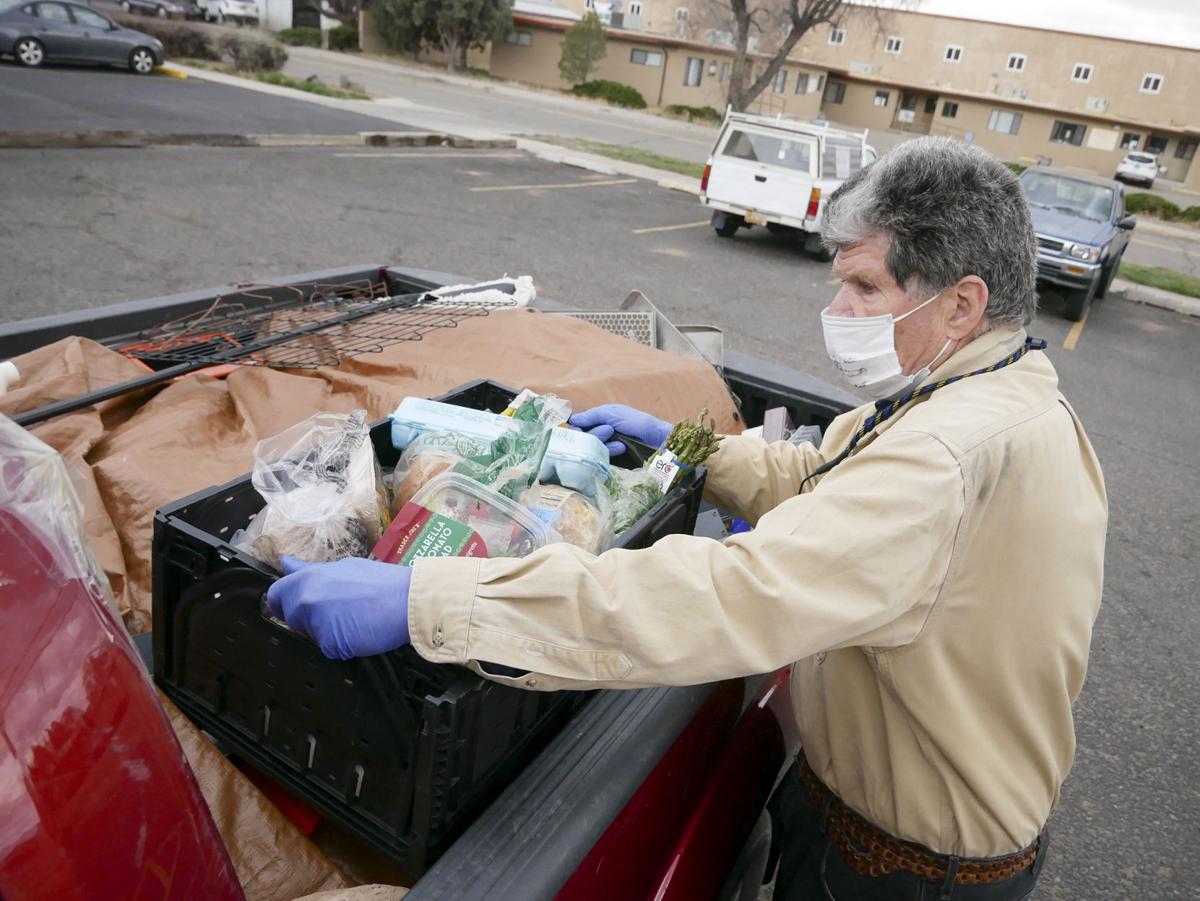 Lee Manning, a volunteer at Bienvenidos Outreach, loads a box of food into a truck bed Thursday. 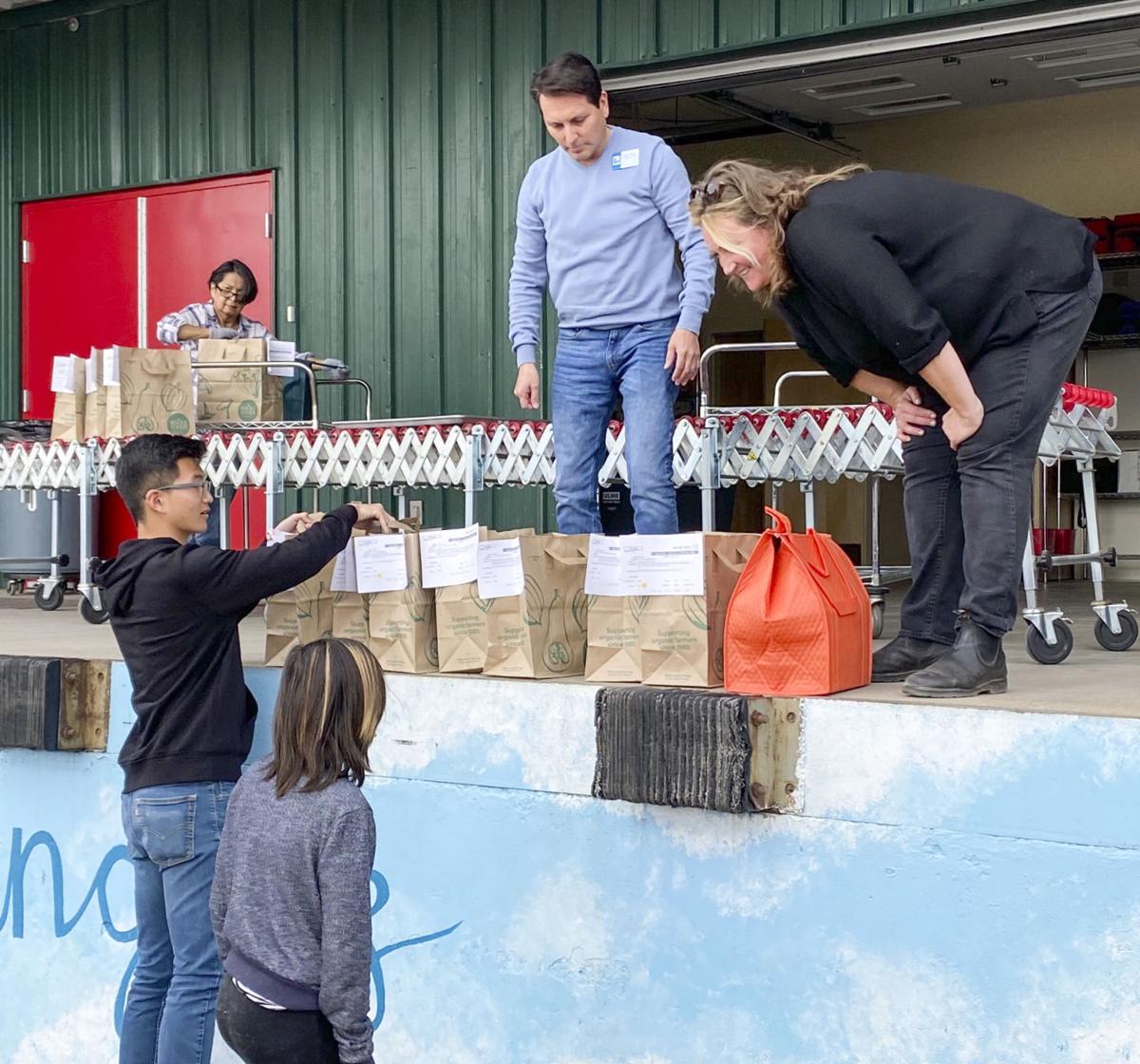 Delivery bags are picked up at the loading dock at Kitchen Angels in Santa Fe.

Roger Marroquin, left, and Felix Valencia pack produce into food boxes Thursday for people to pick up at Bienvenidos Outreach.

Eddie Chavez, right, receives a packet of nutrition-related activities to give to his child from Laurie Allocca, nutrition services manager for New Mexico School for the Deaf, in front of Smith’s Food and Drug on Cerrillos Road on Thursday. The school is offering free sack breakfasts and lunches on weekday mornings for children up to 18 years old.

Lee Manning, a volunteer at Bienvenidos Outreach, loads a box of food into a truck bed Thursday.

Delivery bags are picked up at the loading dock at Kitchen Angels in Santa Fe.

As she looked up and down Siler Road outside The Food Depot on Thursday morning, she saw rows of cars lined up in both directions — down to Agua Fría Street one way and up to Rufina Street the other.

And the people in those vehicles wanted food.

It was a sure sign of food insecurity for people now uncertain where their next meal may come from in the age of COVID-19.

“It showed they needed our help,” said Dixon, the development director for The Food Depot, a Santa Fe nonprofit that has been supplying the needy with food for 26 years.

“It can hurt your heart and lift you up at the same time,” she said. “There’s so many people in need, and it’s hard to see people in your community struggling, but at the same time, it is such a light in this darkness to see the community come together to help those people.”

Jayne Belknap saw the same sort of lines forming Tuesday around St. John’s United Methodist Church at its drive-thru food pantry. If 100 people drove away with boxes of food, another 40 did not, though Belknap and other volunteers steered those people toward other food bank entities, including The Food Depot.

Belknap understands what’s going on. The coronavirus threat, she said, has not just brought about insecurities about health and personal welfare. It’s also caused the closing of businesses and the potential collapse of the economy — all against the backdrop of a stay-at-home order to battle the spread of the respiratory virus.

“It’s a lot of panic, a lot of anxiety about what’s going on,” she said. “People are asking, ‘Where is my next meal coming from? Because I don’t have money to pay for it.’ ”

Other Santa Fe-based food organizations, like Kitchen Angels and Bienvenidos Outreach, also have seen recent spikes in requests for food.

This growing challenge isn’t just Santa Fe’s — the Washington Post last week reported such demands are threatening to overwhelm food banks and pantries around the country, particularly in urban hot spots where COVID-19 cases are increasing at frightening rates.

And job security is an issue now. New Mexico unemployment claims hit 17,187 for the week ending March 21, a twentyfold jump from the previous week, according to the U.S. Department of Labor’s weekly unemployment report.

Those people want to know there will be food on the table. “There is a food scare right now,” said Laurie Allocca, food nutrition manager for New Mexico School for the Deaf.

Standing outside the Smith’s Food and Drug store on Cerrillos Road with some 120 premade breakfast and lunch meals for children age 1 to 18, she said she sees people “in a state where they don’t think they have enough to eat.”

The public schools’ free lunch program, funded by U.S. Department of Agriculture funds, is particularly necessary when schools are closed — like now — because many students come from impoverished families and don’t get healthy meals at home on a regular basis, she said.

The demand comes at a time when many of these organizations are watching volunteers evaporate because of the crisis. It also has affected groups’ ability to hold fundraisers to keep their nonprofit organizations going.

Kitchen Angels had to postpone its planned Angels Dine Out event in late April, said Tony McCarty, executive director of the organization, which makes and delivers about 185 meals a week for people who are homebound and unable to make meals for themselves.

Kitchen Angels usually delivers these meals five days a week. But McCarty wonders if his group will have to cut back to one delivery a week.

“What’s important is to keep the flow of food going to those who need it,” he said.

McCarty said he and other leaders of food banks and kitchens are discussing ways to partner and share resources. None of them said they would run out of food. He said they just need to order more of it and hope a steady stream of replacement volunteers steps up to help get that food to those in need.

“There’s not a food shortage, nationally — it’s a matter of the trucking industry staying on track,” Dixon said. “Deliveries are a little slower than usual. [But] it’s about making sure we stay ahead of supply and keep it consistent so we don’t experience a delay.”

She said she has some concerns about client demand outpacing supply in the short run. She said her volunteers usually fill boxes with enough food that they weigh “45 to 50 pounds, but in lean times, like this, it could be half that because we only have some of the staples [canned food, pasta, etc.] on hand.”

Dixon said The Food Depot is not currently looking for food donations, but is seeking financial support and volunteers. She said her staff of volunteers is ready to ramp up efforts to feed everyone who gets in line at the next drive-thru food pickup, scheduled for 9 to 11 a.m. Saturday at Capital High School.

Belknap said volunteers at the church are doing the same thing, preparing up to 300 boxes of food for the next drive-thru event, scheduled from 10 a.m. to noon Tuesday.

Tarver said that once the city and country weathers COVID-19, people could come to see the importance of food in a different light.

“Remember when we could all go out to dinner?” she said. “The things that were important to you when things were good are not so important during the tough times.”

Going unasked; Where is the government in all this?? They proclaim a Lock Down and walk off?? It seems so. The Governor seems to think that issuing a Proclamation is all that is required. Perhaps because she's a lawyer, and the Secr of the Department of Health is a lawyer (not a doctor) they confuse reality with words. As lawyers "the truth is whatever the judge says it is". Doctor's know that is not true.

The Governor has to Wake Up; go visit a chaotic grocery store, where they pass the virus around, and actually DO something. We need Leadership, not Proclamations!! Or do we have to hire a lawyer and SUE her, a language she might understand?

No sir. What we need is people actually adhering to the restrictions for the greater good. Only been to the store once in two weeks but didn't see any "chaos" but people looking to get in and out as fast as they can. What gets me about the complainers when action IS taken is that you will be the same group that whines when we pass 1000 or 5000 cases. Wanna help stay home and stop whining.....