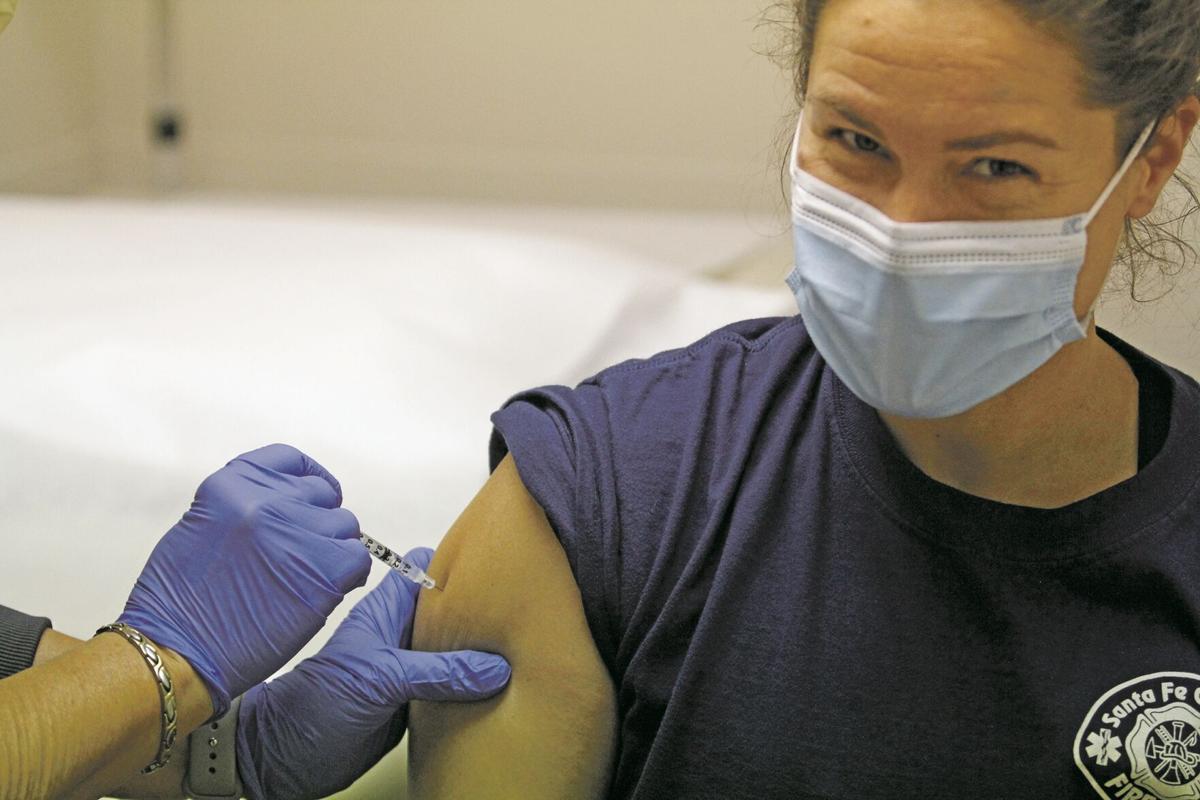 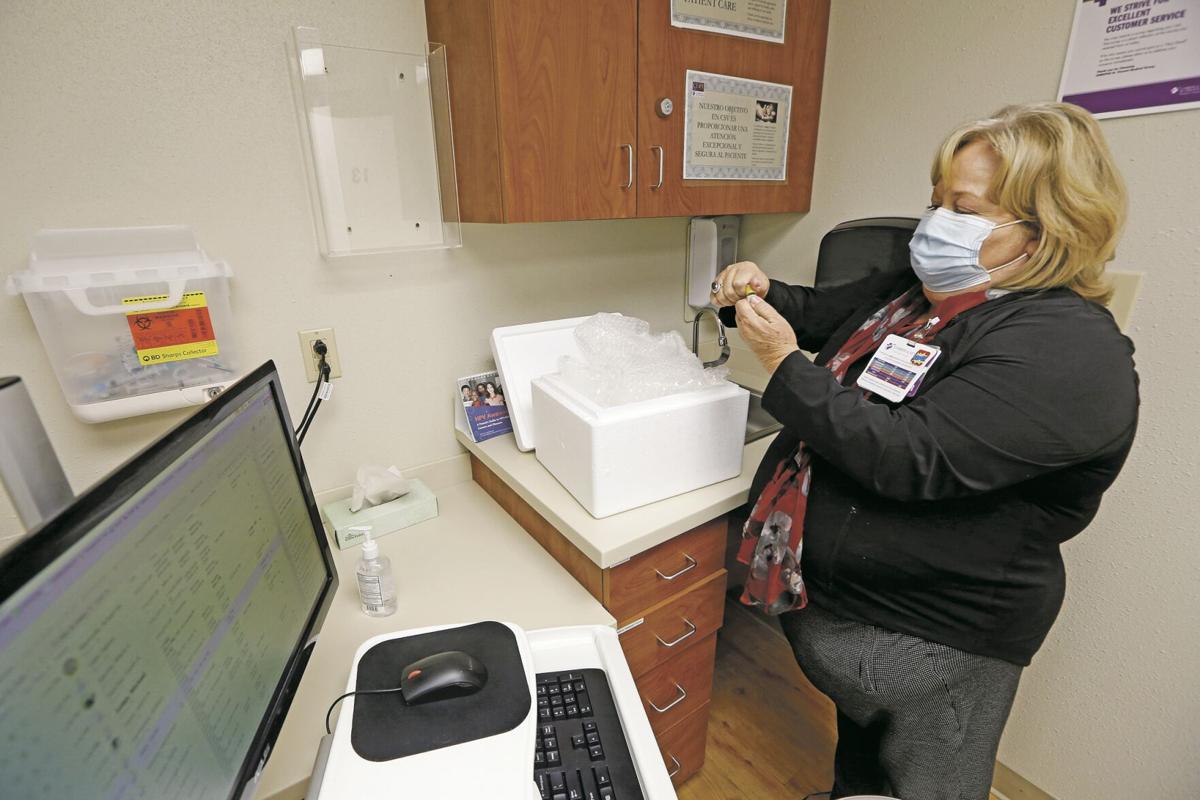 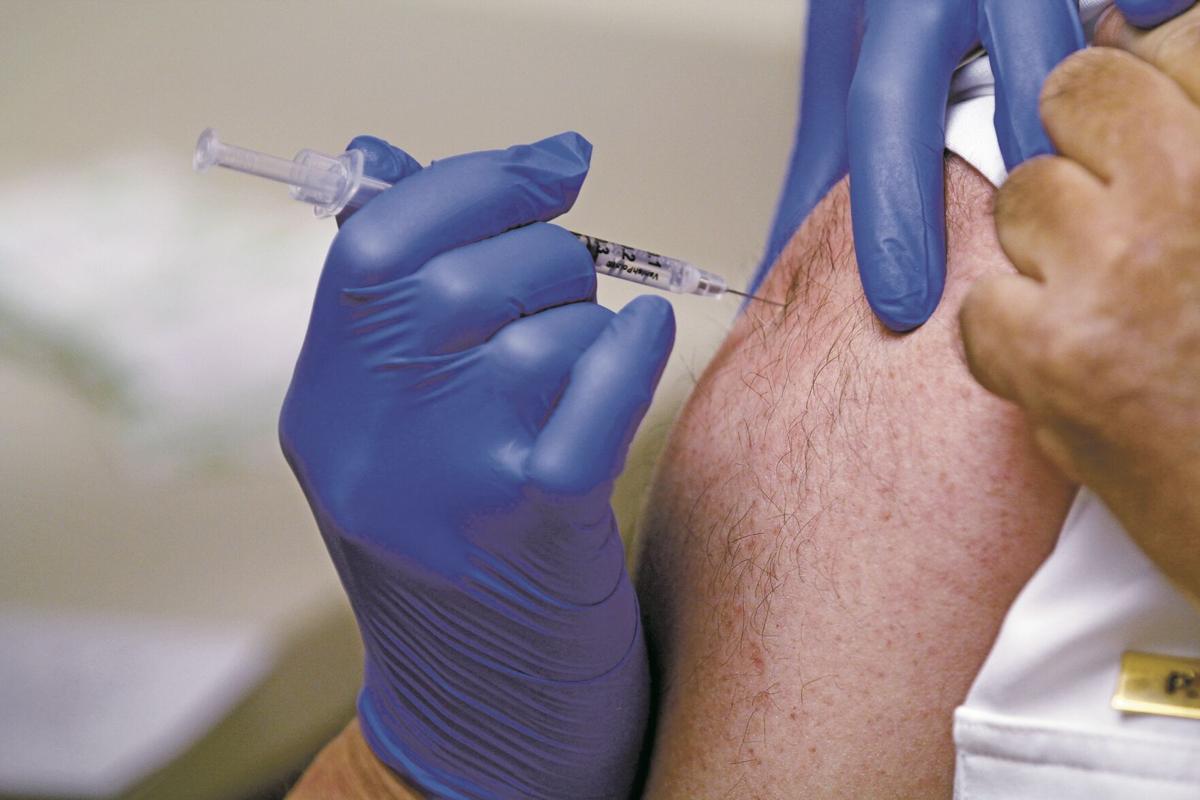 Paul Babcock, fire chief of the city of Santa Fe, gets an injection of the COVID-19 vaccine Wednesday from Alice Temple, a nurse at Christus St. Vincent's Family Medicine Center.

Paul Babcock, fire chief of the city of Santa Fe, gets an injection of the COVID-19 vaccine Wednesday from Alice Temple, a nurse at Christus St. Vincent's Family Medicine Center.

As additional shipments of COVID-19 vaccines trickle from delivery trucks to the triceps of hospital workers and others, New Mexico’s top health official said the reinforcements provide a “ray of hope” for the state.

And even more doses of both the Pfizer and Moderna vaccines will help New Mexico “move around the corner to the light at the end of tunnel,” Dr. Tracie Collins, the newly appointed secretary of the state Department of Health, said Monday.

“It’s an opportunity for us to celebrate,” she added, “but keep our eyes open for new information and what needs to happen next.”

For now, the Pfizer vaccine is being prioritized for health care workers battling the virus on the front line in hospitals. But state officials said the arrival of the newly approved Moderna vaccine will be targeted for the staff and residents at long-term care facilities and nursing homes, hard hit during the crisis.

Initial shipments of the first vaccine, created by the drug company Pfizer, arrived last week. Matt Nerzig, spokesman for Gov. Michelle Lujan Grisham, wrote in an email Monday that a second shipment — 12,675 doses — arrived Monday at Presbyterian Healthcare Services, the University of New Mexico Hospital and the state Department of Health’s warehouse. He wrote 22 hospitals will receive shipments of the Pfizer vaccine from the warehouse. The state also began receiving the vaccine from Moderna on Monday, he said.

“The overall [Moderna] shipment, when completed, is expected to total 31,600 doses and it will be focused on vaccinating staff and residents at long-term care facilities and nursing homes,” he said.

Meanwhile, CVS Health announced Monday it will begin administering COVID-19 vaccinations at more than 40,000 long-term care facilities around the country this week. Earlier this month the U.S. Department of Health and Human Services and Department of Defense chose CVS as one of two providers to administer the vaccine. Walgreens is the other.

This effort will start in New Mexico on Monday, said CVS spokesman Joseph Diebold. He said CVS hopes to provide vaccines to the general public in some 10,000 CVS pharmacy locations sometime in 2021.

Leaders at University of New Mexico Hospital, Christus St. Vincent Regional Medical Center, Lovelace and Presbyterian said during an online news conference the vast majority of their front-line workers were requesting the vaccine.

Remaining employees should be vaccinated within two to three weeks, they said. Then then have to get a second dose three weeks later.

“It’s given them a literal shot in the arm to help through this really difficult period of time,” she said.

So far, the side effects of those shots have been negligible, the health care officials said — mostly reports of sore arms and some body chills within 24 to 48 hours of being vaccinated.

The Pfizer and Moderna vaccines, recently approved for emergency use by the Food and Drug Administration, may remain the best hope for fighting the virus now “but it does not mean that our behavior regarding [safety] precautions should change right away,” said Dr. Denise Gonzales, medical director for Presbyterian Healthcare Services.

And this is no time for state residents to let their guard down when it comes to working to stop the spread of the respiratory virus, she said.

Though hospitalizations statewide fell below 800 Monday, Gonzales said hospitalizations are now “triple” what Presbyterian was experiencing in May, during an early peak in infections. If the state experiences any uptick from current levels “we may be forced to ration care and people may not be able to get the care that is needed,” she said.

State leaders and health care professionals have been bracing for the likelihood of adopting so-called crisis care standards of care by year’s end as the virus continues to infect New Mexicans.

Crisis care means hospitals would shift to an unprecedented approach in which medical resources would be prioritized for those who have the best chance of survival.

Several of the doctors said New Mexico’s growing death rate related to the virus — 2,180 as of Monday — is caused in large part by residents who had preexisting medical conditions, such as diabetes, obesity or kidney disease.

Some of those factors are embedded in a state that struggles with poverty.

“Socioeconomic conditions can determine how well you do or how poorly you do,” said Dr. David Gonzales, chief medical officer for Christus St. Vincent Regional Medical Center. “A large number of people we treat live [in places] without running water, without heat, without access to medical care … and that leads to a higher death rate.”

Meanwhile, it will take some time before enough doses of the vaccines will be available for the state’s residents, Denise Gonzales said.

“We are a long ways away from having the entire population of New Mexico vaccinated and immune,” she said.

Why no mention of the over 75 people :

[ohmy][ohmy] Ooops. Vaccinations are injected in deltoid muscle, not triceps.

COVID deniers like Lindsey Graham and Marco Rubio were also among the first to be vaccinated.

Ben Ray Lujan and 30 year old AOC made sure they were at the front of the line the least likely to get sick, we need to get the front line people first then the 58 million elderly. Selfish

These politicians haven't a clue what leadership means.