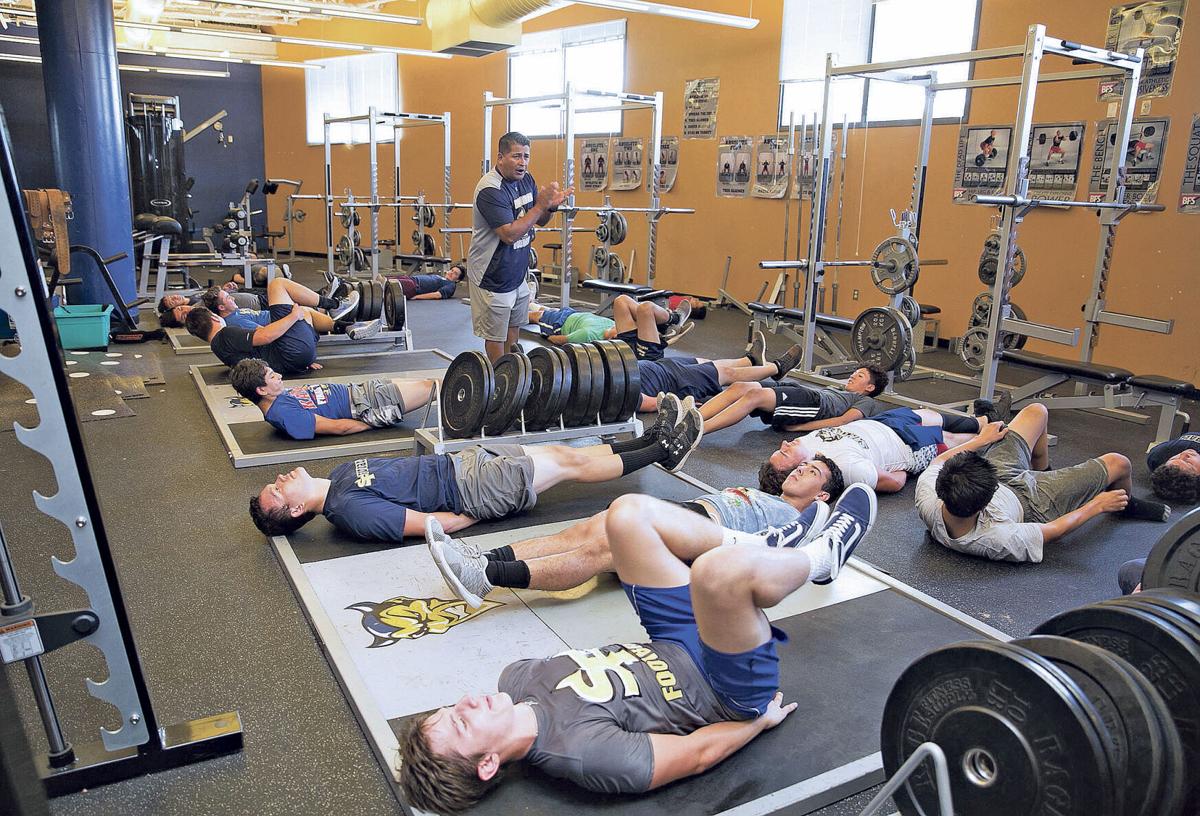 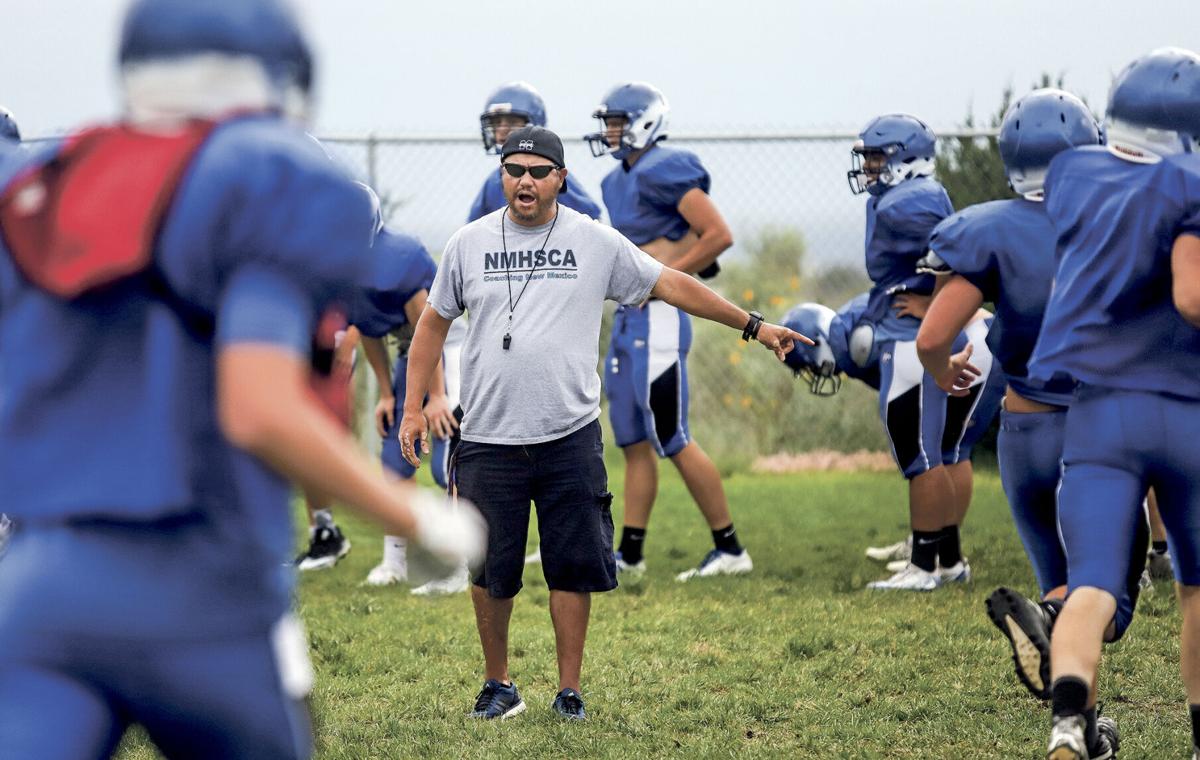 St. Michael’s head coach Joey Fernandez at practice in August 2018. Hernandez says his players have been eager to hear news of when they can resume training. 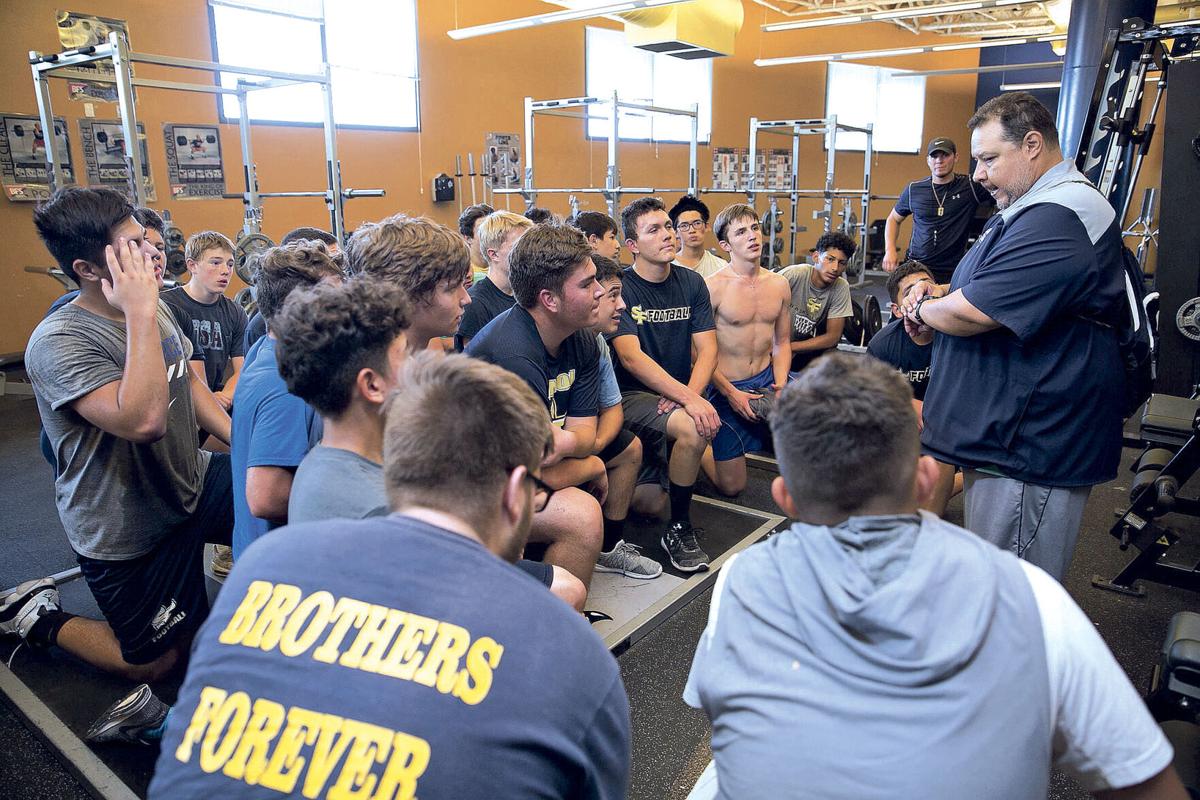 The Demons football team wraps up an early morning practice and huddles in July 2018 to listen to coach Andrew Martinez at Santa Fe High School. 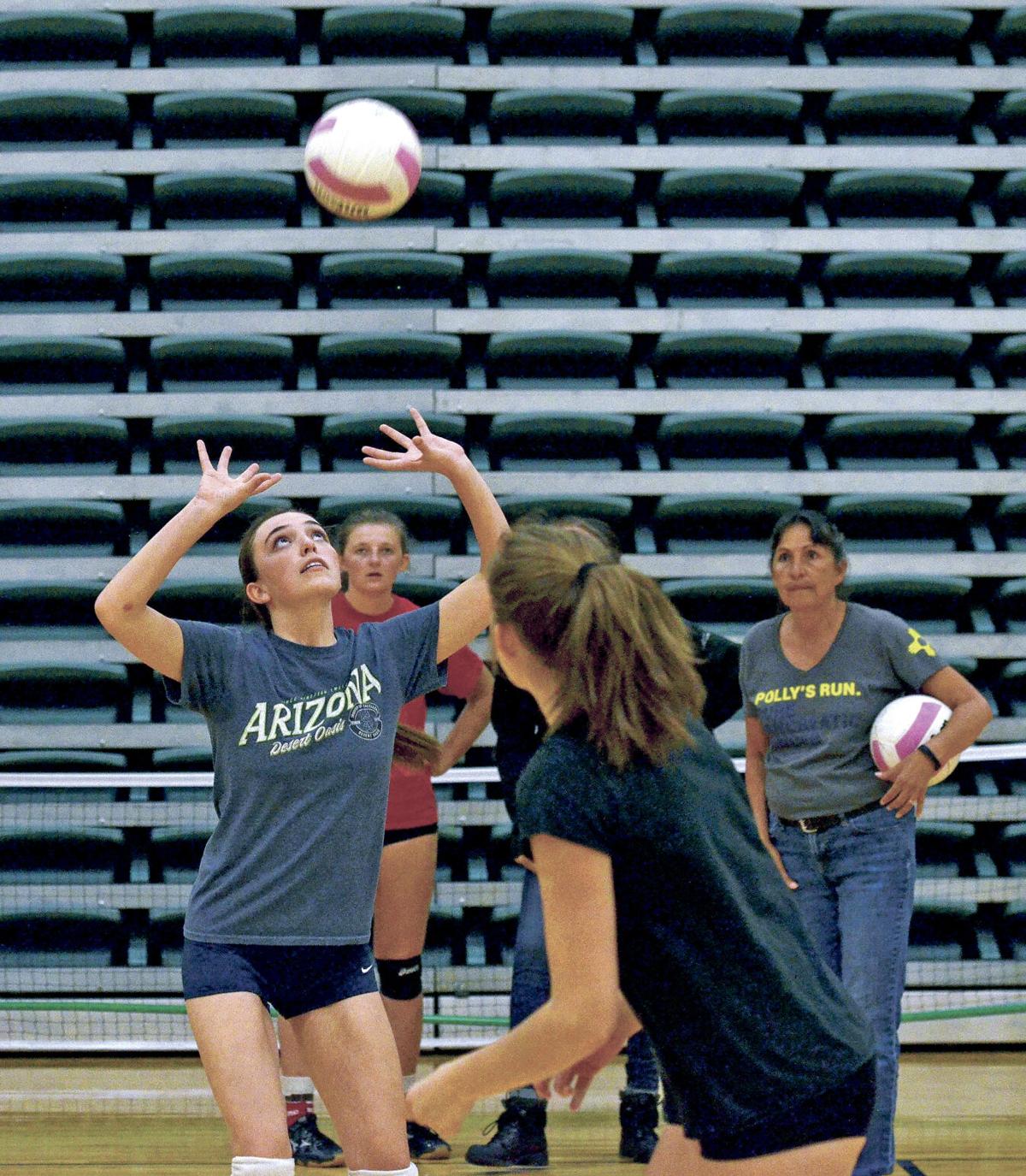 St. Michael’s head coach Joey Fernandez at practice in August 2018. Hernandez says his players have been eager to hear news of when they can resume training.

The Demons football team wraps up an early morning practice and huddles in July 2018 to listen to coach Andrew Martinez at Santa Fe High School.

Chela Butler does not see her athletes at Monte del Sol as “test subjects,” but she acknowledged a lot is riding on their shoulders this summer.

As New Mexico schools begin devising plans to reopen later this year, it may be the athletes who dip that first toe into a very intimidating pool — one filled with COVID-19 fears.

Butler, the head volleyball coach and athletic director at Monte del Sol, relayed a recent conversation she had with Robert Jessen, the school’s head learner, about the upcoming start of summer workouts for student-athletes across the state amid the pandemic. The New Mexico Activities Association, which oversees athletics and activities in the state, announced last month all teams could begin preparations to play for the 2020-21 school year June 15, providing a plan that adhered to health orders from the Governor’s Office.

While coaches and athletic directors saw the start date as a step forward in restoring a sense of normalcy, administrators like Jessen saw it as an opportunity to see whether in-class instruction also is feasible.

“He wanted to impress upon our programs that this is the beginning of what we are going to look like in August,” Butler said. “If we didn’t do it well, if we didn’t adhere to social distancing and some of the guidelines that were put forth [by the NMAA], we will never get out of Phase One and we won’t have a season.”

So, the grand COVID-19 experiment begins, with sports as the canary in the coal mine.

Some coaches believe their athletes are ready for what lies ahead.

“Most of the kids I’ve talked to are like, ‘Coach, whatever it takes,’ ” Española Valley head girls basketball coach Joe Estrada said.

Whatever it takes, though, won’t be easy.

Normally, the NMAA does not oversee summer activities for its 160-plus members. It is often left to individual schools — and the coaches of each sport, in particular — to develop their own plans, from implementing workouts to attending camps and tournaments to get athletes ready for the upcoming season.

The COVID-19 pandemic changed the way high school sports worked in New Mexico, disrupting the final 2½ months of the school year and the spring sports season. Even athletes who participate in out-of-season sports were affected because they were deprived of off-season training.

In May, the NMAA surveyed administrators and athletic directors about whether it should oversee summer activity in this instance; 76 percent of them agreed. By the end of the month, the association unveiled the first of three phases for schools to follow, which closely mirrored the guidelines set by the National Federation of State High School Associations.

Among the guidelines the NMAA provided were:

NMAA Executive Director Sally Marquez said the first phase focused on limiting athletes to conditioning. But even in small amounts, she said, participation has benefits for students’ mental health.

“It’s not really about skill development; it’s more the emotional and mental well-being of the kids,” Marquez said.

Many coaches said they have been inundated by questions from athletes and parents about if and when they could start preparing for next season. Some indicated they want to proceed with caution.

“They are real antsy,” St. Michael’s head football coach Joey Fernandez said. “I keep getting texts and emails as far as when we are going to get out there. I don’t want to rush it because [COVID-19] is still out there. I want to put them in a safe environment.”

Many districts are pointing to June 15. Larry Chavez, the assistant superintendent in charge of athletics for Santa Fe Public Schools, said teams can start activities on June 15; the Farmington Daily Times reported Thursday that Aztec, Bloomfield, Farmington and Piedra Vista high schools intend to do the same. Española Valley will follow suit.

Fernandez said St. Michael’s is still working toward a plan for its athletic programs, and Santa Fe Preparatory School athletic director Todd Kurth said he doesn’t expect athletes at the school to start workouts until the end of the month.

Santa Fe Public Schools Superintendent Veronica García said she wants the district to be “nimble” as it adapts to whatever scenario plays out, both when it comes to summer activity as well as for the eventual reopening of schools.

How teams handle the next two months could be crucial in formulating a plan to return students to classrooms.

“I think we can glean that information, and it can better inform our planning overall,” García said.

For most sports, following the guidelines and protocols won’t be too daunting. Mandy Montoya, the head girls basketball coach at Peñasco, said she views the summer as a chance for players to work on individual skills. Her coaching staff of three helps make adhering to the 5-to-1 ratio easier.

“We’re looking at getting only 14 kids in the gym for one session and then get the next session in, all the way to the middle school,” Montoya said. “That’s how you build a program, anyway.”

Not all sports are as easily manageable, and football poses the biggest challenge. Andrew Martinez, the head coach at Santa Fe High, said he won’t start workouts until June 22 and will limit attendance to 25 players before expanding sessions for other players.

“I just want to make sure that we’re not putting anybody at risk,” Martinez said. “With all that’s been talked about, the players’ safety and the parents’ safety, as well as the coaches, are my greatest concerns. I don’t feel a week is going to hurt us.”

The summer guidelines may just be a precursor to what students will likely see if and when they return to campus. Butler said the teenagers’ ability to adapt to new norms will be tested. Old habits — such as sharing food, equipment and water bottles — are strictly forbidden. The same goes for physical contact, at least for now.

Carpooling definitely won’t be encouraged, even if it is the chief means of transportation for some students. Butler said that might make her decisions about how to separate players into pods much easier.

“If I see three or four of them come out of a car, I’ll be like, ‘I guess you guys are a pod,’ “ Butler said with a chuckle.

Then there is the sticky issue of COVID-19 testing. The NMAA is requiring all coaches to get tested a week prior to starting workouts, while students will be monitored via the temperature and symptoms checklist. Estrada pointed out players and coaches are taking the same risk, but the alternative of having athletes also get tested could be too costly for students’ families.

Still, the risk factor will be similar to what teachers may face in the classroom.

“At the end of the day, somebody is going to have to go out there and test the waters,” Estrada said. “I don’t know if it would be much different in the classroom.”

I hate to say this, but the numbers are starting to spike back up again. If I was a betting man, right now I would have to say that the odds of their being a football season is 60/40 against.