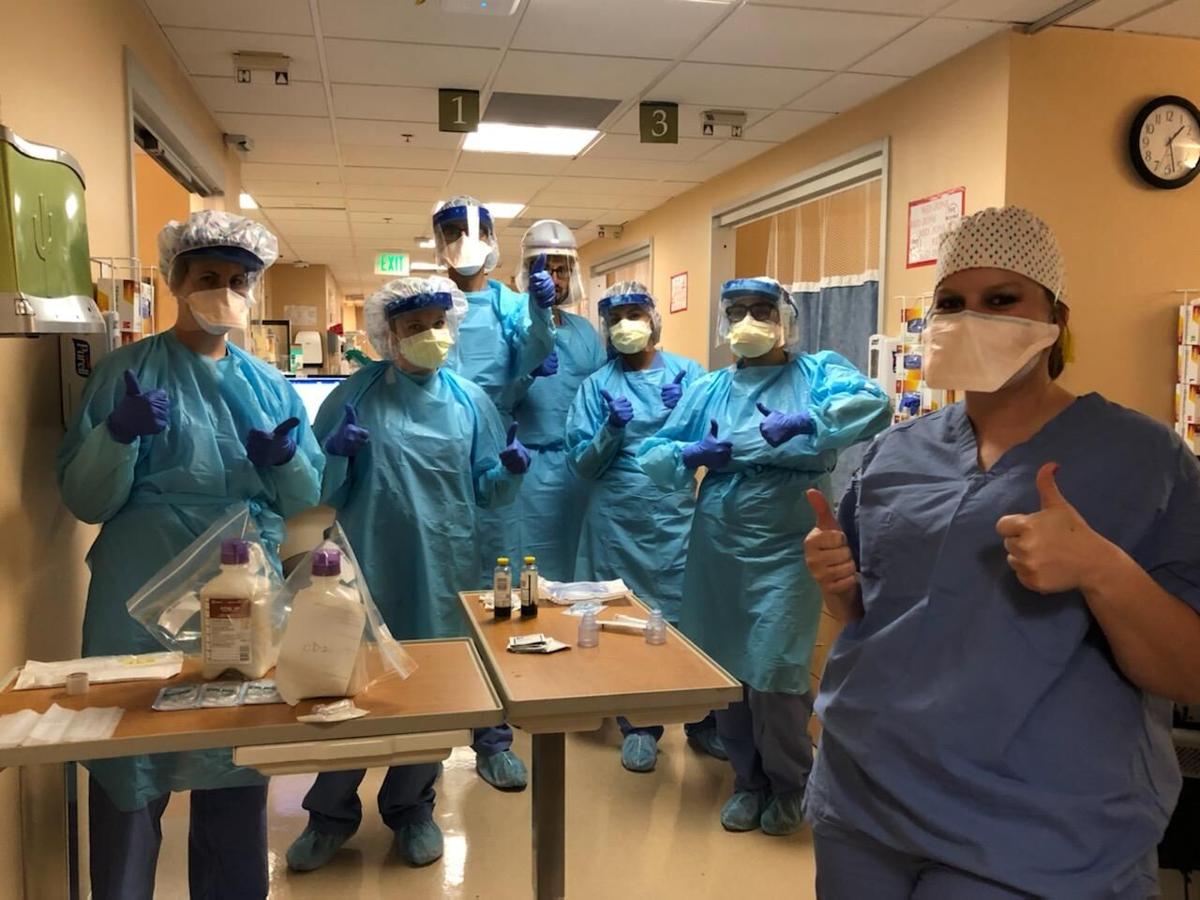 Staffers give a thumbs-up inside the ‘Frost 19’ isolation unit for coronavirus patients at Christus St. Vincent Regional Medical Center. 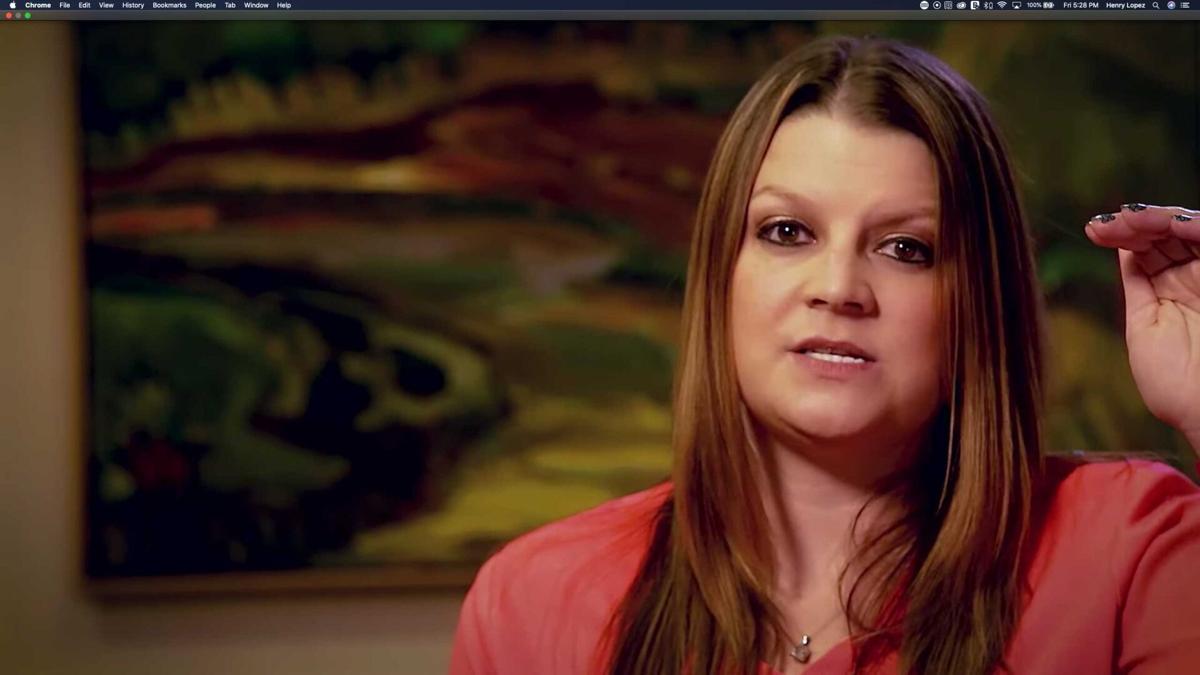 Bre Slaughter is among the nurses serving in the ‘Frost 19’ unit. 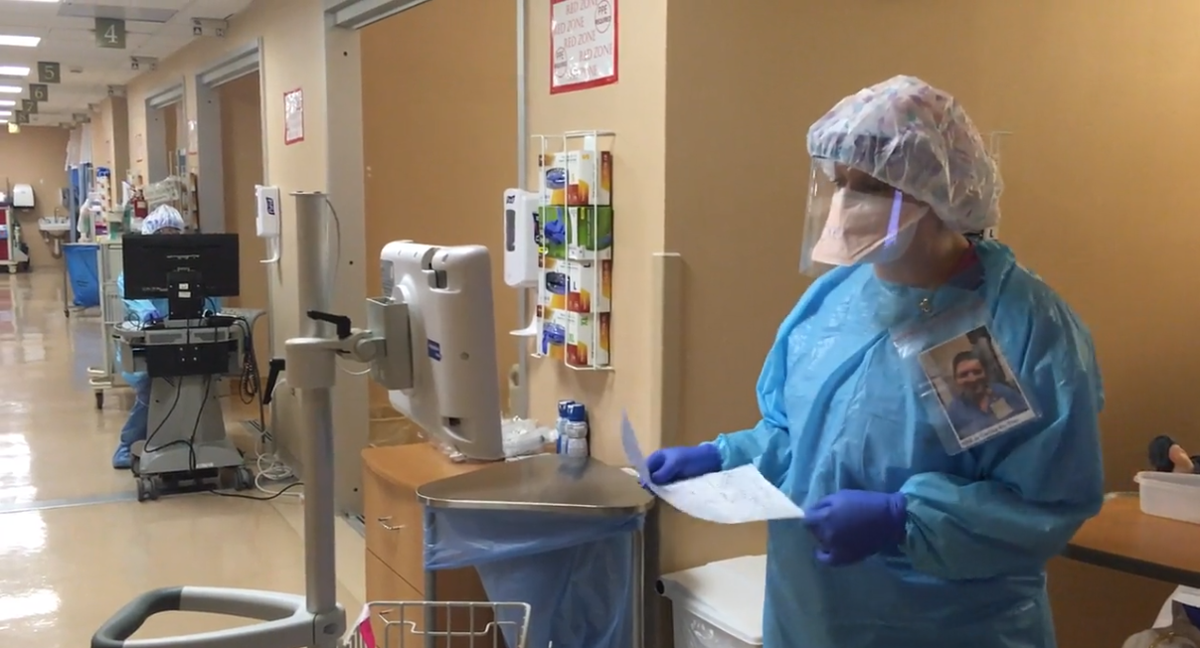 A Christus St. Vincent Regional Medical Center staffer works in the ‘Frost 19’ unit, which is isolated from the rest of the hospital for COVID-19 patients.

Staffers give a thumbs-up inside the ‘Frost 19’ isolation unit for coronavirus patients at Christus St. Vincent Regional Medical Center.

Bre Slaughter is among the nurses serving in the ‘Frost 19’ unit.

A Christus St. Vincent Regional Medical Center staffer works in the ‘Frost 19’ unit, which is isolated from the rest of the hospital for COVID-19 patients.

Her fear was about how afraid her family would be for her as she worked as part of the hospital’s special unit called “Frost-19,” which houses and treats these patients in a separate area from the general population. As of late July, the team had treated 74 patients, including 11 who died.

Most of the fatalities were people who lived outside Santa Fe County and were transferred to Christus St. Vincent.

The unit’s personnel — who volunteered for this work — care only for COVID-19 patients to minimize the risk of carrying the virus to other parts of the hospital.

“We are actually considered the superhero team,” Slaughter said in a new video on how the hospital is dealing with the pandemic.

She found herself having to reassure her family, especially her mother, about her work.

“I’m going to be safe, Mom. Don’t worry. I’ll call you every night after shift,” she said, describing their conversations. “It’ll be OK, Mom. We’ve got the right PPE.”

Having enough personal protective equipment made Slaughter feel safe. If it was in short supply or ran out, as was reported about New York City hospitals, she would’ve been scared, she said.

Christus St. Vincent is now treating more Santa Fe County residents infected with the novel coronavirus than earlier in the pandemic, when most of its patients were transferred from hot spots, such as the Navajo Nation. “Our numbers of positive cases are going up, and our hospitalizations have slightly ticked upward as well,” said Dr. David Gonzales, the hospital’s chief medical officer. “Almost all of it has been community spread. Some of it has been [from] travel outside of New Mexico.”

Most county residents have been good at wearing masks and self-isolating, which has prevented a large local surge, Gonzales said, but some insist on traveling, even though that increases the risk of being infected.

“Some of the cases that we’ve had here … are people who just went out of the state for a couple days and came back,” he said.

The increase in the local caseload has come after the hospital prepared for a strengthening wave of COVID-19, officials said in the half-hour video.

In March, at the beginning of the pandemic, the hospital came up with a “surge crisis plan” on how to handle testing, isolating patients, using personal protective equipment and managing staff.

The unit employs a method called “team nursing” that puts an intensive care nurse with an intermediate-level nurse and a technician, Slaughter said. That compels them to work together more than they would in a traditional setting, she said.

Gonzales said a bright spot about the hospital’s rise in local COVID-19 cases is that relatively few patients end up on ventilators. Most come in at an early enough stage in the illness to be treated with medications.

Doctors use a triple-treatment method, he said.

One treatment is the antiviral drug remdesivir.

A study published in the New England Journal of Medicine showed a group of COVID-19 patients who took remdesivir recovered in 11 days, compared to 15 days for those who didn’t receive the drug, and there was almost a one-third reduction in the mortality rate.

Another is to administer steroids that ease inflammation in the breathing passageways and help prevent organ failure.

And the third is to inject the person with plasma from a recovered COVID-19 patient with the aim of boosting antibodies, Gonzales said.

The earlier these treatments can be applied, the greater the patient’s chance of recovering from the illness, he said.

Since the hospital has adopted these treatments, fewer patients have needed respirators, he added.

“So we’ve become very aggressive in using all three of these together in our patients,” Gonzales said.

The hospital has treated infectious diseases for a long time, so it has leftover cleaning equipment it’s using in the current pandemic, such as a disinfectant fogger and ultraviolet light towers, said James Marx, the hospital’s executive director of quality and patient safety.

It also has installed an ultraviolet light cabinet that disinfects protective equipment and supplies, he said.

Dr. Theresa Ronan, the hospital’s medical director of quality, said the COVID-19 team monitors all patients who have tested positive, including those on ventilators and those who have received remdesivir and plasma.

“This information gives us greater insight into how the pandemic is affecting us here at the hospital — how it’s affecting us locally,” she said.

Slaughter called her work with the COVID-19 team a “rewarding experience.”

She cited the strong camaraderie within the unit.

Once, when a patient got the second negative test result he needed to be moved to long-term care, Slaughter said she blurted excitedly, “He’s negative!”

That prompted her co-workers to laugh and share in her elation.

“This is our job,” Slaughter said. “We know that [patients] trust us with their health.”

The unit, she added, could be a game changer: “I think it’s going to be really, really phenomenal … in the way nursing is shaped in the future.”

These folks are local hero’s. Thank you for what you do and for putting your lives on the line every time you go to work.