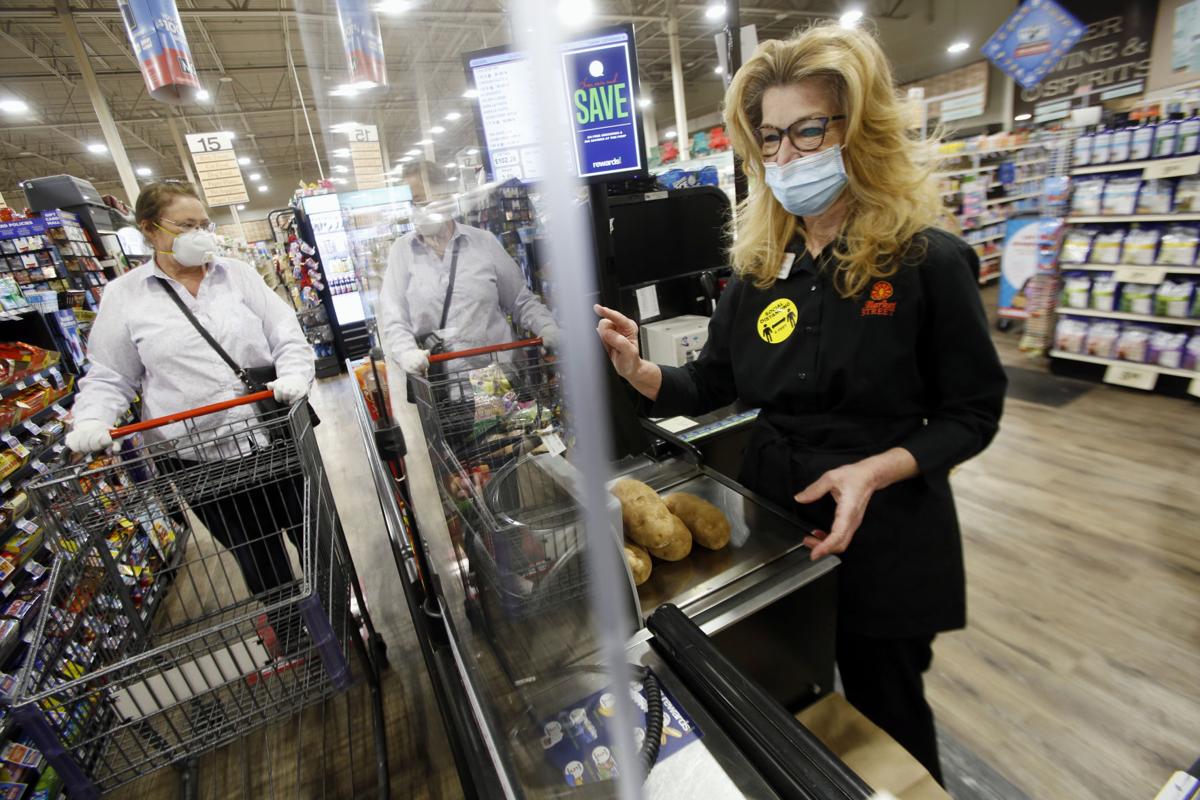 Kitty Wayburn of Santa Fe rings up groceries April 22 for Laurie Baker of Santa Fe at Market Street at the DeVargas Center mall. 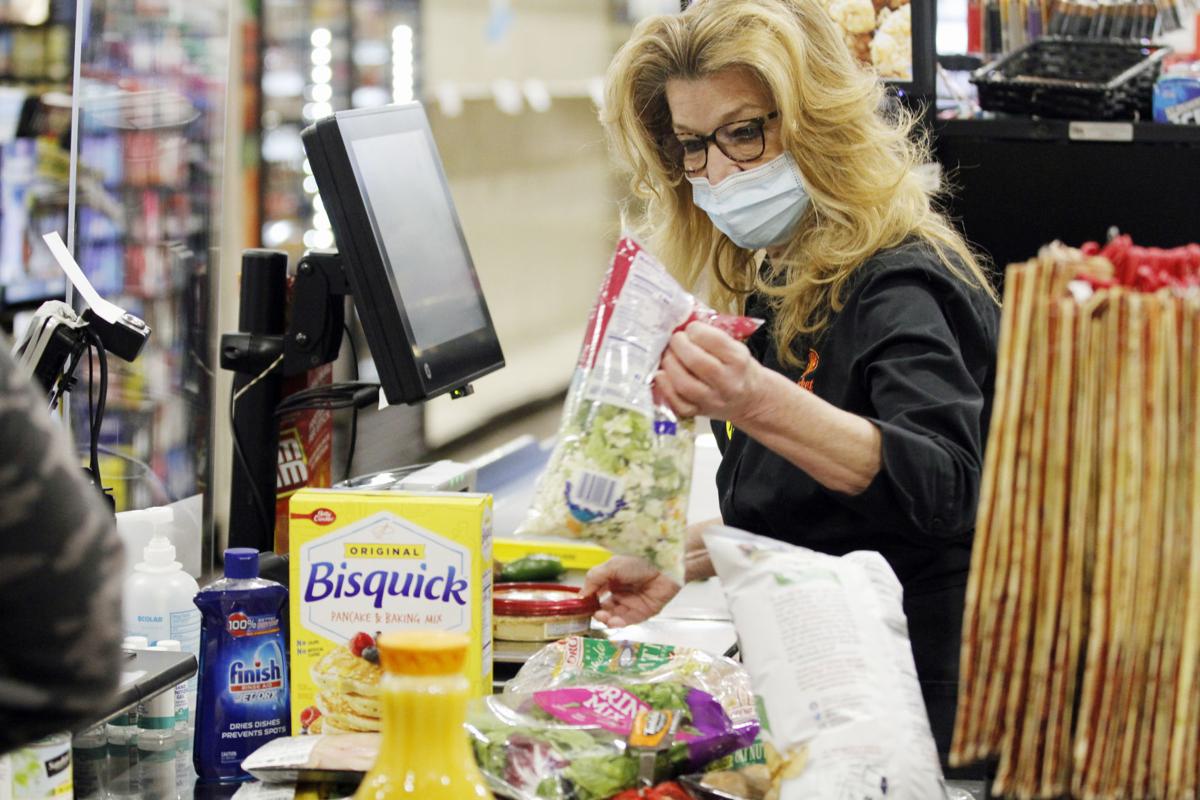 Kitty Wayburn of Santa Fe scans groceries at Market Street grocery store April 22. The pandemic has changed much of how Wayburn and her colleagues around the world do business, from Plexiglas barriers to wearing masks.

Kitty Wayburn of Santa Fe rings up groceries April 22 for Laurie Baker of Santa Fe at Market Street at the DeVargas Center mall.

Kitty Wayburn of Santa Fe scans groceries at Market Street grocery store April 22. The pandemic has changed much of how Wayburn and her colleagues around the world do business, from Plexiglas barriers to wearing masks.

Catherine “Kitty” Wayburn says she doesn’t see herself as a soldier on the front lines of the COVID-19 battle.

No, the veteran cashier says it would be better to define her and her fellow workers as something quite different.

“We are guardian angels,” the 63-year-old Detroit native said while checking out a steady line of Market Street grocery store customers.

“Maybe little guardian angels,” she added. “We watch over our community, we take care of our people. We’re out there, we’re essential and we wouldn’t have it any other way.”

Everyone from medical experts to those who just need a gallon of milk agree individuals like Wayburn — essential workers in an extraordinary time — have put themselves in harm’s way to ensure people are able to hunker down at home.

Even the most enlightened may not fully recognize the risks of a job that might’ve been taken for granted only a few weeks ago. In New York, Gov. Andrew Cuomo has called for those who continually come into contact with potential carriers of the respiratory virus — including grocery store workers — to receive hazard pay. The San Antonio Express-News recently published an editorial calling them unsung heroes.

Around the nation, some of those workers are falling ill from the virus, only to be replaced by equally gutsy souls, all well aware their next checkout may come with a high price.

But she said she’s not ready to leave her post, especially as she watches her colleagues show up for work every day.

A six-year veteran of Market Street, Wayburn doesn’t equate herself to a soldier. “But we are on the front line,” she said, gesturing to co-workers hustling about on a recent weekday morning — including a crew of six who constantly sanitize shopping carts and baskets, shelves, floors and cash register stations.

The pandemic has changed much of how Wayburn and her colleagues across the world do business. Plexiglas “sneeze repellent” barriers now separate them from their customers. Protective masks and gloves are a necessity.

So is hand-washing every 20 minutes in the nearby break room. Signs on the floor lay out 6-foot markers for customers to use as they practice social distancing.

With a state mandate limiting customer capacity to 20 percent of normal, the Santa Fe store has also initiated one-way aisles so customers can better avoid brushing up against one another.

She estimates 7 of every 10 customers wear masks and gloves.

The rest don’t see the virus as a real threat, she said.

“We wish we could give them one,” said Wayburn, who said the store provides fresh masks and gloves for all employees.

She appreciates that Albertsons Cos., parent firm of the United Family chain that oversees the store, temporarily paid all its employees $2 more per hour beyond their regular pay. That initiative began March 15 and was still in place Saturday.

One of Wayburn’s customers, Santa Fean Fred Garcia, who said he has shopped at the store for 25 years, said he has great respect for the work grocery employees do, especially now.

“They are putting themselves out there,” he said. “I have a lot more respect for them.”

Asked if he would like a job as a cashier, a masked Garcia replied, “I wouldn’t mind.” After a pause, he added, “But it’s still scary.”

This is not the type of work Wayburn expected when she decided, six years ago in Carlsbad, to take a part-time job as a cashier in the Albertsons store there. Before that, she worked 25 years as superintendent of the radiology department at Sisters of Mercy Hospital in Detroit.

She moved to New Mexico 15 years ago after her husband, Lawrence, was recruited to work in Carlsbad as a radiologist.

She said that as a child and young adult, she was fascinated watching cashiers work the registers, dealing with customers, ringing up sales and somehow remembering all those coded numbers that go with fruit, vegetable and other products.

Her job as a cashier in Carlsbad led to a supervisory position.

After moving here, she’s still a supervisor in Santa Fe.

Her boss, store manager Jeremy Miller, said Wayburn is always “leading the charge” when it comes to giving professional development classes and encouraging others to do their best work. He said she “always has a smile on her face.”

But she’s convinced there’s a higher purpose in the crisis. “This is God’s way of giving us a timeout,” she said. “We need to be spending more time with our families, with our loved ones at home.

“We need to learn how to be a person again.”

God bless Kitty and all of the grocery workers in Santa Fe. I see Kitty and many of her colleagues every Monday morning in Market Street, and I'm so thankful for what they are doing on the front lines with service and smiles. We thank you.

Yes indeed. We all have new respect and affection for the food store workers. Even before the virus they provided vital socialization for people who might otherwise not get it. Now, I could hug them. Oh, wait..

For no other reason, we should all wear masks out of respect for Kitty and her co-workers.