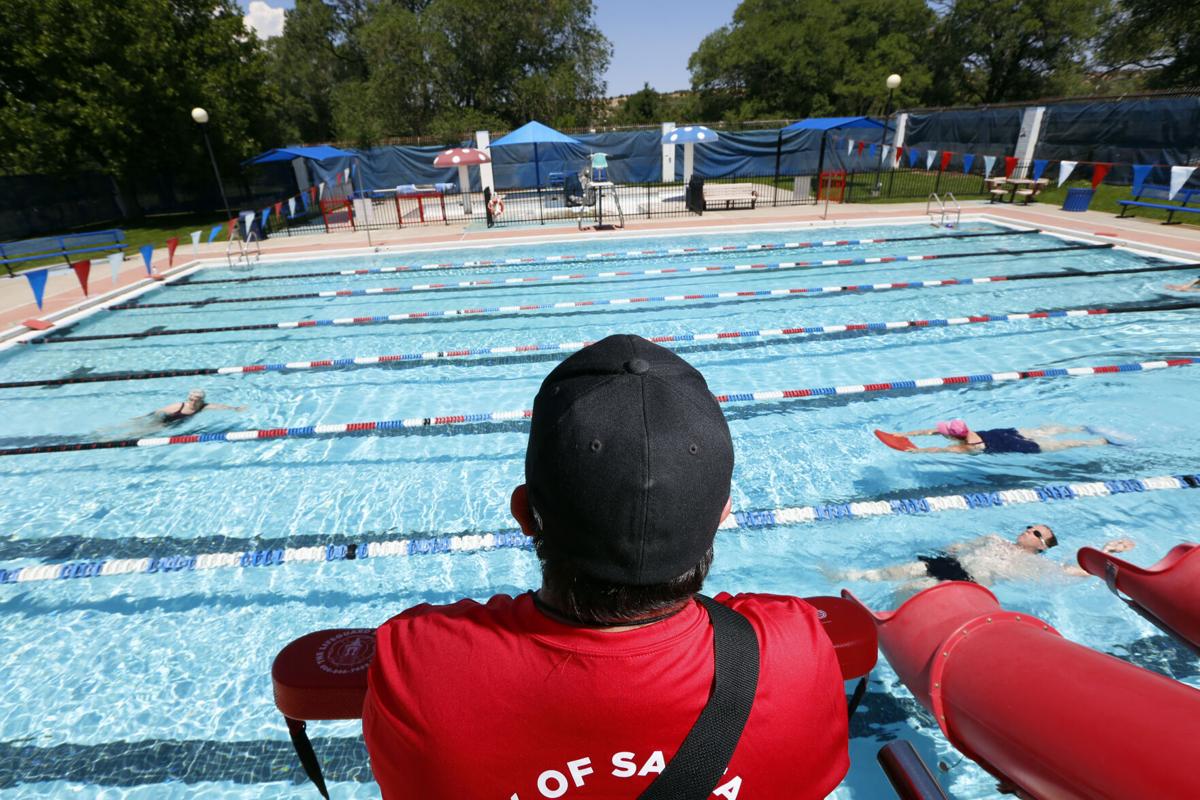 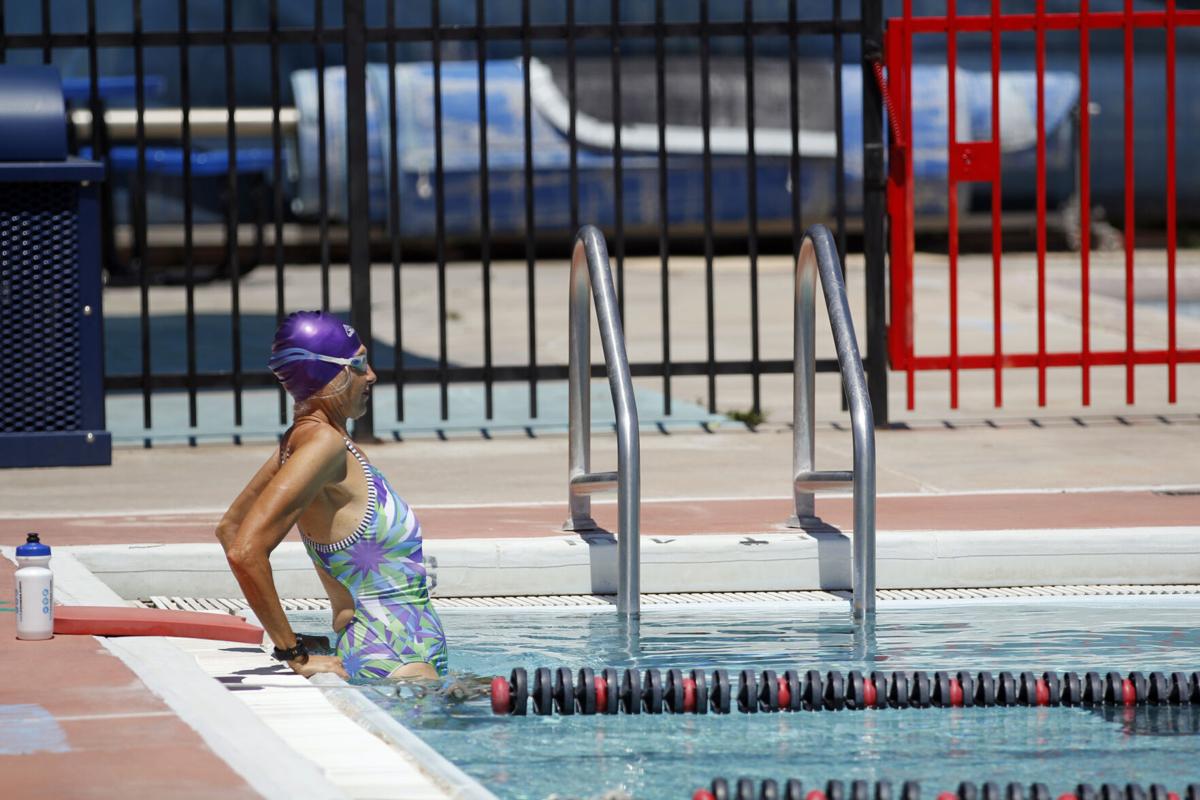 Sarah De Give of Santa Fe gets in the water to swim laps Monday at the Bicentennial Pool during opening day. 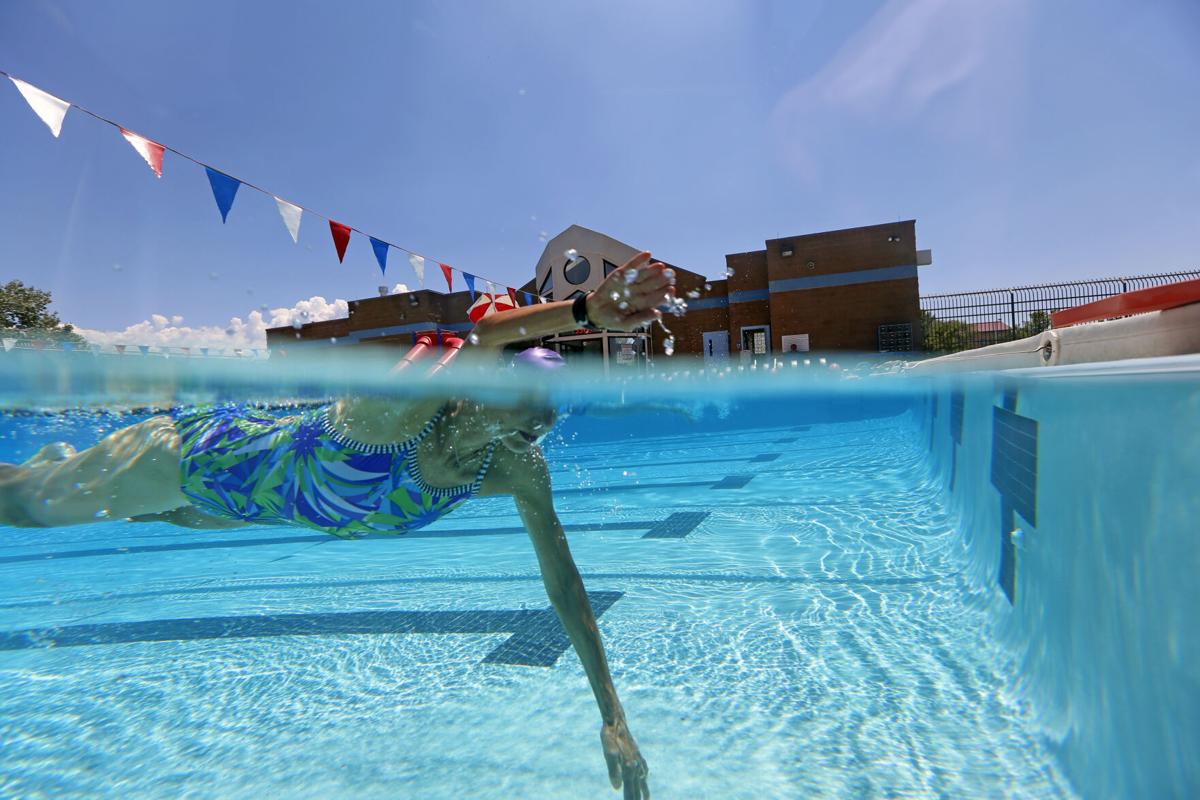 Sarah De Give of Santa Fe swims laps Monday at the Bicentennial Pool on opening day.

Sarah De Give of Santa Fe gets in the water to swim laps Monday at the Bicentennial Pool during opening day.

Sarah De Give of Santa Fe swims laps Monday at the Bicentennial Pool on opening day.

When Lawrence Fodor competed in U.S. Masters Swimming, the excitement and anticipation the night before a meet used to keep him wide awake.

Sunday night was no different, but it wasn’t a competition that prevented the 69-year-old from getting much sleep.

“I went to bed at like midnight. I set my alarm at 5. I slept, you know, maybe four hours,” he said, laughing. “You’re just too excited.”

The only city-owned outdoor pool in Santa Fe, Bicentennial Pool was flooded all day with a steady stream of excited swimmers, several of whom had petitioned Mayor Alan Webber and other city officials to open the facility.

“The water has never felt this good,” Cyndy Tanner of Tesuque said as she swam laps Monday afternoon.

The opening of Bicentennial Pool comes about a month after the city opened the Genoveva Chavez Community Center, which has an indoor pool. The city implemented strict protocols at both facilities, including temperature checks and screening questions, to help keep patrons and employees safe amid the COVID-19 pandemic.

Walk-ins are prohibited and children under the age of 10 are not allowed “for safety control purposes,” the city said.

“All but two slots were full today,” she said.

“People are happy,” Roybal added. “They’re delighted to be in that great water. Our staff is happy to be back doing what they were hired to do. It was just a seamless opening this morning at 6:30.”

The first person in line was Fodor, who pushed the Webber administration for weeks to open the pool. He also started a petition on MoveOn.org calling on the city to open the facility, which is usually open from Labor Day through Memorial Day.

“I sent multiple emails to our mayor, who never responded until I finally just said, ‘Look, how many emails does it take and how many times do I have to tag you on Twitter and tag you on Facebook before you respond?’ I was so frustrated with him,” Fodor said.

In a statement, Parks and Recreation Director John P. Muñoz said last week the city’s plan was to open the Chavez Center “safely and successfully” first and then open Bicentennial Pool.

Roybal said the pool could remain open into the fall. “We’re going to push to try to stay open as long as weather permits until October,” she said.

Muñoz has said the city is considering opening Fort Marcy Recreation Complex after Bicentennial Pool is closed for the season. He said the city, which is bracing for major revenue losses as a result of the pandemic, only has enough money in its budget to open one of the two facilities at a time.

The city has instituted a variety of safety protocols at its pools, including:

• Patrons are required to make a reservation at least 24 hours in advance and are asked to arrive showered and wearing proper swim attire.

• Swim sessions are limited to 45 minutes. Only seven spots are available during each session, or one person per lane.

• At the end of each session, the building is "cleared completely and sanitized for the next set of patrons," the city said.

• Patrons must wear masks or face coverings at all times, except while they're in the water. They're also required to sign a waiver and a code of conduct as a condition of entry.

There were a couple extra lanes at Bicentennial when I was there today, and there have been empty lanes at Chavez too. There should be some kind of waiting list/cancellation system, so the pools capture the revenue and more people get to swim.

Totally agree, Dan. I wonder why the city is not going to open Perez rather than Ft Marcy--it will be the newer facility and it has a higher ceiling. We spent over $2.5 million on the renovation (that is, taxpayer money)

The city touts its interest/support of socioeconomic as well as racial justice. Yet at the Alto St pool (Bicentennial) which is only one of two city facilities open and even if you have an annual membership, you are required to pay $7 for a 45 min swim. Why is the city charging? This pool was never an enterprise fund (self sustaining--you know like Chavez LOL) and until about three or four years ago, it did not require an extra fee. Why put up this barrier on the use of this facility for those who are lower income on the north half of town?

Congratulations to Lawrence Fodor for making something happen in this city. Lord knows it isn't easy.

A triumph! Our mayor is notoriously hard to reach, and his responses to constituents are often riddled with condescension. One small step for summertime, one giant leap for Santa Feans against Webber. Hooray!