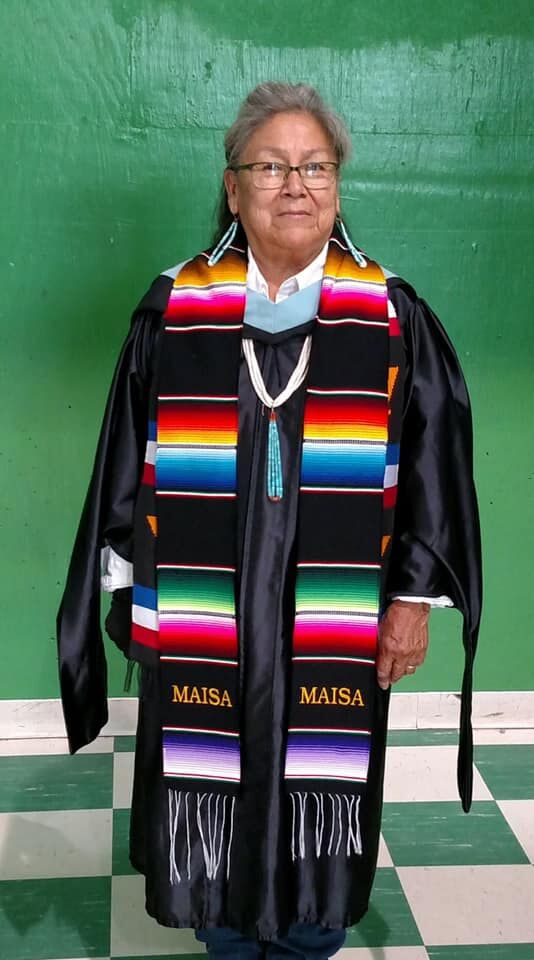 Laura Escalanti taught Spanish and the Tewa language at Pojoaque Valley middle and high schools for 20 years. She died Nov. 21 at age 69. 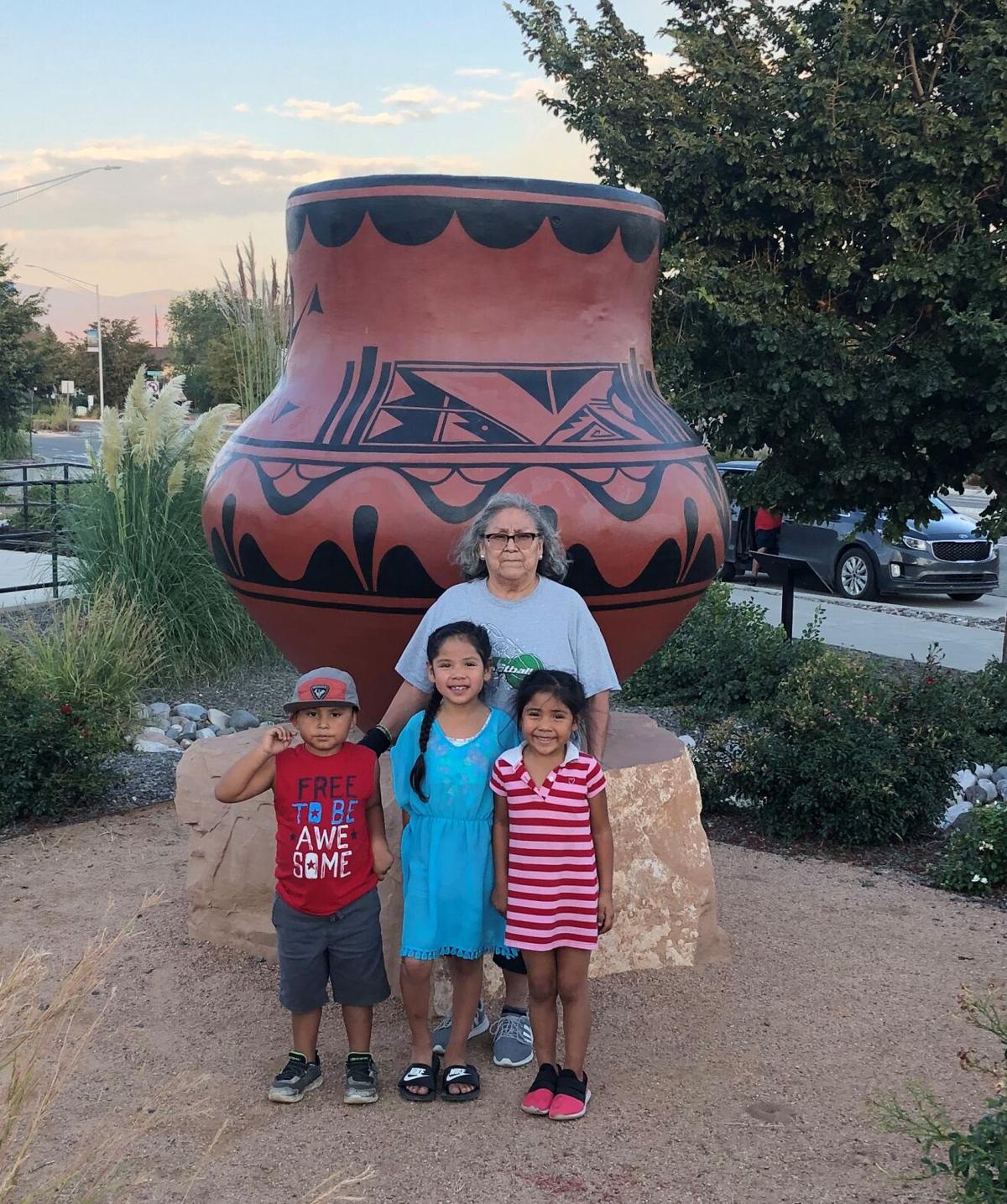 Laura Escalanti, with her grandchildren in Los Alamos, died Nov. 21 at age 69. She spent 20 years teaching Spanish and Tewa in Pojoaque schools.

Laura Escalanti taught Spanish and the Tewa language at Pojoaque Valley middle and high schools for 20 years. She died Nov. 21 at age 69.

Laura Escalanti, with her grandchildren in Los Alamos, died Nov. 21 at age 69. She spent 20 years teaching Spanish and Tewa in Pojoaque schools.

They called her Miss Laura.

It was a term of reverence and resonance, befitting the quiet power of what one person could teach a community.

Laura Escalanti’s wisdom was imparted in classrooms through the strength of the Tewa language, said former students and northern pueblo community members who added that her time as a Spanish and Tewa teacher in the Pojoaque Valley School District can never be replicated.

Perhaps that’s why this has been one of the saddest weeks in a very sad year for those who knew her.

Escalanti, who spent 20 years as a teacher, imprinting the importance of culture on students in their formative years, died suddenly Nov. 21 of COVID-19 complications at Los Alamos Medical Center, said her daughter, Tree Escalanti.

A beloved teacher who helped many Native American students connect with their culture through the Tewa language, Laura Escalanti’s contribution was critical in a school district that includes students from six pueblos.

“We lost a treasure,” said Joe Talachy, governor of Pojoaque Pueblo. “People like her are invaluable. It’s hard to find people with that kind of ambition, that kind of charisma and character that really gets through to our youth.”

Tree Escalanti said the community’s respect for her mother was never clearer than during a funeral procession from San Juan Pueblo to the church near her home in San Ildefenso Pueblo on Monday. Her body was accompanied by a police escort led by Talachy, with mourners standing on the shoulder of the roadway to honor a woman many in the community had known for years.

“It was just so amazing,” Tree said. “A lot of her students were lined up on the highway, there were staff [members from Pojoaque Valley middle and high schools], people from the community clapping for us. It was really amazing to see that.”

Tiffany Duran, who took Laura Escalanti’s Tewa class while she was in middle school in 2002, said she recalled the Friday feast days the teacher would hold, during which students wore their traditional clothing.

Laura Escalanti, Duran said, taught kids about their community’s culture through their language.

“Some kids, it seemed like they kinda wanted what we had because we had Miss Laura, who defended us and stuck up for us,” Duran said. “You’d catch the bus and nobody would put us down. … This is a hard loss.”

Duran said her son took Laura Escalanti’s class this year, and she credits the teacher with improving his self-esteem. Bullied for a time in elementary school because he had long hair, he’d made the decision to cut it short. But after being exposed to Laura Escalanti, he let it grow again, in part because of the pride he’d acquired through her teaching.

Still, there were limits, Duran said.

“Ms. Laura would tell him, ‘Pull those curtains aside. I want to see your face,’” Duran said. “She wanted to connect with you on a different level. She wanted you to understand our heritage and our language. If we don’t teach it to our children, we’ll never carry it on.”

Laura Escalanti came close to hitting that roadblock. She graduated from St. Catherine Indian School in 1968 and went on to the College of Santa Fe. But she dropped out when she was a senior to get married and moved to the Mescalero Apache Reservation. She lived there for the next 27 years before returning to Santa Fe in 1995 after a divorce.

“She really picked herself back up,” Tree Escalanti said. “To be able to tell that story about herself in front of kids, that’s what inspired them. That’s what made them want to show up for Miss Laura’s class. That’s why they stood on the side of the highway — they were losing their hero.”

Their hero was Tree Escalanti’s hero, too. She said watching her mother bed-ridden last week after being initially diagnosed with a sinus infection, crying in her arms, was devastating.

“It was very tragic,” Tree Escalanti said. “It has definitely shaken our school and our community. I still have parents emailing me about their kid because he won’t stop crying.”

Tree Escalanti said she is trying to remain strong because she sees how current students are taking Laura Escalanti’s death. She hopes she can be as much of a leader for them as her mother was.

“I try to keep that positivity when I think about my mother,” Tree Escalanti said. “And my heart remembers that it’s just a memory. I can’t get excited with her, but I am still going to be energetic and loud for her.”

She is a shining example of the living, Pueblo culture and the magical Tewa language. National Geographic has just last week declared the Pueblo Culture here one of thee top 8 destinations in the world. A bit ironic since the Pueblo Revolt of 240 years ago is what saved the Tewa speakers and others from extinction at the hands of the Spanish. We all have to resolve these things, and love with education is the best recipe...Thank You Miss Laura.

Three of my grandchildren had Ms. Laura as a teacher. When they speak of her they immediately get a smile on their faces. She really did love her "tribal Children." I'm not sure how someone else will fill her shoes. My youngest grandaughter had Ms. Laura as teacher all through middle school and was waiting to "zoom" with her on Friday 11/20 when the class was canceled. We will miss you Ms. Laura, please keep watching over your "tribal children."

My condolences to the community, family and friends of Miss Laura Escalanti.

May she Rest In Peace and May her memory be a blessing.