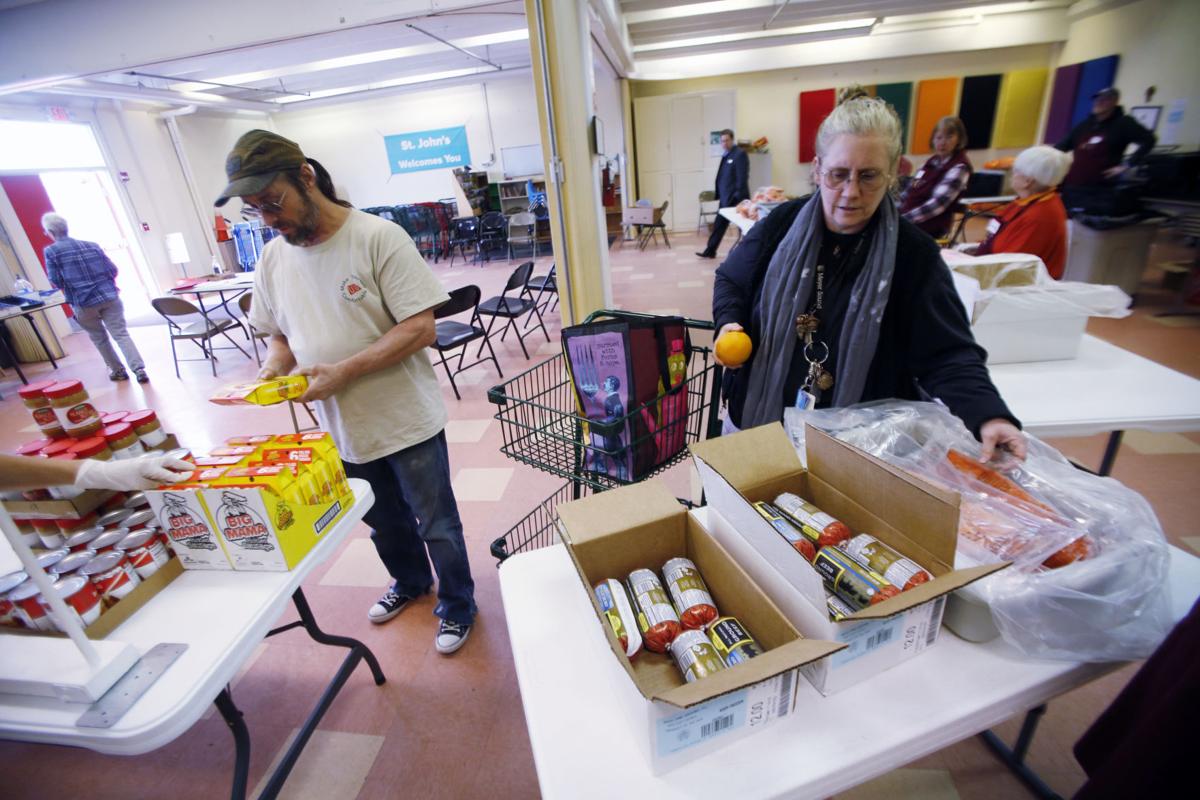 Don and Tonya LaFrance of Española pick up free groceries Thursday at the Bag ’n Hand Food Pantry at St. John’s United Methodist Church. ‘We don’t want to deprive people of food, especially in this time of need,’ said the Rev. Brad Bennett. 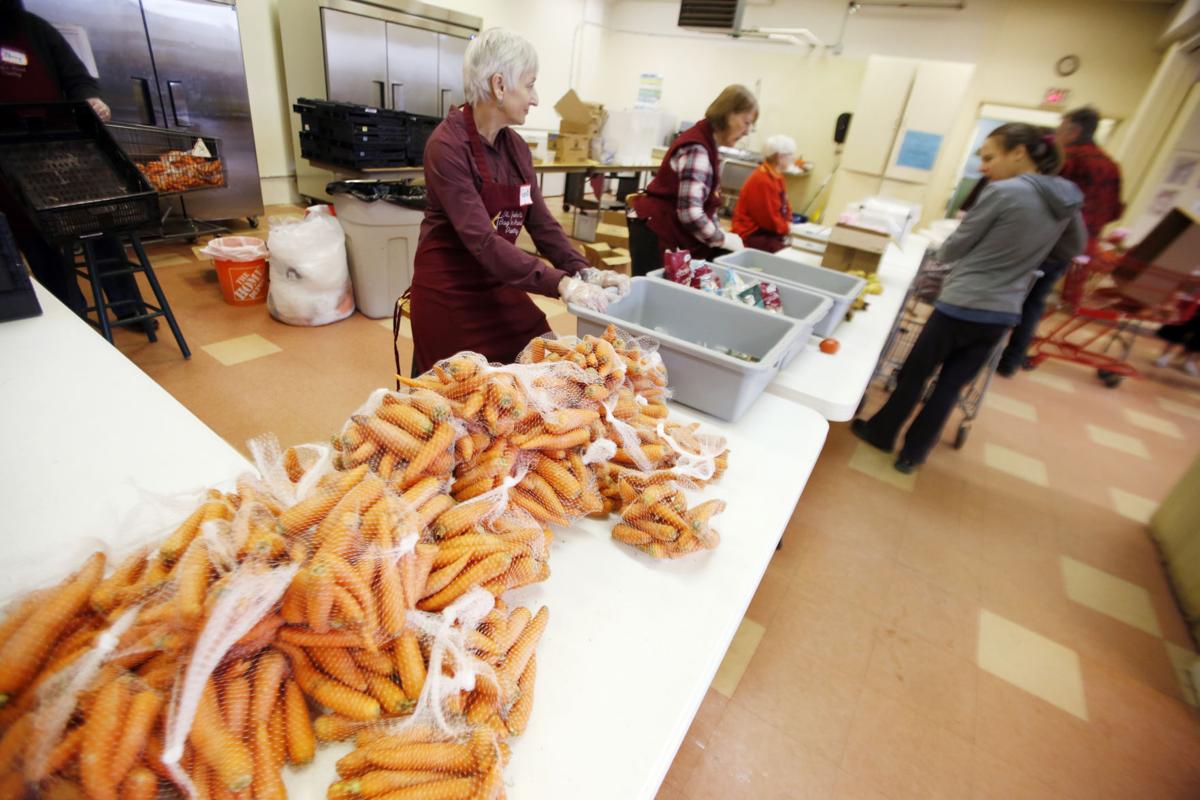 People walk through the line Thursday to pick up free groceries at the Bag ’n Hand Food Pantry at St. John’s United Methodist Church in Santa Fe. The church has canceled in-person worship services for three weeks but plans to keep its food pantry running. 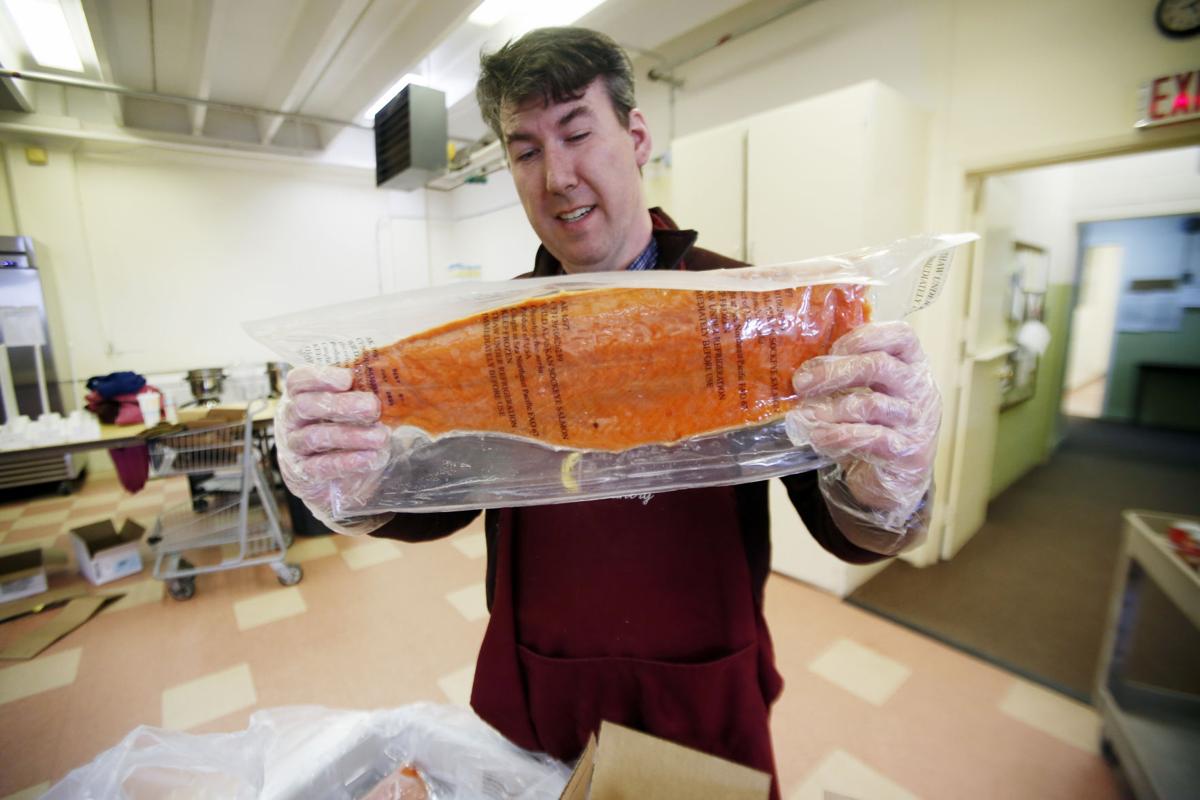 Brad Tway of Santa Fe reads the label on a cut of wild Alaskan salmon at the Bag ’n Hand Food Pantry at St. John’s United Methodist Church on Thursday. The church has canceled in-person worship services for three weeks but plans to keep its food pantry running.

Don and Tonya LaFrance of Española pick up free groceries Thursday at the Bag ’n Hand Food Pantry at St. John’s United Methodist Church. ‘We don’t want to deprive people of food, especially in this time of need,’ said the Rev. Brad Bennett.

People walk through the line Thursday to pick up free groceries at the Bag ’n Hand Food Pantry at St. John’s United Methodist Church in Santa Fe. The church has canceled in-person worship services for three weeks but plans to keep its food pantry running.

Brad Tway of Santa Fe reads the label on a cut of wild Alaskan salmon at the Bag ’n Hand Food Pantry at St. John’s United Methodist Church on Thursday. The church has canceled in-person worship services for three weeks but plans to keep its food pantry running.

The iPhone photo taken by a parishioner at a local Roman Catholic church said it all.

It depicted a bottle of hand sanitizer sitting in a font of holy water.

Balancing faith and fear perhaps has never been more difficult in Santa Fe — a place where Sundays are, if not sacred, at least comforting in their predictability.

But since the shadow of COVID-19 descended last week, church leaders from a variety of denominations have found themselves adjusting to a new reality: Many are tending to their congregations without actually seeing them.

Several major churches in Santa Fe will not hold services Sunday in the wake of Department of Health Secretary Kathy Kunkel’s order to limit gatherings to no more than 100 people in hopes of limiting the spread of the virus.

“The church has been built for communities for thousands of years, so not to be able to be together face-to-face is a sad thing,” said the Rev. Harry Eberts of First Presbyterian Church of Santa Fe, which is closed this weekend.

Even the largest denomination in New Mexico, the Roman Catholic Church, is going without services this weekend. Archbishop John C. Wester announced late Thursday the Archdiocese of Santa Fe was closing its churches in the city and canceling all services and school programs until further notice.

“We are a pro-life church, so this is pro-life,” he said Thursday. He also urged church members to pray at home.

With the usual expressions of faith limited or blocked, churches in New Mexico are scrambling for alternative ways to communicate with congregants, many of whom are frightened by the unprecedented outbreak.

“Churches [that close] will have to find ways to provide a sense of community and calm in a time of fear and anxiety, so we are looking for ways to reach out to people in a time of need,” Eberts said.

Innovation comes in a variety of forms: Rabbi Neil Amswych announced late last week that while Temple Beth Shalom would continue to hold live services, its members should only watch online from home via a livestream.

“During this totally unique station, we will form a virtual community of prayer instead of a physical one,” he said in a letter sent to the synagogue’s members.

Nevertheless, other places of worship remain open, at least for this weekend. Some faith leaders said they have a responsibility to be there for people who may be anxious or uncertain about the virus.

“Prayer lets us know that we are not alone, that we are connected to one another and to other people — and connected to God,” said the Rev. Talitha Arnold of the United Church of Santa Fe, which planned to hold its weekly Sunday services this weekend.

Right now, she said, she and other faith leaders have to answer the key question: “How do we respond with faith and not fear?”

At the same time, many said they realize they have to change practices to help protect those they serve in times of coronavirus. Gone at most churches, at least for a while, will be the practice of extending a hand to a fellow parishioner. Arnold’s congregation will instead practice a bow or nod.

Also gone will be the practice of asking worshippers to join hands in prayer.

The Rev. Brad Bennett of St. John’s United Methodist Church announced Friday that in-person church services would be canceled for three weeks due to health concerns.

Bennett said before Friday’s announcement, however, that churches must remain active in the community.

“I think people need us in a time of panic,” he said.

St. John’s will continue to operate its Bag ’n Hand Food Pantry. “We don’t want to deprive people of food, especially in this time of need,” Bennett said.

Meanwhile, other faith leaders said they planned to use phones and the internet to connect with their flocks, particularly those who are alone or vulnerable.

“We will make sure we call or have our deacons stop by if people need something,” said Lee Walters, interim co-pastor at Westminster Presbyterian Church in Santa Fe, which also canceled weekend services.

Arnold said she was working to find appropriate Biblical teachings to incorporate into her sermons. Arnold said her message Sunday would refer to a scripture verse about Jesus’ encounter with a Samaritan woman — a story, she said, about two people crossing the “unclean” lines of religion, gender and status.

“The one thing they have in common is their vulnerability — she’s a woman alone, he’s a man without a bucket to draw water in the desert,” Arnold said. “Despite their differences and their fears, they need one another. I think that’s an important message for this time.”

Arnold acknowledged people might be reluctant to come to any large gathering under the circumstances.

“I think we will have so few people that they can easily sit six feet apart,” she said.

While the slant on this particular article is plain, the reality of the situation is far-more serious. Be clear, The Holy Bible teaches that all things -ultimately- serve God: Rain. People. Wind. Pandemics. Truly, "..even the wicked were created for the day of destruction". Yet, not a single "Clergy-member" nor "News-reporting agency" has been honest enough to admit, the Coronavirus pandemic is an Act-of-God, unquestionably, of biblical proportions. Overstand, -if you will- for years I've taught the basic truism, while the fear and reverence of God is the beginning of Wisdom, Fear unto itself is not a Godly-spirit. Rather, the presence of Fear, is indicative of the absence of God. Thus, at this moment, from the White House to the dog house, a once-blessed and powerful nation is -literally- paralyzed with Fear. Meanwhile, greedy and impotent "Corporate Christianity" merely continues to echo U.S. "Government"-approved propaganda - from a pulpit. "Clergy" and "Churches", not unlike "Christian" U.S. "Government" employees, merely protecting their thirty-pieces of silver. Indeed, the blind, following blind "leaders". Truly, all things -ultimately- serve God, and Daniel 12:1 is Here.