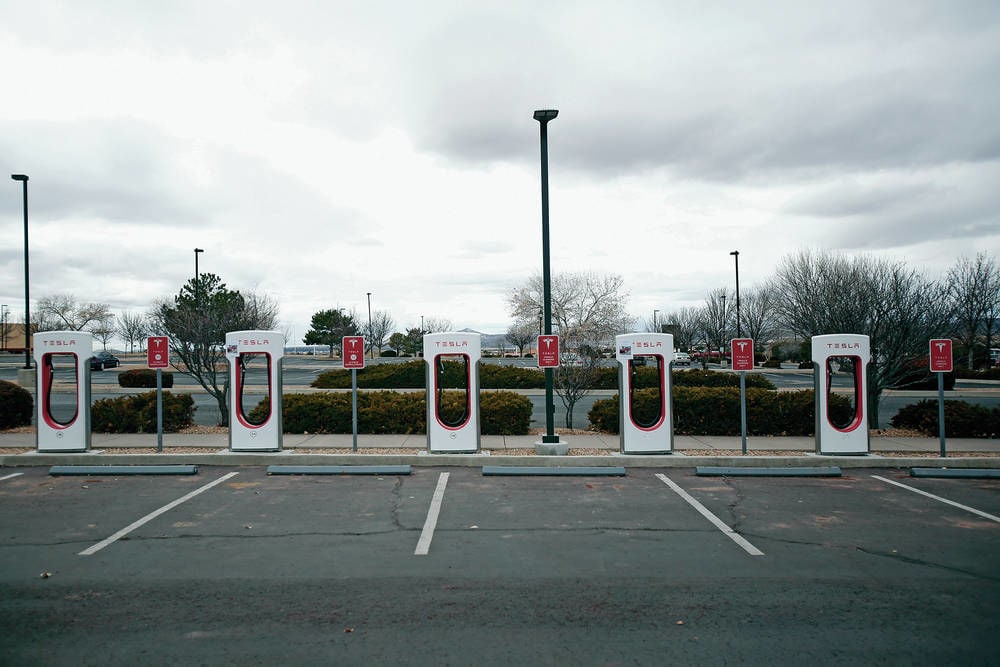 A Tesla charging station at Fashion Outlets of Santa Fe can accomodate several vehicles. But they only make up about 600 of the 2.46 million vehicles registered in the state. Luis Sánchez Saturno/The New Mexican 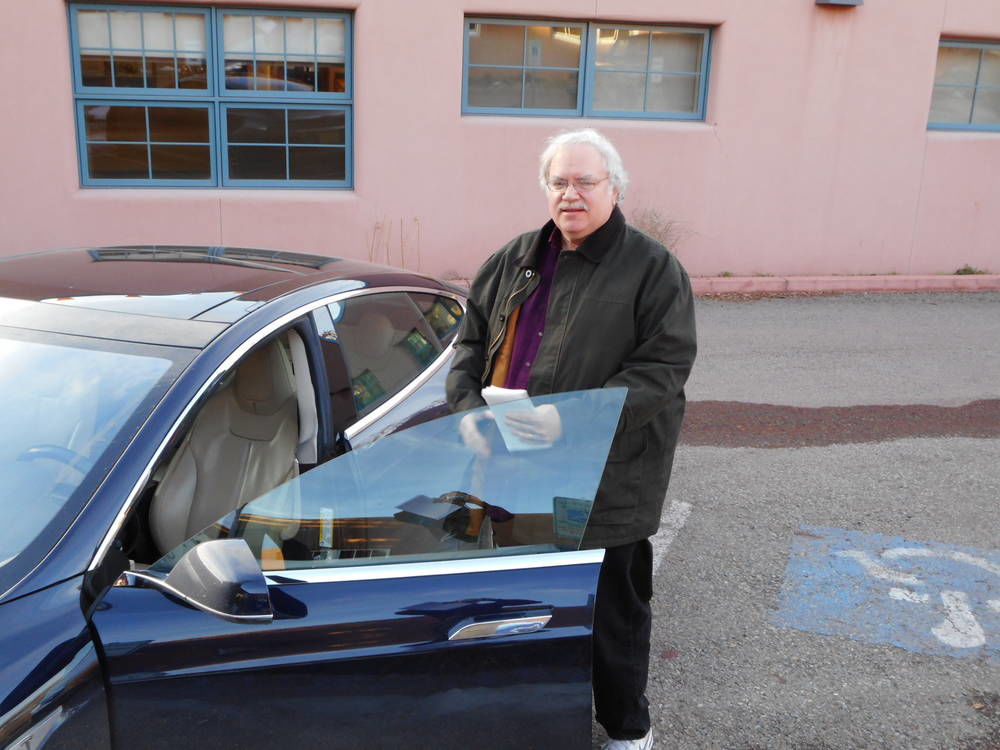 Brian Dear, founder and president of the Tesla Owners Club of New Mexico, is one of about 600 owners of the electric cars in the state. When he moved here from San Diego, he was shocked to find the carmaker has no presence in the state due to laws protecting car dealers. Teya Vitu/The New Mexican 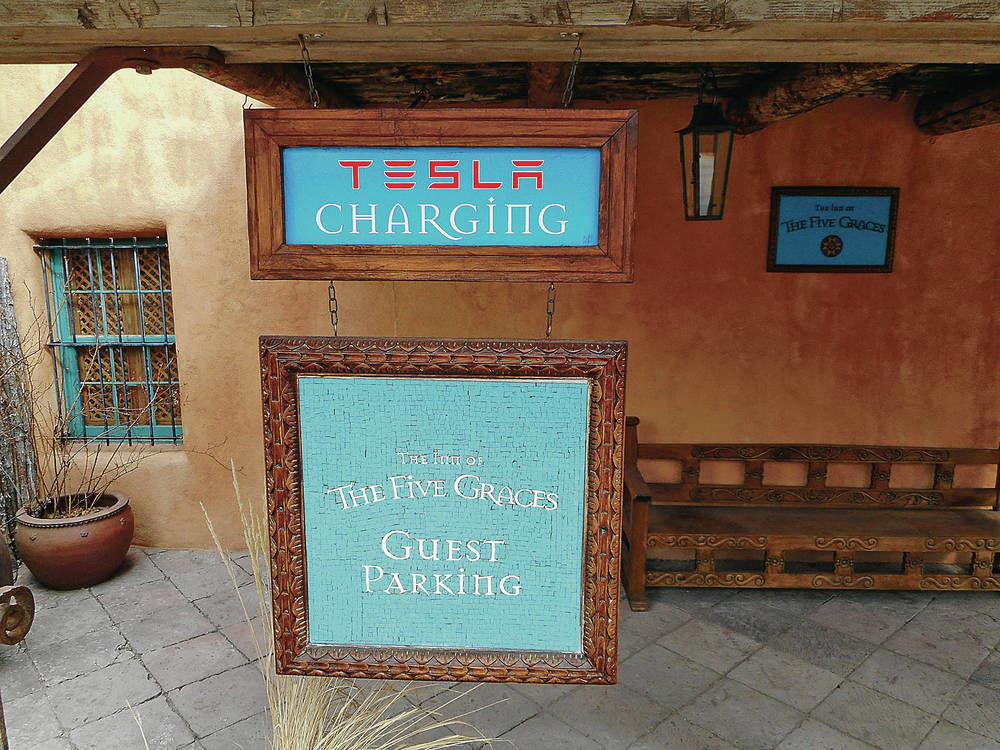 Tesla has a destination charging station at the Inn of the Five Graces in downtown Santa Fe. Teya Vitu/The New Mexican 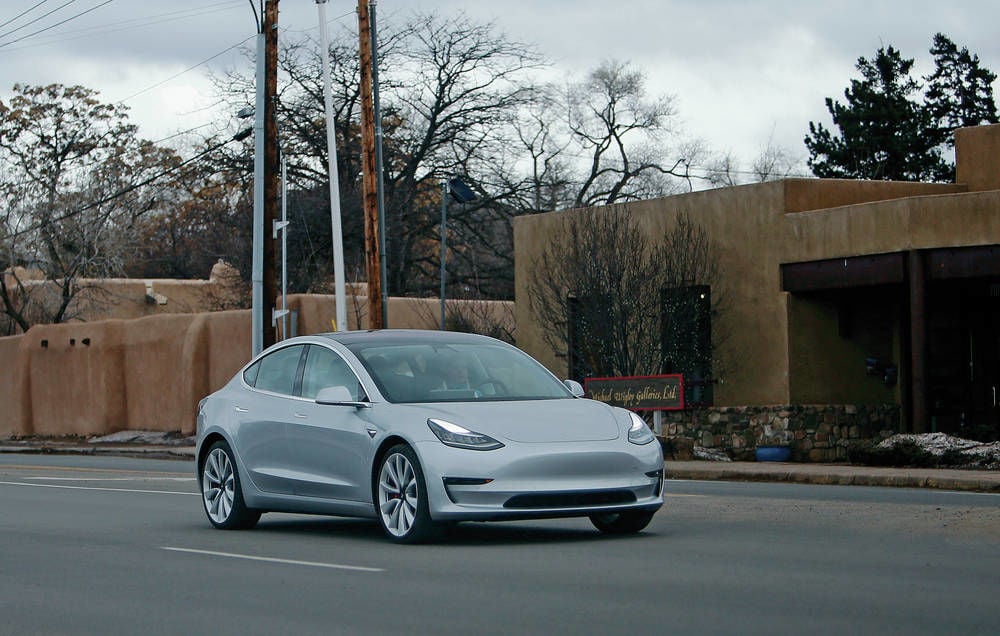 A Tesla charging station at Fashion Outlets of Santa Fe can accomodate several vehicles. But they only make up about 600 of the 2.46 million vehicles registered in the state. Luis Sánchez Saturno/The New Mexican

Brian Dear, founder and president of the Tesla Owners Club of New Mexico, is one of about 600 owners of the electric cars in the state. When he moved here from San Diego, he was shocked to find the carmaker has no presence in the state due to laws protecting car dealers. Teya Vitu/The New Mexican

Tesla has a destination charging station at the Inn of the Five Graces in downtown Santa Fe. Teya Vitu/The New Mexican

One by one, Tesla has convinced 23 states and Washington, D.C., to allow the maverick electric carmaker the ability to sell directly to the public as a licensed dealer.

So far, New Mexico is not one of them.

About 600 New Mexicans own Teslas. But there are no Tesla showrooms or service centers here, and owners either have to leave the state to buy or service their vehicles — or have the company deliver them to the door by truck.

State Sen. Gerald Ortiz y Pino, an Albuquerque Democrat, proposes amending a state law that prohibits vehicle manufacturers from selling directly to consumers rather than through an independent franchise dealership.

His Senate Bill 243 would allow “motor vehicle manufacturers to be licensed as motor vehicle dealers under certain conditions.”

It’s informally called “the Tesla bill,” though state law prohibits legislation for one business. The spirit of the bill is to give an exception to electric or alternative fuel car companies, but the bill as originally submitted simply mentions “motor vehicle manufacturers.”

“We adjusted the bill,” Ortiz y Pino said. “It provides an exception for all electric vehicles manufactured in the U.S.”

The bill passed the first hurdle Feb. 1 in the Senate Public Affairs Committee and now is headed to the Senate Corporations and Transportation Committee.

Tesla’s nationwide campaign to crack a national tradition dating back to the 1930s and ’40s has endless complexities as opposing camps seek to change or retain the new car dealership setup.

Reduced to the simplest elements: Supporters see many traditions are changing, and allowing Tesla to serve as its own dealer falls in line with that. Opponents like the independent car dealership system the way it is.

“All we’re asking them to do is do it under the same laws that every dealer does,” said Charles Henson, president of the New Mexico Automotive Dealers Association. “… Tesla says they can’t do that. It doesn’t fit their business model.”

Tesla Chairman and CEO Elon Musk in 2012 expounded on the Tesla approach to distributing and servicing cars.

“Tesla … would rarely have the opportunity to educate potential customers about Model S if we were positioned in typical auto dealer locations,” Musk wrote. “That is why we are deliberately positioning our store and gallery locations in high foot traffic, high visibility retail venues, like malls and shopping streets that people regularly visit in a relatively open-minded buying mood.”

SB 243 supporters look around the country to more than half the states — 27 in all — allowing Tesla showrooms and galleries (Tesla has four states with only galleries where there are no test drives, nor are cars sold).

“Do we want to be the last state to allow them to have a place to sell their cars? I don’t think so,” said state Sen. Bill Tallman, an Albuquerque Democrat and co-sponsor of SB 243. He’s also been a Tesla owner since June.

“When you look at all sort of states, if one guy does it should the other guy do it?” Griggs said. “Look at legal recreational marijuana. It’s right for Colorado. Is it right for New Mexico?”

Colorado, Arizona and Utah all have Tesla stores and service centers. Nine of the 23 states that allow Tesla dealerships limit the number of stores.

Brian Dear is one of the Tesla owners living in Santa Fe. He and his wife moved to New Mexico in 2015 from San Diego without realizing there were no Tesla stores or service centers here. Dear quickly founded and remains president of the Tesla Owners Club of New Mexico, which has about 250 members.

“I visited auto dealers [in San Diego], Audi, BMW,” Dear said. “I asked them: ‘Can you help me understand why New Mexico doesn’t allow Tesla?’ They all laughed. They said ‘That’s nuts.’ You’ve got Tesla all over the place in California. It seems to me a peaceful coexistence.”

Opponents to Tesla’s approach seem unconcerned by what other states are doing.

“That’s not the way the auto industry works in this state,” said state Sen. Stuart Ingle, a Portales Republican and minority floor leader. “I don’t think this is something I can support. We need to have all dealers on an even keel with other dealers.”

“This bill would open the door for any electric car manufacturer,” Henson said. “You would have at least seven other manufacturers [around the world] wanting to come in.”

Tesla ownership is still a tiny fraction of the 2.46 million vehicles registered in New Mexico, according to the state Motor Vehicle Division.

A concern, he said, is what happens if a car manufacturer who sells directly to the public someday goes belly up.

“The franchise system has protections for consumers, such as if a car brand goes down, like Saturn or Hummer [both General Motors brands], dealerships will still service them,” Henson said.

Daniel Crane, associate dean for faculty and research at the University of Michigan, said dealer arguments are “completely unfounded.”

“Consumer protection and public safety have nothing do with those restrictions,” Crane wrote in a report called “Tesla and the Car Dealers’ Lobby.” “They are protectionism for car dealers, pure and simple.”

Griggs, the state senator from Alamogordo, said car dealers in his city and Carlsbad, also in his district, would oppose SB 243.

“They believe customer service is more doable the way they’ve done it,” Griggs said. “Everybody is concerned with some sort of changes. What change would we see from Chrysler and GM if Tesla did it?”

For his part, Dear said he believes more than 1,000 Tesla cars will be in New Mexico by spring even with no dealerships or service centers.

Tallman, the state senator, bought his used Tesla in Dallas after also looking in Denver and Phoenix.

“[The opponents] don’t like it because it is direct sales,” he said. “Everything is direct sales. The business world has moved on. It’s the future. It’s a restriction of trade. America is all about competition.”

Tesla on Jan. 30 for the first time announced quarterly profits in consecutive quarters, though the fourth quarter profit was lower than the third quarter.

Media accounts throughout 2018 were rife with teasers like “Tesla: Elon Musk’s $999 million problem,” “Tesla Slashes Spending, and May Add to Its Troubles,” “Tesla sued by Nevada for failure to pay $650,000 in taxes” and “Elon Musk should be more transparent about Tesla troubles.”

Henson cites Tesla’s instability now as a reason he thinks New Mexico should be wary.

“The Tesla we are engaged with today is not the Tesla of 12 months ago, 24 months ago, certainly not 36 months ago,” Henson said.

Musk himself in a Jan. 18 message to all Tesla employees wrote: “Tesla has only been producing cars for about a decade and we’re up against massive, entrenched competitors. The net effect is that Tesla must work much harder than other manufacturers to survive while building affordable, sustainable products.”

“It has not brought Western civilization down anywhere,” Ortiz y Pino said. “Anything we can do to reduce fossil fuels is good. It’s clearly a direction our society is going.”