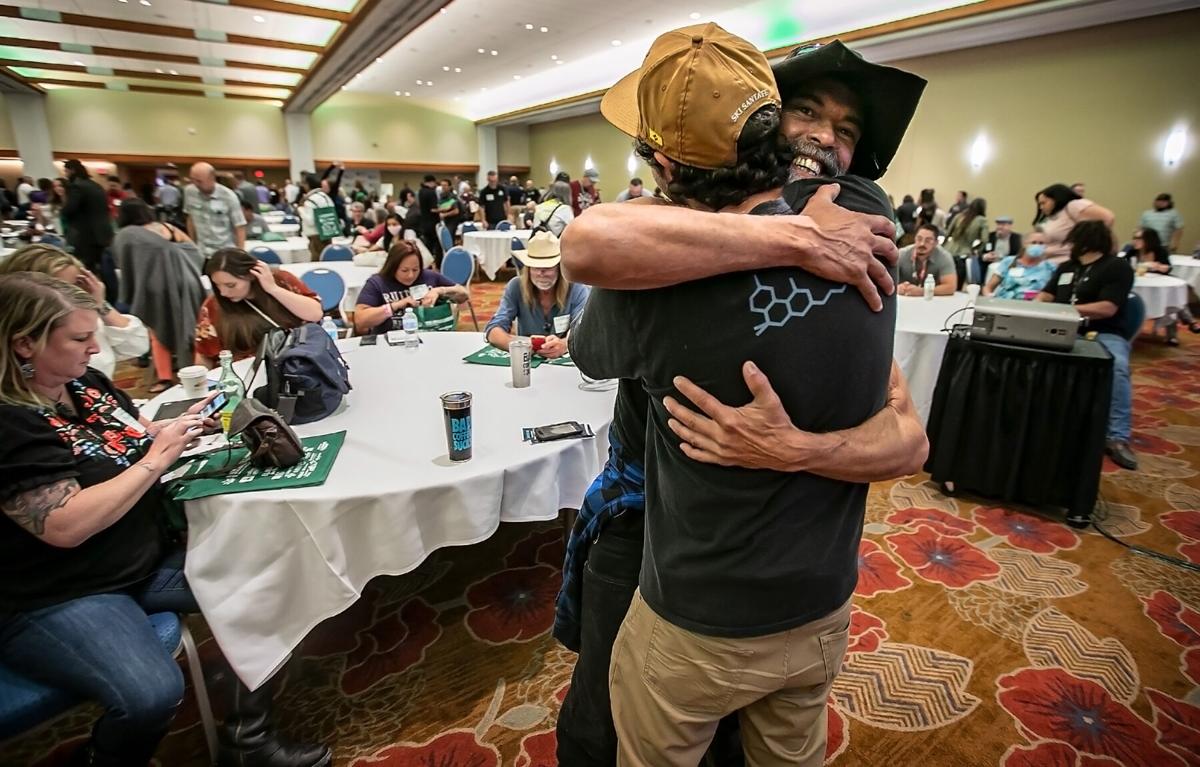 Madrid-based cannabis grower Travis Stroope, right, embraces Daniel Scharf, a former co-worker at a Santa Fe dispensary, as attendees network during the Cannabis Legalization Conference at the Albuquerque Convention Center on Wednesday. Over 300 would-be cannabis entrepreneurs gathered to learn about the intricacies of licensing, banking, branding and growing the new industry. 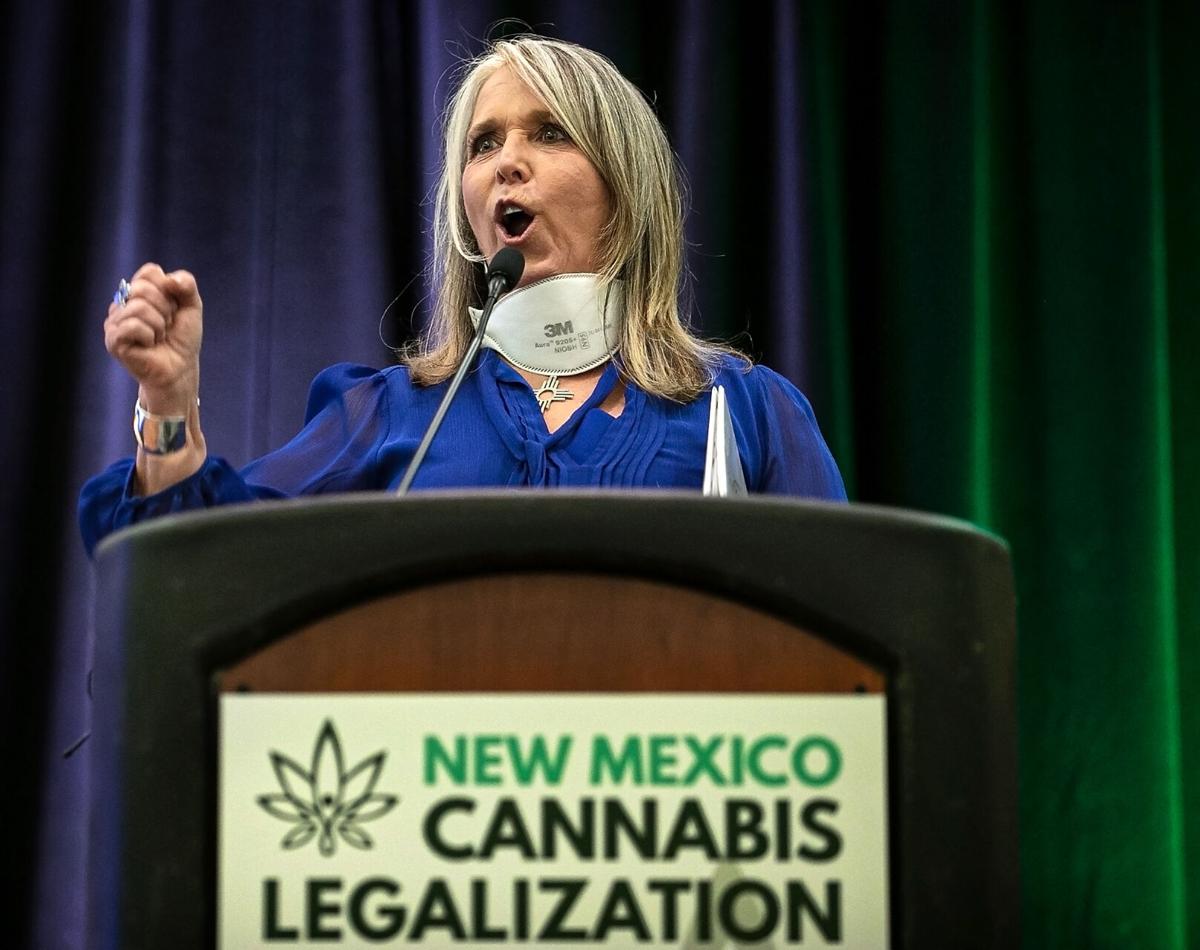 Gov. Michelle Lujan Grisham addresses a crowd of entrepreneurs Wednesday during the Cannabis Legalization Conference at the Albuquerque Convention Center. Over 300 would-be cannabis business owners gathered to learn about the intricacies of licensing, banking, branding and growing the new industry.

Madrid-based cannabis grower Travis Stroope, right, embraces Daniel Scharf, a former co-worker at a Santa Fe dispensary, as attendees network during the Cannabis Legalization Conference at the Albuquerque Convention Center on Wednesday. Over 300 would-be cannabis entrepreneurs gathered to learn about the intricacies of licensing, banking, branding and growing the new industry.

Gov. Michelle Lujan Grisham addresses a crowd of entrepreneurs Wednesday during the Cannabis Legalization Conference at the Albuquerque Convention Center. Over 300 would-be cannabis business owners gathered to learn about the intricacies of licensing, banking, branding and growing the new industry.

Gov. Michelle Lujan Grisham has a message for people preparing to invest in the state’s fledging recreational cannabis business.

“I want you to knock the socks off of this industry,” she told 300 attendees at the New Mexico Cannabis Legalization Conference on Wednesday.

Lujan Grisham said she wants people around the country to say, “Have you heard about New Mexico? It’s not green and red anymore” — as in chile — “it’s green and green.”

She predicted New Mexico’s cannabis eventually will top the product sold in Colorado. That state’s governor, Jared Polis, once challenged Lujan Grisham to a taste-off to find out once and for all which state grew the best green chile.

Lujan Grisham made her brief remarks at the Albuquerque Convention Center, where the two-day event is being held. The conference brought together established cannabis businesses and potential entrepreneurs for a series of presentations, workshops and study sessions all centered on the myths, realities and challenges of a brand-new industry.

State lawmakers approved legislation during a special session this year to legalize the possession and use of recreational cannabis for adults 21 and over, as well as to create a legal industry for cannabis production, manufacturing and sales. Possession and use of cannabis, as well as growing a limited number of plants for personal use, became legal Tuesday. But sales remain illegal.

The state Regulation and Licensing Department, tasked with developing rules for cannabis producers, manufacturers, retailers and others for a future commercial market, held a virtual public hearing Tuesday on the first draft of rules for growers.

Many prospective cannabis microbusiness operators told the agency the proposed rules — which would require license applicants to provide proof of water rights, security provisions and a facility — would make it difficult for newcomers to break into the industry.

Lujan Grisham — who said she favored legalizing cannabis back when former Gov. Gary Johnson, a Republican at the time, attempted to legalize it in the 1990s — spoke of her efforts to rally state lawmakers to get the job done this year.

Legislation introduced during the regular 60-day session stalled, leading the governor to call for a special session at the end of March.

“People were exasperated,” she said, adding she made it clear she expected a measure to make its way to her desk. She signed the successful bill into law in mid-April.

Now, she said, it’s up to entrepreneurs to make the industry a reality: “That challenge now is squarely in your laps.”

Some who attended Wednesday’s event said they intend to tackle that challenge head on.

Cid and Medina Isbell of Madrid said they are prepared to invest at least $800,000 into opening a fully integrated cannabis operation in the village south of Santa Fe. Starting in the spring, they intend to grow, manufacture and sell cannabis on their 30-acre property, which has a well.

They attended the conference to meet other growers and get ideas for their operation, they said.

During a public forum at the conference, some established medical cannabis operators spoke of the difficulties they faced in the beginning. When one of the panelists told an audience of about 60 people to prepare to spend $1 million breaking in, several people gasped.

Cid Isbell, who attended the session, wasn’t so surprised. But, he said, he has spoken with many prospective cannabis growers who seem to have little sense of what they are getting into.

“It’s hard for people to understand just how complicated it is,” he said. “It’s complex to make money at this. A lot of people think they’re gonna jump in and make money right away.”

Early state reports on the economic impact of the new industry said it is likely to create 11,000 jobs.

A Legislative Finance Committee report in March predicted recreational marijuana sales in the industry’s full fiscal year, starting in July 2022, will produce $19.1 million in tax revenue for the state and $9.4 million for local governments.

The following year could be more lucrative, with up to $30 million in tax revenue for the state, the report said.

But some economics experts warn New Mexico cannabis sales could drop dramatically after a brief boom, especially if the federal government or other neighboring states — such as Texas — legalize recreational use.

Matt Kennicott, a partner in P2M Cannabis Group, a consulting firm in Albuquerque, said he thinks the new industry will “take off like wildfire.”

“I think people have been waiting for this opportunity for a long time, not just entrepreneurs but people who enjoy the product,” he said. “We’ll probably blow the projections out of the water … on every level, including economics.”

The challenges, he said, are numerous.

“Anytime you get into a regulated industry, there’s a lot of compliance stuff that has to be done on the front end,” he said.

“You’re going to see people run into capital issues. They sort of have to have cash up front.”

Grisham must get high to say what she said?

Sure, it may be legal now, but the unmistakable reality is that employers are still going to be drug testing their employees... Why? Because the insurance companies require them to! Any way you look at it, smoking dope, can still cost you your job.

Indeed, the companies I am involved with are planning to step up testing here because of this problem. You can't have pot heads working on critical jobs, they will be fired.

I worked at Lockheed Martin in Littleton, CO for 37 years until I retired 3 years ago. I was never drug tested nor did I know anyone who was, except for new hires.

Perhaps people with Top Secret clearances were, but certainly not the vast majority of employees. And the worst thing that would happen for a first offense would have been drug abuse training, not termination.

You obviously didn't have launch codes, access to weapons of any kind, nor a job with the potential for mass casualties and destruction. Pushing paper from one side of a desk to another is not a critical job. I was randomly drug tested several times a year, from starting my petroleum career through when I was an officer of the company, since we did not discriminate about who gets tested no matter how dangerous the job, we were all treated equally. And BTW, you can't even be in the Olympics if you smoke dope....https://www.sportico.com/leagues/other-sports/2021/u-s-sprinter-shacarri-richardson-faces-olympic-ban-over-pot-test-1234633430/

I'll take a stoner over an abusive angry alcoholic any day of the week.

Cause you are a stoner

Meanwhile the only people "knocking the socks off the industry" are the blackmarket Mexican cartel dealers selling tons of illicit dope here, smuggled in from Mexico through the open southern border, that can be possessed and smoked legally, and they have no competition for almost a year. They will surely vote for her.......

Get Stoned for the People!

Get Stoned for the Economy!

On a serious note, a little about testing and THC longevity in the system.

If it’s safe (and now legal), why are public servants (aka state employees) not allowed to use? Hmmmmm ........ as the old sitcom Hogan’s Hero’s character Schultz would say,“very interesting”.

Just like you can't get drunk and go to work, no industry will allow employees to come to work stoned. The problem with pot is it stays in your system longer than alcohol so testing will be an issue.

Stays in your system long after you are not high, which means the consumer is rolling the dice as far as random drug testing. Well, its up to each person to use good judgement (and when the laughter subsides...)

Wasn't that Henry Gibbons from Laugh-in? Same helmet though :)

Actually, was not Henry Gibson. Was Arte Johnson.

Arte Johnson it is. We've reached critical mass consension on this one! That does go back a few years:)