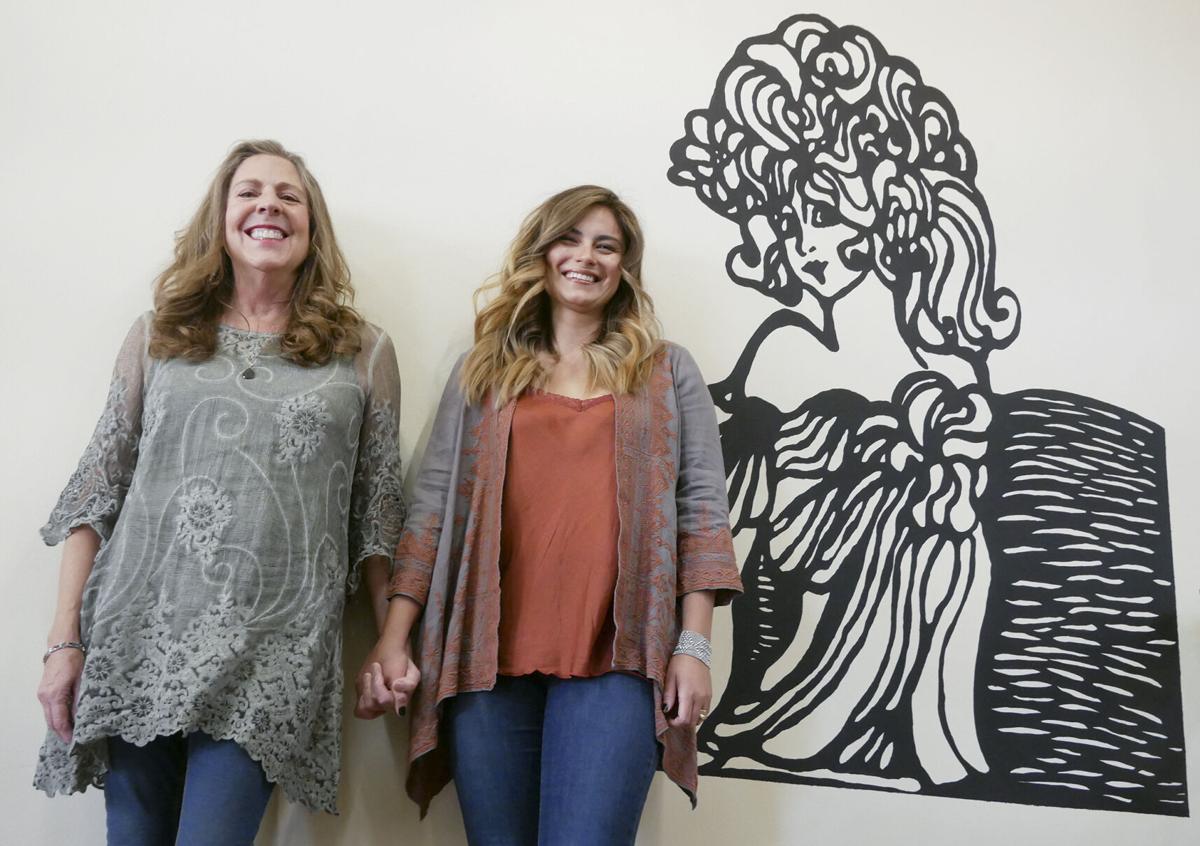 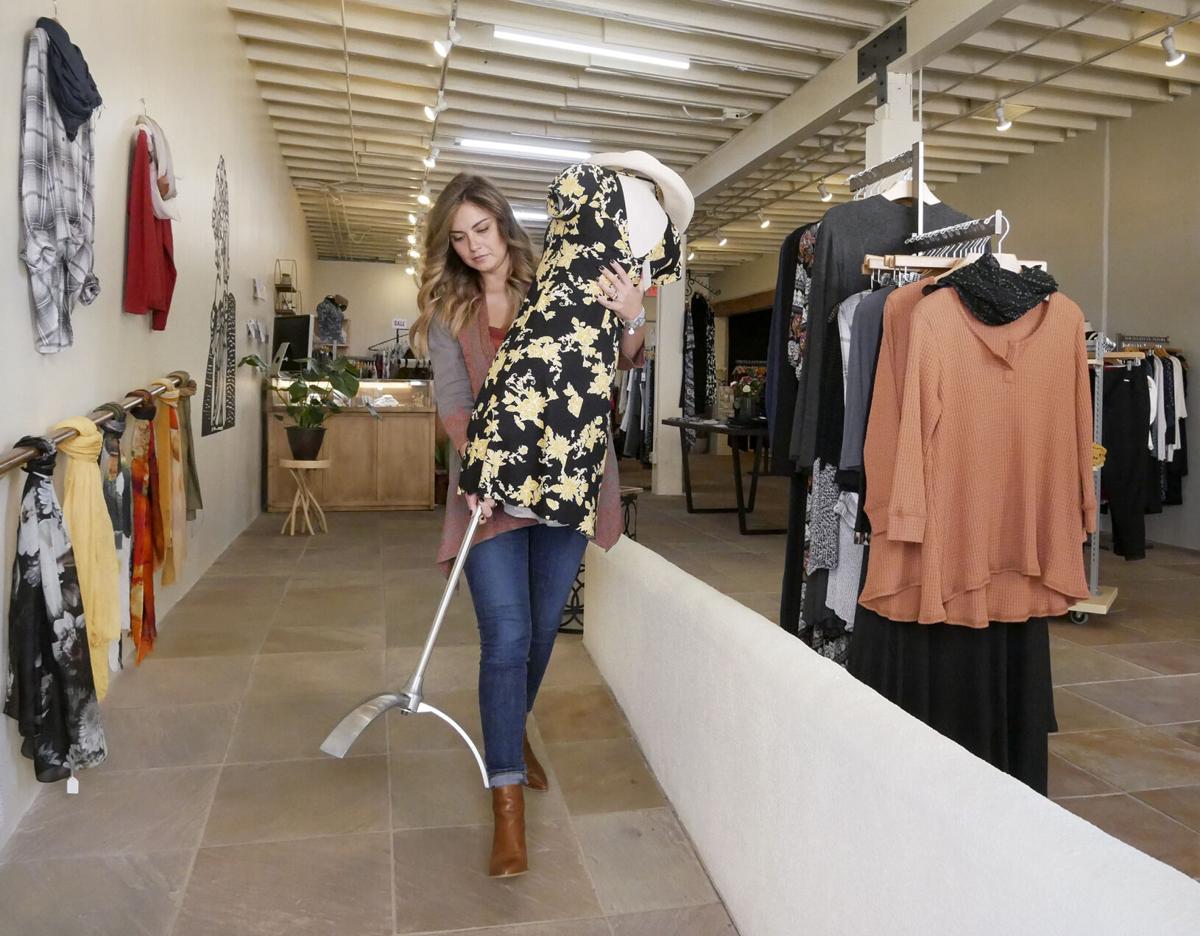 Antoinette Martinez, new owner of Sign of the Pampered Maiden, carries out a mannequin to display in front of her store Thursday before opening. 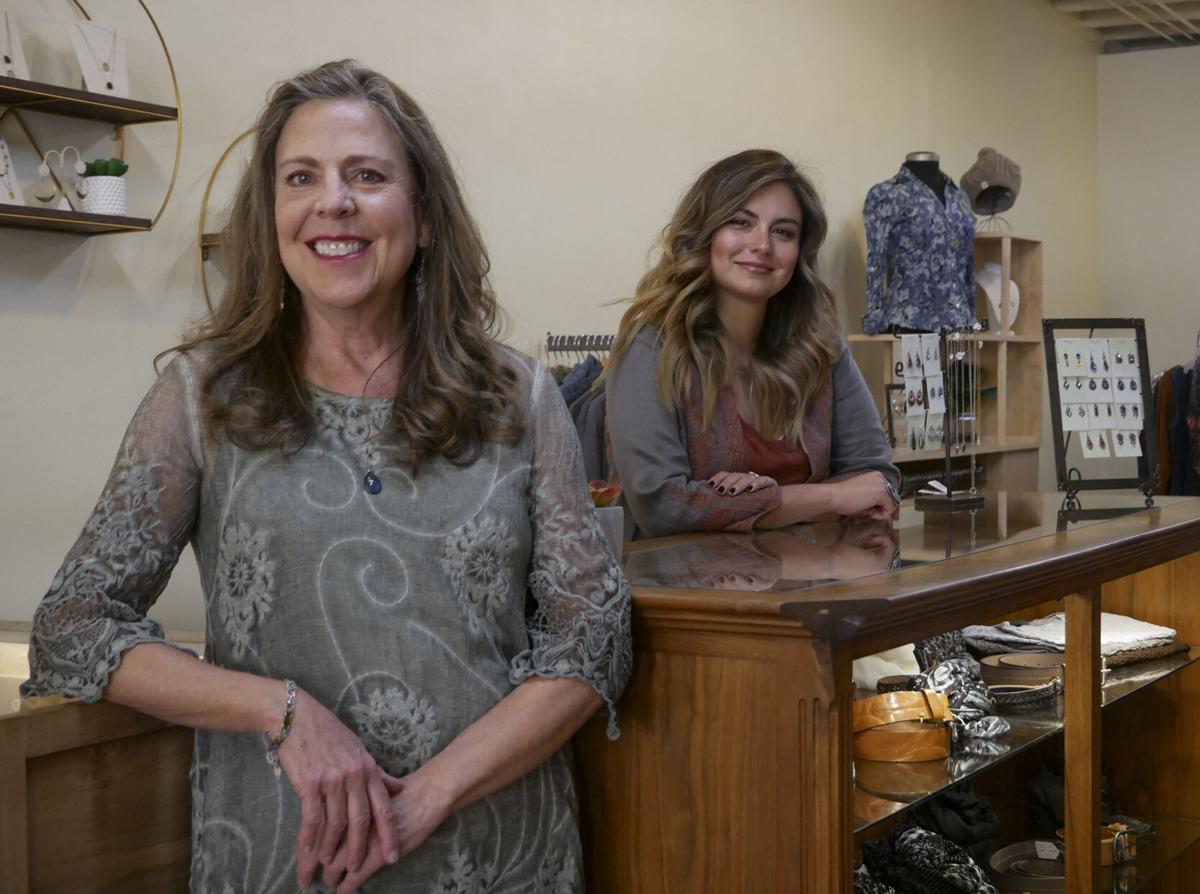 Antoinette Martinez, new owner of Sign of the Pampered Maiden, carries out a mannequin to display in front of her store Thursday before opening.

Since 1968, the sign with the sassy lady with big hair has dangled over Water Street and, since 1978, owner Eva Jackson has tended to clients of all ages, dressing them for nearly any occasion under the sun.

The Water Street sign will come down by the end of September. But it will live on around the corner, at a new location at 209 S. Galisteo St.

Jackson closed Aug. 27 on the sale of Sign of the Pampered Maiden to her employee, Antoinette Martinez, who has worked at the store since 2012 (except for a three-year break after a new child).

Martinez has fully embraced “the lady logo” on the sign and created a 7-foot-tall painted version for the showroom wall of the new store.

“One of the things I love is the logo on the wall,” Martinez said. “People do selfies and post them online.”

Martinez, 34, opens a new era for Sign of the Pampered Maiden, which Jackson, now 65, took over as a 23-year-old. The concept remains the same: Cater to all ages and dress women for any occasion, whether an equestrian event or the opera.

The new location, however, allows Martinez to put her stamp on the Pampered Maiden from day one.

“I was able to come in and make it my own,” Martinez said.

For the next week or so, Jackson is selling the last of the summer collection at the original Water Street store, which will then close, and Martinez has the fall collection in place on Galisteo.

“We both feel it’s a fresh, new start,” Jackson said of moving the store after 52 years.

Chris Hall has lived in Santa Fe for 30 years and has shopped at Pampered Maiden during that span. She believes Martinez is a “perfect” choice as new owner. Hall recalled why she kept coming back to Jackson over the years.

“She keeps up with all the trends and does so in a tasteful way,” Hall said of the store’s evolution over three decades. “The most important thing about the stores is there may be something I wouldn’t even look at and they say, ‘Try it on,’ and it looks good on me.”

Jackson moved to Santa Fe right out of college after working at a women’s clothing store at The Broadmoor resort in Colorado Springs, Colo. She got a job at the Pampered Maiden and six months later bought the store with the owner helping finance it.

“After 20 years, I sold it in the late ‘90s because I wanted to spend more time with my family,” Jackson said. “I became president of the PTA. I ran the PTA like a business. I was at every fundraiser possible. In 2002, I bought [the Pampered Maiden] back. When I approached them, they were ready and I was ready.”

“We have people reminiscing, ‘I bought my first prom dress here,’ ” Jackson recalled.

Kim Blueher is a loyal Pampered Maiden shopper who lives in Albuquerque, where there was a Pampered Maiden on Nob Hill in the 1970s. Blueher was introduced to the Santa Fe shop a decade or so later.

“Their inventory definitely fits my personality perfectly,” Blueher said. “It’s unusual but they also have classic pieces. They have an intuitive feel for what kind of experience people want to have with them. I have been lucky enough for them to show me things I would have never picked off the rack in a million years.”

“That was really exciting for me, getting involved in the buying,” said Martinez, who has degrees in social work and Spanish from New Mexico State University. “I always knew Pampered Maiden. I went shopping here with my grandmother.”

Just as shoppers Blueher and Hall homed in on the service provided at Pampered Maiden, Jackson and Martinez said customer service is at the forefront.

“People come in and know they will have our attention, and they trust our knowledge,” Martinez said. “We help them dress for any occasions.”

Local women’s clothing maker Bucko has supplied Pampered Maiden with stretchable pants, dresses and sweaters along with linen pants since 2016.

Owner Christa Jimenez said she looked for women’s clothing stores in Santa Fe that had been around “a very long time.”

“I loved their merchandise and I hit it off with Eva right away,” she said.

Pampered Maiden specializes in durable clothing — many items are reversible, “everything is washable,” Martinez said.

Jackson never got around to setting up a Pampered Maiden website. Martinez plans to launch one soon.

“People are waiting to shop online,” Martinez said. “The whole world has access to our website. I hope it increases our client base.”

Glad to hear this! (Now maybe they'll stock clothes in a wider range of sizes: Every time I've shopped there, I've been frustrated that they didn't have anything that fit over a size 10-12.)

Congratulations to both Eva and Antoinette! Two nicer people you couldn't find. We enjoyed working with you both - Sam Goldenberg & Associates.

So glad it will remain in the hands of a "local"!