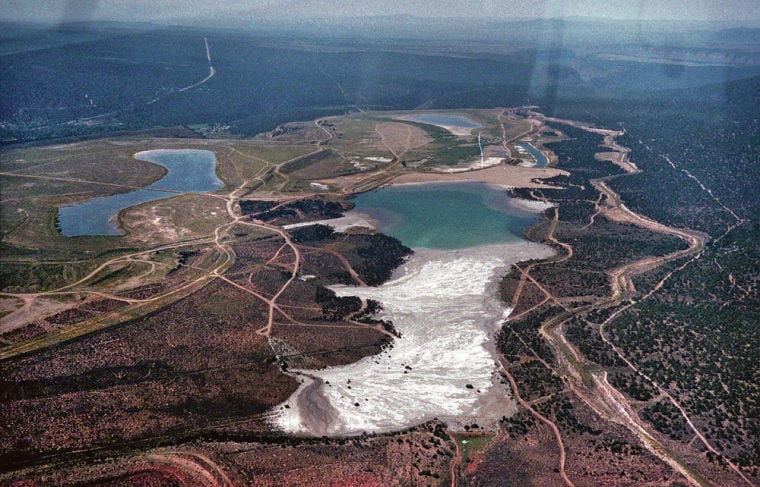 The Chevron molybdenum mine near Questa. New Mexican file photo 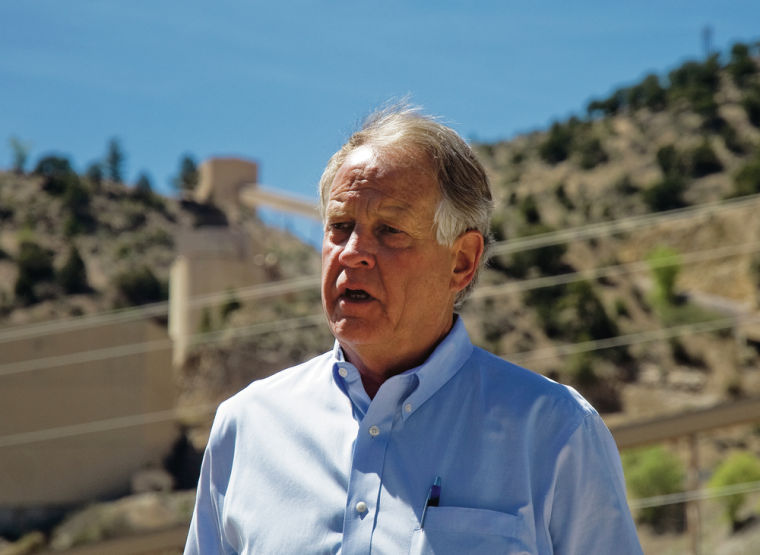 David Partridge, president and CEO of Chevron Mining, explains the reasons for closing the Questa molybdenum mine Monday. While the mine has had its ups and downs over its 100-year history, Partridge said this shutdown is permanent. J.R. Logan/The Taos News

The Chevron molybdenum mine near Questa. New Mexican file photo

David Partridge, president and CEO of Chevron Mining, explains the reasons for closing the Questa molybdenum mine Monday. While the mine has had its ups and downs over its 100-year history, Partridge said this shutdown is permanent. J.R. Logan/The Taos News

TAOS — David Trujillo was in the front row when his bosses broke the news to a roomful of miners last week that the Questa mine would be shutting down for good.

“I saw the dismay, the hurt in people’s faces. The worry,” Trujillo told The Taos News. “When it hit, it was just like a big rock.”

California-based Chevron Mining said it is permanently closing the molybdenum mine, citing low market prices for the metallic element used to harden steel and the mine’s increasing operating costs. About 300 employees were laid off.

The announcement has left many to wonder about the economic effects across Taos County.

Trujillo, 58, was an equipment operator at the mine for more than 25 years. He is best known under his radio code: “44-Dave.” Like his co-workers, Trujillo relied on the decent paycheck and good benefits the job offered. To be suddenly hit with the words “permanently closed” was hard to stomach.

“It’s going to be tough on this little town,” Trujillo said. “That mine bought my homes. It bought my vehicles. It raised my family. It helped my family raise their families. It has an impact on everybody.”

The community has felt the industry’s boom-and-bust life cycle before. The mine had layoffs in 1971, 1973, 1986, 1992. Most recently, Chevron Mining laid off 227 workers in 2009 after the price of molybdenum plummeted. The mine has since curtailed ore extraction and had been in a holding pattern waiting for the market to rebound.

But as more lucrative mines in South America and Asia come online, competition has been increasing, and officials say the Questa mine has become virtually obsolete.

Questa miners have heard the words “permanent closure” before. In 1992, then-owner Molycorp closed the mine when prices bottomed out. The underground mine flooded, and many believed the operation was dead. But a few years later, the price came back and the mine went back into production.

But David Partridge, president and CEO of Chevron Mining, was adamant last week that this bust would be Questa’s last.

While mining operations will cease, there’s still a lot of work to be done. In 2011, the mine and its nearby tailings facility were declared a Superfund site by the Environmental Protection Agency. A year earlier, the agency proposed a massive cleanup plan to reduce mine-related water contamination. The total cleanup is expected to cost as much as $800 million.

Chevron has said the EPA-mandated cleanup will continue. Even before the closure was announced, the mine planned to decommission the tailings facility west of Questa and the nine-mile pipeline that carried slurry to the tailings ponds. That work is expected to move forward as planned.

In addition, the mine says it will likely demolish or remove most mine buildings and other infrastructure. Partridge said work will probably take one to two years.

Chevron officials expect about 100 job openings in reclamation and closure to be available for former mine employees. The company already has posted about 20 positions that, at the moment, are only available to affected Questa employees.

Trujillo, who is president of the United Steelworkers local in Questa, says Chevron has so far handled the shutdown well. Officials have been straightforward and sympathetic, Trujillo says, and they’re going to great lengths to help workers get back on their feet.

“I’m sure it was just as devastating for [Chevron Mining] as it was for us, because we’re all a big family here,” Trujillo said, adding that he understands the financial reasons behind the corporation’s decision to close.

Still, a job at the mine meant a comfortable living (pay for the average worker ranged from $18 to $26 an hour, Trujillo said), and the shutdown has left a lot of former employees confused. “This place takes care of us, and I think that’s why a lot of people are so hurt,” Trujillo said. “In a sense, they sort of feel betrayed.”

Trujillo said he’s especially concerned for new employees who saw a future in the mine. “They were relying on this place, figuring they had 30 years down the road to pay for their home,” Trujillo said. “Those are the ones I really feel for.”

Under the terms announced Monday, about 170 hourly employees were sent home and will get 60 days of full pay and benefits, as required by federal law. The roughly 120 salaried employees will stay on at the mine until at least the beginning of August, said Chevron spokeswoman Margaret LeJuste.

LeJuste said severance for all employees is spelled out in existing agreements and will be paid at the start of August, though LeJuste said there are ongoing “discussions” between Chevron leadership and the union regarding employee payouts.

Tuesday morning, Trujillo and Chevron representatives were at a makeshift employee information center on the north side of Questa. About a dozen miners showed up at 10 a.m. for seminars on how to update a résumé, or to get information on training or relocation opportunities.

Laid-off workers bantered about what to do next. One young dad-to-be with a mortgage showed up early to get a jump on his job hunt. Another Questeño talked about taking his heavy machinery skills to the oil fields in West Texas. A couple joked that they were moving to Colorado to grow marijuana. One said in spite of the shutdown, he still planned to take the family to Disney World.

Beyond the obvious impact to the Questa economy, the shutdown of the mine will likely affect the culture of the region’s small communities. Trujillo said the mine employed people from places like Amalia, Costilla, Eagle Nest, Peñasco and Mora.

For many, the job at the mine was the only way to stay in these rural places. As has happened during shutdowns in the past, a lot of workers and their families may have to pick up and leave to find work elsewhere. And this time, there’s little hope of coming back to a job at the mine again.

In addition to being a large employer, Chevron over the years has made a number of charitable contributions to Questa’s schools, libraries and public service departments. It is also a key customer for businesses such as Kit Carson Electrical Cooperative. The co-op’s CEO, Luís Reyes, said Chevron generally accounts for as much as 10 percent of the utility’s revenue.

Spencer Hamons with Taos Health Systems, which includes Holy Cross Hospital, said hospital officials are concerned about the long-term effects the mine’s closure could have on the hospital now that many families either will be without health insurance or making do with a lower quality of health insurance.

Taos Town Manager and former deputy Taos County manager Rick Bellis said the village of Questa was already struggling financially and says the town and county will inevitably have to pick up some more slack.

Lejuste said Chevron will put $320,000 a year for the next eight years into a fund for the village of Questa. It will give an additional $1 million in 2015 and help the village with an economic development plan. She also said scholarships already given out to local students will be honored.

Job fairs are planned in Questa in coming weeks to give workers a chance to talk with contractors and explore options for additional job training and employment.

For Trujillo, support from the company and from the community will be key to moving forward in the shock of the shutdown. “We’re very strong people, and I know we’ll help each other out,” he said.

Questa Mayor Mark Gallegos told The Taos News the mine’s closure was obviously going to be hard on families and businesses in the community, but he said the cloud of a possible shutdown always hangs over the village.

“It’s a tough pill to swallow,” Gallegos said, “but at the same time, with the ups and downs Questa has had to go through before, it’s just made our skin a little thicker.”

The Taos News is a sister paper of The Santa Fe New Mexican.

They could employee those three hundred workers for the next fifty years if they were required to restore the land after cleaning up all the "Superfund"site. Re-contouring the land, planting trees and seeding with grasses should be done, and it requires lots of manpower.