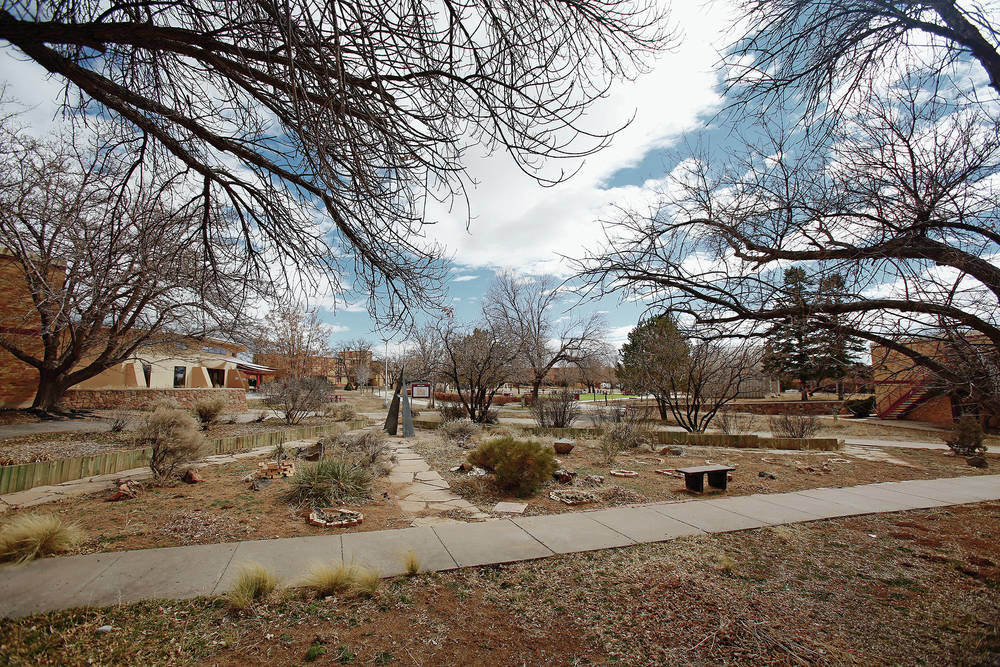 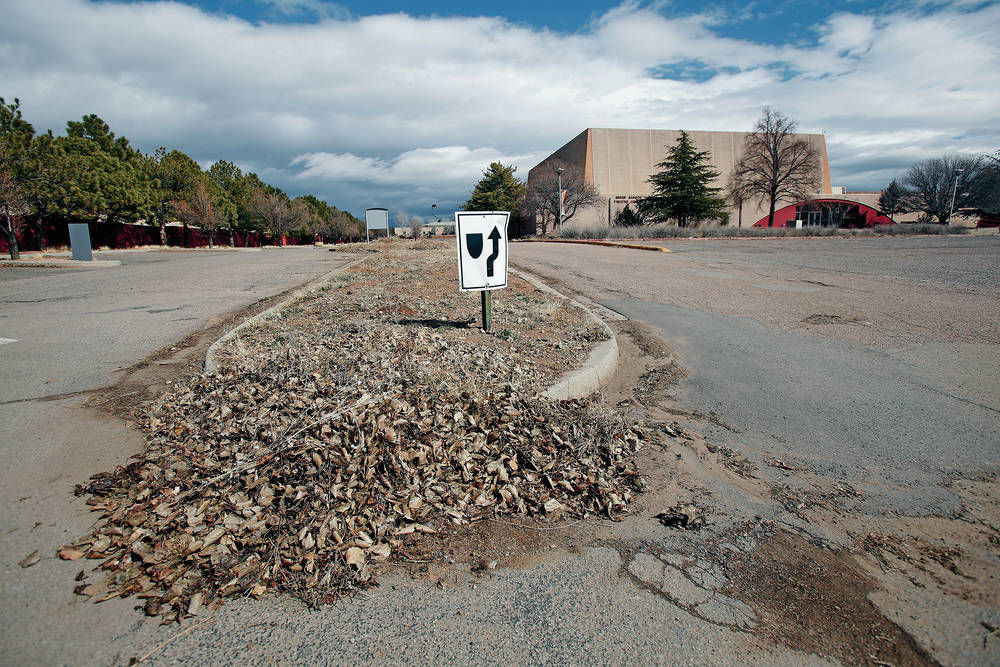 Leaves have accumulated on the medians at the former Santa Fe University for Art and Design, seen Monday. The city wants a handful of the 32 buildings to remain, such as the Greer Garson Theatre, but the rest could be renovated or demolished. Luis Sánchez Saturno/The New Mexican 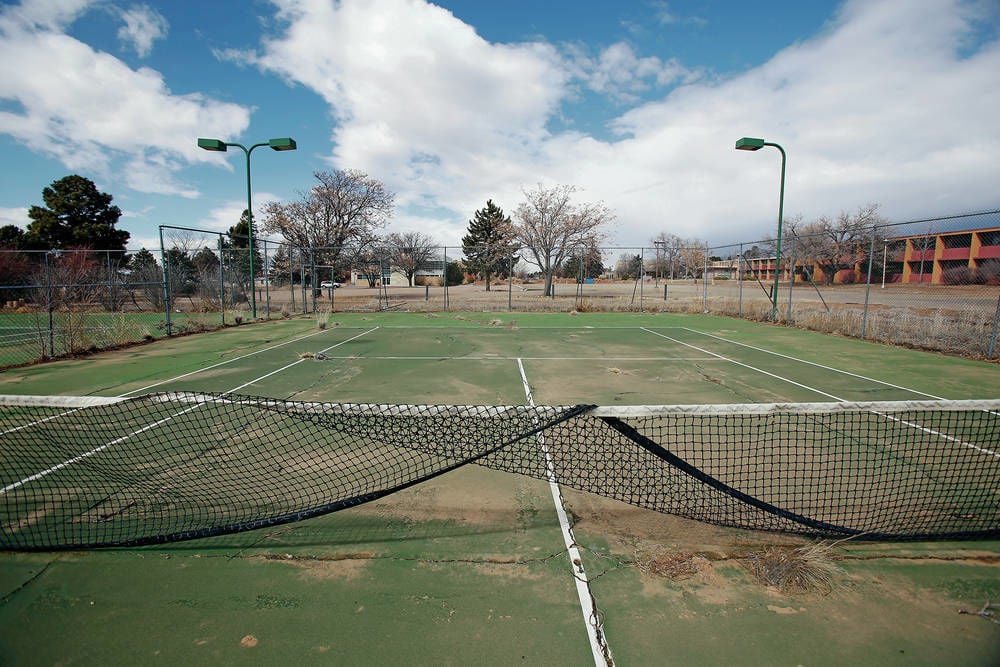 Leaves have accumulated on the medians at the former Santa Fe University for Art and Design, seen Monday. The city wants a handful of the 32 buildings to remain, such as the Greer Garson Theatre, but the rest could be renovated or demolished. Luis Sánchez Saturno/The New Mexican

The city of Santa Fe intends to issue a request for proposals from developers this spring to determine the future of the midtown campus of the defunct Santa Fe University of Art and Design. It’s the next step in a redevelopment gestation period that could take half a decade or longer.

The 66.55-acre property on St. Michael’s Drive has mostly been a ghost town since the university closed in May, though roughly 15 to 20 percent of it remains in use.

A request for proposals will go out sometime in the second quarter of the year with no clear-cut deadline for responses, said Daniel Hernandez, a city consultant who is the project manager of the midtown property — seen by many as a critical, and perhaps fragile, jewel in the city’s future.

“I’m going to give enough time for people to put together good, sound proposals, said Hernandez, owner of Proyecto, a Solvang, Calif., real estate advisory firm. We want to find proposals that are ready to go.”

The end game for the property is by no means certain, in part because the implementation stage will be dependent on national economic factors, Hernandez said.

“I would say five to seven years before it’s kind of complete,” he said.

The city wants a handful of the 32 buildings to remain, such as the Greer Garson Theatre, but acknowledges the rest could be renovated or demolished. Mayor Alan Webber noted something needs to happen to bring the campus, which is tucked off a curve on St. Michael’s Drive, more front and center.

“It is cloistered,” Webber said. “Where’s the front door?”

Webber said the basic vision — vetted through several community input sessions in the past year and a half — calls for reviving the midtown property as a mix of housing, education and economic diversification, with an entertainment/technology module similar to the existing Greer Garson Studios currently used by film production companies.

Webber said he is willing to alter the concept if a compelling proposal comes along that does not fit the housing/education/tech model.

“We gave ourselves flexibility; if somebody appears with a brilliant idea that’s hard to pass up, we can bring that idea to the City Council,” the mayor said.

The city of Santa Fe purchased what was then the College of Santa Fe campus from the Christian Brothers of New Mexico in 2009 for $29.615 million. The city then brought in the Santa Fe University of Art and Design as a tenant to replace the college, which closed at that time. The city is paying off the purchase at the rate of $2.23 million per year until 2036.

Though the campus is already beginning to show significant signs of going fallow, with weeds taking over some areas, other areas retain signs of life. Buildings remaining in use house The Screen, Green Garson Studios, two apartment dormitories used by the Santa Fe Recovery Center, and the Driscoll Fitness Center, which is operated by the Santa Fe Parks & Recreation Department.

Webber said the campus still has potential to continue to contain some kind of educational component, adding he would like to bring the Santa Fe Higher Education Center, which adjoins the midtown property, into the project. Santa Fe Community College, the University of New Mexico, Highlands University and Northern New Mexico College teach courses at the center.

Webber said Matt Brown, the city’s economic development director, has been in discussions with a variety of educational institutions, ranging from Santa Fe Community College to the University of New Mexico to Texas A&M. Brown also has spoken to Triad National Security, the new manager and operator of the Los Alamos National Laboratory, of which the Texas A&M University System is a partner.

“We can have a premier education consortium,” Brown said. “There are people who want a think tank, an accelerator, [business] incubators. There are people intrigued by this unique opportunity.”

The request for proposals comes after the conceptual stage of the three-stage process to determine a future for the property. Next up: Evaluating developer proposals and determining which direction to go.

The first step would be infrastructure improvements that could be done in 2020, with that year also potentially seeing the first steps in redevelopment, Brown said.

Chris Webster, a veteran Santa Fe real estate broker and development and investment consultant, is having conversations with city officials and developers across the country about the midtown property.

“The potential is extraordinary,” said Webster, noting the property’s location, infrastructure already in place, zoning density and potential city development incentives. “[The city needs] to intelligently figure out the highest and best use of the property for today.”

The midtown campus is at the west end of the city’s Midtown Local Innovation Corridor Overlay District, which runs along St. Michael’s Drive to Christus St. Vincent Regional Medical Center. The overlay district allows for variations to the standard zoning in the city. Specifically, four-story structures will be allowed in the area rather than the standard three-story maximum, said Carol Johnson, the city’s land use director.

“We want the property to be more walkable and bikeable and have mixed-use development,” Johnson said.

Regardless of what may come, Webber said he wants the new iteration of the property to stand out.

“We need to have an iconic building,” Webber said. “Santa Fe has strong rules of who we are. Maybe there can be a contemporary feel that is more walkable and bikeable. … We want to respect the history and tradition of our city. What happens needs to look and feel like Santa Fe.”