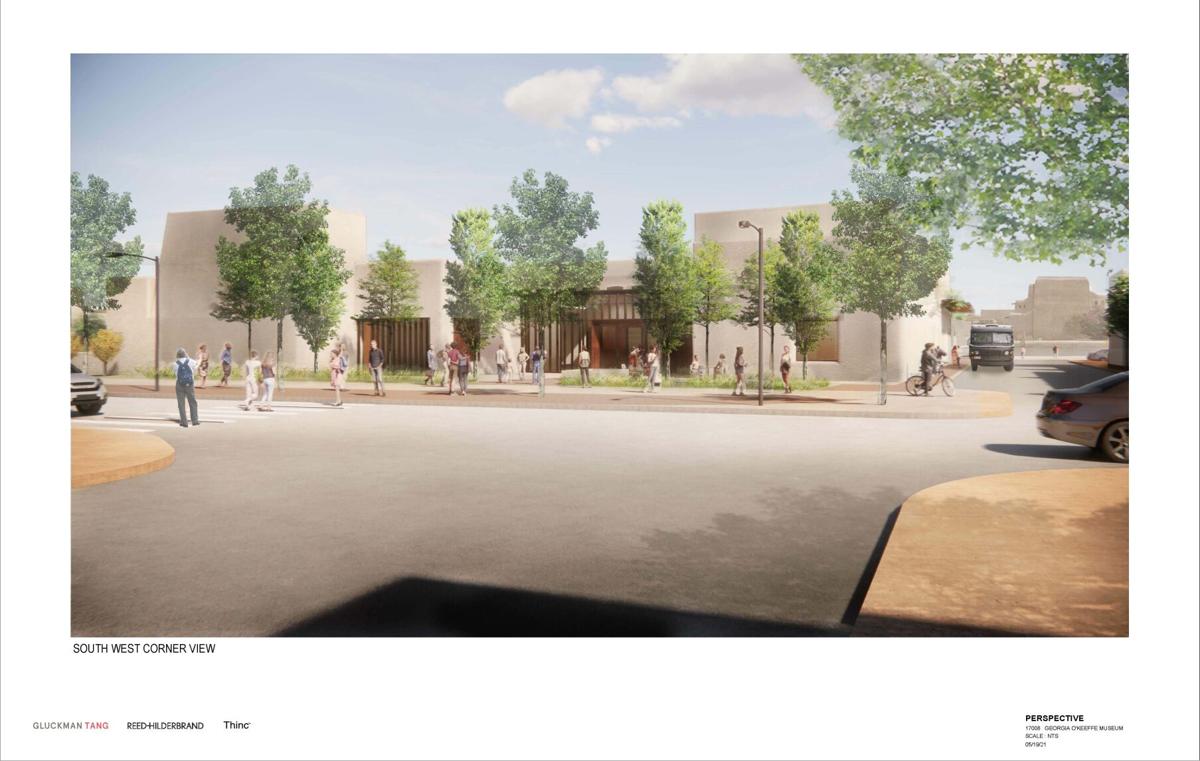 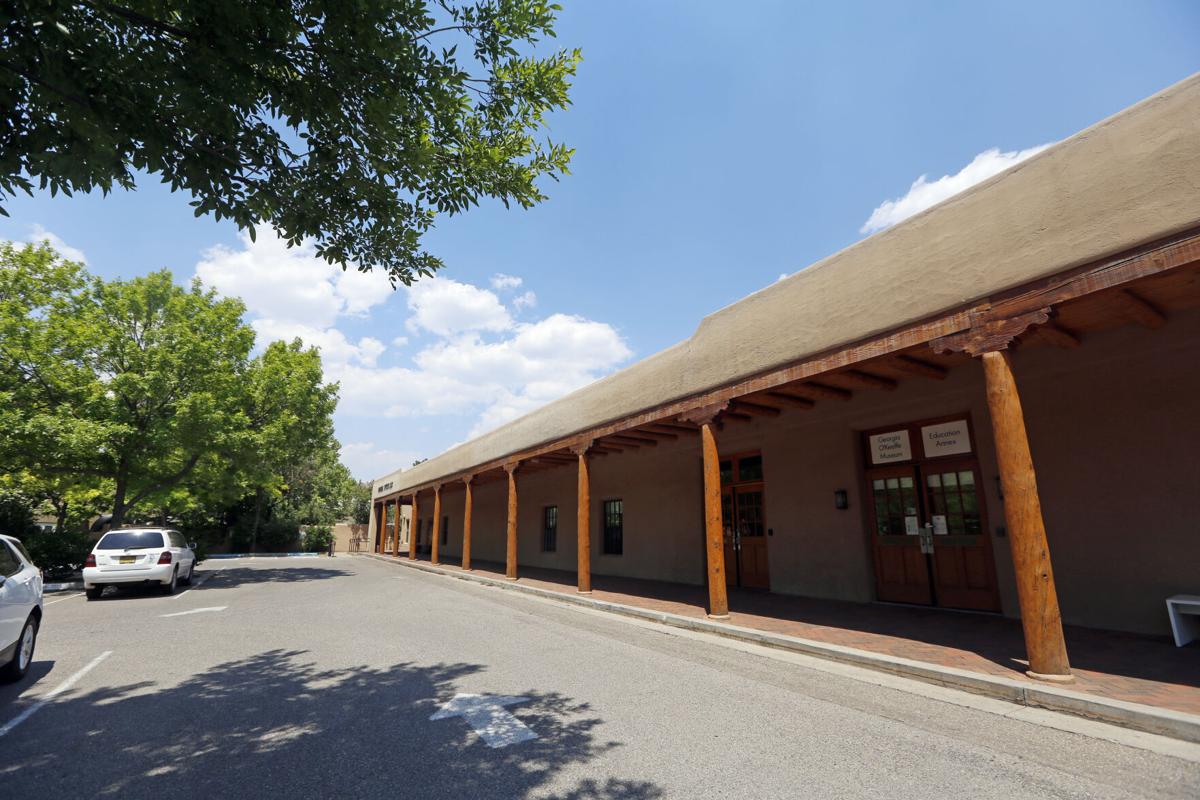 The Georgia O’Keeffe Museum education annex on Grant Avenue, seen Monday, is set to be the site of a $60 million expansion to the museum. 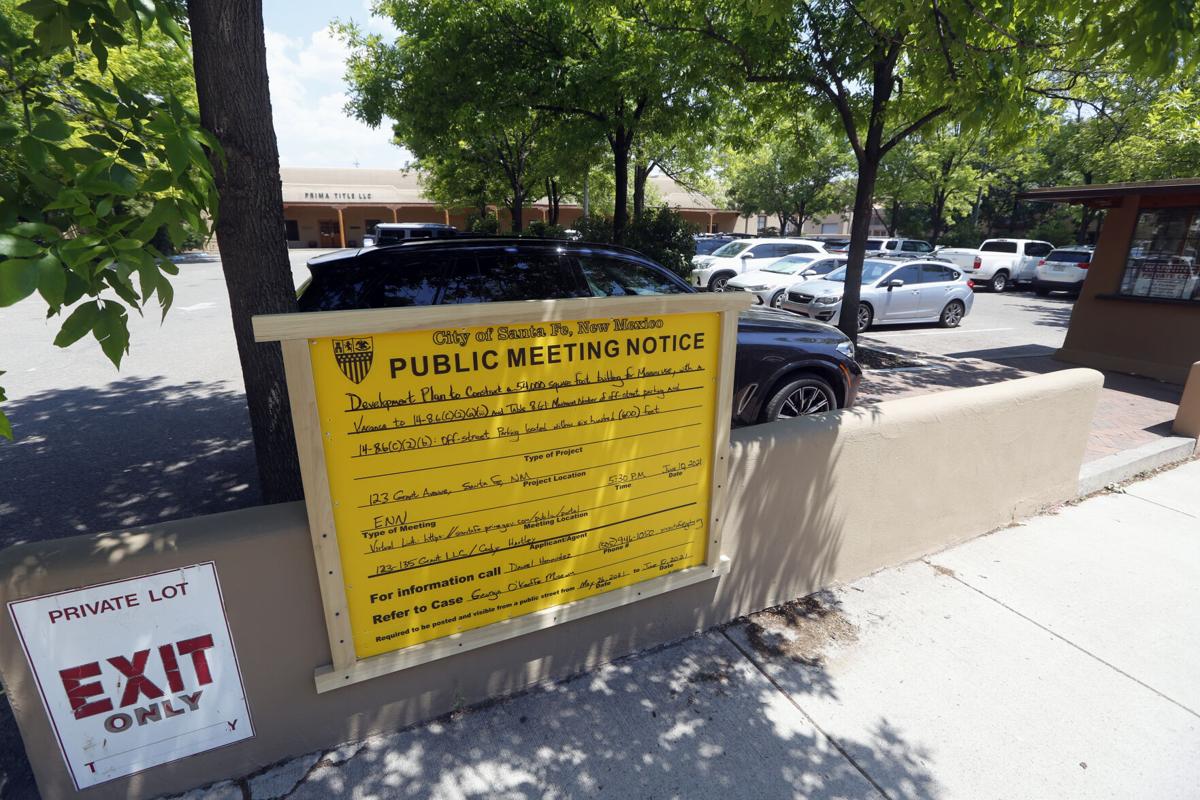 A sign in front of the Georgia O’Keeffe Museum education annex announces a public meeting about the museum’s planned expansion at the site. 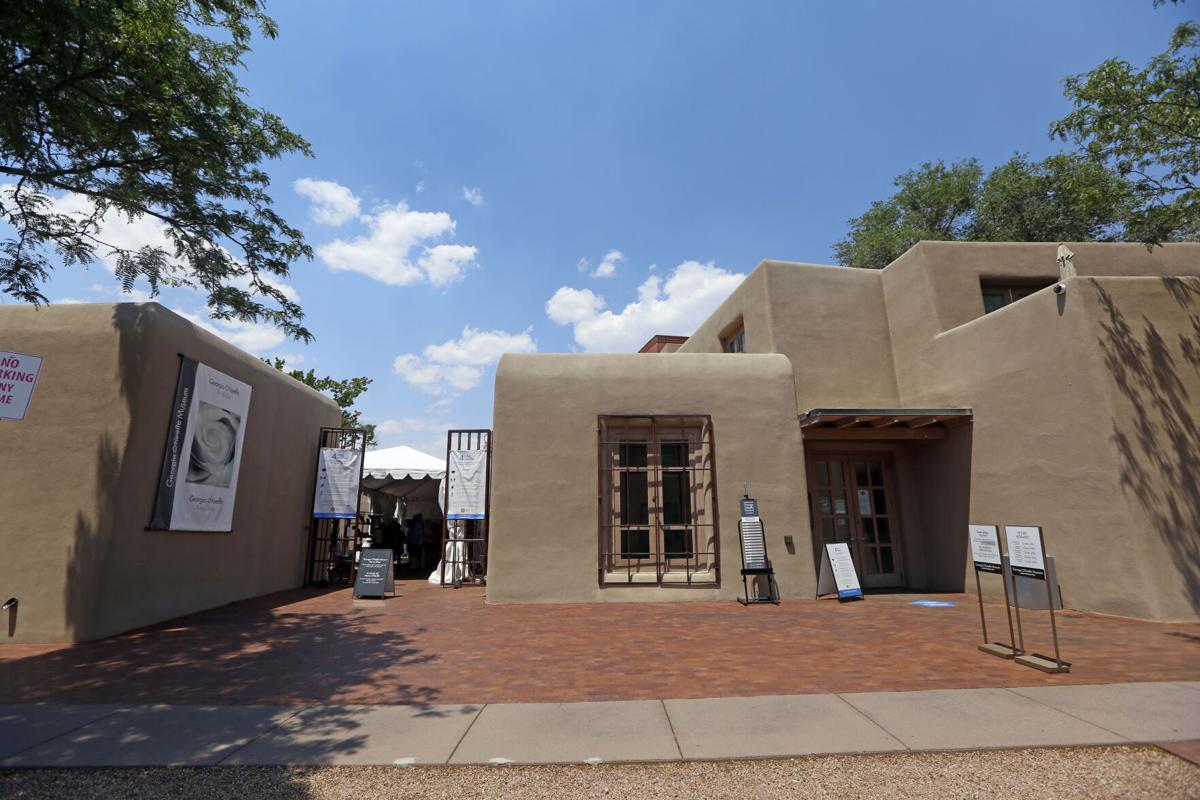 The Georgia O’Keeffe Museum, seen Monday, is expanding to the site of its education annex. 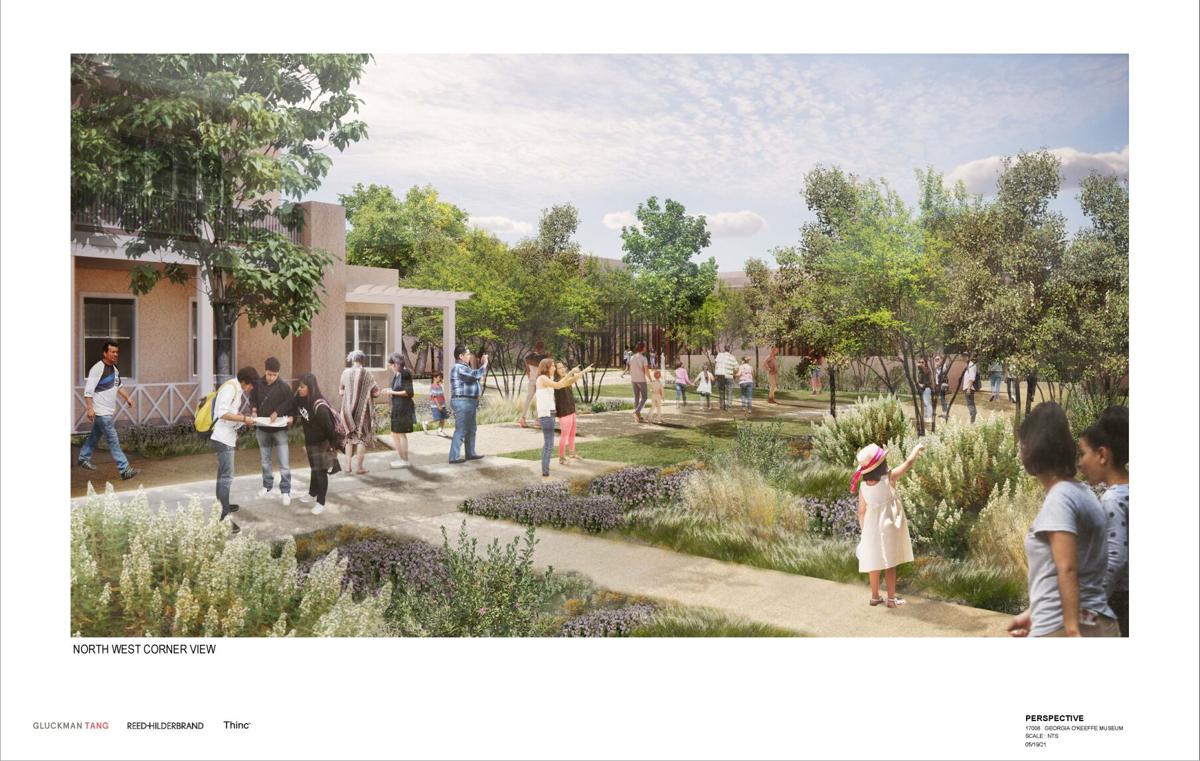 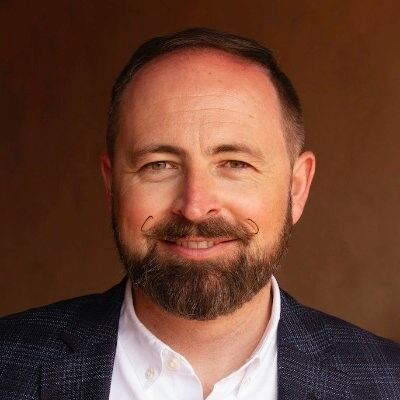 The Georgia O’Keeffe Museum education annex on Grant Avenue, seen Monday, is set to be the site of a $60 million expansion to the museum.

A sign in front of the Georgia O’Keeffe Museum education annex announces a public meeting about the museum’s planned expansion at the site.

The Georgia O’Keeffe Museum, seen Monday, is expanding to the site of its education annex.

The Georgia O’Keeffe Museum of the future will fill nearly an entire city block.

Museum leaders intend to build a 54,000-square-foot museum on the site of the former Safeway at 123 Grant Ave., now occupied by the museum’s Education Center and Prima Title.

The museum will publicly reveal its intentions at 5:30 p.m. Thursday at an online early neighborhood notification meeting required by the city for certain construction projects.

A museum expansion onto the east side of Grant Avenue has been quietly in the works since the O’Keeffe museum on Johnson Street opened in July 1997, but in recent years the expansion evolved into an outright relocation.

The existing museum would become an annex. Ultimately, museum leadership could decide to depart from that building altogether, director Cody Hartley said.

“The vast majority of visits will be on this block,” Hartley said of the Grant location. “Let’s create the building we need.”

In May, the museum gained ownership of the entire Grant-Marcy-Sheridan block minus the Palace Avenue retail buildings.

The museum owns the former Safeway building, where its Education Center is located; the 1870s Bergere House, where museum administrative offices as well as library, archives and research center are located; and the two-story, 19,362-square-foot office building at Marcy Street and Grant, where the Sommer Udall Law Firm and the museum have offices.

Museum founder Anne Marion acquired the 2.54-acre property in 2001 through her family’s Burnett Foundation. Marion died in February 2020, and the foundation transferred the property to the museum in May.

“Her passing was the beginning of a new era,” Hartley said.

The new museum is expected to cost more than $60 million, Hartley said.

Hartley hopes to pull demolition permits by the end of the year. Design work will take up most of 2022 with construction potentially starting in late 2022 or early 2023 and the new museum possibly opening by the end of 2024, Hartley said.

The new museum will be one story with a basement, which will have 24,000 square feet dedicated to consolidating storage for the museum’s collection of more than 3,000 works, including 140 O’Keeffe oil paintings and nearly 700 drawings.

The new building will have 13,000 square feet of gallery space for permanent and temporary exhibitions, with the ability to combine the space. There will be a lecture hall and classroom that can also be combined as a larger space, and there will be a gift shop and large lobby, Hartley said.

The museum opened in 1997 with 40 O’Keeffe paintings. In 2006, it obtained additional paintings from the Georgia O’Keeffe Foundation.

“This little museum had to prove itself so that museums could trust us with their works,” said Hartley, who joined the museum in 2013 and became its director in 2019. “Now we are a leading American museum, internationally known and highly regarded for our expertise. We are among the smallest accredited museums by the American Alliance of Museums.”

Museum officials plan to combine the 8,879-square-foot Bergere House, which has a large garden, with the Education Center to create a large community gathering place landscaped with more suitable regional plants.

Hartley wants the new museum to be a draw for locals. The existing museum has 85 percent out-of-state attendance, and it reaches only 10 percent of Santa Fe school children.

“We want to make sure we have the capacity to reach every school child in Santa Fe with enough classroom space and bus loading areas,” he said.

The Sheridan Avenue side of the museum property is the city’s bus transit center. Hartley wants to collaborate with the city to improve that space.

He also wants the museum to be as much about New Mexico and its people as it is about the art of Georgia O’Keeffe.

“It begins with recentering on the people of New Mexico in our story,” he said. “We want to tell a story that is as much about the place and people. We can tell the story of the landscape and people. I love the idea to have a place for locals to help [with] education and inform visitors of our story.”

The museum also owns the O’Keeffe home and studio in Abiquiú as well as her home at Ghost Ranch.

Hartley said preliminary plans for a new museum were brought to him when he started at the museum in 2013 as senior director of collections and interpretation or “chief curator.” And expansion has been an ambition since 1997.

“We have been quietly working away,” he said. “We haven’t made any huge announcements.”

It's clearly lost on everyone (including those concerned about parking) that a local museum can pony up 60 mil for a giant new complex, mostly from wealthy donors, I imagine, while we still have hundreds of homeless living in riverbeds and under overpasses, many of them veterans.

Is there a plan for adequate parking?

This article needs a correction: the O'Keeffe Museum does NOT own Ghost Ranch, the Education and Retreat Center in Abiquiu. What they own is O'Keeffe's home at the Ghost Ranch. The Educational Center is owned by the Presbyterian Church, USA.

LOL The museum wants to draw locals but everyone one of its architects is from out of state. Too bad we lost historic buildings (little brick homes) for the current museum only to have this bldg ultimately abandoned. Let's hope it does not produce the controversy that the Vladim has.

Agree with Stephanie’s point and question why all the architects and exhibits designers are from NY or wherever but not NM. What’s that about?