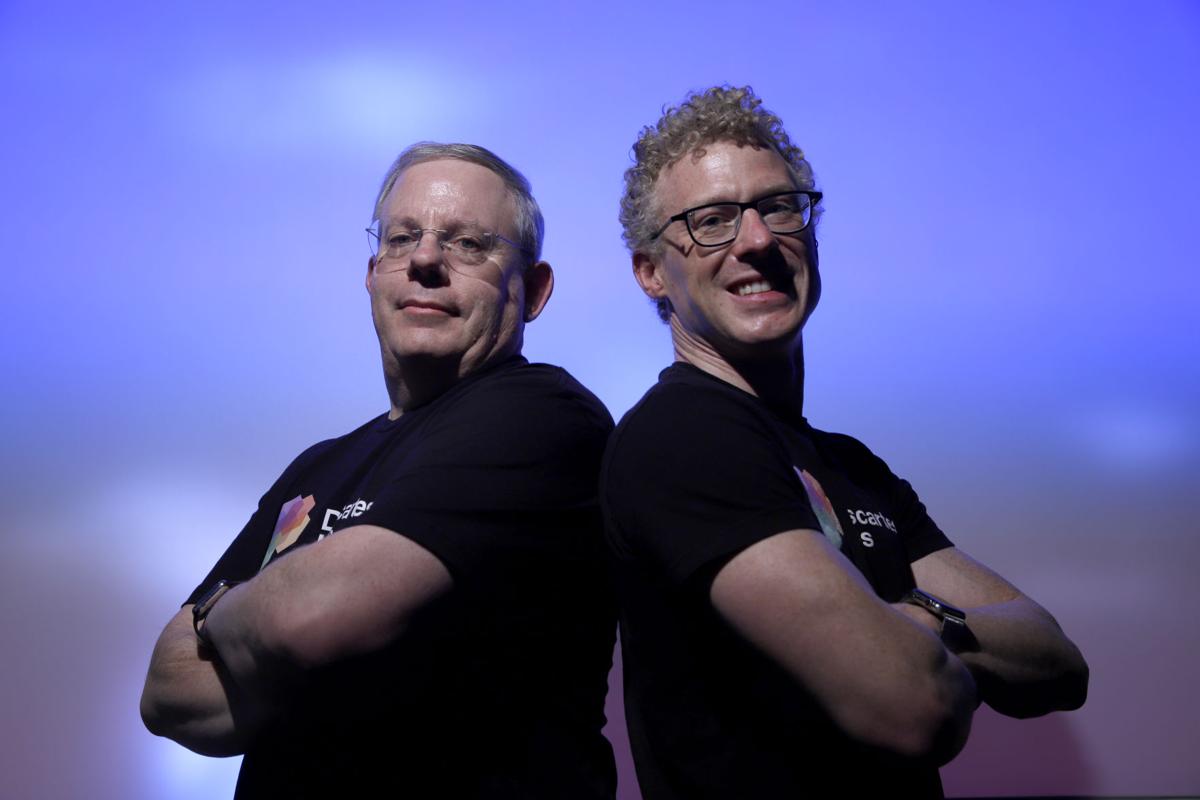 Descartes Labs co-founder Mark Johnson, above right, is handing the position of CEO to Phil Fraher, left. Founded 5½ years ago in Los Alamos, the company has since moved its headquarters to downtown Santa Fe and now has 115 employees. 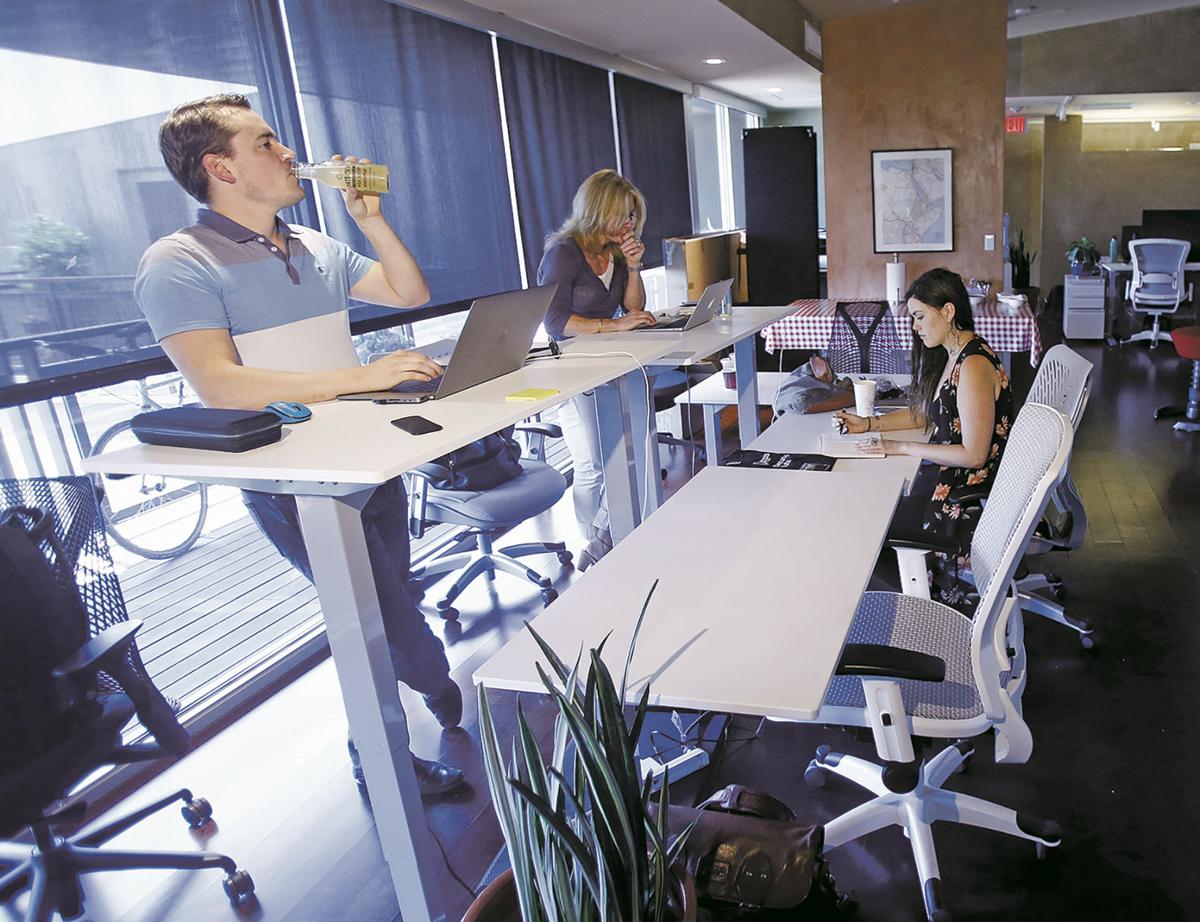 Descartes Labs employees at work in 2018. Founded 5½ years ago in Los Alamos, the company has since moved its headquarters to downtown Santa Fe and now has 115 employees throughout the country.

Descartes Labs co-founder Mark Johnson, above right, is handing the position of CEO to Phil Fraher, left. Founded 5½ years ago in Los Alamos, the company has since moved its headquarters to downtown Santa Fe and now has 115 employees.

Descartes Labs employees at work in 2018. Founded 5½ years ago in Los Alamos, the company has since moved its headquarters to downtown Santa Fe and now has 115 employees throughout the country.

Descartes Labs, the onetime tech startup that has grown to be a Santa Fe business success story, has a new chief executive officer.

The company announced early Friday that CEO and co-founder Mark Johnson, who has led the company since its start in 2014, is handing the reins to Phil Fraher, 54, who joined Descartes Labs in September as its chief financial officer.

The move was made official on New Year’s Day, Descartes Labs officials said, with Johnson, 41, remaining at the company in the newly created role of executive chairman, a nonoperational position.

“I can focus on what I am best at, which is telling the Descartes Labs story,” said Johnson, who received his bachelor’s in philosophy from Stanford University and named the company after the noted French philosopher. “There is something about the early, you-can’t-explain-the-technology phase that really excites me.”

In his new role as executive chairman and majority shareholder, Johnson will focus on the company’s large customers, its vision and speaking engagements far and wide. He will travel to Davos, Switzerland, this month to represent Descartes Labs as one of 56 Technology Pioneers of 2019 at the World Economic Forum.

The change in leadership signals the evolution of Descartes Labs — which creates technology for satellite imagery analysis — into an established company that is firmly in growth mode.

Descartes Labs has grown to 115 employees throughout the country and operates in a 18,000-square-foot facility in downtown Santa Fe. The company started 5½ years ago with a handful of Los Alamos National Laboratory scientists and Johnson as CEO in an office above a pizza joint in Los Alamos.

The company won’t disclose its annual revenue but acknowledged it is above $10 million. Descartes Labs also has raised $60 million from investors. About three-quarters of its employees are paid more than $100,000 a year.

“There are a number of tech companies that have come up in recent years,” said Marie Longserre, CEO of the Santa Fe Business Incubator, where numerous tech companies get their start. “Of this group, Descartes Labs was the first and is now the biggest and has a real big impact to attract talent to Santa Fe.”

Johnson said that “it took some serious soul-searching from me to decide this was the right move,” though he said Fraher’s arrival made the decision clearer.

“You should always hire somebody who has the potential to be your replacement,” he said.

Both executives said they worked closely together after Fraher’s arrival and both saw Fraher was equipped to take Descartes Labs through its next growth stage.

Fraher, with a bachelor’s degree in computer science from Auburn University and an MBA from the University of Rochester, is no stranger to corner offices, having served as a chief executive, chief financial officer and chief operating officer during his career.

“This guy can play a lot of roles here,” Johnson said.

Fraher is a finance expert, though one who relishes marketing and public relations.

“Last year, we built a marketing team,” Fraher said. “We will do a lot more PR this year, a lot more lead generating for the sales team. We will scale out in support operations for customers. What I love to do is scale companies to grow in an appropriate way.”

Fraher comes from Austin, Texas, where he was CFO for 1½ years at Zilliant, a pricing and sales growth solutions company. He said the lifestyle change attracted him to New Mexico.

“It’s getting crazy there,” Fraher said about living in downtown Austin. “It would take me five minutes to get to the office and 20 minutes to get home. I wasn’t looking to leave. When Santa Fe called, I said OK. It’s more about the opportunity.”

Fraher described himself as a “nomad,” having grown up in Connecticut but attending college in the Deep South at Auburn. He lived for 10 years in Houston, working as CEO of FuelQuest for four years. He also was president and CFO at Bask, a device support company in Orem, Utah.

Descartes Labs’ innovation has been the key to its growth and success.

“A lot of the secret sauce of Descartes is how to take huge sets of data, process it — clean it up — and do something with it, build a model,” Johnson said.

“We were able to predict a corn yield increase of 3 percent, which was better than the Department of Agriculture, and that changed the company forever,” Johnson said.

Descartes Labs has had a couple of contracts with the Defense Advanced Research Projects Agency, or DARPA. Those involved monitoring and forecast wheat crops across the Middle East and North Africa and work on geospatial cloud analytics.

The company has 70 employees in Santa Fe and others in San Francisco, New York, Denver and Fairbanks, Alaska. Its office at North Guadalupe and West Alameda streets has capacity for about 120 to 150 people.

“Descartes is a local homegrown business, which has expanded because of their diligence in receiving outside and local funding,” Rich Brown, the city’s economic development director, wrote in an email. “They have a strong local civic engagement as well as putting Santa Fe on the national radar when their technology helped stopped the spread of wildfires in Northern California.”

State and city government have bet on Descartes Labs on several occasions. The state Economic Development Department five times between August 2015 and August 2018 awarded the company a combined $397,248 in Job Training Incentive Program reimbursements to train 14 employees who would be paid an average of $57.91 per hour, a department spokesman said.

Johnson fully intends for Descartes Labs to live up to all the government incentives.

“At some point you have to IPO [initial public offering] or be acquired,” Johnson said. “That is not the explicit goal now. The goal is to build something of extreme value. … If we don’t become a planetary data refinery, someone else will do it. I want to do it first.”