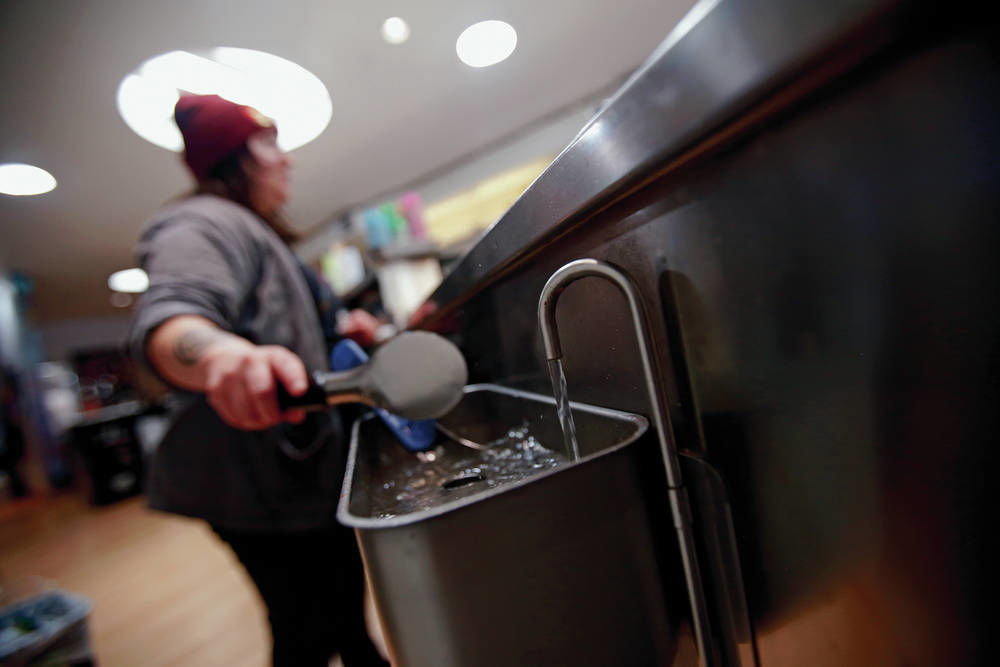 Kayla Herrera of Santa Fe retrieves a paddle from a dipper well sink while serving a customer at ECCO Espresso and Gelato on Monday. ECCO is among seven restaurants in Santa Fe that have installed a Phyn Plus device to detect water flow anomalies as the city looks for ways to further cut water usage in the commercial sector. Luis Sánchez Saturno/The New Mexican 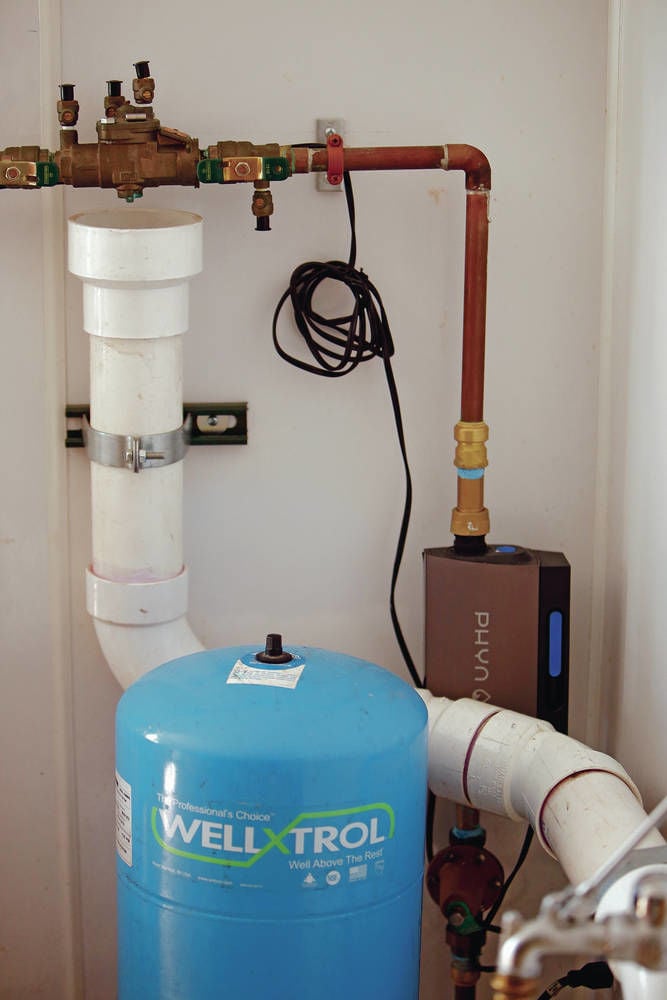 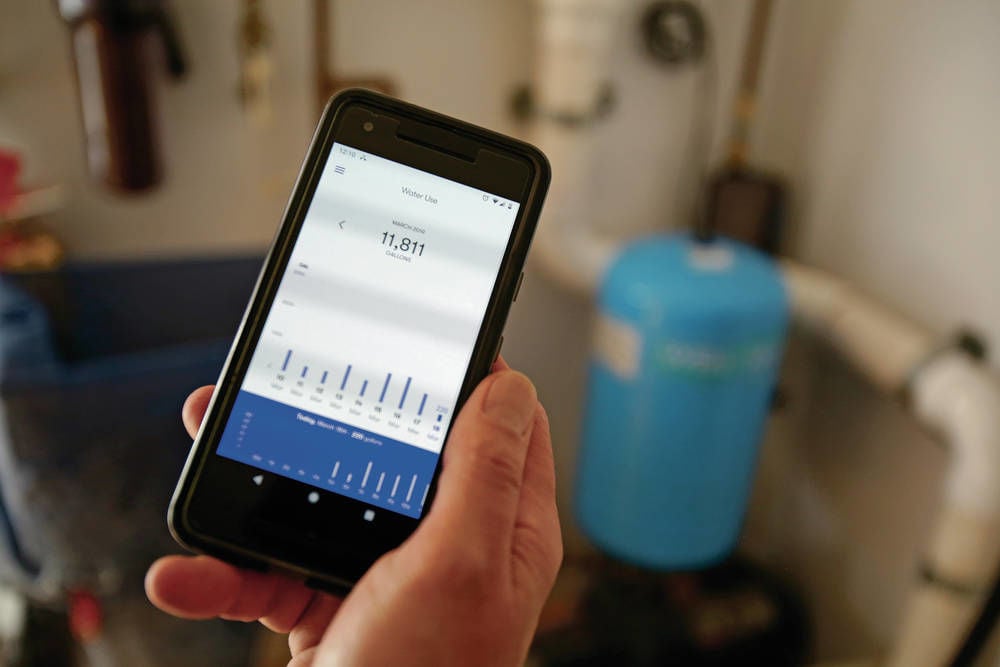 Matt Durkovich, owner of ECCO Espresso and Gelato, checks the shop’s daily water usage chart on his phone. ECCO is among seven restaurants in Santa Fe that have installed a Phyn Plus device to detect water flow anomalies as the city looks for ways to further cut water usage in the commercial sector. Luis Sánchez Saturno/The New Mexican

Kayla Herrera of Santa Fe retrieves a paddle from a dipper well sink while serving a customer at ECCO Espresso and Gelato on Monday. ECCO is among seven restaurants in Santa Fe that have installed a Phyn Plus device to detect water flow anomalies as the city looks for ways to further cut water usage in the commercial sector. Luis Sánchez Saturno/The New Mexican

Matt Durkovich, owner of ECCO Espresso and Gelato, checks the shop’s daily water usage chart on his phone. ECCO is among seven restaurants in Santa Fe that have installed a Phyn Plus device to detect water flow anomalies as the city looks for ways to further cut water usage in the commercial sector. Luis Sánchez Saturno/The New Mexican

The toilets at Ecco Espresso and Gelato in downtown Santa Fe might get flushed as many as 300 to 500 times a day.

At 1.2 gallons per flush, that’s upward of 500 gallons down the drain in one day.

Imagine every toilet at every restaurant among the 400 or so restaurants in Santa Fe, many of them flushing at rates of 1.6 or 3.5 gallons. Multiply that out for the 4,800 hotel and motel rooms in the city.

The city of Santa Fe, which through steep water rates and various conservation efforts over the years has managed to reduce per capita consumption, is looking for ways to further cut water usage in the commercial sector, starting with restaurants and later this year with hotels — both high-usage industries.

Santa Fe has cut water usage nearly in half since 1995, much of that from targeting residential consumption. The city has determined commercial users consume 801 million gallons of water per year, said Christine Chavez, the city’s water conservation manager.

She said that Santa Fe’s water usage in gallons per capita per day, or GPCPD, was 168 gallons per day in 1995. Robust residential water conservation programs sliced that to 90 gallons per day by 2017. Part of the decreased water usage came as water bills rose, with rates at one point increasing 40 percent over a five-year period up to 2013.

“If we want to bring that 90 even lower, we have to work with the commercial side,” said Chavez, who doesn’t have a specific goal. “We just want to keep going lower.”

A pilot program started in November involved the city, Santa Fe Green Chamber of Commerce and a Los Angeles water-monitoring technology company called Phyn in an effort to unveil the nearly entirely unknown mysteries of water usage at restaurants.

“Working with 31 restaurants in the pilot program, one thing we did come across is most are not individually metered and are in very old structures,” Chavez said. “They have no way of knowing how much water they use. Only two of the 31 restaurants are metered.”

“There were visual inspections of all the equipment to assess if replacement would save water, and [we checked] for leaks,” Schiffbauer said.

The littlest thing can gulp huge volumes of water. Schiffbauer and Pushard installed 130 faucet aerators at the 31 restaurants to achieve a collective water savings of 450,000 gallons per year — enough to fill 20 backyard swimming pools.

“You just don’t appreciate where it goes and how quickly it goes,” said Matt Durkovich, owner of Ecco Espresso and Gelato. “Water is unyielding and brutally unforgiving, especially at restaurants.”

Seven of the 31 restaurants in the first pilot program continued to a second pilot in February by installing a small Phyn Plus device that detects microvibrations in water that the software can decipher as leaks or faucets left on or other anomalies in how water flows. The Phyn Plus determines a “unique fingerprint” for water usage at each water appliance, Phyn CEO Ryan Kim said.

The restaurants with the Phyn Plus are Sweetwater Harvest Kitchen, Joe’s Dining, Tecolote Cafe, the Ranch House, Restaurant Martín, the Pantry Restaurant, and Ecco Espresso and Gelato.

Ecco is in a newer building where water conservation measures are already in use, but Durkovich already has seen that employee behavior plays as much a role in water consumption as the equipment.

“I’m finding out the days and times water flows are high,” Durkovich said. “Who’s the employee who loves to full blast when washing dishes? In terms of doing dishes, how high do you fill the sink? Do we need full bore to rinse? I want to develop a plan for employees to make water use as efficient as possible.”

Chavez in April expects to take two commercial water conservation rebate proposals to the City Council. One would be a cash rebate based on a calculation that puts the value of 1 acre-foot of water (325,841 gallons) at about $15,000. The rebate would be based on how much of an acre-foot the business saved. A second option would focus on business practices to save water, such as using less water to wash and rinse dishes.

“There is equally as much potential with the behavioral component as with changing equipment,” Chavez said.

The commercial water conservation project grew out of the Next Generation Water Summit in Santa Fe in April, where Chavez met representatives from Uponor, Phyn’s Finland-based parent company.

Phyn, based in the Los Angeles suburb of Torrance, until now has focused almost entirely on residential water systems with just a handful of light industrial and high-rise apartments. Santa Fe is its first restaurant project and only second government partnership along with Southern Nevada Water Authority in Las Vegas.

“Anywhere there is plumbing, we are interested,” Kim said about teaming up with Santa Fe. “We want people to be aware of water flows and prevent wastage.”

Toilets are a logical target in a water conservation campaign, and a toilet retrofit program during the 2000s helped cut water usage in the city.

“Toilets use a lot more water at restaurants than anyone would have thought,” said Pushard, founder of HarvestH2o.com.

Old, pre-1980s toilets use up to 6 and 8 gallons of water per flush, but the standard toilet these days is 3.5 gallons. Ultra-low-flush and high-efficiency toilets have brought that down to 1.6 gallons and 1.3 gallons, with new toilets now on the market achieving a flush at 0.8 gallons.

The 31 Santa Fe restaurants audited included two eateries with 0.8-gallon tanks, 20 percent with the 1.6-gallon toilets and the majority at 1.3 gallons, Pushard said.

Durkovich believes the Phyn device will enable him to save 15 percent to 20 percent in water usage and more than 20 percent if he brings in 0.8-gallon toilets.

Chavez regards the Phyn device as a water submeter. It’s not a costly, large traditional water meter but an 8.43-inch by 5.6-inch, flat, smartphone-connected device that is installed on the main waterline before it reaches any appliances.

“If the Phyn unit works, maybe we can incentivize restaurants to find a submetering unit like Phyn,” Chavez said.

The Phyn Plus can measure overall water usage, along with its primary purpose of detecting changes in normal water flows.

No estimates or predictions have been made on how much water can be conserved with the commercial program. Phyn has no past restaurant measures, so the only data that exists is that generated in Santa Fe.

“It’s just too early in the study to make far-ranging predictions,” Kim said.