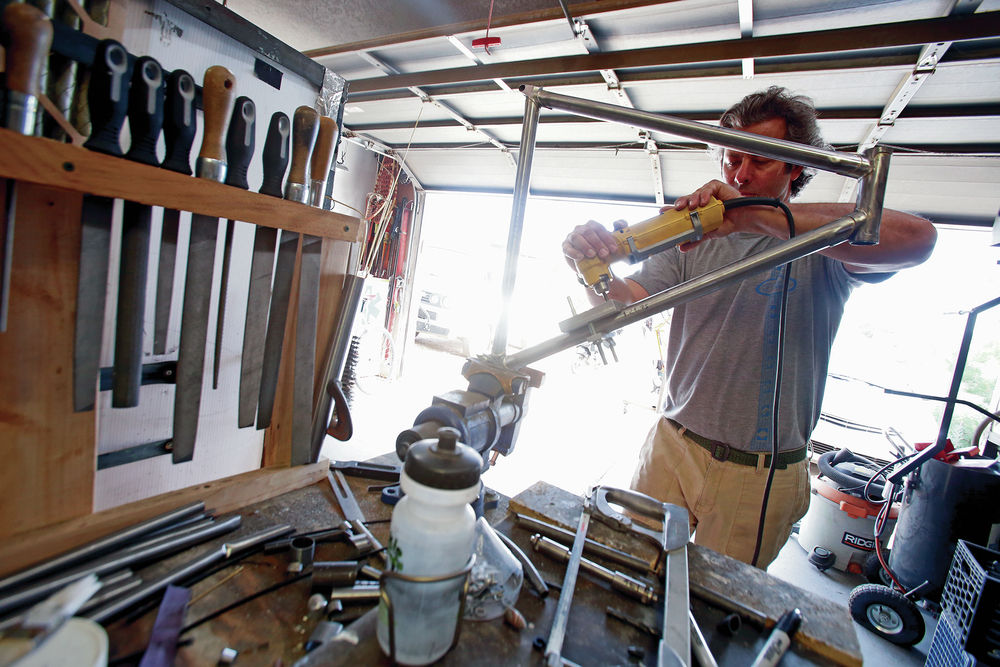 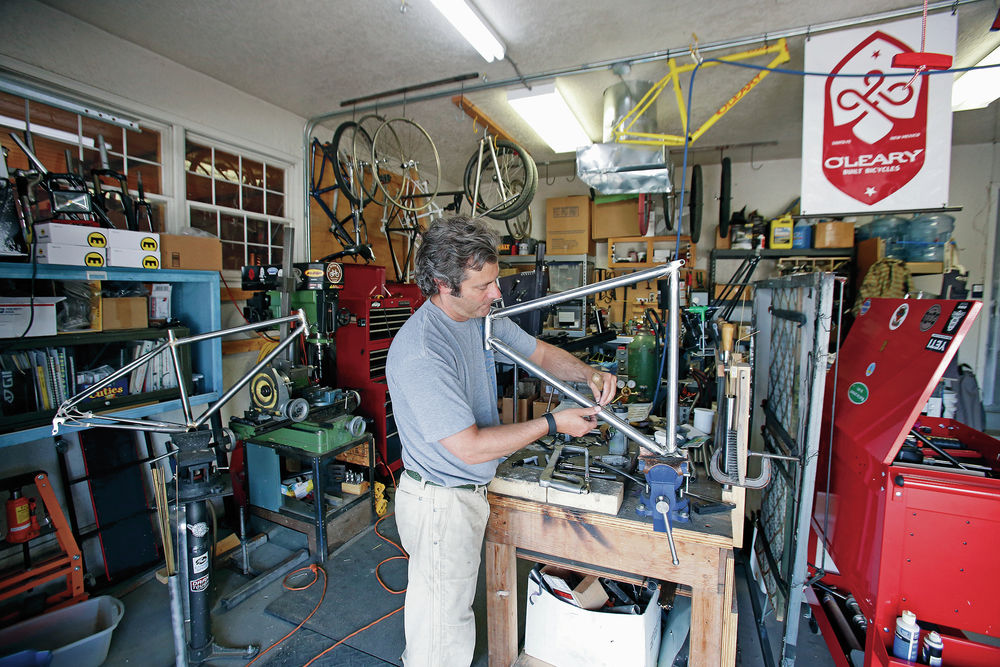 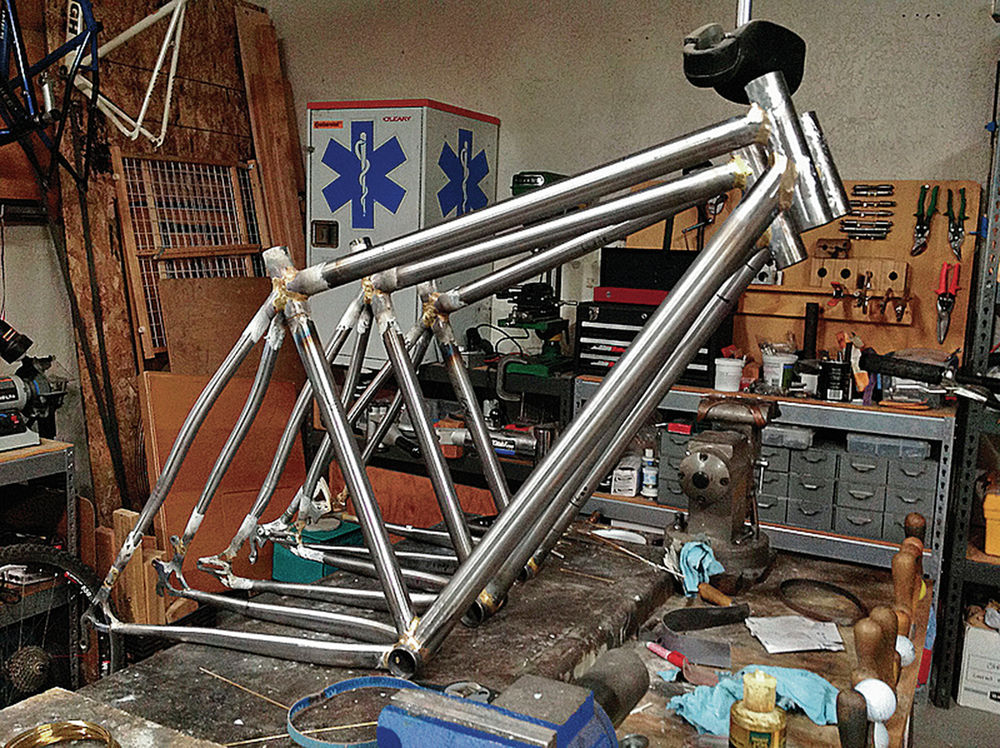 Charles O’Leary builds a bicycle last week in his garage at his Santa Fe home. O’Leary works on his frames and bicycles on the weekends and in the evenings after his day job as the executive director for the Santa Fe Conservation Trust. Luis Sánchez Saturno/The New Mexican

Most people know how to ride a bike, but few can maintain their two-wheeled machines, much less build them from scratch.

Charlie O’Leary has made it his business to build steel bike frames by hand, a feat more impressive given that Santa Fe isn’t known for its manufacturing industry. “There’s a lack of people building stuff,” O’Leary said.

O’Leary Bicycles is headquartered out of O’Leary’s home in a neighborhood off Zia Road where he lives with his wife, Lily, and cats Tiger, Merlin and Shanti. The garage, however, is O’Leary’s domain.

Tools cover every flat surface in the garage. A blowtorch is perhaps the most exciting tool. It’s used to weld the steel tubes that make up an O’Leary frame. Several completed bicycles, road and mountain, hang in the front of the garage. Uncompleted silver steel frames hang from the ceilings or rest on a workbench.

While growing up in Albuquerque, O’Leary’s family briefly ran a bicycle shop. He always grew up riding, and that passion has never left him. He said he knew he wanted to make bikes.

“These things come from someone,” O’Leary said. “Someone has to put them together.”

His wife sent O’Leary to a bicycle frame-crafting intensive workshop on the West Coast for his 40th birthday. O’Leary, a bit of a perfectionist, tried to study ahead of time and bought a manual to help him learn the craft.

“But I couldn’t make heads or tails of the manual,” O’Leary said.

The intensive had students working eight uninterrupted hours, O’Leary said. The class concluded with a half-daylong warning about the difficulty of making frames professionally. But O’Leary was undeterred. He decided then and there he would sell his frames on the market. He started his business in 2006.

These days, O’Leary works on his frames and bicycles on the weekends and in the evenings after his day job as the executive director for the Santa Fe Conservation Trust.

The average frame, he said, takes about 40 hours of work. But given the time O’Leary has to work, it usually takes him two months to complete a frame. That wait might be longer if the customer has asked O’Leary to add other parts to the bike such as the pedals, gear shifters or wheels.

An O’Leary frame generally runs about $1,250, mountain or road. He charges extra for additional parts and labor involved with building a full bicycle.

Many of O’Leary customers want a one-of-a-kind frame — bragging rights, if you will. For others, a custom frame is a necessity for comfortable riding.

That’s the case for Sonya Ewan, a freelance writer in Albuquerque. At 4-foot-9, finding the right bike has always been a challenge for Ewan. Even extra-small adult bikes, Ewan said, were too large. And children’s bicycles weren’t sturdy enough for the rough riding Ewan does in the Sandia Mountains.

Ewan said she bought an O’Leary frame after she injured herself riding on a bike that was too large for her. She met with O’Leary, who measured her in person. Her O’Leary frame fits her perfectly, she said, which allows her to pull off tricky maneuvers such as tight turns. She said it did take a while for O’Leary to construct the bike but, “If you want it to be the perfect bike, it’s worth the wait.”

O’Leary’s digital storefront is responsible for some of his sales. Most of his business is local, but he has sold frames across the nation. It’s a challenge, he said, because custom frames require individual measurements. When a customer lives nearby, O’Leary can measure them in person using a specialized frame bike. When they’re online, he has to rely on their measurements.

O’Leary also tries to get his bikes into the public eye. He recently put up an O’Leary frame as a raffle prize at the La Tierra Torture Mountain Bike Race.

Like many working artists, O’Leary said he hopes to transition his evening and weekend work into a full-time gig, but that might take a while. His day job is partially bankrolling the frame-construction business. He’s also aware that any growth means he’ll have to leave the garage for a larger space. And he’s not quite ready to leave home yet.