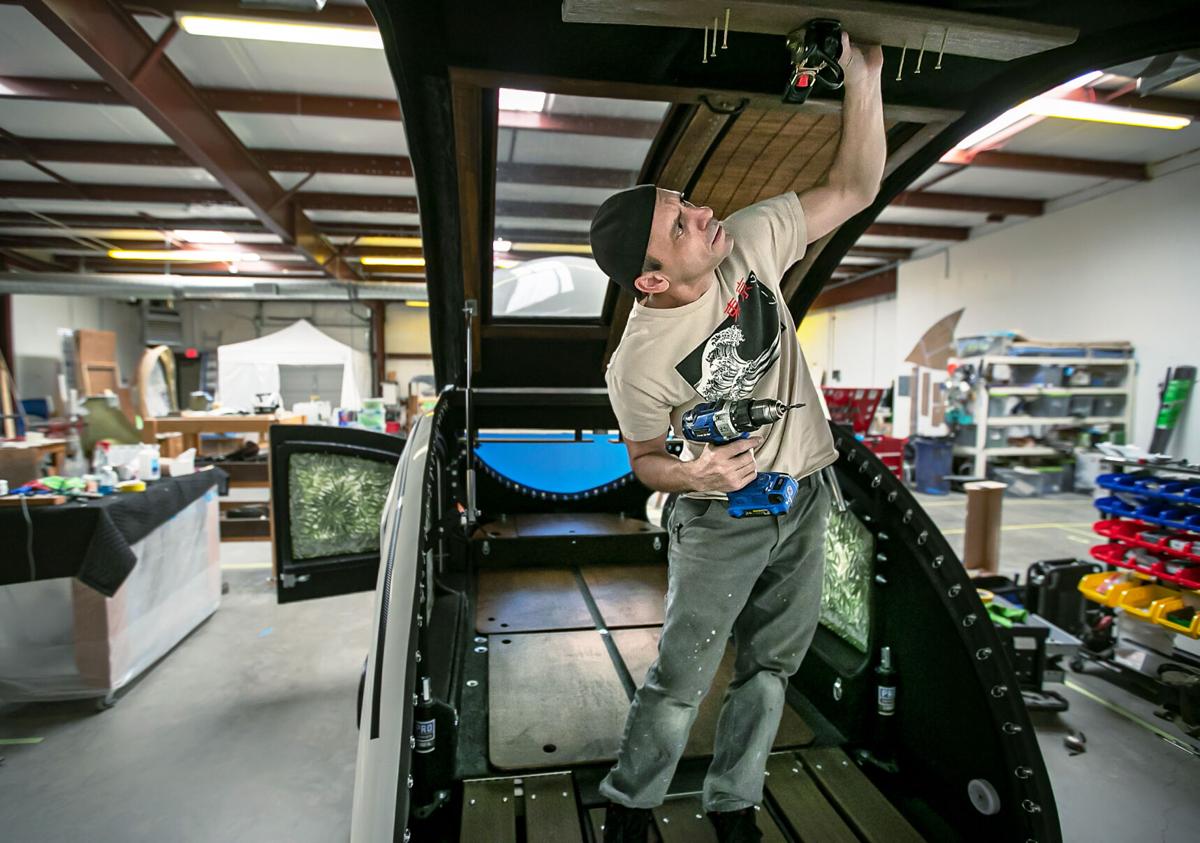 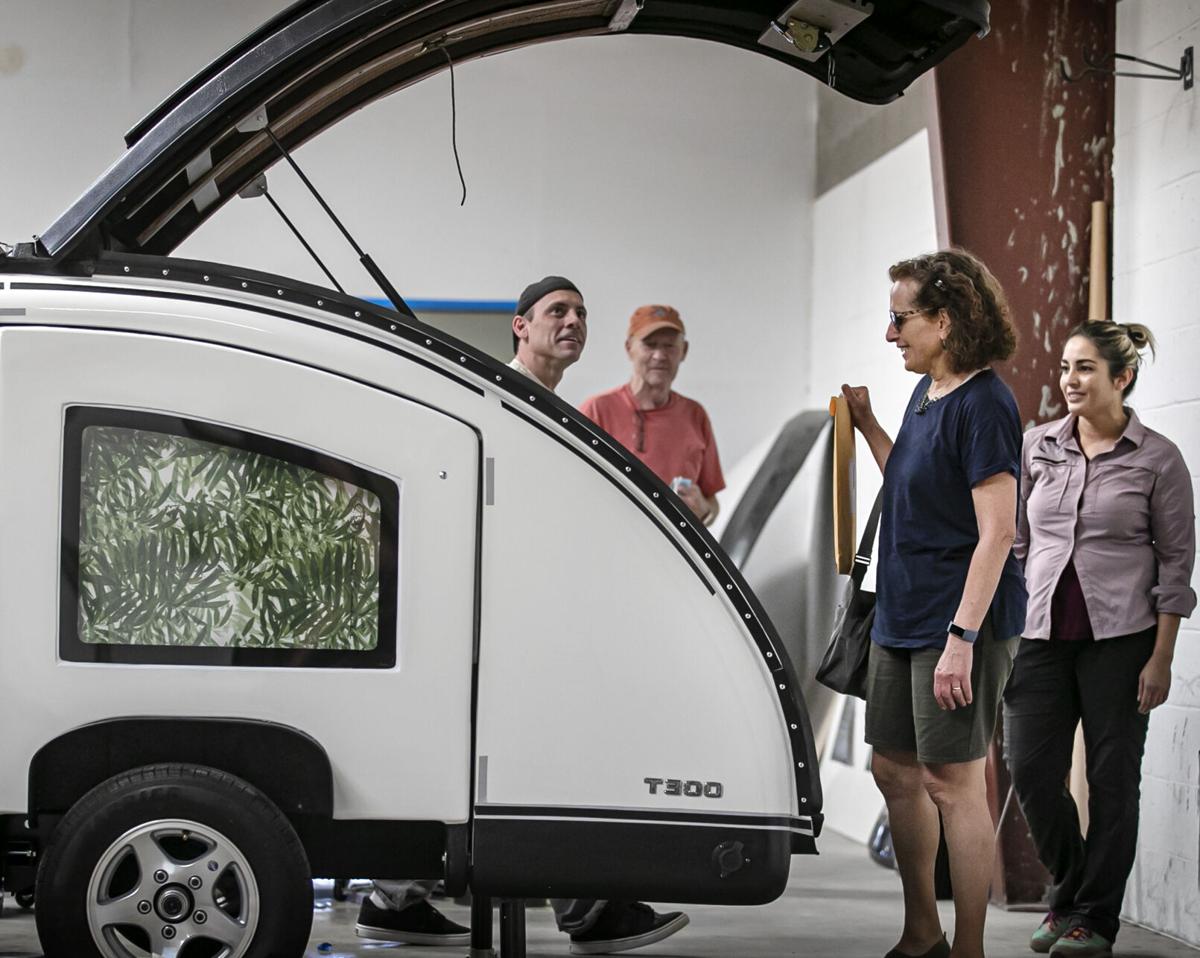 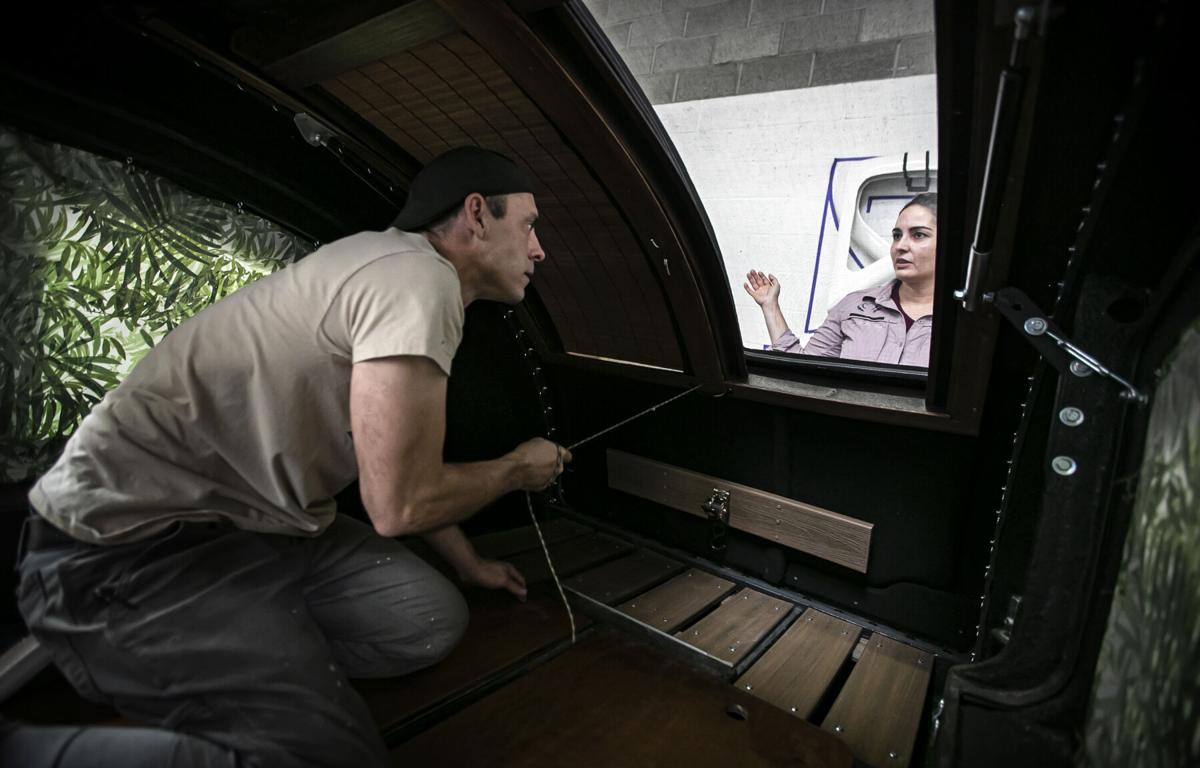 Angel Irlanda, left, and Laura Esteves De Irlanda with Earth Traveler Teardrop Trailers put finishing touches on a trailer for a client last week. Billed as the lightest RV trailer on earth, the T250 is light enough that a Fiat can pull it.

Angel Irlanda, left, and Laura Esteves De Irlanda with Earth Traveler Teardrop Trailers put finishing touches on a trailer for a client last week. Billed as the lightest RV trailer on earth, the T250 is light enough that a Fiat can pull it.

Angel Irlanda‘s airplane designer friend in Florida had boxes of them. Chicken feathers didn’t work out for cutting-edge aircraft design.

Did Irlanda want them?

Irlanda is an artist and sculptor. He was working as a painter on New Mexico movie sets.

He was also tent camping with his wife, Laura Esteves De Irlanda, and kids. The wind was incessant. No more tent camping. Time for a trailer, he reasoned.

Only problem? He had just bought a Fiat 500, not exactly a car designed to pull trailers. He found nothing on the market light enough, with even average teardrop trailers weighing about 1,500 pounds.

“It’s outside,” Irlanda said of his Fiat, parked by their 5,000-square-foot manufacturing space on Richards Lane they moved to in early August for their business, Earth Traveler Teardrop Trailers.

He would design and build his own lightweight trailer, weighing just 250 pounds (minus hitch and axle) for the carbon fiber-Kevlar-Corecell T250 edition or 300 pounds for the T300 version with the use of resin-reinforced chicken feathers, fiberglass, wood and smaller amounts of Kevlar and carbon fiber.

“We are democratizing the teardrop experience,” Esteves De Irlanda said. “The challenge was how lightweight can you be.”

“I designed it for myself,” Irlanda said of solving his camping challenges. “Friends told me other people have the same problem. Most customers are people who want to operate from a tent and upgrade or downgrade from an RV.”

Joshua Elwell, who lives in Kentucky, bought an early product from Earth Traveler Teardrop Trailers because he sought the most energy-efficient way to pull a trailer.

“I wanted a small trailer because I have a Tesla,” Elwell said. “I don’t want to tow a lot. [The trailer] is pretty aerodynamic. I’ve used it stopping in rest areas and actually at a campsite. It’s worked great.”

Even with so few trailers sold and Irlanda doing most of the work with assistance from three part-time employees, Earth Traveler already has been written up in Forbes and Men’s Health magazines. Investors have been sniffing, and RV dealers around the world want to include Earth Traveler trailers in their lineup, Esteves De Irlanda said.

“I have requests from the U.K., Australia and Germany,” Esteves De Irlanda said. “We’re still trying to build the company.”

The New Mexico Economic Development Department is buying into Earth Traveler, awarding the company $25,840 from its Job Training Incentive Program to hire six trainees at an average hourly salary of $17.25.

Right now, Irlanda uses traditional hand lay-up on fiberglass molds, but in the near future, he wants to add an epoxy infusion vacuum system as well as a 3D printer to make the trailer shell.

Both the chicken feather and carbon fiber trailers have the same dimensions. In travel mode, they are 11 feet long, rise up to 5 feet at the apex and measure 5 feet wide. They sleep two people inside the 8-foot-long sleeping area.

In most models, the side walls flip open to horizontal to create two more 7-foot sleeping areas that can be enclosed with a tent fabric. The front and rear roof sections rotate up from a center pivot, also with tent material, to enclose the vehicle. Fully expanded, the trailer measures 11 feet long, 11 feet wide and 7 feet high at the highest points in front and back.

Irlanda collaborated with material science and dynamic extremes scientists at Los Alamos National Laboratory to determine the variance of strength in chicken feathers. This was through the New Mexico Small Business Assistance Program and the New Mexico Manufacturing Extension Partnership.

“I like to design stuff,” he said. “I’m an addict of design. I went to college to study architecture. I like industrial design.”

Irlanda builds to order. An order so far takes 16 to 18 months to fulfill. He has completed six of 20 orders, five at home and one since moving to Richards Lane. He expects to build two or three trailers per month once the new employees are trained and the new equipment arrives.

“It was a dead silence for a month,” Irlanda recalled.

But it didn’t take long for the public to realize the safest place to be was outside.

“People started figuring out camping is the only way to go,” Esteves De Irlanda said.

Eldorado residents Michael and Ellen Chandler are Earth Traveler’s first New Mexico customers. They were looking for a used traditional teardrop trailer a year ago, and Earth Traveler popped up on Google.

The Chandlers took delivery of their chicken feather teardrop last week and headed out to a Santa Barbara River campground. A month ago, they got an Earth Traveler loaner and took it out to the field.

“It was pouring, and we were totally dry in the trailer,” Ellen Chandler said. “It was cozy. We wanted something we could pull really easy. We didn’t want a kitchen or bathroom.”

These are fantastic and a great idea and product for today's world.