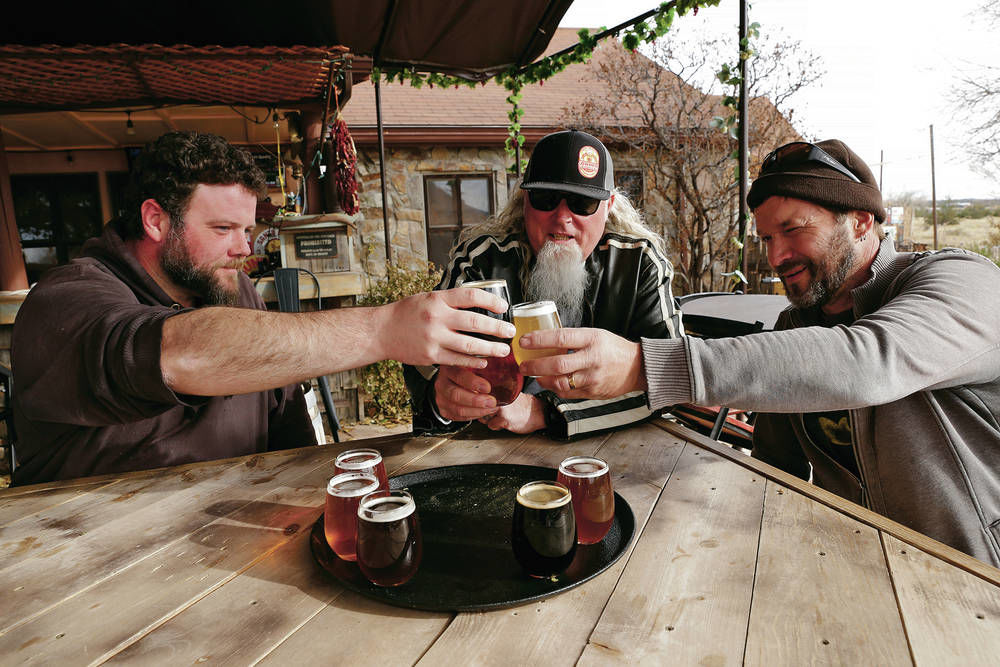 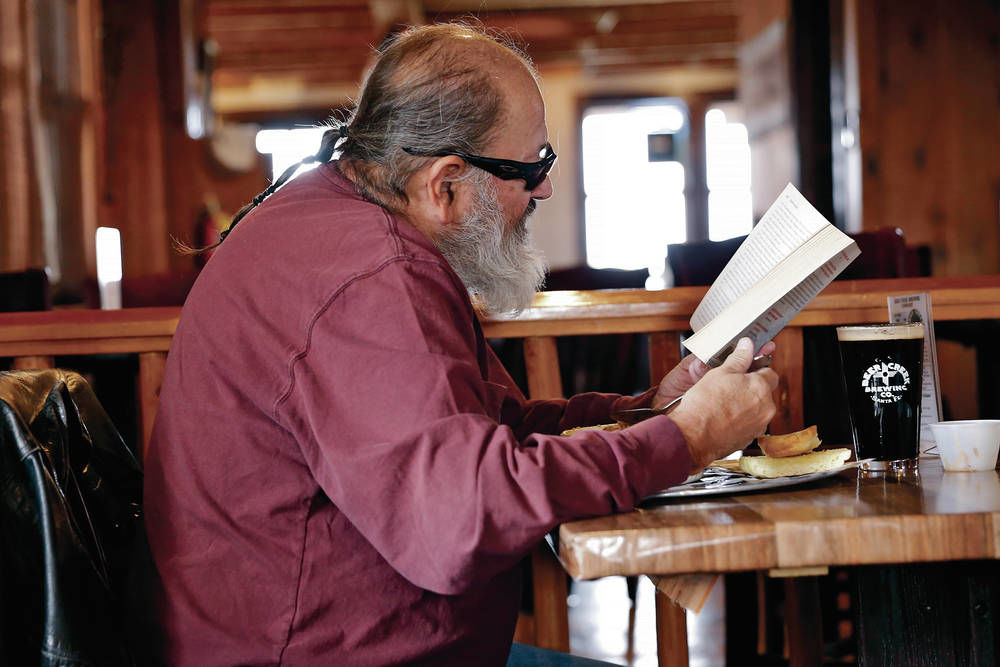 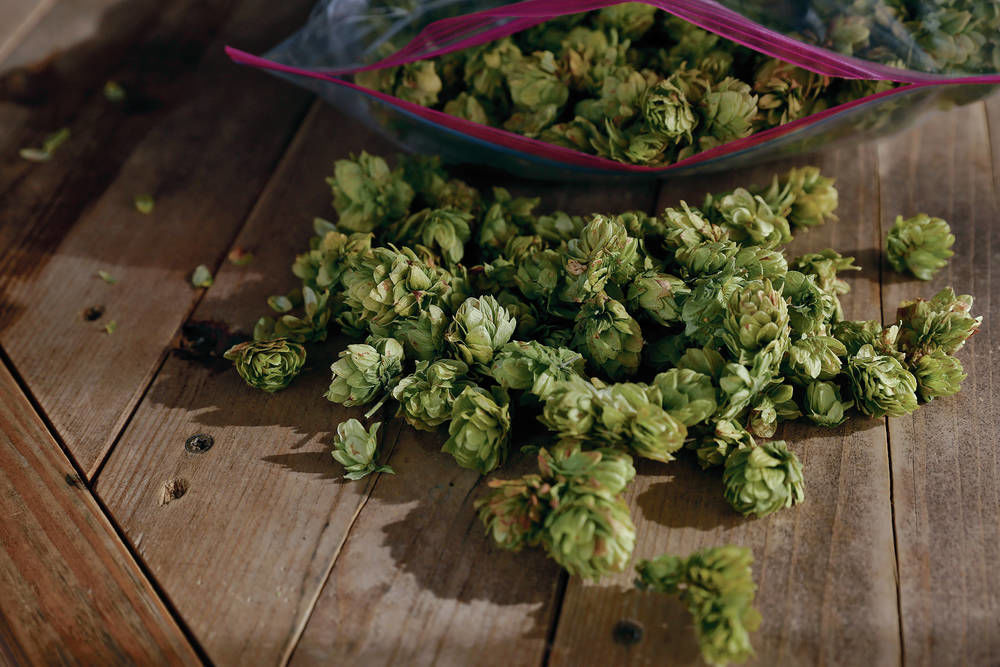 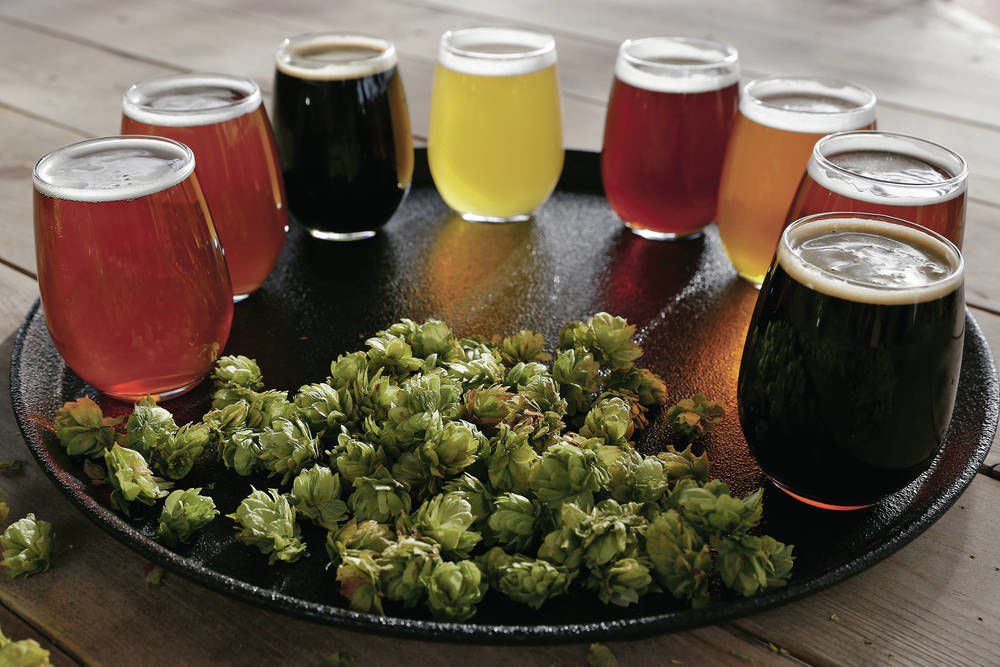 They started a tiny hops farm seven years ago with 100 plants along Galisteo Creek off the Turquoise Trail.

From that humble beginning, Crossed Sabers Hops Co. now grows 4 acres of the flower, and its crop has resulted in an enterprise called Beer Creek Brewing, which creates craft beers on site at a restaurant with the same name.

Rich Headley and Matt Oler, who operate the hops farm and are owners of Beer Creek Brewing along with Kelly McGuire and Ryan McArdle, say they are in year two of what will be a five-year plan to produce beer, in part, with their own hops crop.

“None of us could do this on our own,” Headley said.

Oler is CEO at Beer Creek and oversees the brewery; Headley is the chief operating officer and is known to serve tables. McArdle is the chief financial officer and McGuire manages the front of house, located on N.M. 14 just south of Bonanza Creek Road in the San Marcos District.

Their master plan calls for expansion beyond the Turquoise Trail.

“Our next step is to create a tap room in Santa Fe,” Headley said. “As soon as that tap room is open and creating revenue, we want to get a tap room in Albuquerque.”

The five-year plan calls for both facilities to be in place in 2020.

Beer Creek’s 2-month old brewery is a five-barrel brewhouse with 10- and 20-barrel fermenters able to produce 600 barrels per year, though Oler thinks they will produce only 400 barrels the first year.

That volume is considered at the upper end of the middle group of New Mexico brewers.

In three years, Headley said he wants to have a 20- to 30-barrel brewhouse in Santa Fe.

They first wanted to establish the hops farm, then the restaurant, then the brewery. They proceeded methodically from the day the planted their first hops plant in 2012. Back then, a brewery and restaurants were not even on the horizon.

The spark came in 2016 when Oler and Headley invited a half-dozen brewers to their hops fields and served them some home brew they had made.

“Rod Tweet at Second Street Brewery said, ‘You need to open a brewery, Rich. Your beers are phenomenal,’” Headley recalled

They didn’t just hire anybody to start the restaurant and brewery. Heather Maxwell, the head baker and chef, came from Dr. Field Goods Kitchen. Head brewer Jami Nordby previously was the founding brewer for Rowley Farmhouse Ales, which in October was named the Small Brewpub and Small Brewpub Brewer of the Year at the Great American Beer Festival in Denver, the largest U.S. ticketed beer festival. Nordby also owns Santa Fe Homebrew Supply and for a long time worked at Upper Crust Pizza, which led to the restaurant highlighting Beer Creek Brewing’s menu.

The first off-site tap serving Beer Creek porter is The Hollar in Madrid, which took delivery of its first keg Nov. 9. The Hollar is ordering a sixth barrel keg of porter once a week, said manager Jim Payne.

“We know most of the guys from Beer Creek,” Payne said. “They had their planning sessions on our patio. We like to promote local beers.”

The New Mexico Brewers Guild – the statewide organization that promotes and protects the craft brewing industry — had 19 brewer members in 2011. The count now is 81, a four-fold increase. Nationally, the craft brewery count multiplied five-fold from 2011 to 2018, according to the national Brewers Association.

Breweries are no different than wineries and farmers markets — both also multiplying exponentially since the 1990s — along with the organic and farm-to-table restaurant movements: People want to know where their food and drink comes from, plus meet the producers, said Leah Black, executive director of the New Mexico Brewers Guild.

“(Customers) meet the brewer,” Black said. “They become loyal to the brand. People more and more want to know the craft behind the beer.”

Craft brewing often is an escape for the entrepreneur.

“People have tough jobs,” Black said. “They want to leave the rat race. Brewers are risk-takers. It gets contagious. A lot start with home brewing.”

Headley, McArdle and Oler fit that model. Headley and McArdle started home brewing in 20o9. Headley was founder and owner of Amenergy, a sustainable construction company, and a couple other companies, which he all sold to dedicate himself to Beer Creek. “I was at a point in my life to not focus on so many projects,” Headley said.

“I felt that this project had a lot more potential based on the fact I’m working with my best friends. My team can accomplish great things.”

I live 3 minutes drive from beer Creek I have been there several times.... Great place good beer good food and the patio and summertime is fantastic.