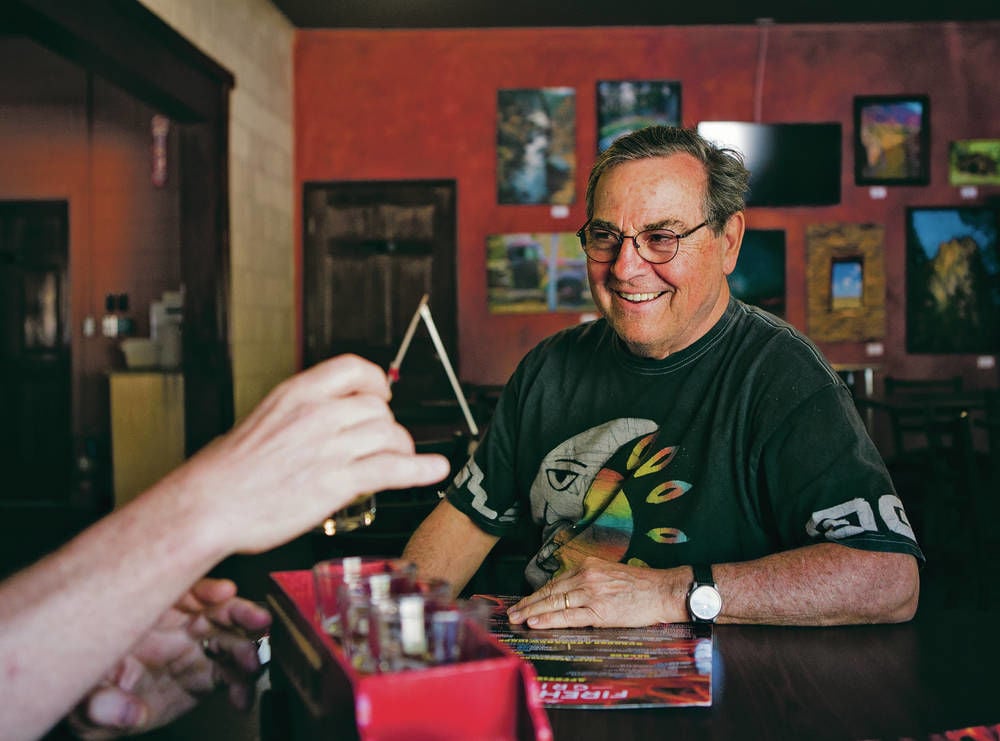 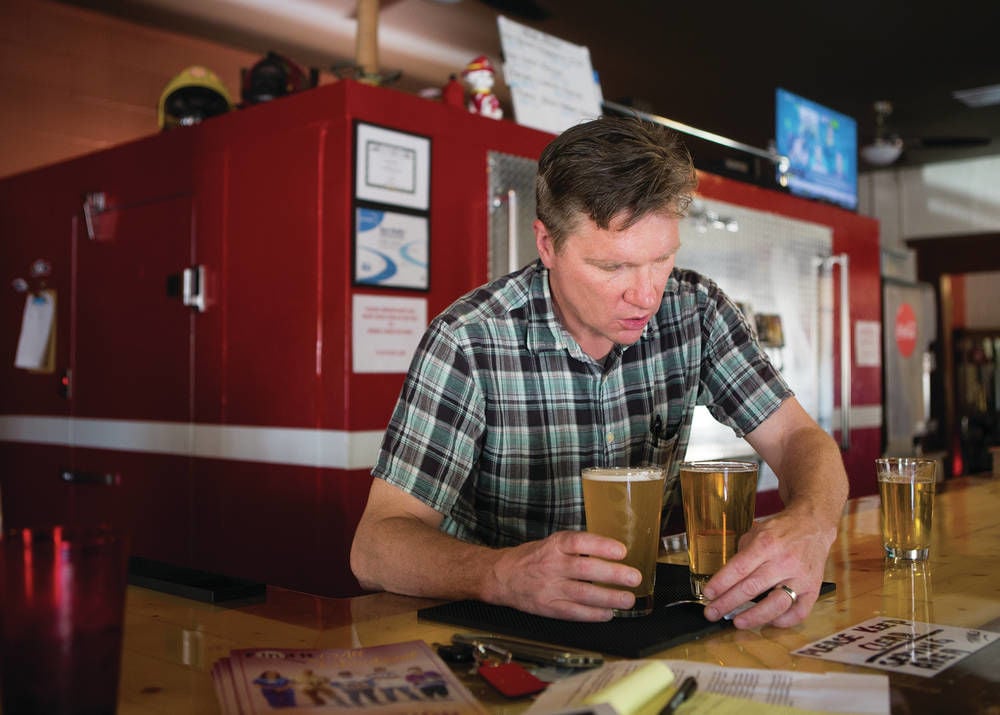 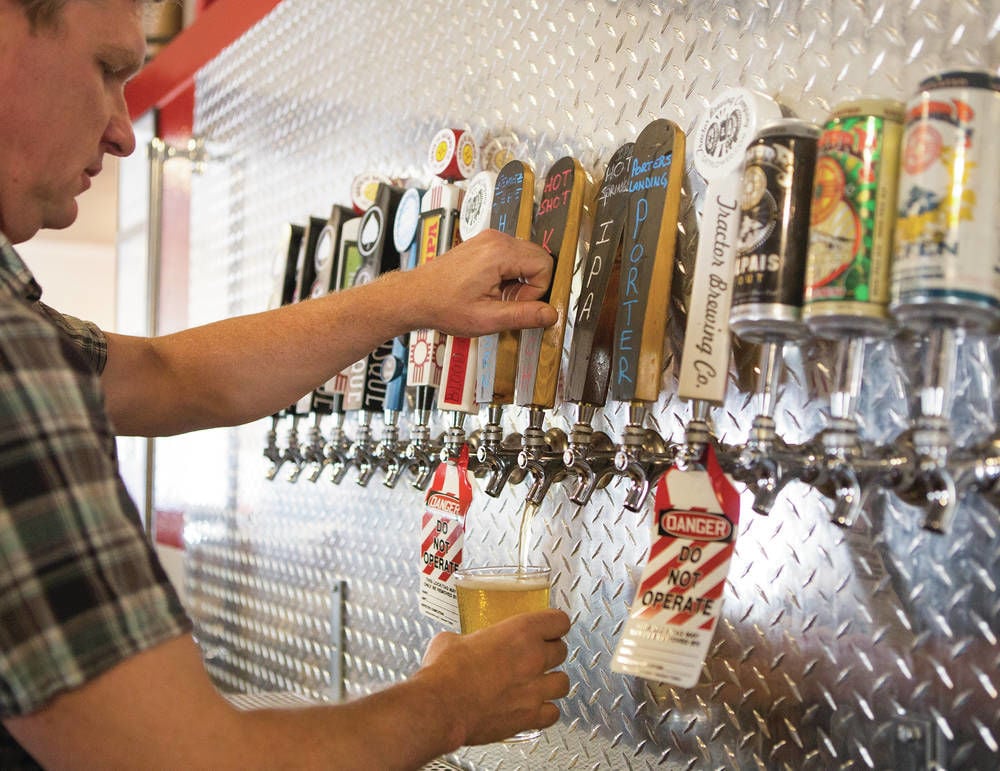 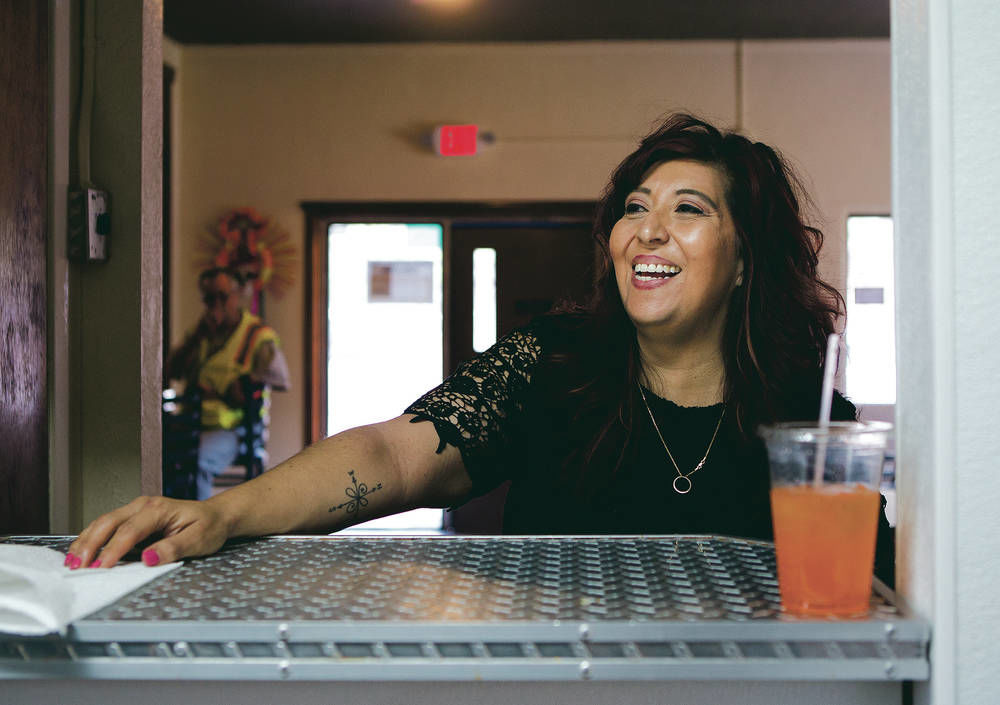 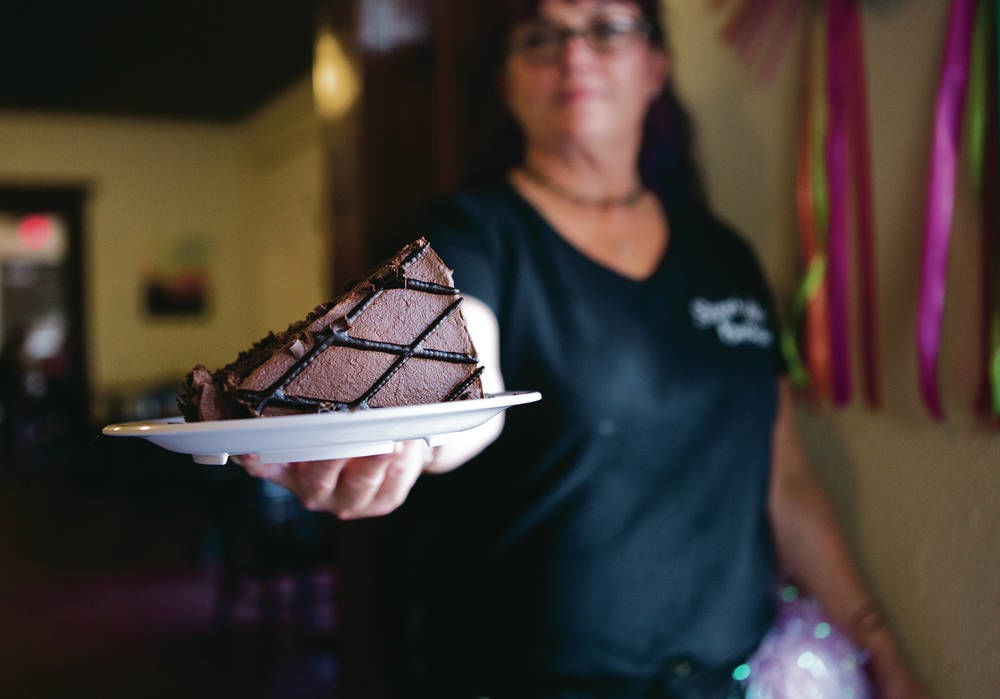 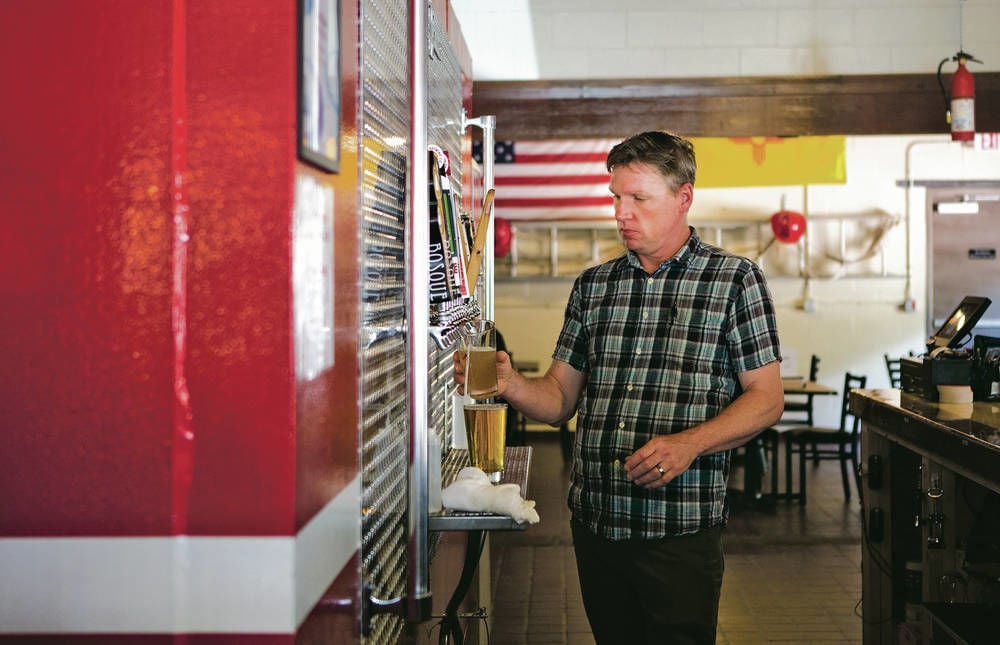 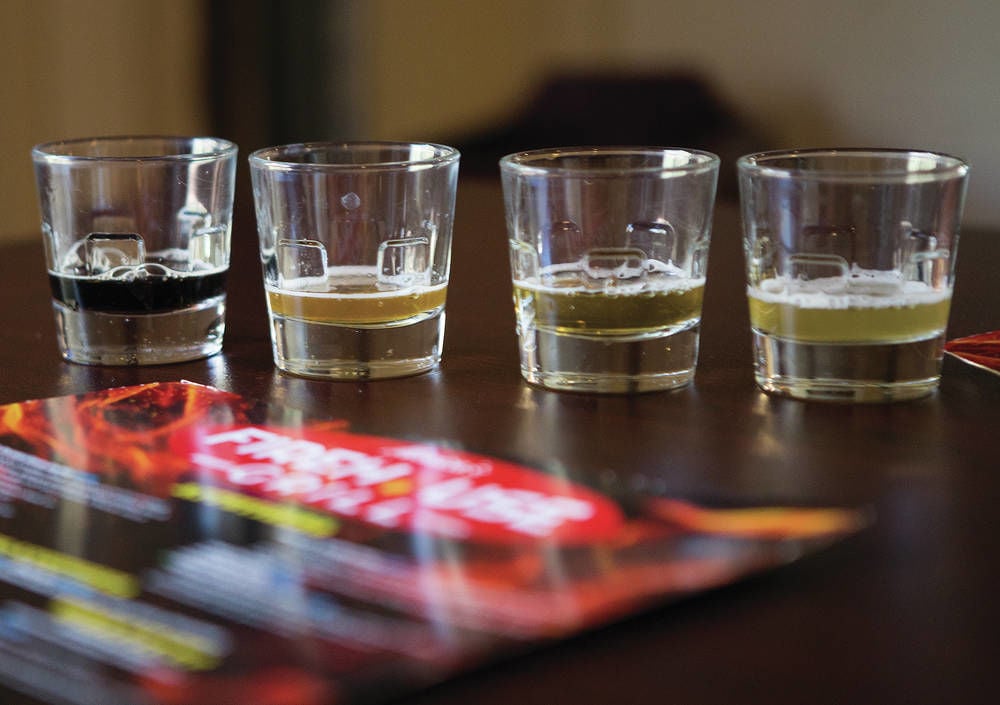 Second Alarm Brewhouse has created four of its own beers on tap thus far, including an IPA, porter, Hefeweizen and a Kolsch. Eventually, staff said they'd like to feature 9 to 10 Second Alarm brews on tap. Olivia Harlow/The New Mexican

Second Alarm Brewhouse has created four of its own beers on tap thus far, including an IPA, porter, Hefeweizen and a Kolsch. Eventually, staff said they'd like to feature 9 to 10 Second Alarm brews on tap. Olivia Harlow/The New Mexican

The fire theme is wall-to-wall at the two businesses, which operate collaboratively under one roof, giving new life to the former Jemez Springs Fire Department Station No. 2. With family ties to volunteer firefighters who served the Jemez Springs village for decades, the owners of Monica’s Firehouse Grill and the Second Alarm Brewhouse say they’ve come together to serve locals and tourists while honoring the building’s roots.

“There’s so much history here,” said grill owner Monica Sandoval Tolleson, whose father, Gilbert Sandoval, served at the fire station for more than 20 years. The restaurant and bar, Tolleson said, “is a tribute to all those [fire] volunteers who serve, and to the village of Jemez Springs.”

Atop the former fire station’s roof is a still-operable siren. Inside the doors are the orginal tile floors from the building’s construction in the mid-’60s, with tape still marking where firetrucks once parked. And above one dining room is the same metal garage door that was pulled up make way for trucks. (Lewis, the finance manager of both businesses, said he plans to one day utilize the door and install an outdoor patio.)

While the facility has changed drastically over the years, Sandoval, 83, said in many ways, it feels the same as it did when he first began serving as an EMT in 1972.

“To see a building you used for so many years in public service. … It’s a really good feeling to see the building used again as something useful that serves the community in one way or another,” he said.

After a new fire station was built in the late ’90s, Sandoval said, there was about a five-year stint when the building was vacant. Then, he said, it was leased by the American Legion before becoming empty again. “It was really in disrepair,” he said, until Tolleson and the Lewis boys stepped in.

Cody Lewis, whose father, Wayne Lewis, served as the department’s fire chief for most of the ’90s, and whose grandfather, Ward Lewis, helped found the department in the ’60s, said he couldn’t stand to see a place where he’d spent most of his childhood abandoned.

“It was kind of a part of the family,” he said, adding his uncle, Jess Lewis, one of the co-owners, also served as a youth volunteer for the department and later served as deputy fire marshal in Sandoval County. “[This place] is kind of an icon to locals here.”

For a town with only three other restaurants, the 2-for-1 business model “was really needed,” Tolleson said, adding the closest brewery to town is at least a 40-minute drive.

At the restaurant and brew pub, customers can order food items such as the Redondo Burger, an open-faced cheeseburger nestled in a mound of crispy french fries, as well as made-from-scratch carnitas that Tolleson said are so popular the restaurant requires about 40 pounds of pork each week. The menu also features a “taco dog” — a deep-fried beef hot dog stuffed with green chile and wrapped with a corn tortilla — and a red chile recipe passed down to Tolleson from her mother.

“It’s all fresh, not canned, not in jars,” Cody Lewis said.

On the brewery side, Rio Rancho-based Dan Garcia, a friend of the Lewis family, said he uses skills he has learned as a home brewer for 12 years to create “the basics.” He said eventually he wants to have nine to 10 beers on tap but right now is focusing on consistency. Thus far, Second Alarm beers include the Hot Shot Kolsch, Jemez Jefe, Hot Springs Hoppiness and Porter’s Landing Porter, as well as a plethora of other New Mexico favorites on tap. The next Second Alarm beer, Garcia said, will be an amber and likely will launch in June.

On a recent Thursday in Jemez Springs, cars and motorcycles swarm around the restaurant and taproom. Families gather in one of the dining rooms, where a firefighter suit hangs in a corner and helmets are strung from a ladder against the building’s firetruck-red walls. Meanwhile, a group of locals line the bar, sampling beer flights and cracking jokes. It’s only 3 p.m., and the place is packed.

This quick success, all the business owners agreed, stems from a unique relationship, unlike most business partnerships.

“It’s like family,” Tolleson said. “The kids from generations [of volunteer firefighters] are still working together and doing good things for the community. … I’m just very proud of that.”

What: Monica’s Firehouse Grill serves New Mexican classics with a bar-food twist, while Second Alarm Brewhouse pours diverse beers, including four of its own craft brews.

When: The brewery and restaurant are open from 11 a.m. to 8 p.m. Tuesday through Sunday. Eventually, owners say they might expand hours on Fridays and Saturdays and may open Mondays during the summer.