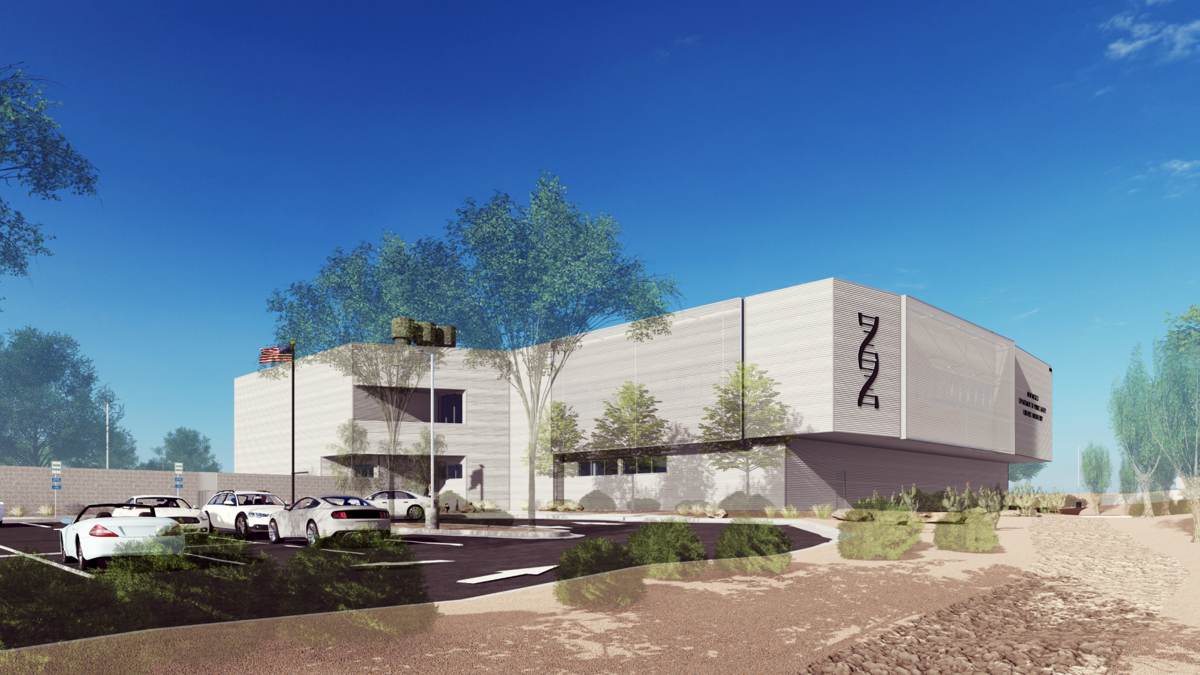 A rendering of the new forensics lab under construction at the south end of Galisteo Street for the New Mexico Department of Public Safety. 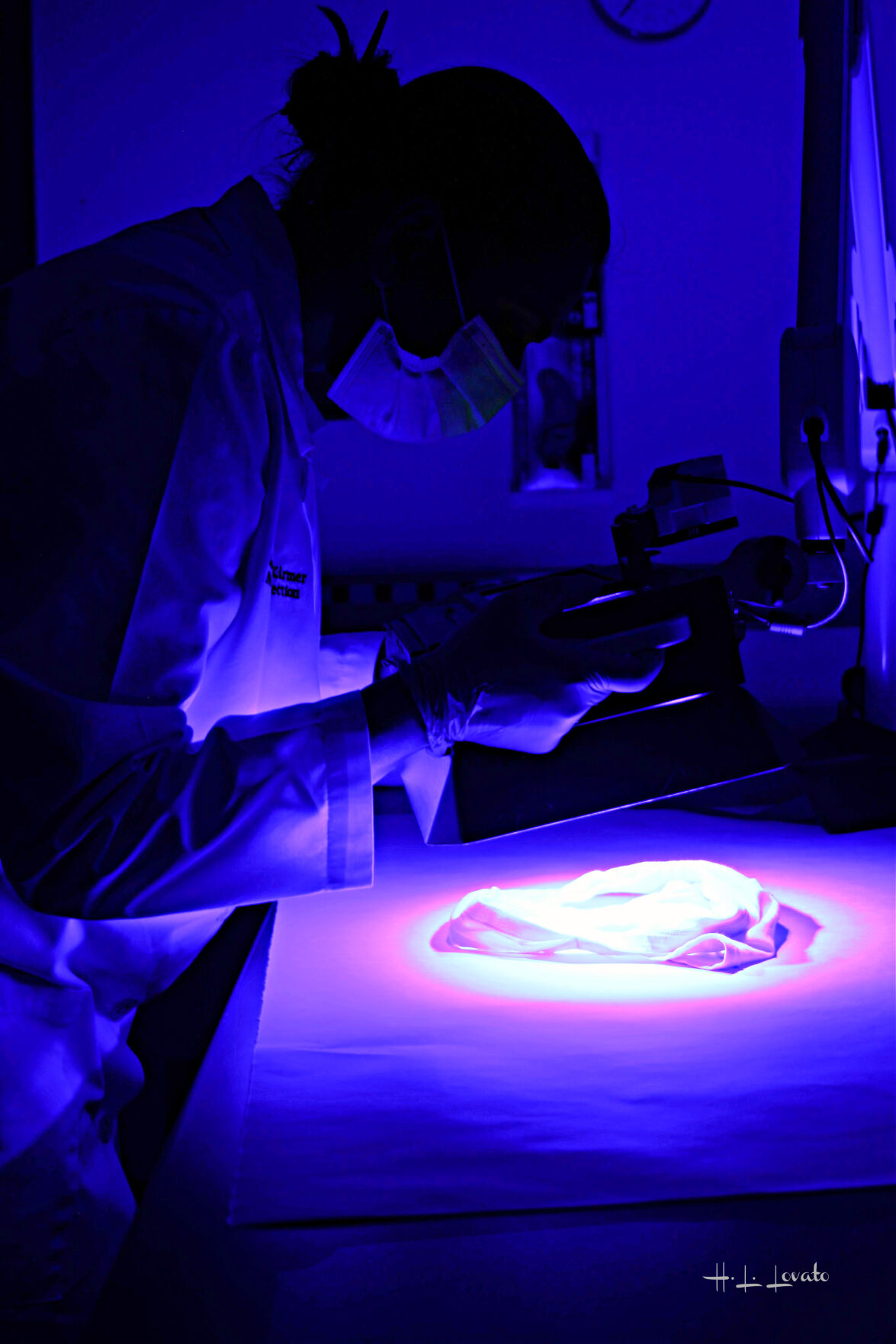 Forensic scientist Raman Sankhu-Kirmer demonstrates how DNA can be viewed with an alternate light source on clothing. 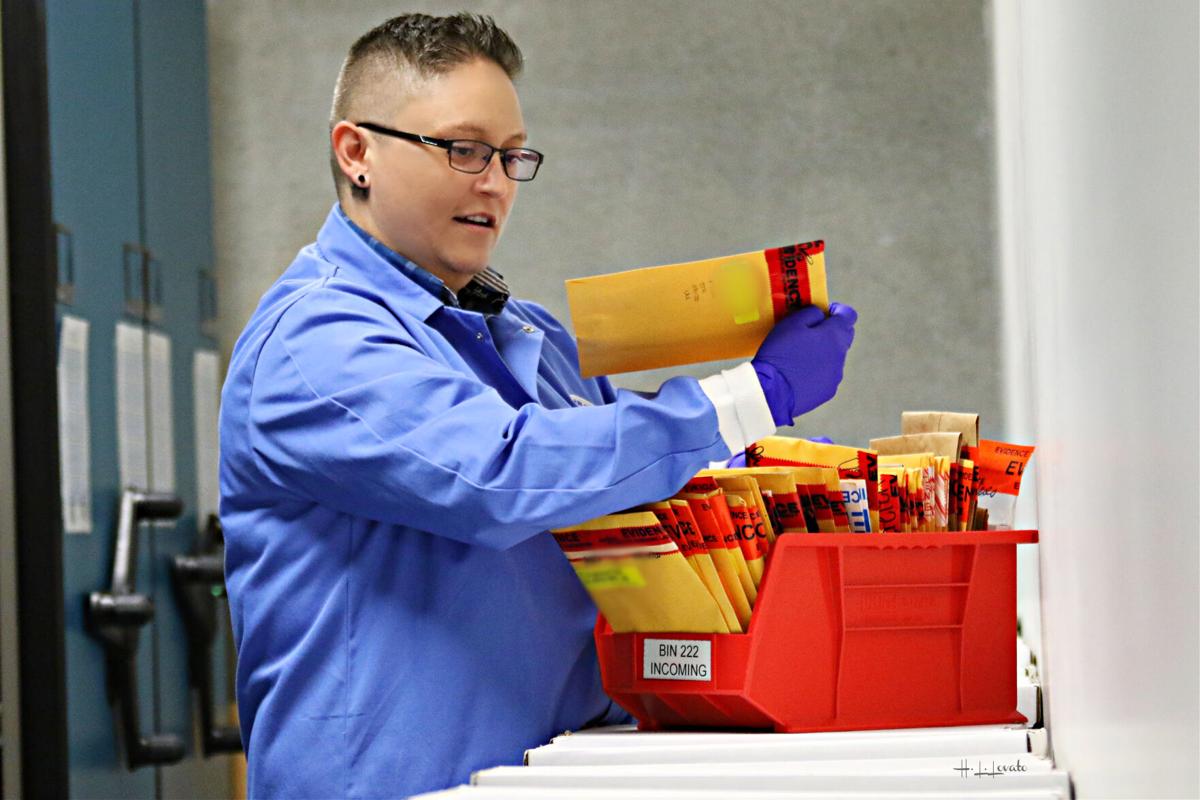 A rendering of the new forensics lab under construction at the south end of Galisteo Street for the New Mexico Department of Public Safety.

Forensic scientist Raman Sankhu-Kirmer demonstrates how DNA can be viewed with an alternate light source on clothing.

The 44,000-square-foot hulk at the southern dead end of Galisteo Road will be the new forensic laboratory for the New Mexico Department of Public Safety.

That’s where DPS will handle and analyze evidence for more than 300 New Mexico law enforcement agencies in the four fields of DNA/biology, firearms, latent prints and controlled substances.

The move, expected in about a year, will be a quantum leap for the department.

The forensic lab now operates out of a 43-year-old, 10,000-square-foot space that is woefully too small, laboratory Director Katharina Babcock said.

“I’ve been here over 20 years,” said Babcock, whose specialty is firearms. “I’ve always looked forward to this but never thought it would happen.”

Construction on the $24.3 million building started in February and should be completed by the end of the year. It took years to assemble the funding, but the time had come for the forensics lab to move somewhere better than its 1979 quarters.

“We started planning this more than five years ago; it could be almost 10 years,” said Anna Silva, director of the Facilities Management Division at the New Mexico Department of General Services, which is responsible for the state’s buildings. “With any old building, there comes a time where it’s more costly to maintain the building than build a new, state-of-the-art building.”

The new two-story, 35-foot-tall forensic lab will be the largest state building constructed in New Mexico since the 84,205-square-foot annex to the New Mexico State Veterans’ Home in 2017 and the 196,769-square-foot scientific laboratory in Albuquerque in 2010, Silva said.

The facility will be among the most energy-efficient state buildings, with an expected 60 percent decrease in water use, Silva said.

“What we have right now is a lab that is very compact,” Babcock said. “We are operating in very close quarters. What this does is provide space and provide opportunity to retain forensic scientists and recruit scientists. Where we are lacking is infrastructure to house scientists and equipment.”

The lab will have a centralized evidence storage area with easy access for DNA/biology, latent prints, firearms and controlled substances/chemistry, and each discipline will have a designated area and office space. Each field also will have its own rooms to test evidence with alternative light sources, unlike the current setup, in which people must take turns doing ALS testing, Babcock said.

“It will be very nice not having to share space for ALS,” she said.

The new lab will have a large processing bay, an improvement over the current setup.

“It will allow us to process a lot of large items,” Babcock said. “Right now, we have to move things around. [The new lab] gives us an opportunity to work in a clean environment without moving things around.”

The Santa Fe forensic lab processed 21,817 pieces of evidence in 2021. DPS has two other forensic labs, in Las Cruces and Hobbs, but they only work with controlled substances.

The new lab will also have an onsite shooting range and shooting water tank.

There will be separate entrances for staff and law enforcement, and the new lab will have three private rooms instead of the current one room to receive evidence from law enforcement officers, which leads to officers sometimes having to wait, Babcock said.

DPS will move nearly all the existing forensics equipment to the new lab.

“We can house more equipment there and scientists to do the work,” Babcock said. “Our goal is to protect the integrity of the evidence.”

“This building will stand toe to toe with any forensic science building in the world,” said Ken Mohr, principal at Crime Lab Design.

Creature comforts will also be built into the lab: abundant daylight, elements of nature and adjustable air conditioning.

“In the science world, we are about 50 years behind,” said Jinhee Lee, crime lab designer at Crime Lab Design. “We have more women in the science world. Labs have always had the temperature at 65 degrees. We are making it adjustable temperature. We want to have a flexible work environment.”

Noise and vibration also will be mitigated.

“We want scientists to have an ability in a secure facility to relax,” said architect David Mishler, project manager at Dekker Perich Sabatini.

“We are treating it as if it is a home for them,” Lee said.