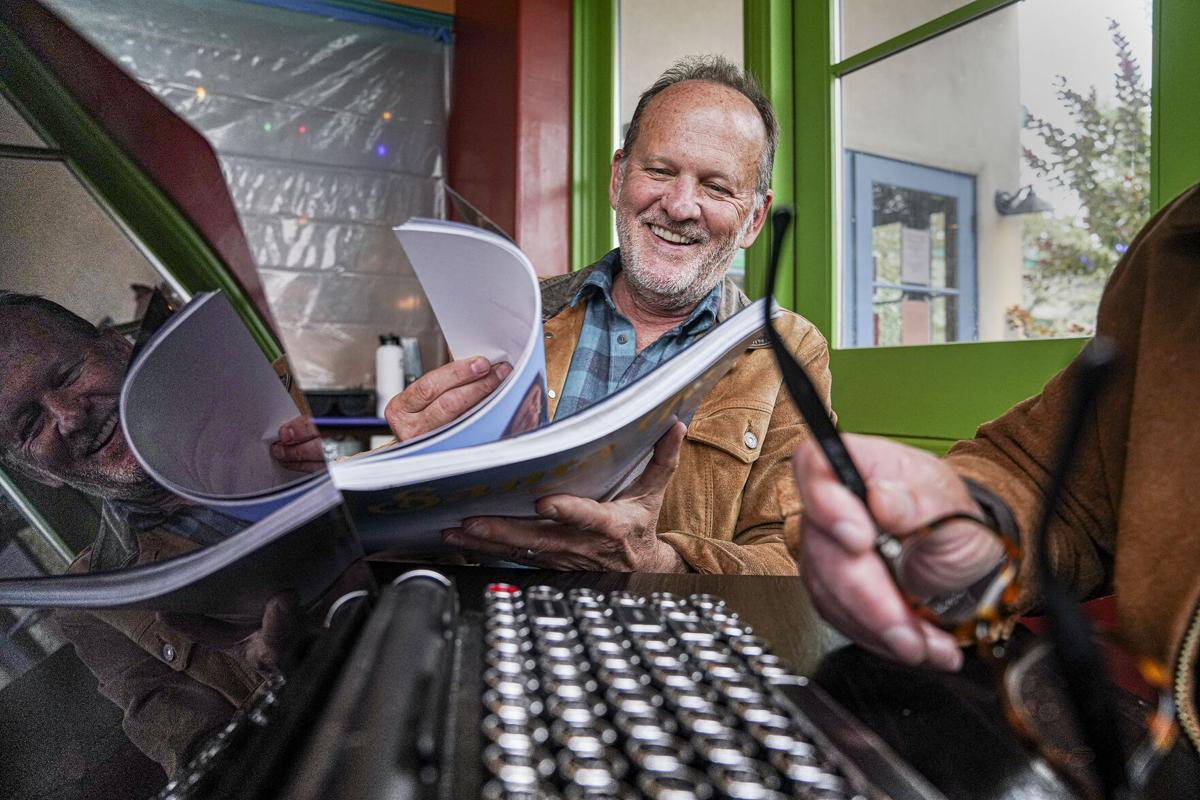 John Miller flips through the inaugural issue of Santa Fe while working with Owen Lipstein at Harry’s Roadhouse on Thursday afternoon. 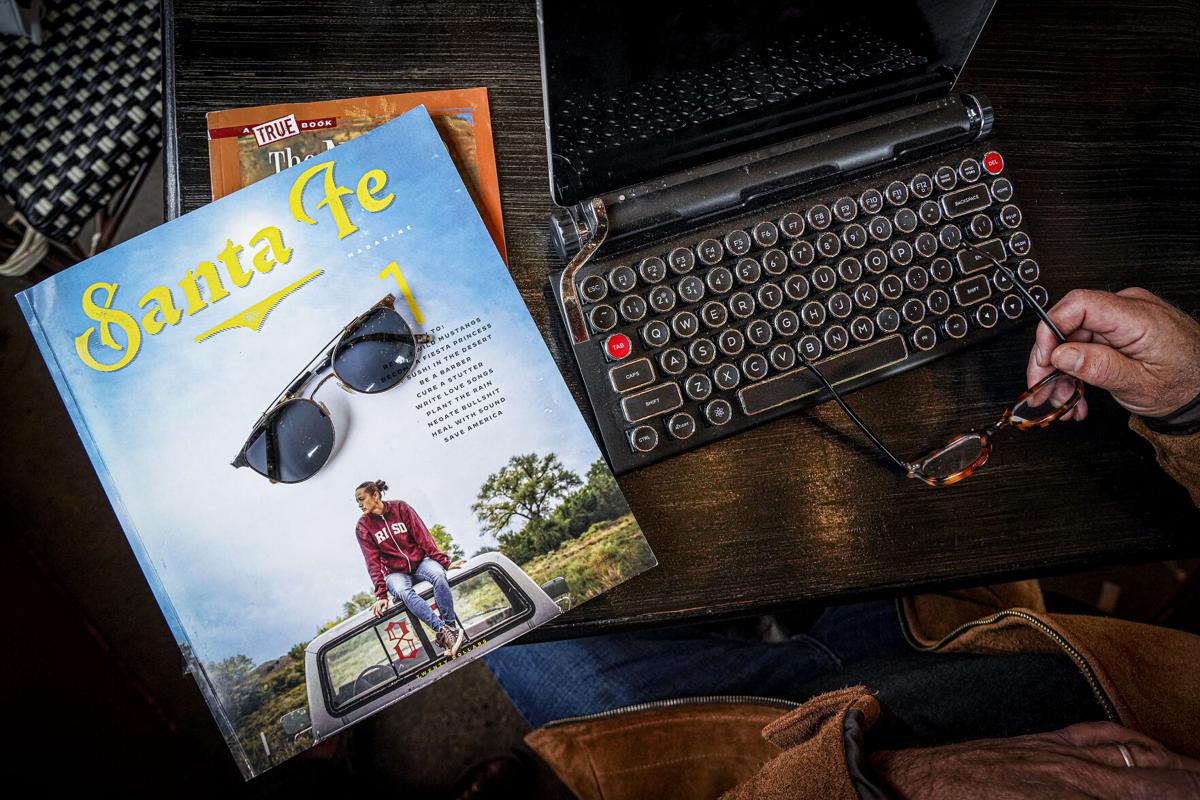 The first issue of Santa Fe lays next to publisher Owen Lipstein’s keyobard as he discusses the latest issue with co-publisher John Miller on Thursday at Harry’s Roadhouse. 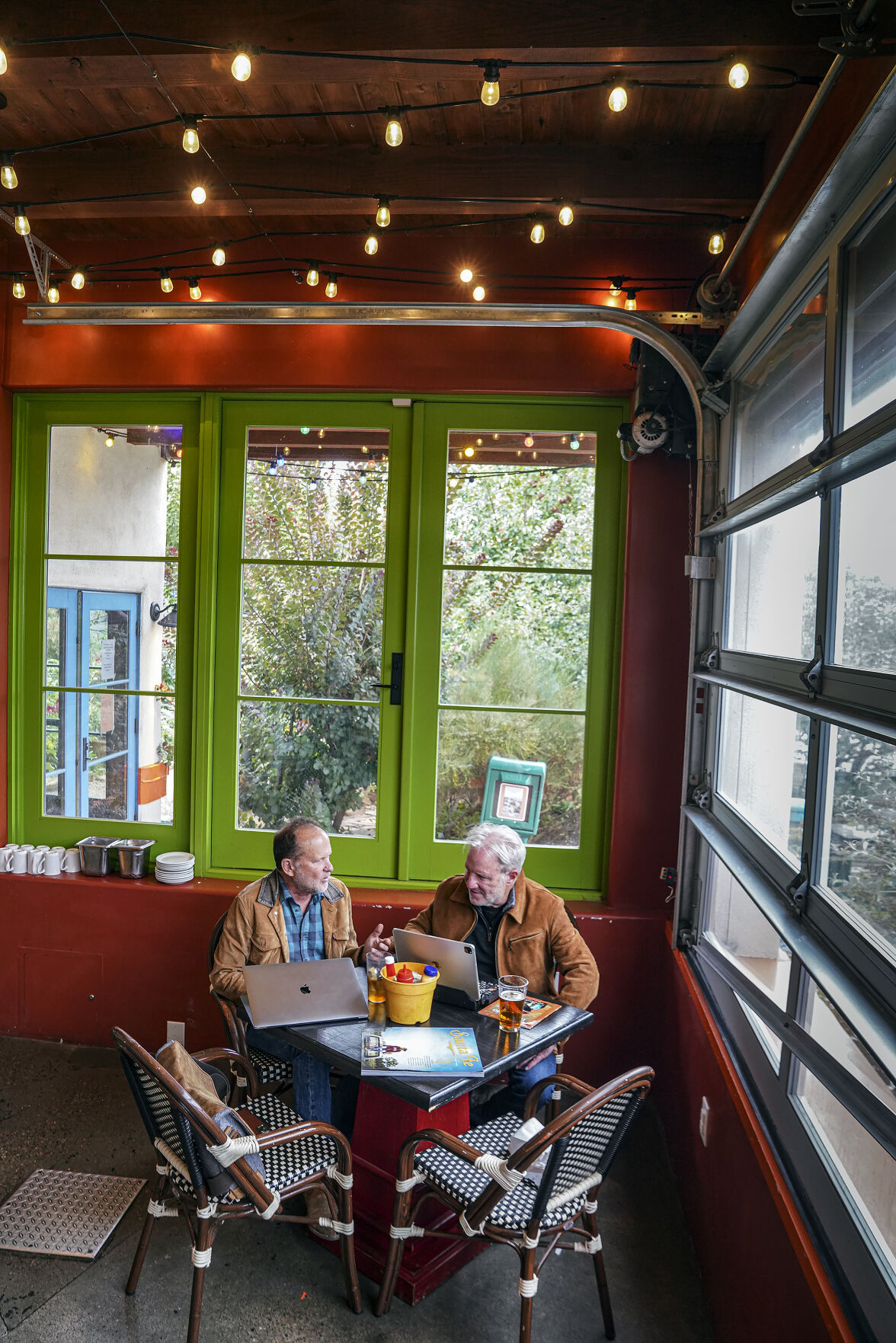 Publishers John Miller and Owen Lipstein have a different idea for their Santa Fe magazine, which debuts Friday.

Their idea is for their subjects to do most of the talking in Q&A formats or just stringing together answers without the questions. Black Bird Saloon owners Patrick and Kelly Torres in Cerrillos have a dialogue with no editorial interference. The magazine does not rely on traditional prose.

“It’s our editorial philosophy,” Miller said. “This is about them. It’s not about us.”

“People speak from themselves,” Lipstein added.

They spell out in the opening pages of the premiere issue “What we do” and “What we don’t do.”

Lipstein, a former publisher of Mother Earth News and Psychology Today, moved to Santa Fe a few years ago. Miller now lives in Galisteo after starting his career as art director at Esquire and Vanity Fair.

“We were really interested in the people here,” Miller said. “We’ve lived in a number of places, and we haven’t lived anywhere with so many interesting people.”

“It wasn’t just interesting people,” Lipstein said. “I found myself being dazzled and fascinated by the day in the life.”

Benedetti and New Mexico Actors Lab artistic director Nicholas Ballas were the first people interviewed, and they appear in tandem in a 12-page spread, the most pages for one interview.

Owen Lipstein is on the actors lab’s board of directors, and his wife, Maggie Fine, a Santa Fe magazine “roving editor” will be in its last play of the year, Benedetti said.

“The interview they did with Nico and I was the first one they did,” Benedetti said. “Nico and I have been working together for 40 years. In the course of that interview, we learned a lot about each other that we didn’t know.”

Lipstein and Miller seek to give readers such insights from each interview subject.

“We are less interested about their job than who they are and how they got there,” Lipstein said.

They collaborated with founding partners Prull Construction, Inspired Living Design, Santa Fe Institute and The Railyard, each with eight pages to tell their story in an advertising format.

The duo intentionally avoided Top 10 lists. They made Santa Fe a touch larger than most magazines.

“I don’t think that’s what people want,” Lipstein said about Top 10 lists. “That’s what they have been given, largely.”

“They get enough of that on Facebook,” Miller said. “Print can do big beautiful pictures you can’t do online.”

Santa Fe magazine does not even have a website with the articles.

Miller and Lipstein hope to bring each issue to life with a launch party, allowing people to meet as many interview subjects as show up. The first launch party is Oct. 22 at SITE Santa Fe, they said.

“It’s a celebration of the people we covered and interviewed,” Lipstein said. “The purpose is to create a community. The intention is to have people value the magazine.”

There will also be a “meet the editors” event at 5 p.m. Oct. 12 at Garcia Street Books, they said.

Santa Fe measures an oversized 12.5 by 10.5 inches and will be published four times a year. The cover price is $20. Miller and Epstein said Santa Fe will be distributed to the 60 advertisers for public sales as well as at retail stores, hotels and some Airbnb locations.

The magazine is also available by subscription for $115 per year, which includes postage for the 2-pound, 2-ounce publication. Subscriptions can be acquired online at SantaFeMagazine.co.

15 years ago I had a subscription to the original Santa Fean. It was filled with interesting interviews, photographs and stories from local historians. Then it became a marketing rag and subsequently failed as did its progeny. I miss that publication but I guess there were not enough people like me.

$20 an issue? Good luck, they're going to need it. Very few will buy, and the advertisers will back out because the ads are not being seen enough and generating traffic. How do they think they will succeed, where THE magazine, Santa Fean, and Trend and failed/struggled?

Brilliant -- looking forward to reading it!