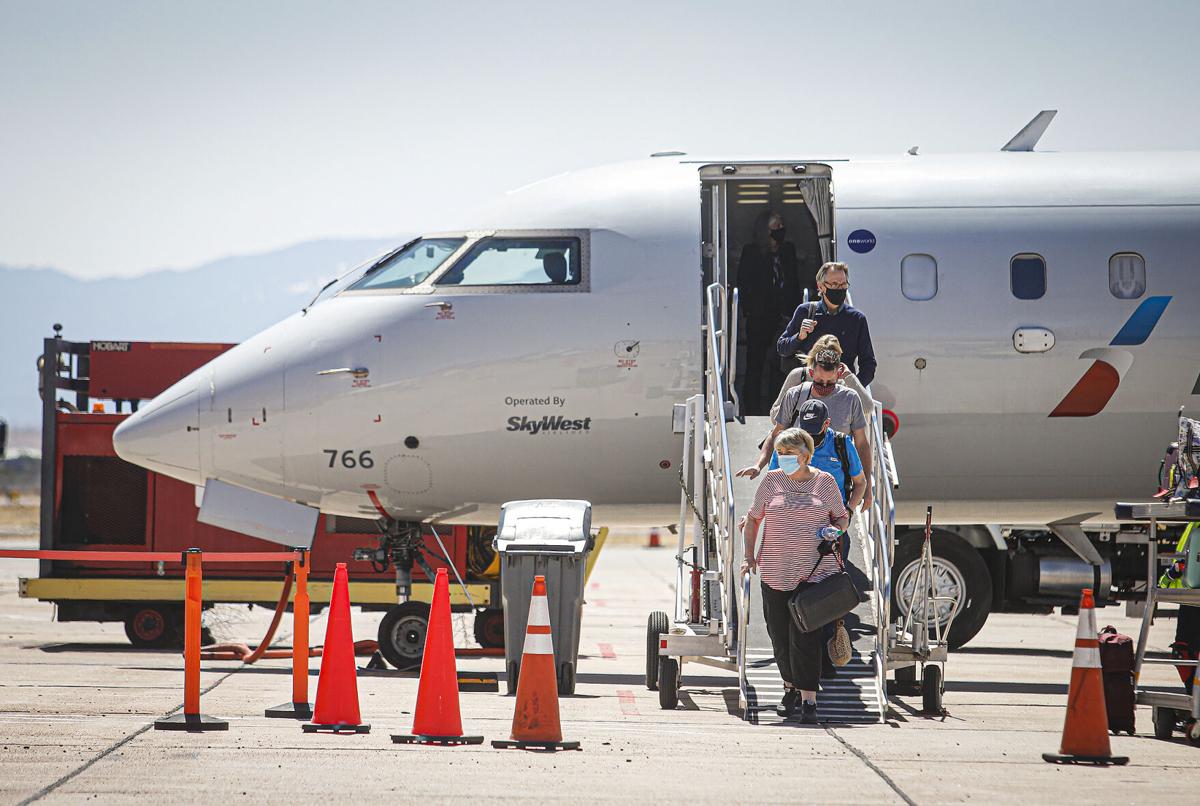 Passengers disembark Friday after arriving in Santa Fe from Dallas. Starting June 3, daily departures from Santa Fe to Dallas will increase from three to five. A nonstop flight to Phoenix also is set to return after being dropped due to lack of demand around the start of the pandemic.

Passengers board a flight headed to Dallas on Friday afternoon from Santa Fe Regional Airport.

Passengers disembark Friday after arriving in Santa Fe from Dallas. Starting June 3, daily departures from Santa Fe to Dallas will increase from three to five. A nonstop flight to Phoenix also is set to return after being dropped due to lack of demand around the start of the pandemic.

Passengers board a flight headed to Dallas on Friday afternoon from Santa Fe Regional Airport.

Santa Fe Regional Airport will see nearly triple the number of commercial airline departures as airlines restore a route to Phoenix and add daily nonstop flights to Dallas and Denver.

The south-side airport now has four daily departures, with that number expected to increase to 11 on June 3, according to flight schedules posted on the American Airlines and United Airlines websites.

“I think the main thing it recognizes is that Santa Fe is a very popular tourist destination,” said Stuart C. Kirk, executive director of the Northern New Mexico Air Alliance, which promotes economic development in Santa Fe, Taos and Los Alamos by enhancing use of the Santa Fe airport.

American Airlines is restoring nonstop service from Santa Fe to Phoenix on June 3, with daily departures from Santa Fe at 11:58 a.m. and 7:05 p.m. Santa Fe previously had nonstop Phoenix flights from December 2016 until April 2020, when the route was quietly dropped early in the pandemic because the flight was canceled numerous times with no passengers.

“Phoenix is what American has chosen as our connection to the West Coast,” said Randy Randall, executive director of Tourism Santa Fe, the city’s convention and visitors bureau. “It proves that Southern California and Phoenix is a strong market for Santa Fe. We have seen Phoenix grow remarkably in the last couple years.”

Randall noted only 20 percent of passengers flying from Denver to Santa Fe are from Colorado, and 80 percent are connecting from somewhere else. Denver is a hub airport for United.

“United has great connecting flights in Denver,” he said. “To go from one flight to four flights is a huge jump. We’re not just seeing recovery in the regional market but in the national market.”

Before the coronavirus pandemic upended air travel in March 2020, the federal Transportation Security Administration typically screened 2.2 million to 2.5 million air passengers each day across the country. That number plummeted below 100,000 from March 7 to April 6, 2020.

Air travel did not reach 1 million daily passengers at U.S. airports until Oct. 18 and then again during the Thanksgiving and Christmas-New Year’s holidays. But the passenger count has now been above 1 million every day since March 11, TSA records show.

That is still only half of pre-pandemic numbers, but with increasingly loosening public health restrictions and vaccinations going full speed, airlines are restoring flights that had been sidelined for a year.

“People are starting to think about what they want to do when they feel comfortable about traveling,” Kirk said. “They are saying, ‘Sweetheart, when the time’s right, let’s go to Santa Fe.’ ”

Kirk communicates regularly with airlines to look at adding more nonstop destinations to Santa Fe. American Airlines had planned an April 2020 launch of a nonstop flight to Los Angeles, but that was scrubbed by the pandemic.

“We already started major efforts that the Santa Fe-L.A. route is on American’s radar,” Kirk said. “There is a strong desire for [routes to] San Francisco, Houston and Chicago.”

When will the Santa Fe airport put up attractive directional signs and fix the parking lot? It seriously lacks a welcoming vibe and looks like a second rate facility. Hoping some of the American Jobs Plan brings money to improve the SF airport.

Just what we need. More people from Texas. I can sleep better tonight.

I’m a French man living here since nearly 5 years. At the beginning a flight Santa Fe to Paris was around 650 dollars. Not it’s the double. After that Santa Fe Paris was cheaper by Denver, difference of price paid you the hotels, the gas and the food.

Sometimes flying to Europe costed you 40 % less to do it from Albuquerque.

It seems that since the pandemic prices are averaged but ... still near the double looking forward in a short time of years.

Thanks Bronwen Denton-Davis. I needed the chuckle.

I'm so happy the nonstop to Phx is coming back!

So much for tranquility.

Air travel is the largest carbon polluter in Northern New Mexico after oil and gas production. The city's sustainability initiative is a costly liberal farce if we are unwilling to chose selective de-industrialization. Ban jets at SAF.

Ban air travel at the airport, is a statement I did not expect to read this morning. This will honestly carry my spirits through the weekend.

Laughed very out loud. Thanks Ernest :)

Not air travel, just jets. Do some research. The carbon emission reduced by driving your EV for 10 years are negated by one 6 hour jet journey.

thanks Kathy for your input on this. Can you post links to sources, please? This is a battle worth joining.

Imagine how much carbon emission Joe Biden contributes every time he trips or stumbles into Air Force One....or parades around in The Beast. I'd start by lecturing the ever so famous climate czar, John Kerry. He takes his private jet everywhere. Maybe, just maybe, you can lecture the left-wing hollywood elites on their jet travel.

So glad to hear these flights are being restored. But when will the airport be expanded and remodeled to accommodate all the new passengers?