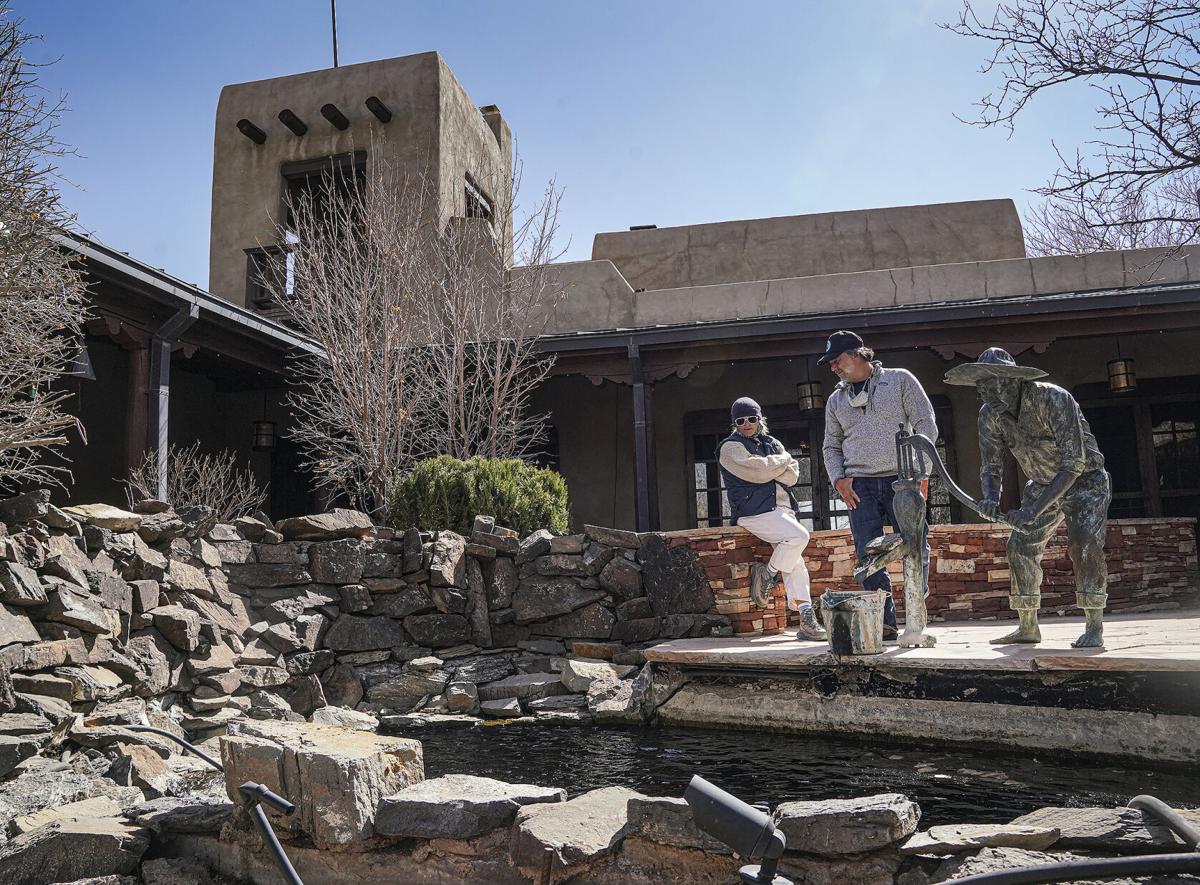 Christine Sperber and Jeff Hamaoui, two of the new owners of Saddleback Ranch in Galisteo, stand Friday outside one of four residences on the property, the Drogheda House. The ranch will now be home to the Modern Elder Academy. 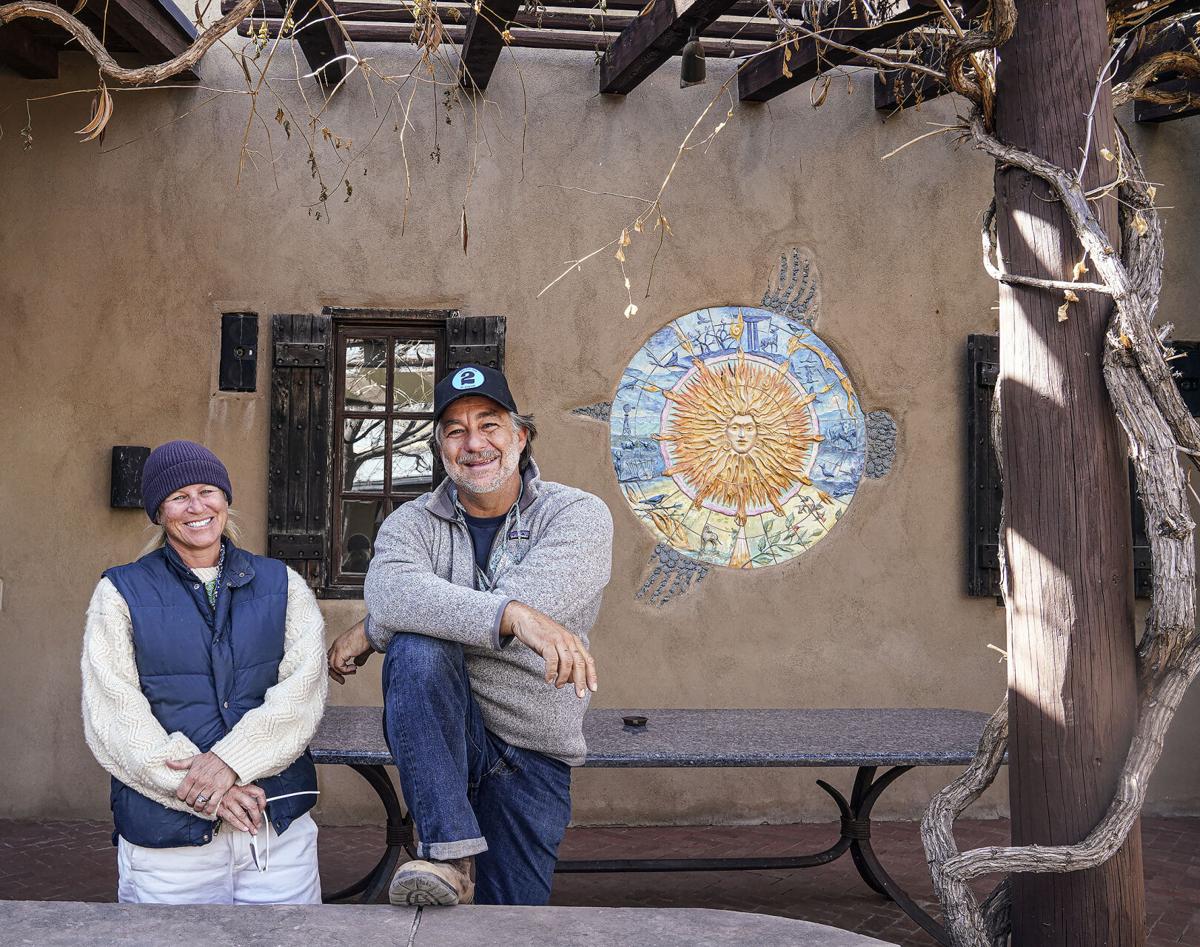 Christine Sperber and Jeff Hamaoui are two of the new owners of Saddleback Ranch in Galisteo. The ranch will be the new home of the Modern Elder Academy. 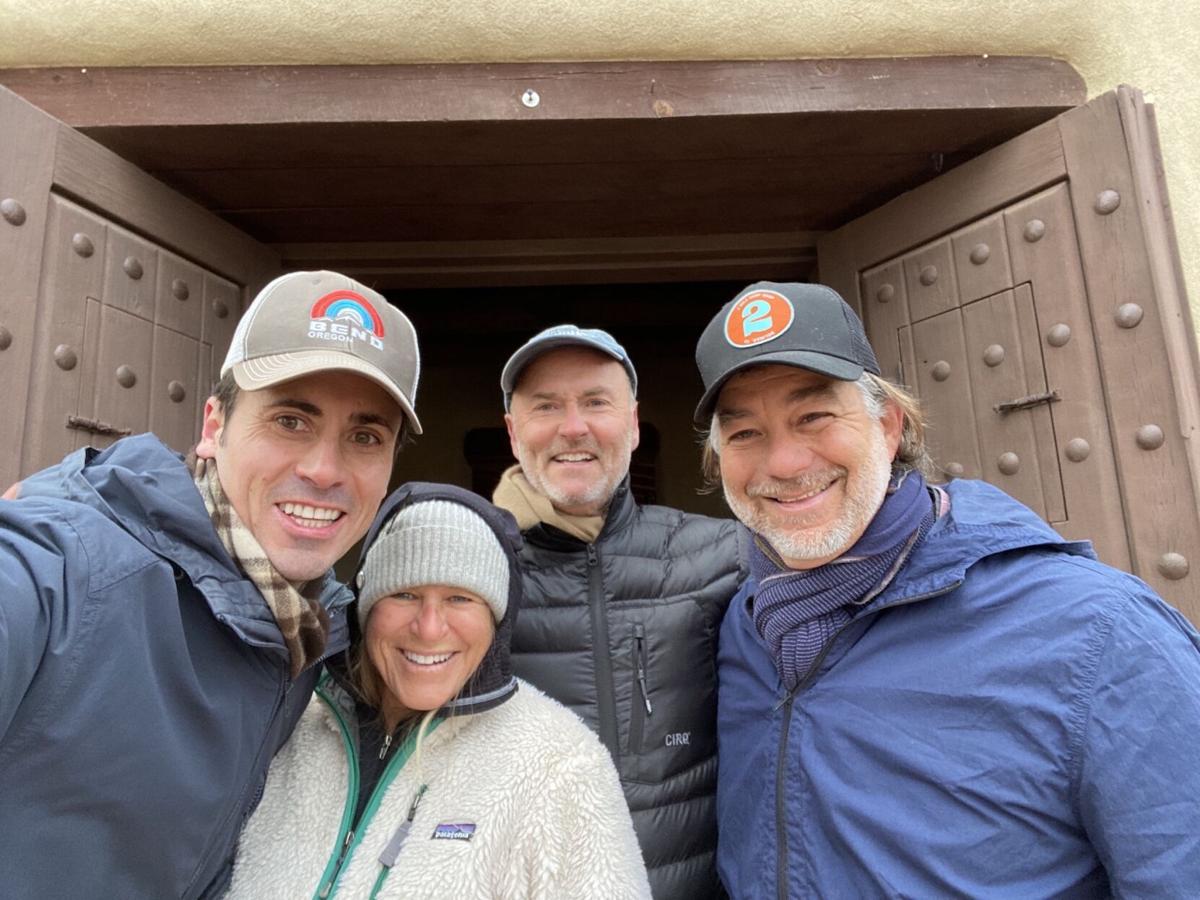 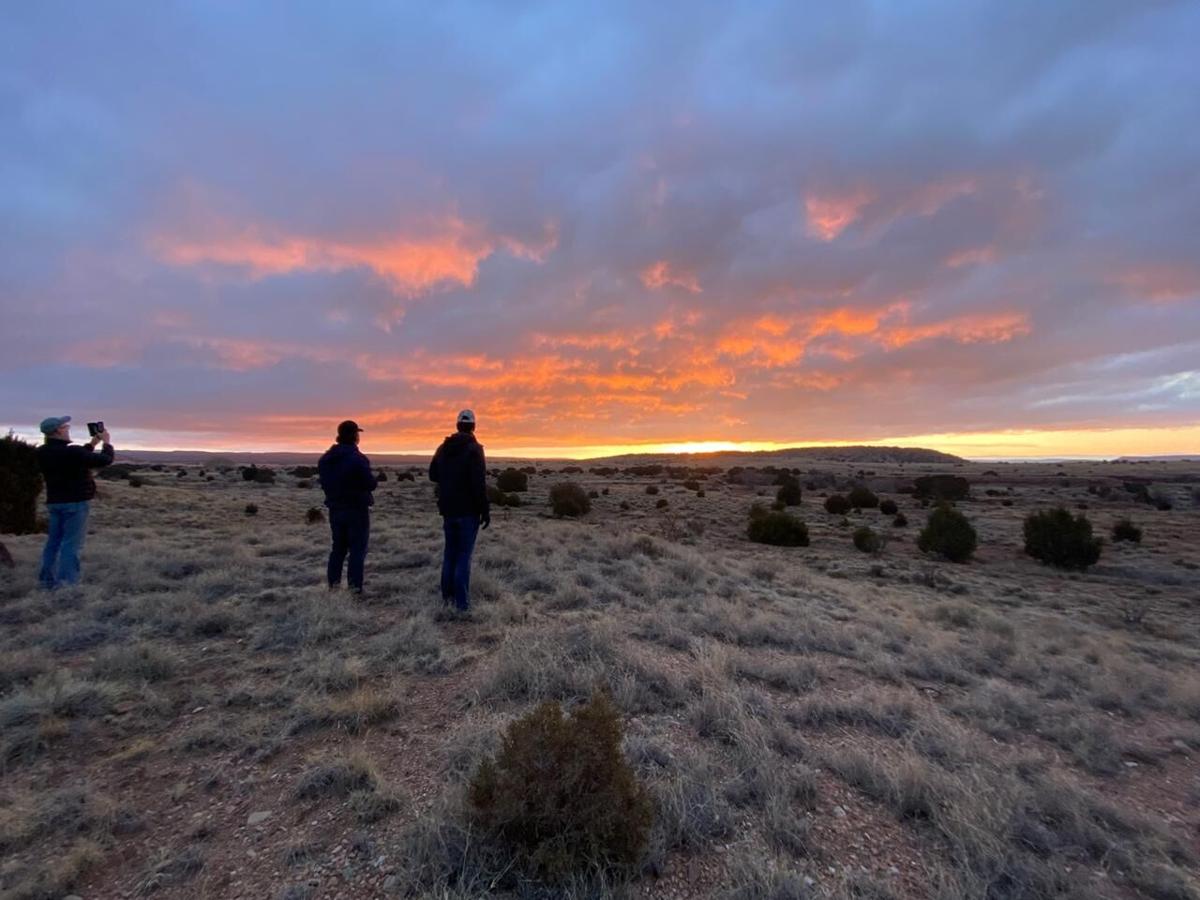 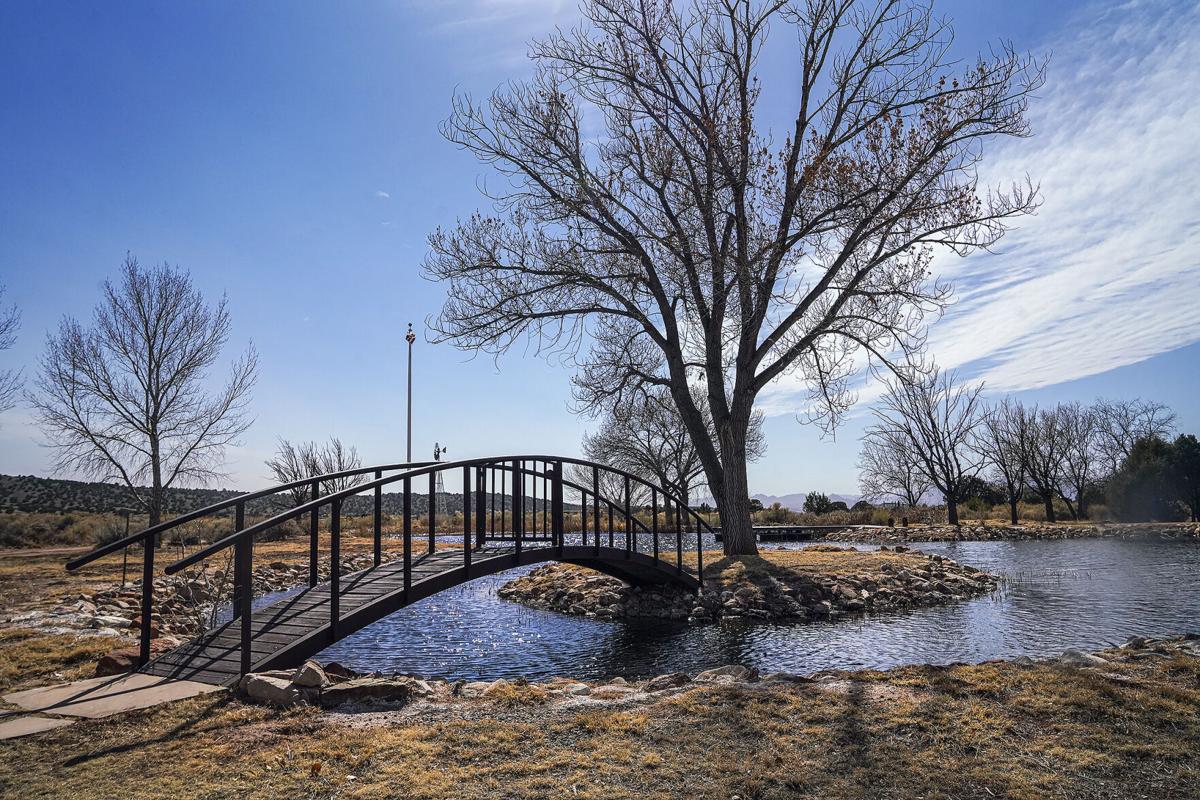 The large koi pond at Saddleback Ranch in Galisteo, which is set to be the U.S. location of the Modern Elder Academy.

Christine Sperber and Jeff Hamaoui, two of the new owners of Saddleback Ranch in Galisteo, stand Friday outside one of four residences on the property, the Drogheda House. The ranch will now be home to the Modern Elder Academy.

Christine Sperber and Jeff Hamaoui are two of the new owners of Saddleback Ranch in Galisteo. The ranch will be the new home of the Modern Elder Academy.

The large koi pond at Saddleback Ranch in Galisteo, which is set to be the U.S. location of the Modern Elder Academy.

Saddleback Ranch near Galisteo will became a boot camp for dealing with middle age — or, as new owner Chip Conley puts it, a “midlife wisdom school.”

Conley and co-founders Christine Sperber and Jeff Hamaoui launched the Modern Elder Academy in 2018 in Mexico. On Jan. 8, they purchased nearly 2,600 acres of Saddleback Ranch’s 3,250 acres for $8.5 million.

They selected the Santa Fe area as the location for the academy’s first U.S. expansion after considering 20 other places around the country — from Napa Valley, Calif., to Austin, Texas, to the Berkshires in Massachusetts.

“We’re excited about the Northern New Mexico area,” Conley said by phone from the academy’s Baja California Sur campus. “We just love the diverse nature [of people] of New Mexico. Nature is a part of our teaching program.”

Several factors enabled Conley to buy Saddleback for “half the price of the 2008 sale.” The previous owner, Dan Silvestri, a Houston-based shopping center magnate, put it up for an Oct. 14 auction with no minimum bid through Platinum Luxury Auctions.

Several bidders asked for more property details, which postponed the auction. Several parties, including Conley, subsequently made offers without the auction ever taking place.

The 2008 sale price was based on planned development that never happened, said David Ashcroft, managing director at Platinum Luxury Auctions.

“Santa Fe is a place people go to reimagine themselves,” Conley said. “We are a regenerative community. We could have more than one location in Northern New Mexico.”

Conley plans to renovate the ranch’s existing four homes and clubhouse. The 7,264-square-foot Drogheda house and 2,800-square-foot Chamisa house will be used for academy workshops. The 6,103-square-foot Windland house and a fourth house will be sold to people wanting to live at Saddleback.

Conley intends to build additional buildings for the academy as well as 20 to 30 homes to be sold as residences. He has enlisted Santa Fe-based Regenesis Group, a regenerative development firm, Santa Fe-based AOS Architects, and Santa Fe-based land planning and landscape architecture company Surroundings. He expects to open the local Modern Elder Academy in early 2023 and have homes ready to sell six months to a year later.

Conley launched the Joie de Vivre boutique hotel chain in 1986 at age 26 with a hotel in San Francisco’s Tenderloin neighborhood. He owned 52 hotels over the years and sold the company to Geolo Capital in 2010. Geolo sold the chain in 2018 to Hyatt Hotels Corp., which rebranded Joie de Vivre as JdV, currently with 19 hotels — eight California properties and 11 more in Chicago, Baltimore, New York, China and Sweden.

“To be honest, going through the dot-com bust, 9/11 and having the Great Recession, I was tired,” Conley said. “I was 50 and ready for something new.”

That took him to Airbnb as head of global hospitality and strategy.

“I was 52. Most of the company was 26,” Conley recalled. “I was helping them take their idea and go mainstream. I was the house mentor. At Airbnb, they called me the modern elder.”

That led him to write the book Wisdom at Work: The Making of a Modern Elder, published in 2018. He bought a house about 30 miles north of Cabo San Lucas in 2017.

“On a run, I had a Baja aha moment,” he said. “Why don’t we have a school to help people going through the transitions of life? I built the [Modern Elder Academy] campus around my house. I had the house about a year before we opened.”

Conley started pondering midlife as he had his own midlife transition.

“It became clear to me,” he said. “I had five friends who committed suicide. Why don’t we have a way to help people going through the transitions of middle age?”

That was what Conley, Sperber and Hamaoui launched in 2018. Conley described the academy’s opening year as a “huge success. It was a validation.”

“I wish my friends who committed suicide could have gone through this program,” he said.

The academy offers one-week workshops, with the most popular focusing on life transitions.

“How people are going to go through professional transitions, relationship transitions — divorce, empty [nest] transition, losing parents,” he said. “[There are] people who want to shift their professional life.”

The Modern Elder Academy’s definition of midlife is age 35 to 75.

“Midlife today starts earlier and lasts longer,” he said. “People are living longer. The organization leadership is moving younger and the world is changing faster. You can’t just pay your dues. You have to renew yourself. [The old way is] you learn until 25 and earn until 65. Now you may want to get a master’s degree at 40.”

Time and change are what makes our lives a journey. Please consider that Chip, Christine and Jeff all paid full payroll to the amazing local friends/workers employed in Baja Mexico during the pandemic. Keeping families fed even when their own business was shut down. These are your new Sante Fe neighbors. Caring and listening.

How much does it cost to be part of this?

There is a saying in New Mexico, "You can't eat the scenery." It seems like someone is always ready to jump on new ventures in town because it's too congested or too much traffic or too much something else. In rural areas, any attempt to bring in an entity that could increase jobs and opportunity - you can't ruin the views. While only going by the article, this venture doesn't sound so bad. Communities grow or they die. As an elder myself, I have found time becoming more precious as time goes on but depression and suicide among elders is a real problem. Many people spend their lives raising families, building careers, etc., and aging hits them unawares. I have always been a reflective person and I don't experience time in a linear fashion so I've basically been OK with aging except I'd like another 100 years and it doesn't work that way. But many elders do need to reassess and learn how to grow again. His project could become an asset and there is a long hearing and permitting process before a shovel is turned. I say, give this guy a chance.

It continues to blow me away the manner in which woo-woo millionaires ignore the less romantic real human diversity of Santa Fe, in service of the almighty dollar. My God, the actual problems of actual people in Santa Fe and the surrounding areas someone with those kinds of resources could solve.

Wow! For one thing, this is definitely not a cult! Chip is one of the kindest people you could hope to ever meet! He cares deeply about people going through midlife and are not happy. Chip, Jeff and Christine care deeply about the environment and the communities they build in. You guys are lucky this is who bought this beautiful property! It will be well taken care of and not ruined as you fear!!

I have some others about people peddling "help" for Hollywood trendy, fake "conditions", like getting to middle age.....A fool and his money are soon parted, and my favorite, there is a sucker born every minute........

“Twenty to thirty homes” is going to change the landscape of Galisteo significantly and, sadly. It’s very unfortunate that we cannot keep the Galisteo landscape as it is. We have already seen the changes out there with residential units and development. Ultimately, we will lose a beauty that cannot be matched anywhere else in the world.

Agree 2000%. Galisteo is a beautiful, open basin and needs to remain that way. Hey Modern Elders, go do this somewhere else where you aren't invading and ruining indigenous and historic lands.