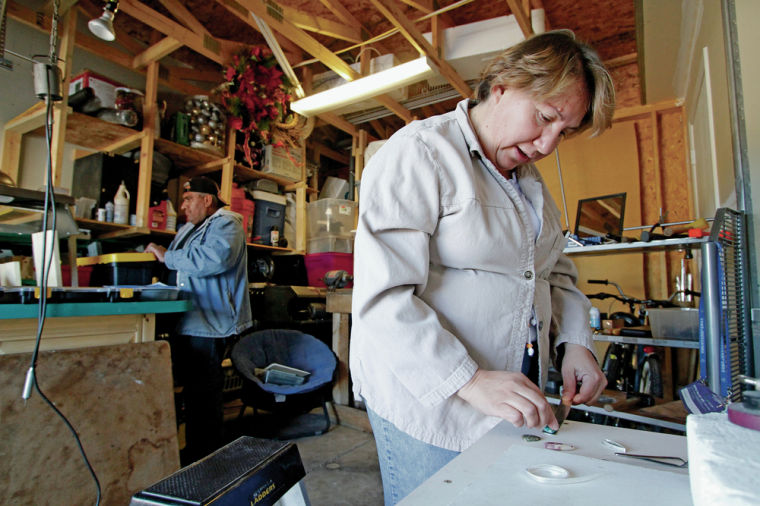 Mayte Cárdenas and her husband, Jacinto Arriaga, work on jewelry in their home last week. Since they got married six years ago, the couple have been designing their own silver jewelry. PHOTOS BY Luis Sánchez Saturno/The New Mexican 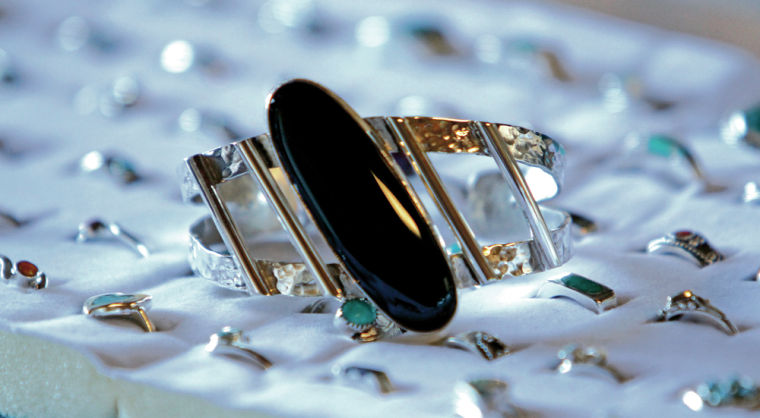 A bracelet by Jacinto Arriaga. 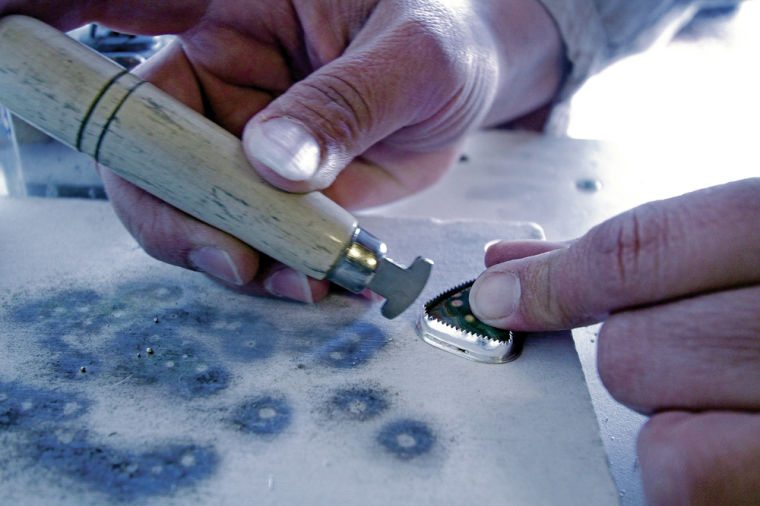 Mayte Cárdenas works on jewelry in her home last week.

Mayte Cárdenas and her husband, Jacinto Arriaga, work on jewelry in their home last week. Since they got married six years ago, the couple have been designing their own silver jewelry. PHOTOS BY Luis Sánchez Saturno/The New Mexican

A bracelet by Jacinto Arriaga.

Mayte Cárdenas works on jewelry in her home last week.

Mayte Cárdenas and Jacinto Arriaga came from Mexico to Santa Fe 16 years ago with the dream of owning their own business. Cárdenas thought that a food truck would be the easiest to run, as she’s worked at restaurants since she moved from Chihuahua. But Arriaga had been working for a jeweler designing jewelry for the past 11 years, and he told his wife, Cárdenas, that they should take a shot at designing their own.

Since they got married six years ago, the couple have been designing their own silver jewelry, adopting a form of art they both said they wouldn’t have done if they were still in Mexico. Not that they have forgotten their home country. They have found inspiration in Aztec and Maya symbols when creating their jewelry. But they also have used turquoise rocks from Arizona and New Mexico in their pieces — something commonly seen in New Mexican jewelry.

“I believe that our pre-Hispanic history isn’t valued as much, and it’s not studied enough,” Cárdenas said.

In 2011, the couple had their business — Sophie’s Gifts, named after their 2-year-old daughter — near the Plaza for about six months, but had to close it because rent was too high and sales weren’t keeping up. Since then, they have been selling their work at shows usually frequented by American Indians selling their crafts. Cárdenas said that among all the American Indian artisans, they’re the only Mexicans.

“When we went to sell our jewelry at a Santo Domingo [Pueblo] show, we went with some hope to sell at a place where American Indians are experts at making jewelry, so we went with low expectations,” she said. “But we were surprised, because we did well in selling.”

She added that many Native artists have given them tips on how to make their craft better.

In order to start their business, Cárdenas, along with her mother, started taking jewelry-making classes at Santa Fe Community College. She and her husband began with a few semesters of those classes and history books on the Aztecs and Mayas. So far, they have created more than 500 pieces and have slowly sold a few hundred at craft shows.

“We’ve been growing our business, not just in sales and quantity, but also in quality,” she said. “We want [our jewelry] to have a better value, not just monetary, but have the value of our culture and at the same to have [New Mexican] culture, too.”

Arriaga said that when he first moved to Santa Fe and took up a jewelry-making job, he always saw it as mundane work to pay the bills and feed the family. But now that he creates his own pieces, he appreciates the craft.

Donald Lanzer, one of Cárdenas’ teachers at the community college and a local jeweler, said that he was happy to hear one of his former students has used the knowledge to pursue a new career. “It’s just very gratifying as a teacher to see somebody take the knowledge and apply it and turn it into a potential business and potential money,” he said. “It’s always nice when you can mix your own culture with your own stuff.”

The couple will be showcasing their jewelry from 9 a.m. to 2 p.m. Saturday at a crafts show at Kingston Residence of Santa Fe, 2400 Legacy Court. Contact Sophie’s Gifts at 795-2207 or go to www.sophiesgifts.net.

"Mayte Cárdenas and Jacinto Arriaga came from Mexico to Santa Fe 16 years ago with the dream of owning their own business."

What would be so difficult about wrting it this way....Mayte Cárdenas and Jacinto Arriaga illegally entered the United States from Mexico 16 years ago with the dream of owning their own business.