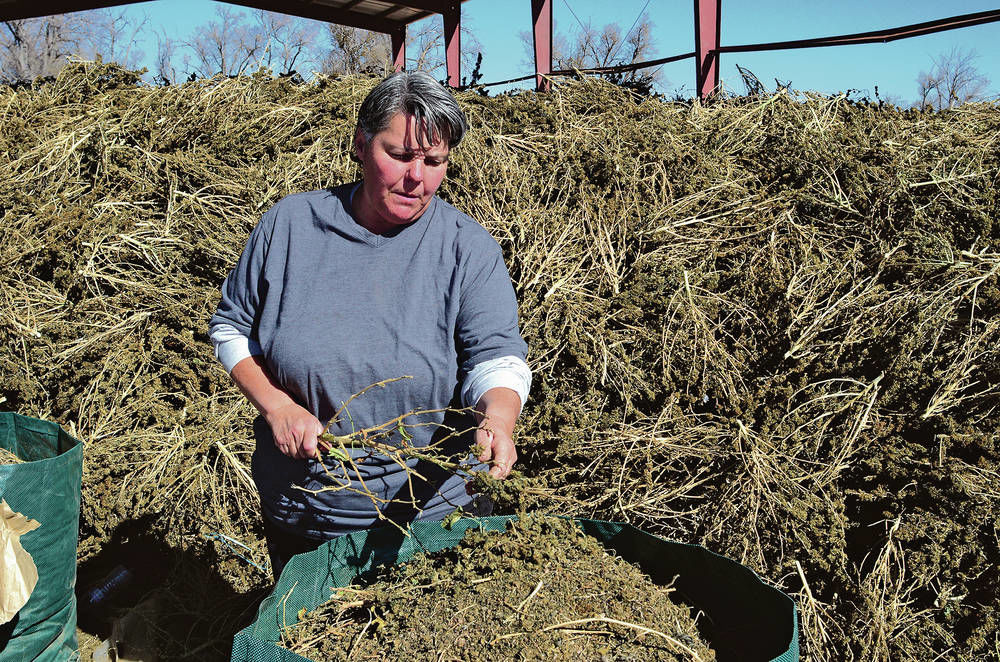 Jill Brown shucks hemp buds at her farm in Estancia. She expects the buds to sell for $20 per pound. ‘Nobody makes $20 a pound on tomatoes, corn, alfalfa or any of that. This is a big cash crop,’ Brown says. ‘You can take 10 acres and actually make something out of it for a summer.’ Michael Gerstein/The New Mexican 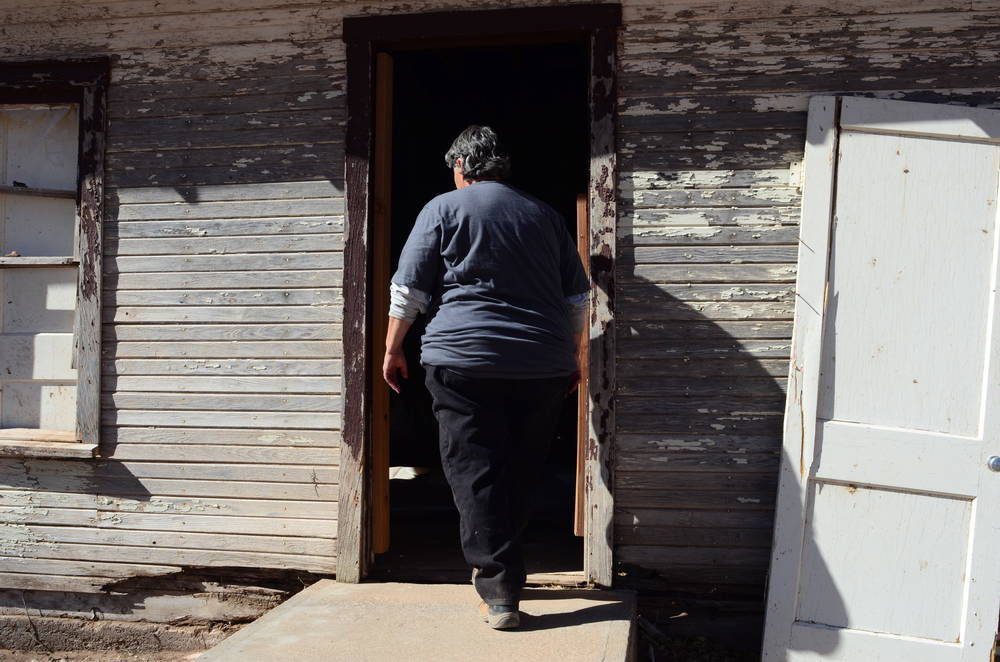 Jill Brown walks inside an old shack she dubbed the ‘Haunted Hemp House,’ where an abundance of hemp dries. Michael Gerstein/The New Mexican 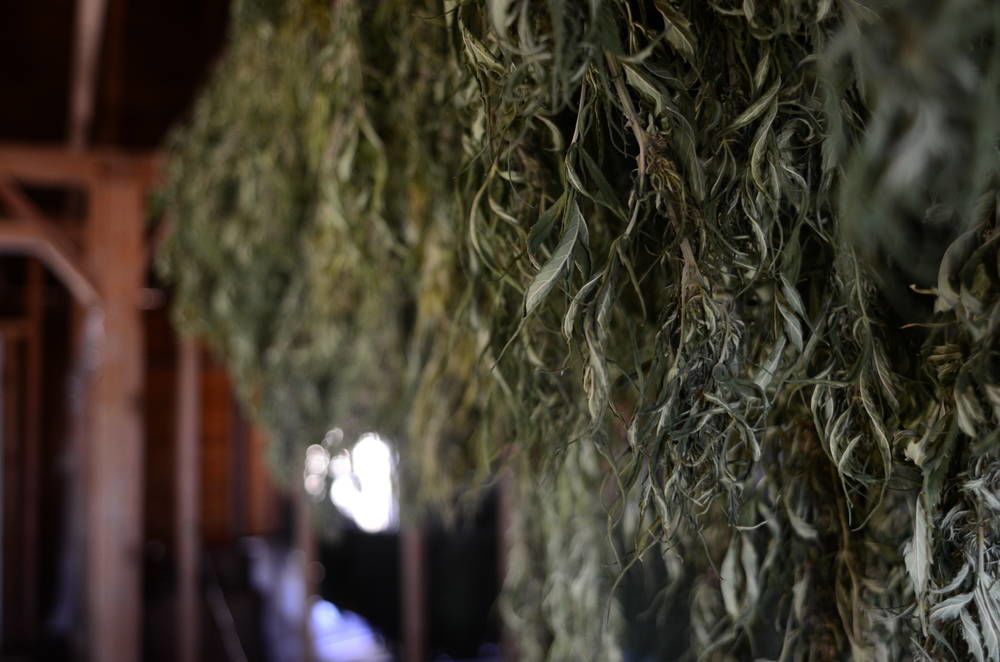 Hemp dries at Jill Brown’s farm in Estancia. CBD-rich hemp like the kind Brown grows can sell anywhere from $20 to $40 per pound. Michael Gerstein/The New Mexican 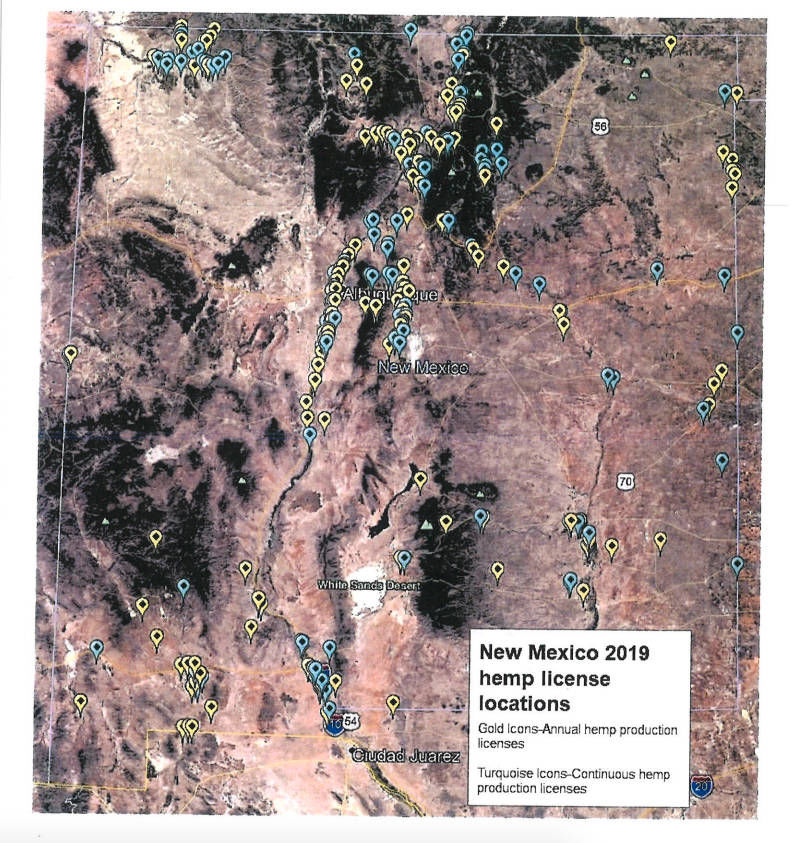 Jill Brown shucks hemp buds at her farm in Estancia. She expects the buds to sell for $20 per pound. ‘Nobody makes $20 a pound on tomatoes, corn, alfalfa or any of that. This is a big cash crop,’ Brown says. ‘You can take 10 acres and actually make something out of it for a summer.’ Michael Gerstein/The New Mexican

Jill Brown walks inside an old shack she dubbed the ‘Haunted Hemp House,’ where an abundance of hemp dries. Michael Gerstein/The New Mexican

Hemp dries at Jill Brown’s farm in Estancia. CBD-rich hemp like the kind Brown grows can sell anywhere from $20 to $40 per pound. Michael Gerstein/The New Mexican

ESTANCIA — About a mile down a dusty dirt road, Jill Brown is shucking the bud from a hemp plant in front of a warehouse-sized pile that looks more like tumbleweed than $1.2 million in the making.

The two business women still have to sell it. But at $20 or more per pound — which is less than half of what it was worth four years ago — their stockpile of hemp is worth far more than any green chile, alfalfa or lettuce crop.

“Nobody makes $20 a pound on tomatoes, corn, alfalfa or any of that. This is a big cash crop,” Brown says. “You can take 10 acres and actually make something out of it for a summer.”

The Santa Fe resident started farming hemp in San Luis, Colo., about five years ago. Brown then bought 240 acres in Estancia shortly before the Legislature passed a measure signed into law by Gov. Michelle Lujan Grisham this year that regulates the production, testing, research, manufacturing and transport of commercial hemp and its derivative products.

In New Mexico and across the nation, hemp is in high demand for a compound known as CBD — a cannabinoid not yet tested by the federal Food and Drug Administration for most of its purported uses but touted as a natural remedy for anxiety, insomnia, pain, inflammation. It is even the active ingredient in an FDA-approved prescription drug for epilepsy called Epidiolex, which could cost an annual $32,500 per patient, the Wall Street Journal reported.

But it is an incredibly versatile plant. Aside from CBD tinctures, lotions and soap, hemp can be used for anything from making rope and paper to battery parts, automotive supplies, clothes, cosmetics, plant protein and plastics.

The Lujan Grisham administration is pushing marijuana’s cousin as an industry “bursting with potential” — one that will help diversify the state economy, create new high-wage jobs and drive innovation, the governor said in April after signing legislation to regulate the burgeoning market.

The state has offered more than $2 million in grants and job training to Rich Global Hemp Corp.in Doña Ana County.

“At the end of the day, it’s going to become a very good crop,” said New Mexico Agriculture Secretary Jeff Witte, while touring Brown’s Estancia farm last week. “I can tell you that when it’s attracting people into the ag industry that haven’t been here in a while. My expectation is that it’s going to continue that legacy of New Mexico agriculture into the future.”

The industry is growing, and by some estimates growing faster than projected.

Nationally, consumer sales for the hemp industry climbed to $820 million in 2017, according to the most recent data available from the Hemp Business Journal. About $190 million of that comes from CBD product sales.

New Mexico has issued more than 400 hemp cultivation licenses in the first year alone of the program, far exceeding a nonpartisan fiscal analysis that estimated when the bill was being debated about 50 permits would be approved in fiscal year 2020.

The New Mexico Department of Agriculture has licensed more than 7,000 acres and more than 8.3 million indoor square feet for hemp production, according to the department.

Duke Rodriguez, president and CEO of New Mexico’s largest medical marijuana company, Ultra Health, says he expects the hemp market value to be “multiple times larger than” the marijuana industry in the long run. Rodriguez is working with Tel Aviv-based Panaxia on a contract to produce 1.8 million CBD tablets for a nascent company in California.

The industry has so much potential, “We’re actually talking to groups about selling overseas,” Rodriguez said.

Agriculture Secretary Witte said processors in particular are looking at New Mexico as a place to set up shop because of the state’s unique laws that protect them from prosecution if they test or receive product that exceeds the federal THC for hemp.

THC is the main psychoactive ingredient in marijuana — the substance that gets users high. It occurs naturally, at much lower doses, in hemp strains bred for more CBD. This is one reason hemp plants have to be harvested before the THC content gets too high and another factor that can make hemp farming risky.

In 2018, Congress legalized hemp for commercial use but only allowed hemp plants to contain up to 0.3 percent THC. Plants exceeding the limit must be destroyed, and that can translate into million-dollar losses if farmers don’t know what they’re doing.

But with New Mexico’s hemp protections for those who exceed the limit, lawmakers who supported the plan to boost hemp farming see it as a way to get young farmers back into the agricultural industry.

“Family farms are dying. Grandsons inherit grandma and grandpa’s house, and they don’t want to farm that land whether it’s one acre or 10 acres,” said state Rep. Derrick Lente, who sponsored legislation last session to regulate the hemp industry.

“You’ve got people who have 5 or 10 acres that can grow an economic crop,” said Lente, a Democrat whose district includes Rio Arriba, Sandoval and San Juan Counties. “Now it’s a crop that’s not easy. There’s risks. But it gives them an opportunity.”

The “biggest bottleneck” in selling the vast quantities of hemp now grown across the country is the lack and expense of processing machinery needed to transform raggedy plants into fiber and other materials, said Erica McBride Stark, executive director of the Washington D.C.-based National Hemp Association.

McBride Stark argues that once processing machinery becomes more readily available, the industry will take off. In the meantime, many farmers in New Mexico are awash with more hemp than they know what to do with.

So many first-time farmers scrambled to join the New Mexico hemp rush, there aren’t enough buyers to go around, said Anthony Ortiz, co-owner of the three-acre Atrisco Valley Farm and owner of Kurple magazine, a medical marijuana publication.

That includes farmers who asked Ortiz to help them sell more than 2.5 tons of raw hemp.

“They’re all calling me right now, asking me to help them move their flower,” Ortiz said. “If farmers grew hemp this year, the biggest problem they’re having is selling it because right now there is an abundance.”

These weed farmers need to be ready for a lesson in free market economics, and the supply/demand curves of a commodity. The global market for this weed has never been large, and many countries and other states produce it, most all cheaper than NM. What happens when you are not the low cost producer of a commodity?https://www.inquirer.com/business/weed/hemp-farming-glut-no-guarantees-supply-us-20190916.html

Be careful what you read into this article, on one hand they say it is a high demand crop , but on the other hand everyone is looking for a buyer and sitting on their crop as well as the per pound price will drop with over availability. Like anything when you hear it is a good thing to get into usually it is too late. Colorado went thru the same thing when they legalize pot, everyone grew it and when the dust cleared and the markets settled their was way to many growers for the market. So proceed cautiously