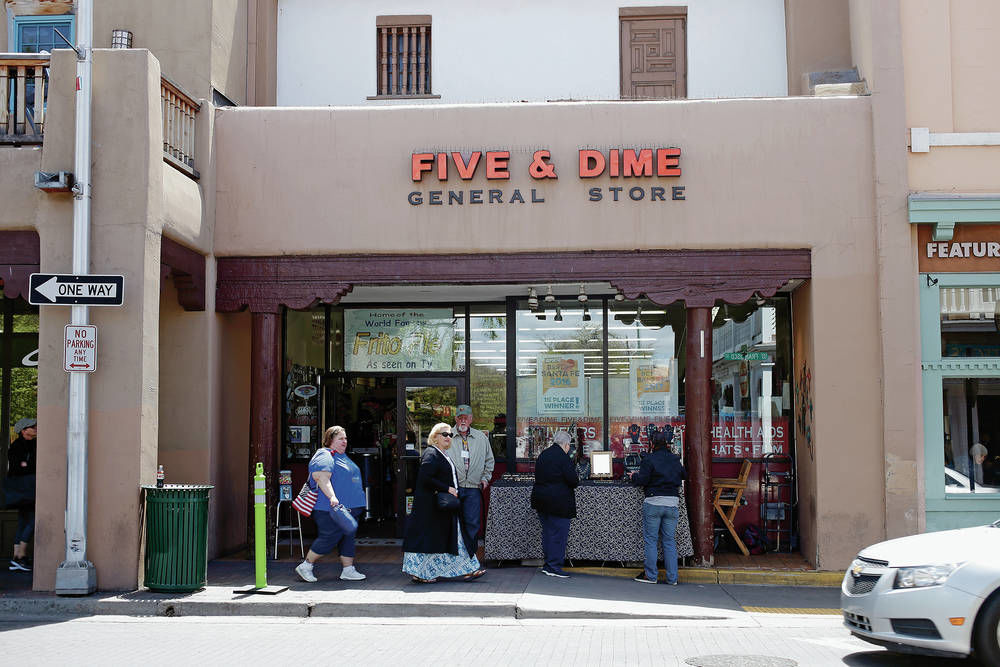 Five & Dime General Store on West San Francisco Street turns 20 years old this week. What began as a catch-all emporium at the site of a defunct F.W. Woolworth store has grown into a chain of stores in pedestrian-friendly historic areas in cities nationwide. Luis Sánchez Saturno/The New Mexican 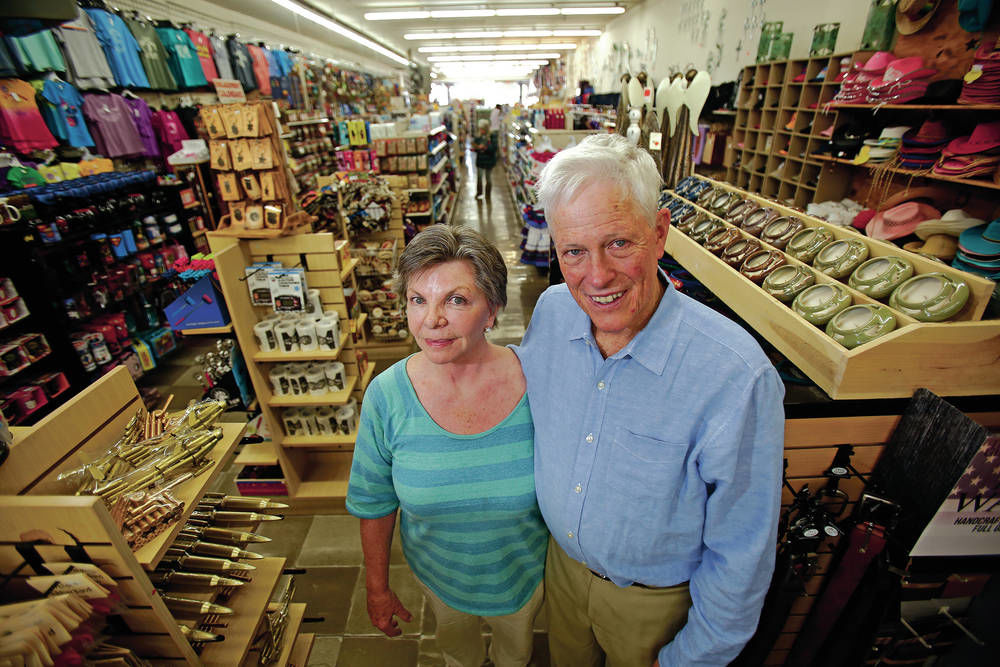 At the start, saving some vestige of Woolworth’s wasn’t about building a chain of retail stores, say Deborah and Earl Potter. Their plan was to save something unique in downtown Santa Fe and keep jobs there intact. Luis Sánchez Saturno/The New Mexican 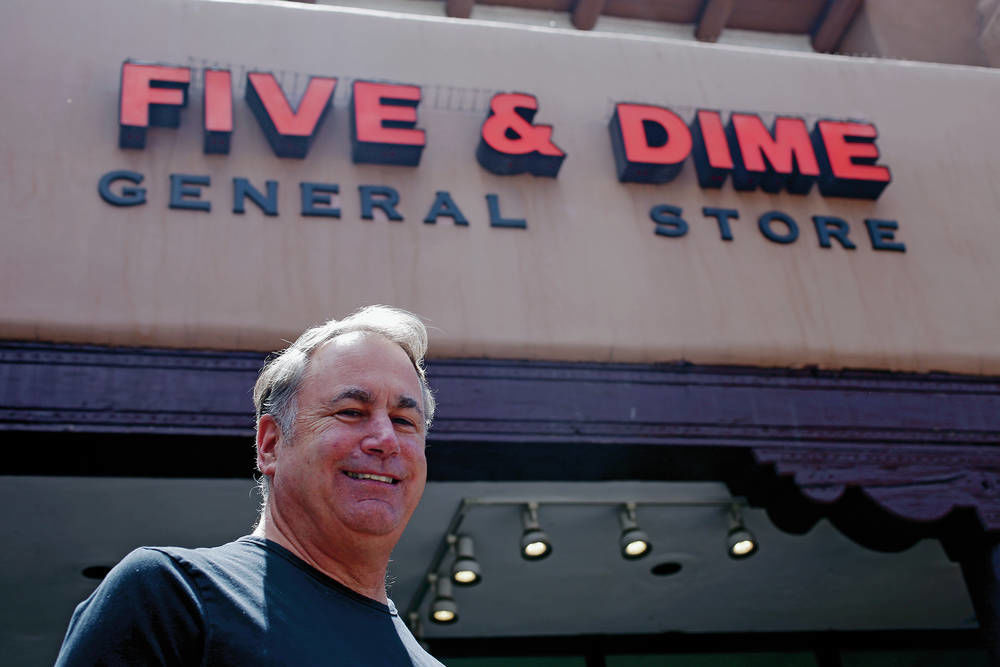 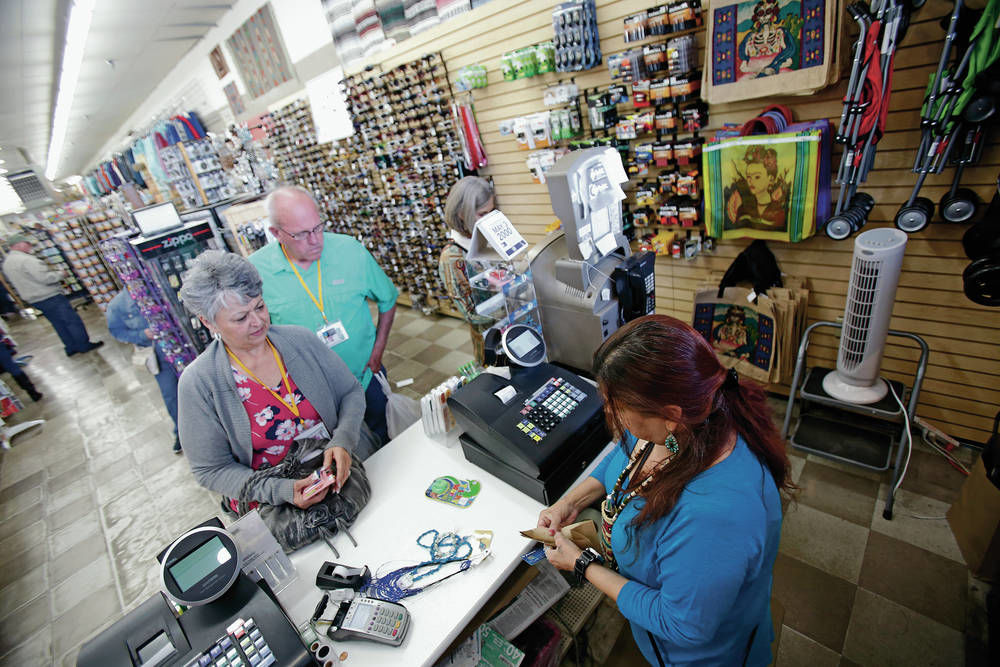 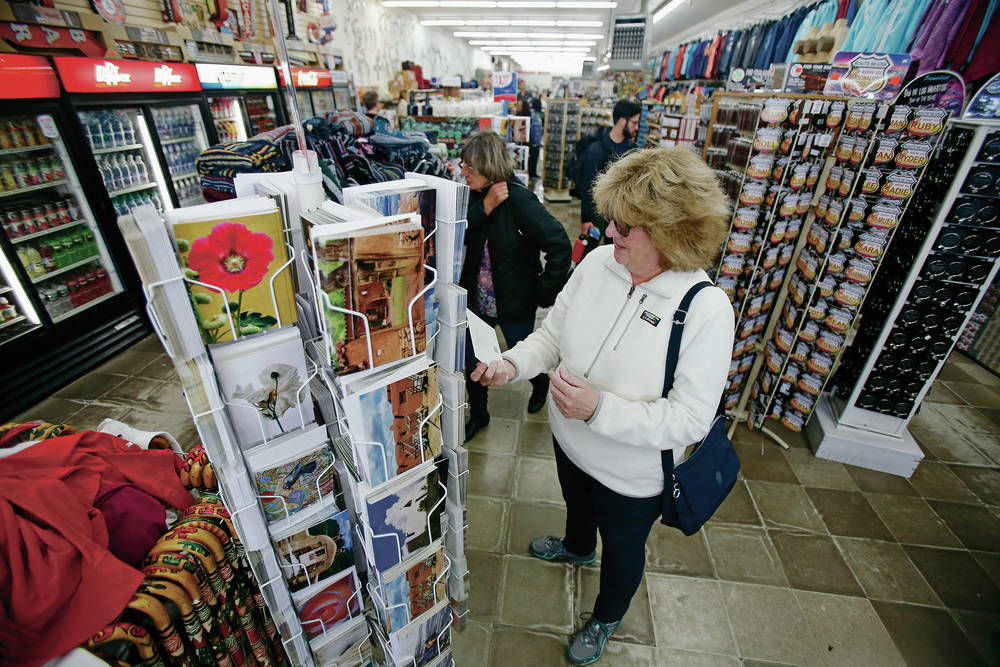 Wednesday marks 20 years since Five & Dime General Store on the Plaza opened as a smaller, repurposed version of the doomed F.W. Woolworth on the same site.

Since then, the company behind Five & Dime has opened eight more locations on the same model: catch-all emporiums in pedestrian-friendly historic areas that sell things people need, as well as a whole lot of things they don’t need but will probably buy anyway. The formula, born in New Mexico, has had a ripple effect that reaches to nearly every time zone in the nation.

This week the 10th store in the chain is expected to open in St. Augustine, Fla. The company owners didn’t plan a new store for the 20th anniversary; it just worked out that way, they said.

“I think it’s going to be probably one of our most successful, if not the most successful store,” said Five & Dime co-founder Earl Potter. “It’s just a phenomenally good location.”

The St. Augustine Five & Dime will stock most of the same eclectic variety of merchandise available at the store in Santa Fe, with one exception: It will not sell Frito pies, the made-in-the-bag concoction of Frito-Lay corn chips, chile and cheese sold only at the Santa Fe location. And it will have no lunch counter.

Santa Fe’s Five & Dime started a small business empire that stretches from Savannah, Ga., Charleston, S.C., and St. Augustine in the East to San Diego and Monterey, Calif., in the West. In between, the chain has branches in Branson, Mo., Kansas City, Kan., and two in San Antonio — one near the Alamo and one on the River Walk, the second-oldest in the chain and its best performing.

“To appeal to the masses, I think, simplifies it,” said Mike Collins, CEO of the parent company, UTBW LLC. “We get a high capture rate of the people that walk in front of our store by offering such a variety. Also, we do great by the locals. We wouldn’t be successful, or do the volume we do, without the local community.”

The chain is on track to make $15 million in gross revenue this year, he said. The stores run on a 55 percent margin, meaning, for example, that merchandise it buys for 45 cents is sold for a dollar, Collins said.

The story of the Five & Dime founding in Santa Fe is a familiar narrative. In 1997, with the Woolworth chain about to go under, Potter’s wife, Deborah Potter, read a morning headline about the Santa Fe store’s impending demise.

“A big headline: ‘Woolworth’s Closing,’ ” she said. “You could feel the Greek chorus emanating from the print.”

At the start, saving some vestige of Woolworth’s wasn’t about building a chain of retail stores, the Potters said. The plan was to save something unique in downtown Santa Fe and keep the jobs there intact.

“Whoever saves this would be a real hero,” Deborah Potter said. “At this point in the history of downtown, everything was becoming a [pottery] and jewelry shop.”

Earl said Deborah turned to him and said: “Look, Woolworth’s is closing. We have to save this.”

“And I wasn’t awake yet and I said, ‘I’m a real estate lawyer, I don’t know anything about retail,’ ” he recalled.

However, they did know something about building a business. The two were part of the group that founded Hotel Santa Fe — the success of which, Earl said, hinged on finding a good manager to run it. Perhaps, he recalled his wife saying at the time, Woolworth’s already had that person in place.

Either way, Earl Potter awoke and made his way to Woolworth’s, where he found a chaotic scene. He left a business card for Collins, the Woolworth’s manager — a card Potter retrieved and keeps framed in his second-story office on West Marcy Street. Collins remembered being bombarded by callers the day news broke of the store closing.

“But then I saw this card that Earl had left and I guess we had the same type of handwriting,” he said. “There was just something about the chicken scrawl that, I don’t know, endeared me to it is the word, just for some reason that was the only phone call I returned.”

The Five & Dime sits in about one-fourth the space that Woolworth’s occupied. A wall went up to separate the Five & Dime from the remaining portion of the old Woolworth space, now the Santa Fe Arcade, a collection of restaurants and shops selling art, crafts, jewelry and clothing.

Collins trimmed the inventory down to the 25 percent of merchandise that generated about 80 percent of sales. The mix of ordinary items — like over-the-counter medications, microwaveable soups, souvenirs, sunscreen and bottled water — worked well, he said. A survey of the Santa Fe store yields a mingled inventory that appeals to the impulse buyer, anything from local souvenirs to dried chile mix, hats, toys of all varieties and gag items.

The snack bar, the only one in the Five & Dime chain, attracts not only tourists but lunchtime schoolchildren, too. The basic hot dog goes for $2.95, a Frito pie for $5.25.

Collins said the Five & Dime proved a success after the first six months. Five years later, the company opened the River Walk location in San Antonio. Seven more opened between May 2006 and March 2013. Earl Potter’s experience as a real estate lawyer and helping rewrite the Santa Fe city code on historic preservation proved an asset for a company that specifically sites its stores in historic downtown areas.

“Real estate people have a tendency to look at [historic preservation] as a negative, but it really does preserve the quality of the town,” he said. “It’s also an advantage. It’s quite a barrier to entry for keeping the big-box [stores] and the big competitors out of here.”

The company is looking at future stores in a handful of possible locations, including Portland, Maine, Williamsburg, Va., Park City, Utah, and Gatlinburg, Tenn. The Kansas City store, located inside a mall, might not last much longer, Earl Potter said. The company also looked at New Orleans and Key West, Fla., but wasn’t quite sold on either location.

“The reason we’re not there right now [in Key West] is it’s a big bar. Until that backs off a little bit, it’s basically a place where you go with your buddies,” he said. “It’s not family friendly.”

That, of course, has never been a problem in Santa Fe. And the Five & Dime enjoyed a moment of fame in October 2013. That’s when Anthony Bourdain, food critic, former chef and host of the CNN travel series, Parts Unknown, disparaged the look and feel of the Frito pie, but deemed it “quite delicious.” The episode did little or nothing to impact sales, Collins said.

At the start, film, which tourists at one time loaded into cameras, was the best-selling item, Collins said. The Five & Dimes don’t even sell film anymore. They also sold thousands of postcards, but in the era of the selfie, those sales have fallen, too, said Earl Potter. The stores are supplied by more than 100 different vendors, some unique to each location.