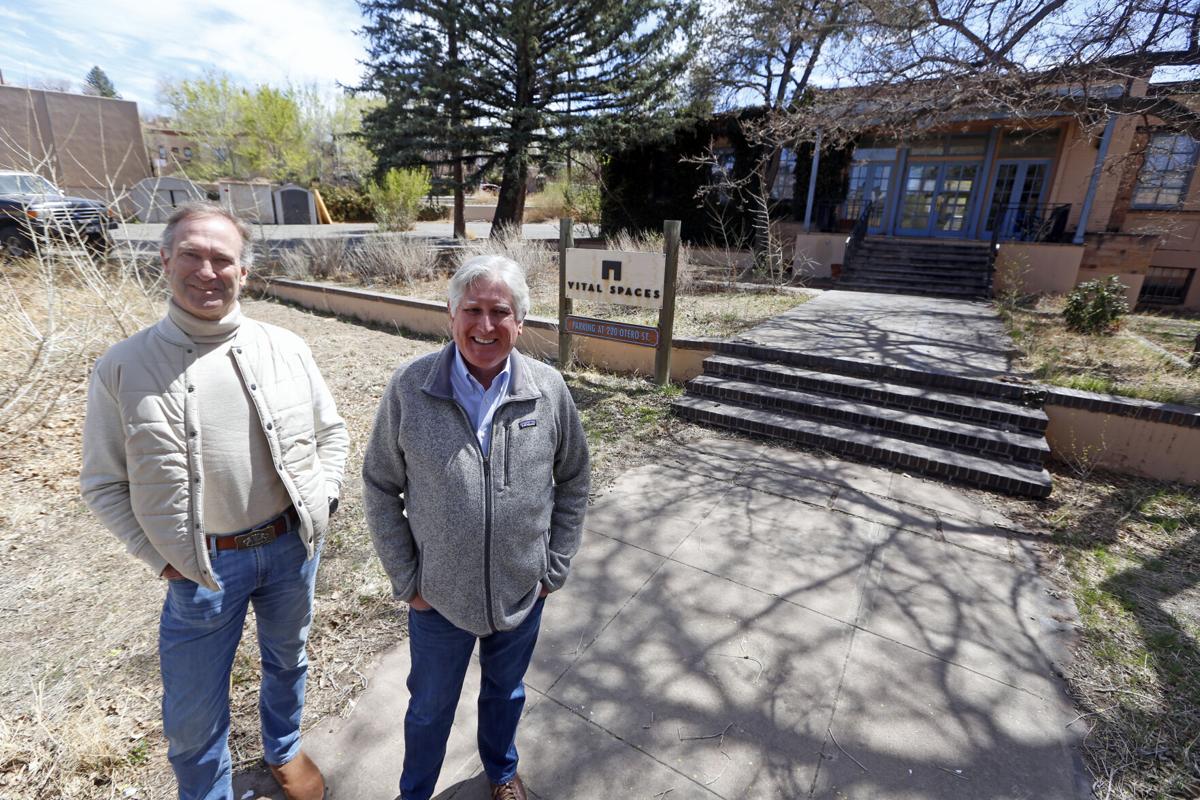 Andy Duettra, left, and Marc Bertram, owners of the McKee Office Building on 220 Otero Street, plan on developing the one-acre property into a hotel. 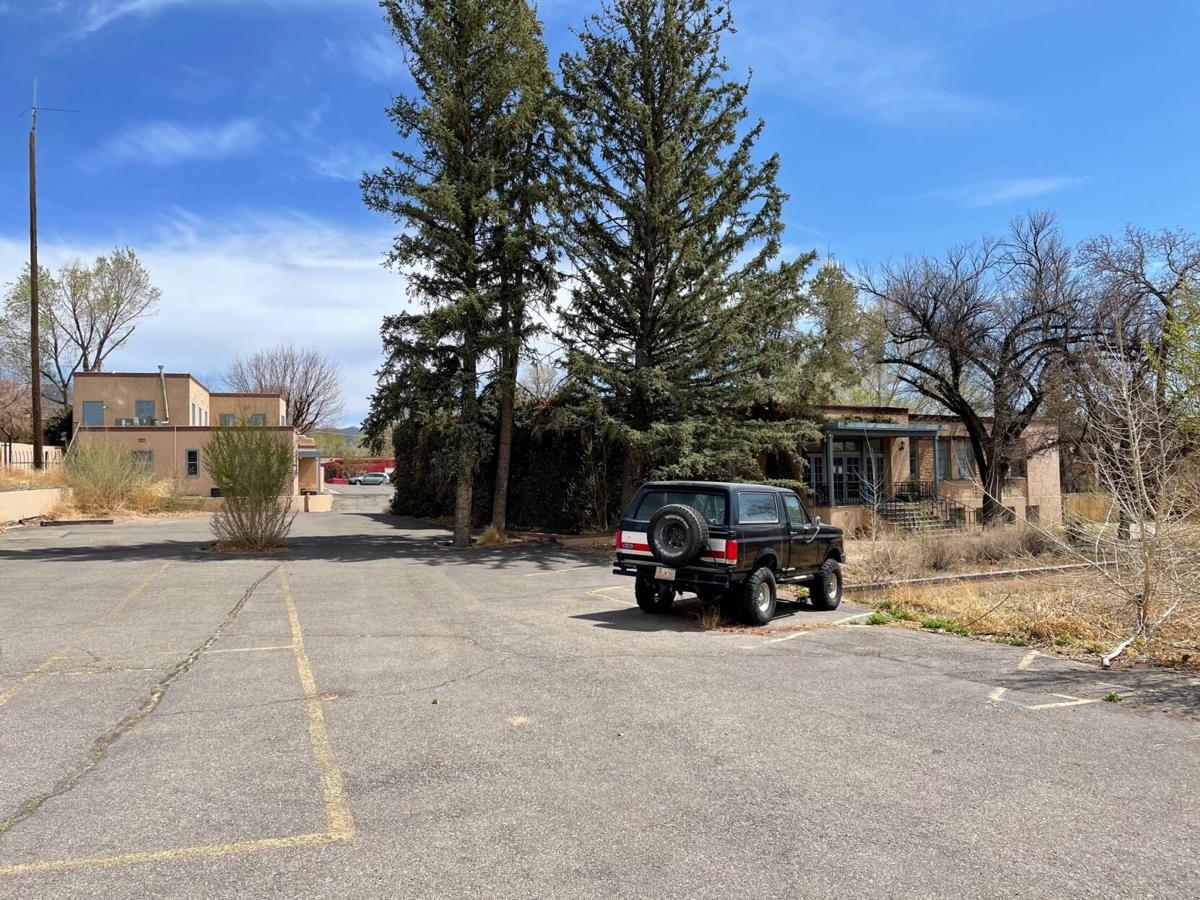 Developers behind the proposed Washington Inn at the McKee building property want to add a two-story, 11,175-square-foot structure where most of the guest suites would be.

Andy Duettra, left, and Marc Bertram, owners of the McKee Office Building on 220 Otero Street, plan on developing the one-acre property into a hotel.

Developers behind the proposed Washington Inn at the McKee building property want to add a two-story, 11,175-square-foot structure where most of the guest suites would be.

They like to describe it as an oasis a block and a half from the Plaza — a hotel that will be nearly invisible from Otero and Washington streets.

Developers behind the proposed Washington Inn are starting with the ivy-graced Territorial Revival-style McKee Office Building at 220 Otero St. and plan to add a two-story, 11,175-square-foot structure where most of the guest rooms — or, rather, suites — would be.

The McKee building sits 200 feet behind the McKee’s Otero Street parking lot and 300-plus feet down an arrow-straight walkway from Washington Street.

Duettra and Marc Bertram bought the hidden-in-plain-sight property the equivalent of a football field behind Santacafé and Sotheby’s International Realty Santa Fe in June 2016.

“Show me the other acre of land a block and a half from the Plaza with a historic building,” Bertram said.

Short-term rentals and converting historic buildings is the bread and butter for Bertram and Duettra, whose thumbprints are all over downtown Santa Fe.

Bertram owns the Lincoln Place and Marcy Plaza office buildings, along with the Marcy Street Garage that backs onto the McKee property and will be used for Washington Inn guests. Bertram, 61, also created the Hotel Parq Central from a historic railroad hospital in Albuquerque, and he is a partner in the Zia Station development.

“None are in residential neighborhoods,” Duettra said.

The Santa Fe Historic Districts Review Board last week delayed approving the Washington Inn project because some board members wanted a portion of the new building pulled back about 20 feet so it doesn’t block the view of the McKee building from Washington Street. Bertram and Duettra are pleased with the H-board meeting outcome and are agreeable to the panel’s suggestions.

Pending all the city approvals and permitting, the partners hope to start construction in the first half of 2022 and welcome guests in summer 2023.

Washington Inn will be a hybrid boutique hotel following short-term rental concepts. Each of the 31 rooms, measuring 600 to 1,400 square feet, will be suites — 21 with one bedroom, seven with two bedrooms and three with three bedrooms.

“It’s a hotel that will definitely appeal to the Airbnb crowd when other traditional homes may not,” Bertram said.

In the short-term rental business themselves and each with millennial kids, Bertram and Deuttra are acutely aware these kinds of options are the preferred mode for a swiftly growing number of travelers and newer hotels.

“We believe travelers are going to be wanting a different type of product in the future, in part driven by the pandemic,” Bertram said. “I think we will have people who stay longer. It’s not uncommon for us to have people with one- or two-month stays [at AdobeStar short-term rentals].”

Washington Inn will be a short-term rental with benefits. The McKee building will have a front desk, a meeting room doubling as a wedding venue and a gym — features not typically found in these types of neighborhood settings.

A hotel idea is nothing new for the McKee property. Dan Terrell, who died last month, had owned the property for nearly 25 years and had done the last renovations of the building early on, including adding the portico that looks like an original feature of the building.

“Dan had a pretty good vision,” Bertram said. “He thought about doing more offices. He had a hotel scheme. He had a retirement home scheme.”

Hunter Redman, Terrell’s stepdaughter and also an architect, had drawn up plans for a hotel. She works at Architectural Alliance, the project architect for Washington Inn.

“We bought it with some pretty good ideas,” Bertram said.

“The basic concept was there,” Duettra added.

Terrell in 2016 had noticed Bertram’s downtown interest with Lincoln Place and Marcy Plaza, and Bertram and Duettra’s joint effort with The Lincoln.

“He approached me,” Bertram recalled. “He said, ‘I see you guys have been active downtown. Would you be interested in looking at this?’ In terms of making a decision, it took about 15 seconds.”

It's always suspect when people sit in their armchairs and tell others what they should do. Developers have to assess what they think the public wants or they would not make any profits. The city just likes to order people to do things that don't make economic sense. Just a brief summary of what goes on in this town.

I really wonder what drives these people to keep developing short term rentals (with the exception of Zia Station that will make beaucoup bucks and not serve the neighborhood or the larger public good)....I wonder how many of the overall STR are owned by these developers? IT is too bad this Otero St project is not for long term rentals and providing market rate rents downtown....now that would be diversity in downtown housing!

I agree with your point on long term rentals downtown. But I’m curious why you feel the Zia Station project doesn’t serve the neighborhood or the larger public good. More dense housing along an underutilized public transportation option, includes affordable housing, biker and pedestrian friendly, mixed-use with retail and services for a broader community...all seems good to me.

I don't think of a project with only 10 percent of its housing going toward affordable housing as a great contribution to the community when it will take 6-10 years to get those 39 units. Nor do I think the increased traffic at this hazardous intersection is for the public good or the waiving of height barriers when there were other options that the developer "felt" would be too expensive--no factual data to support this feeling--which as far as I can tell is a feeling of having suckered the public about the razor thin profit margin--from the little that was revealed I think a 60 percent profit margin is something that should make one smile all the way to the bank.

The restrictive and old zoning is what under serves this city. Please stop complaining about lack of affordable housing and then lean on “rules” that were put in place decades ago that directly contribute to the problem.

There are many ways to get affordable housing. The fee in lieu of is not one of them. And in the neighborhood I live in, there are duplexes, multiplexes (some condos), large and small lots with one or more home on them--some as many as 4 on a single family lot....What we don't need it massive apt bldgs that look like everywhere USA and that are barely market rate let alone affordable just so the developer can make another buck