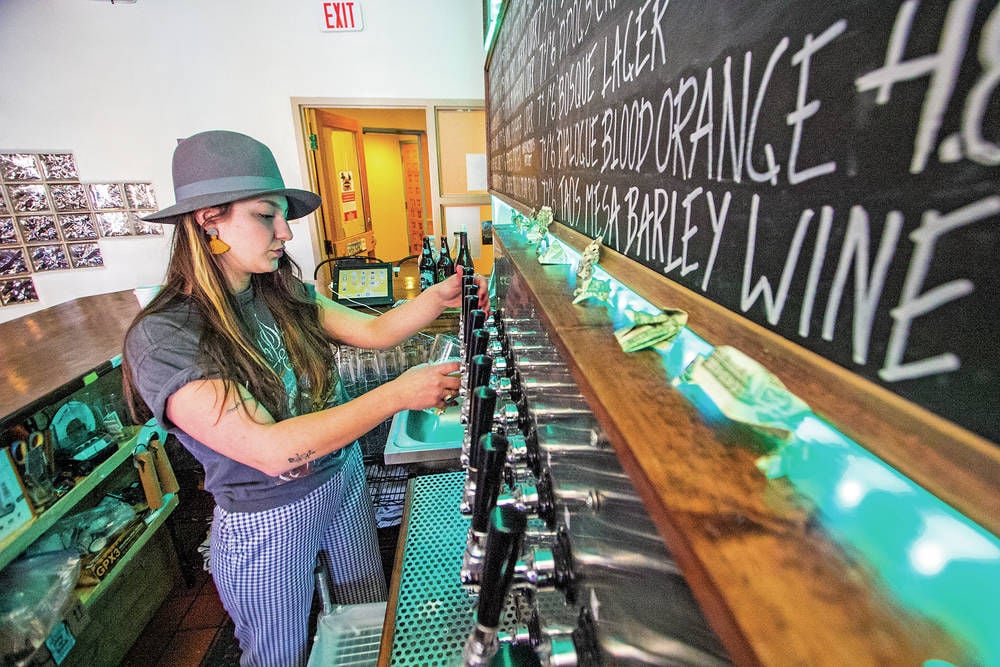 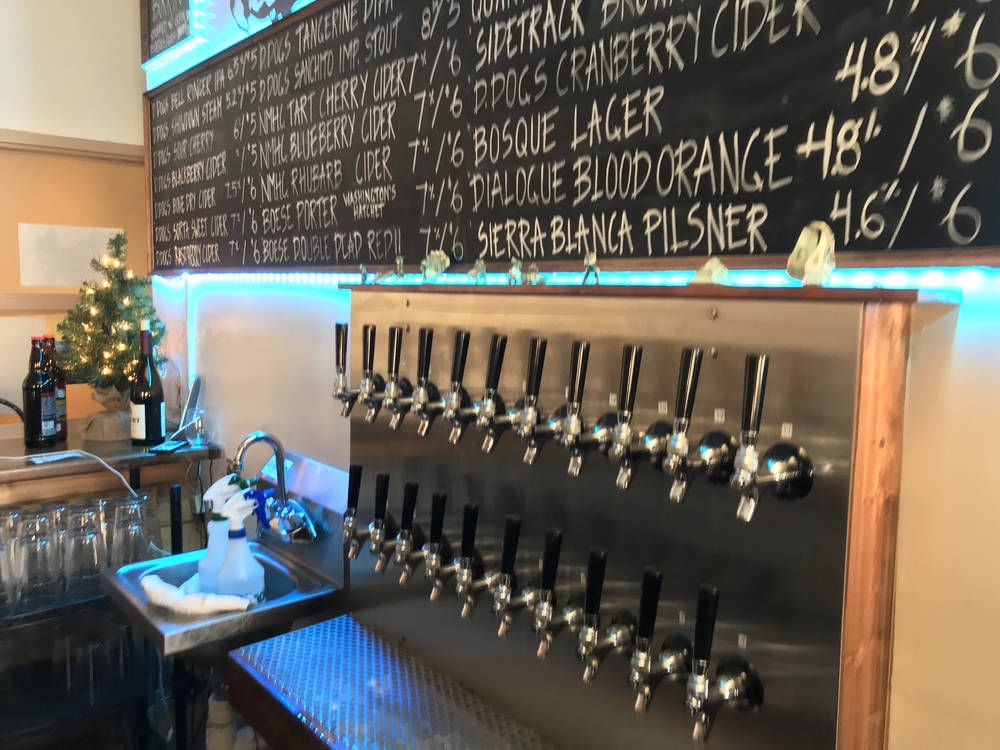 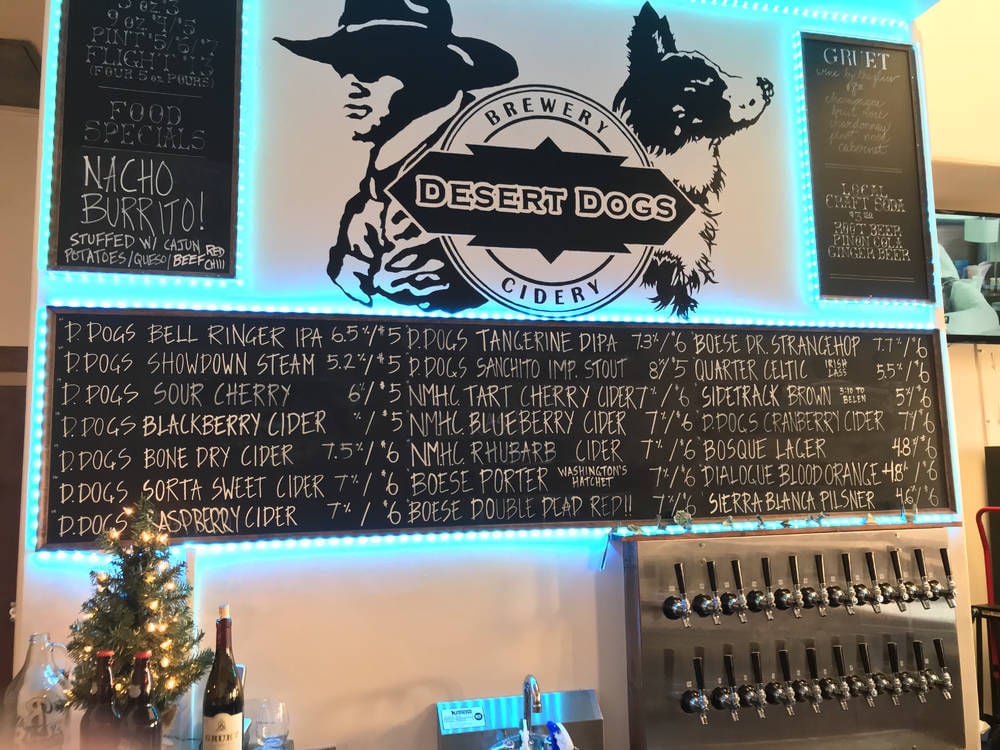 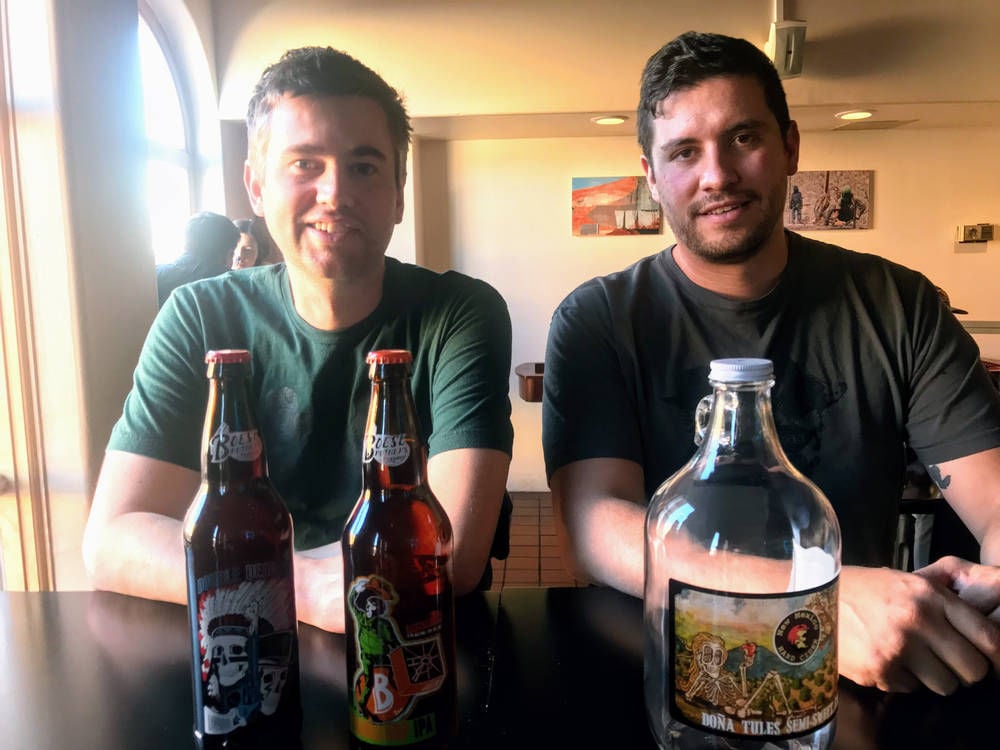 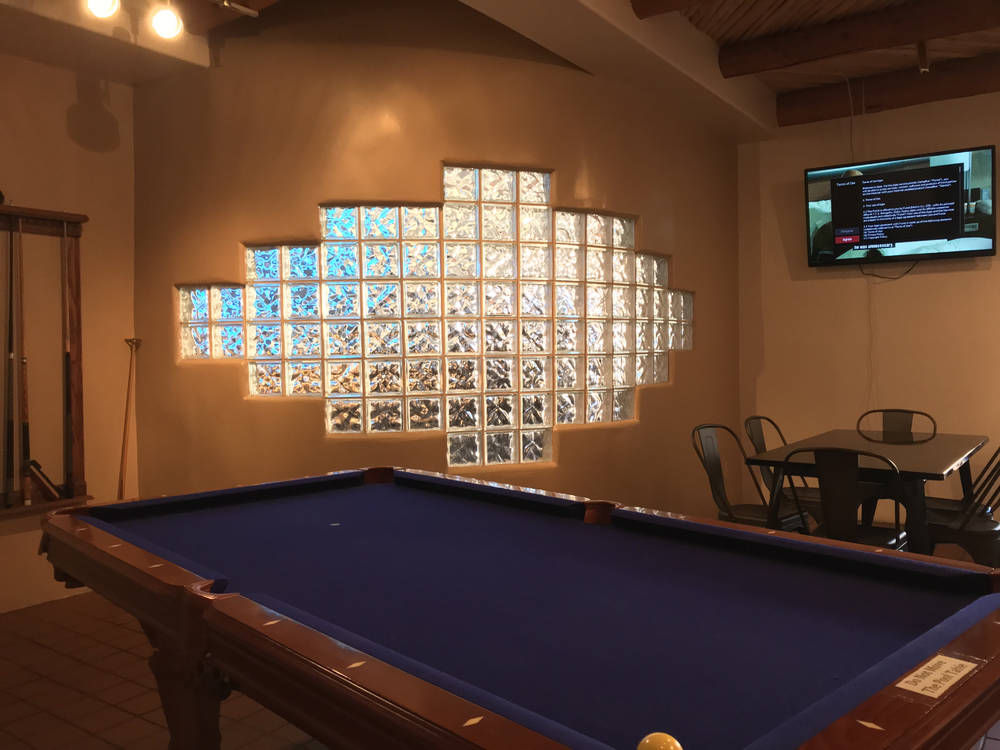 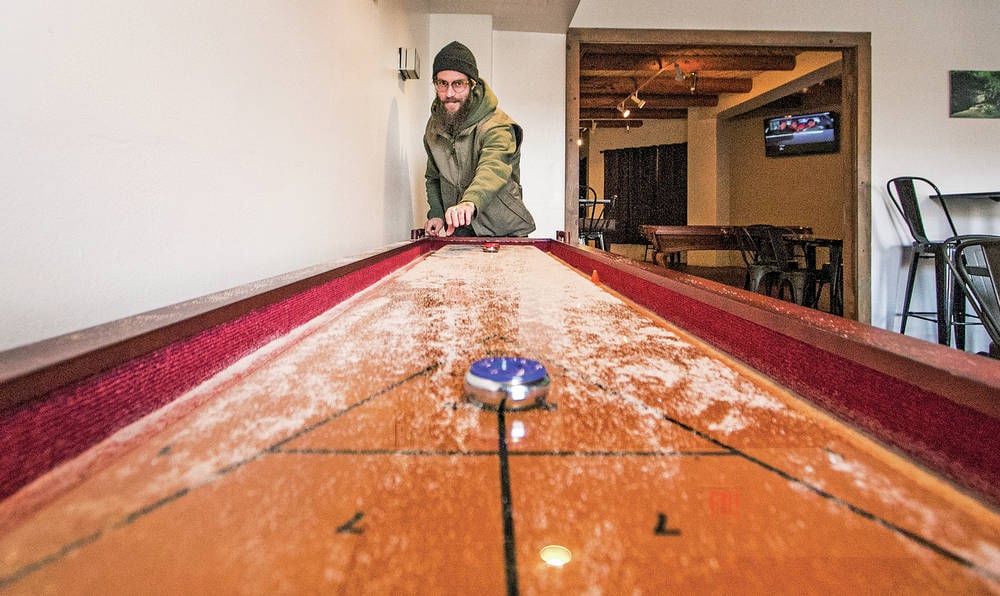 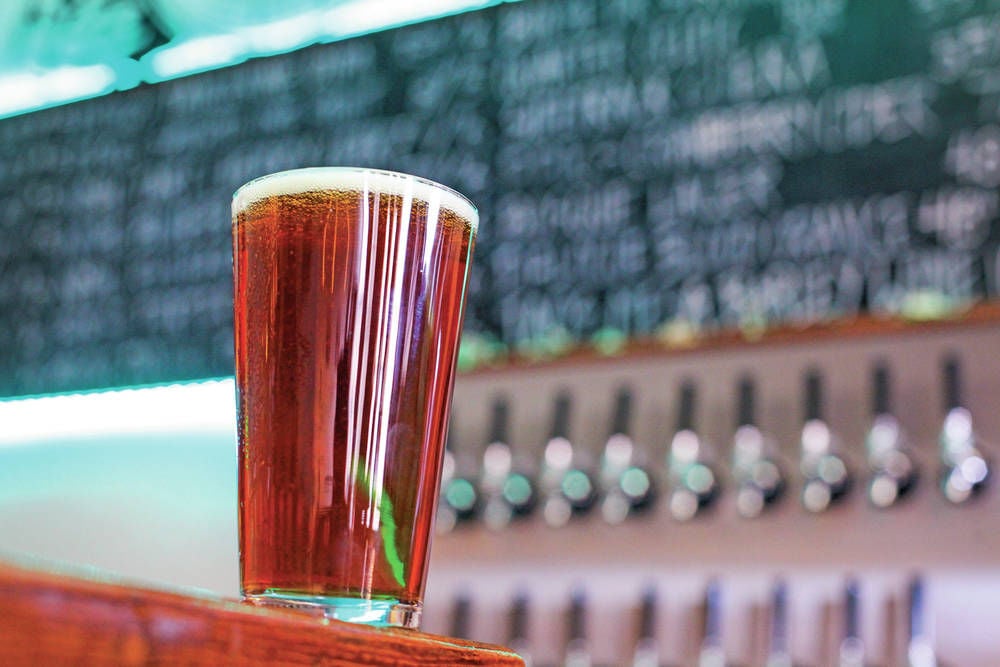 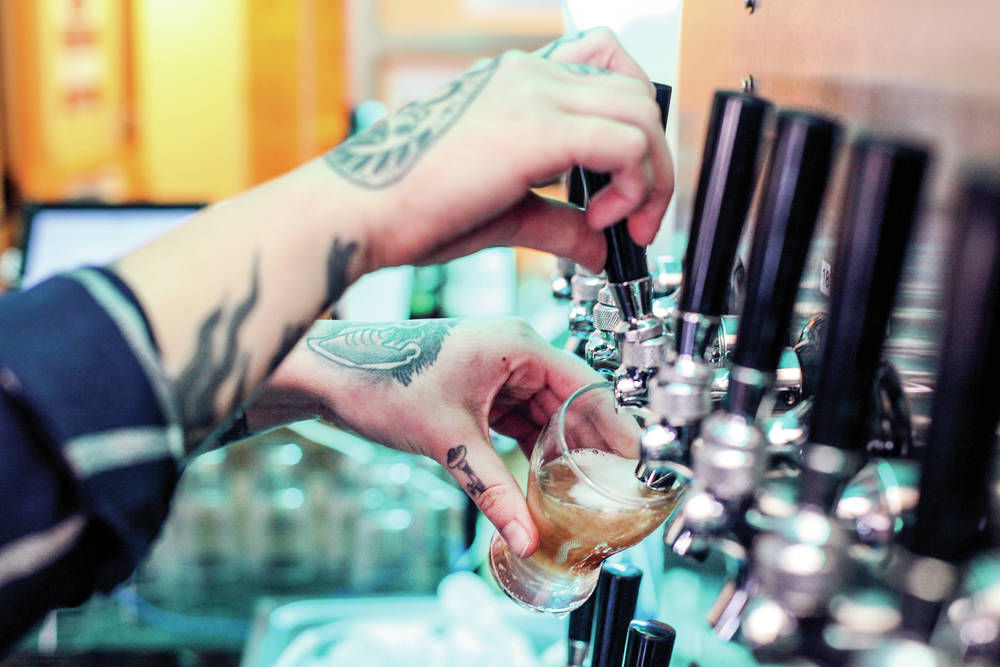 Lindsay Payton pours a miniature glass a beer for a set of flights at Desert Dogs on Monday January 8, 2018. Gabriela Campos/The New Mexican 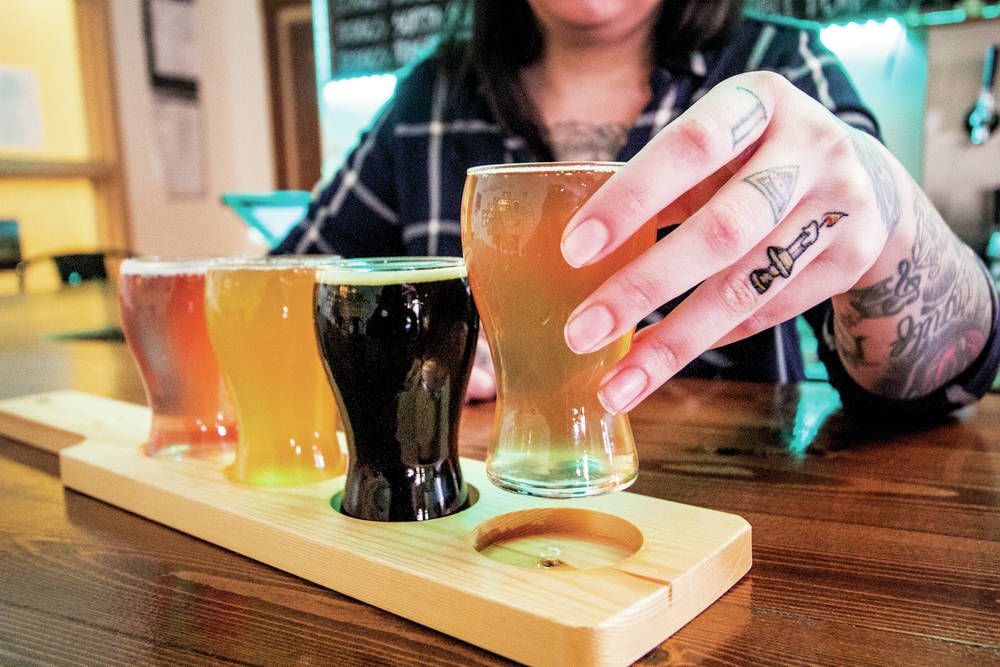 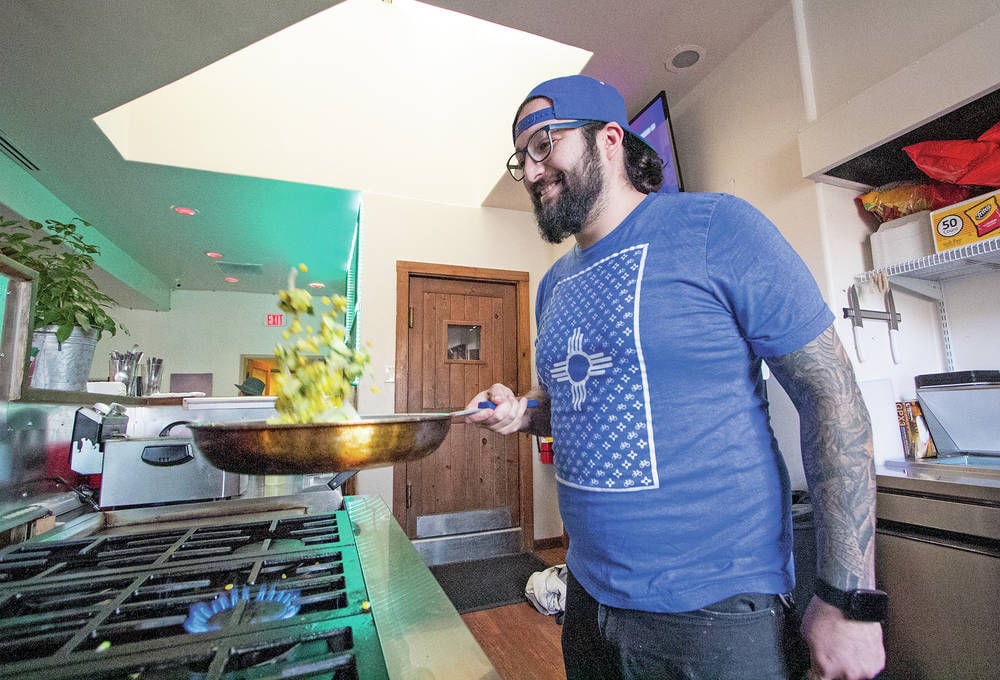 Angelo Chavez cooks up an order of calabacitas at Desert Dogs on Monday January 8, 2018. Desert Dogs has a menu offering meals cooked with all fresh ingredients. Gabriela Campos/The New Mexican

Lindsay Payton pours a miniature glass a beer for a set of flights at Desert Dogs on Monday January 8, 2018. Gabriela Campos/The New Mexican

Angelo Chavez cooks up an order of calabacitas at Desert Dogs on Monday January 8, 2018. Desert Dogs has a menu offering meals cooked with all fresh ingredients. Gabriela Campos/The New Mexican

Desert Dogs Brewery and Cidery is not an easy place to find, and that’s OK with co-owners Sam Boese and Craig Moya.

Located up a short flight of steps off West San Francisco — and then another, longer flight of steps — Desert Dogs sits in familiar territory for many longtime Santa Feans. In its original incarnation, the corner of the building overlooking the busy street on the lower side of The Plaza was the Santa Fe School of Cooking, which moved on to bigger and better things off Johnson Street. Then followed the now defunct Santa Fe Culinary Academy.

“We have two elevators to get up here, too,” Moya laughed. “It’s still a locals’ spot because tourists don’t know we are here yet.”

That’s exactly what the two had in mind when they opened Desert Dogs last fall.

“I would say young Santa Fe locals [are the target audience],” Boese said. “That’s what we kind of went in with as our goal. Obviously, we get a lot of people from out of town during the week, but with the food menu and the hours and atmosphere, we are kind of focused on Santa Fe young people. Locals, essentially, of any age range.”

Two recent early evening visits found the place busy with a crowd mostly under 50, enjoying a wide range of ciders brewed by Moya, who also owns New Mexico Hard Cider, and beers mostly brewed by the Boese Brothers at their Albuquerque brewery.

Throw in a free-to-play game room, plenty of televisions and a small kitchen putting out a small menu of bar foods at relatively inexpensive prices, and Boese and Moya feel they have found a successful combination.

“Product quality is huge,” Boese said. “All the cider and beer under the Desert Dogs brand — people are like, ‘Oh my God, I can’t believe you have been open only three months.’ ”

The pair arrived at the unusual location from divergent paths. Boese and his brother decided to get into the beer brewing business because they, well, liked beer.

“That’s the main reason we got into it,” he said. “We were at my parents’ house standing around a fire kind of drunkenly having a conversation and said we should have a brewery. That was probably seven or eight years ago. That’s when we started to brew at home.”

Home is where it started for Moya, as well. His family had a winery in Villanueva, and his plan, after leaving New Mexico for a while, had been to wholesale wine on a part-time basis in between shifts as a Santa Fe County firefighter.

While the Boese brothers built their Albuquerque brewery, Moya was brewing New Mexico Hard Cider and soon opened his own taproom at the Luna Center. Separately, the partners learned the ropes of owning a business, then had a series of conversations that ended with them deciding to partner on Desert Dogs.

“Our first taprooms were the learning curve,” Moya said. “I’ve had my things and I’m sure they had their stuff. This [Desert Dogs] was like how do we do it? How do we do it so we can come together and open more spots? Since I’m doing cider and they are doing beer, it’s a good partnership, and we bring two very different crowds. This was kind ofthe experiment bar.”

There are future plans brewing between the two, but they are not making any predictions about what or when or where.

“We are talking about that,” Boese said of future growth. “We’re thinking about opening some new Desert Dog places around New Mexico.”

Both agree Albuquerque is reaching a brewery saturation point with more than 40 open right now. Finding space to grow in Santa Fe, which has far fewer breweries, is the biggest thing holding them back.

“In Santa Fe, it’s hard because nothing really big can open in the city because there is not the space,” Moya said. “In the county, maybe.”

Wherever the pair might expand, the business plan will remain simple.

“It’s word of mouth,” Moya said. “When I moved back to Santa Fe seven years ago, no one was here. Now everybody seems to be moving back. It’s just who you hire and who you know. And you have to have a cool atmosphere, good service and good food.”

It also means no advertising (there is not even a website for Desert Dogs) and focusing on getting all the details right and then opening the doors.

“I feel like in Santa Fe you have one shot,” Moya said. “If people talk bad about you, nobody comes in.”

Tying up the courts and other cases against neckwear

Chicken salad for the summer