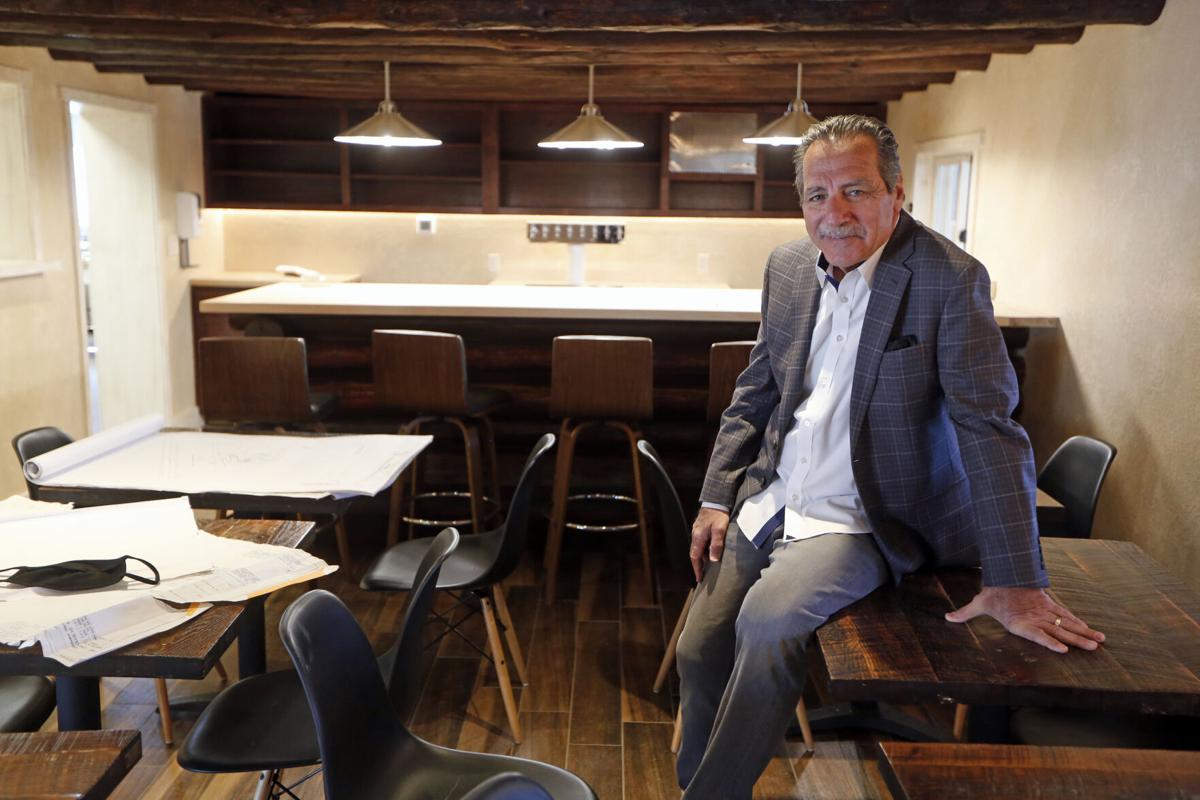 Greg Carey, vice president of Restaurant Operations at NM Fine Dining, in the Bobcat Bite on Thursday. NM Fine Dining plans to reopen the restaurant in May. 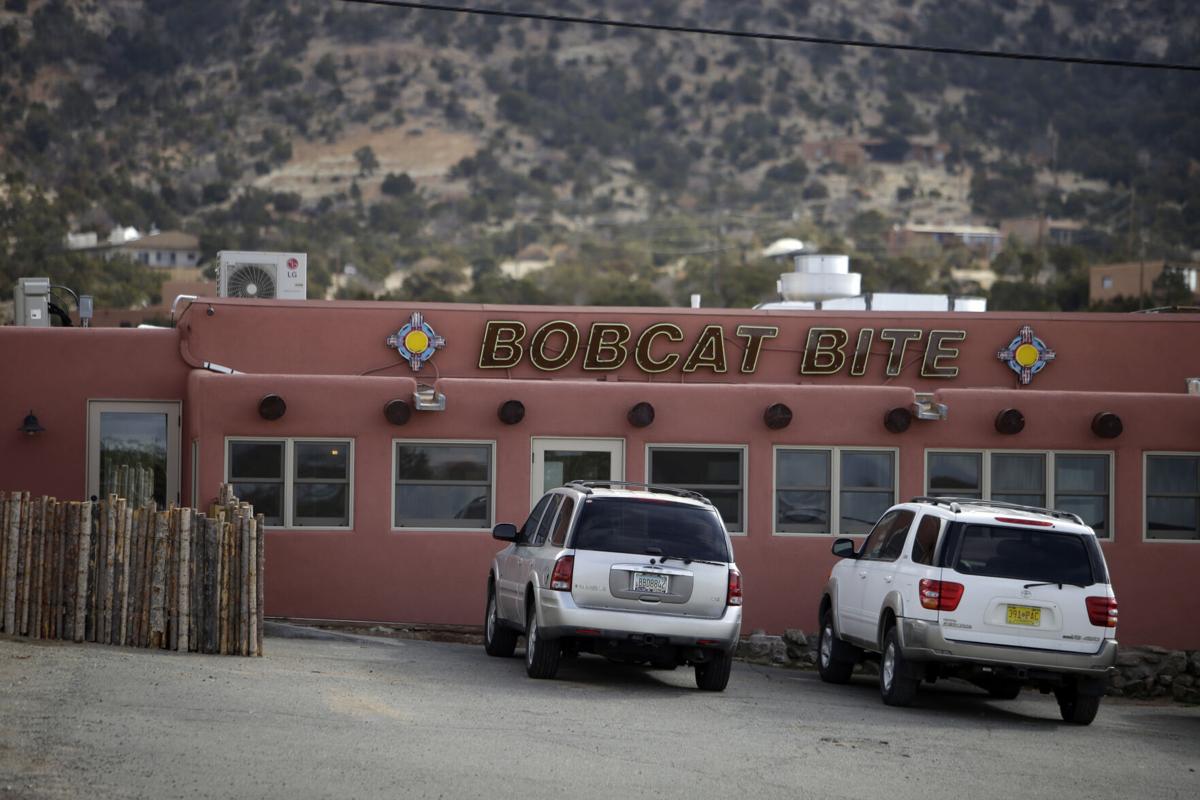 The Bobcat Bite on Old Las Vegas Highway, which closed in 2013 after being in business since 1953, is set to reopen with more capacity.

Greg Carey, vice president of Restaurant Operations at NM Fine Dining, in the Bobcat Bite on Thursday. NM Fine Dining plans to reopen the restaurant in May.

The Bobcat Bite on Old Las Vegas Highway, which closed in 2013 after being in business since 1953, is set to reopen with more capacity.

The Bobcat Bite on Old Las Vegas Highway will reopen in May with the original 1950s grill still in the kitchen and the renowned green chile cheeseburger on the menu.

The Bobcat Bite closed in 2013 after being in business since 1953, including a 2011 visit from Andrew Zimmern for his TV show Bizarre Foods America.

The new incarnation of Bobcat Bite could lead to expanding the brand into other cities across America.

The new Bobcat Bite is under the ownership of NM Fine Dining LLC, the same folks who own Bouche Bistro, Trattoria a Mano and Lucky Goat and previously owned Maize and Jimmy D’s, all in downtown Santa Fe.

Jennifer and Jimmy Day bought the Bobcat Bite property and surrounding 100 acres in 2017, the same year they acquired Maize and started their restaurant group in Santa Fe. They closed Bouche, Trattoria a Mano and Lucky Goat at the start of the pandemic and have never reopened them because the restaurants were too small for 25 percent dining and they opted not to do takeout.

The Days have given no indication when the downtown eateries might reopen, with all of their focus now on Bobcat Bite.

“The only thing I have a comment on is we are going to be opening Bobcat Bite at the beginning of May,” Jennifer Day said. “I have no comment on the other restaurants at this time.”

They pressed ahead with Bobcat Bite, which they have been working on renovating since 2018 and continued through the pandemic, “because it’s not fine dining and because we will have outdoor dining,” she said.

The Days brought in Greg Carey in early January as vice president of restaurant operations at NM Fine Dining. For his last gig, Carey had offices in Monaco and San Antonio, Texas, and a home in Gilbert, Ariz., as senior vice president of operations and development for Steak ‘n Shake. He was responsible for the San Antonio-based company’s expansion to Europe and the Middle East, where, he said, nearly 40 Steak ‘n Shakes are now operating in eight countries.

But COVID-19 closed the international operation in March, and the Days found Carey through a corporate recruiter. Carey did not hesitate to swap Monaco for a single restaurant on the outskirts of Santa Fe.

“It’s a very exciting opportunity,” Carey said. “My career has been about starting concepts and sometimes developing international brands.”

He was with P.F. Chang’s in the early years and was part of the launch of Rainforest Cafe before overseeing international openings in Mexico, London and Paris.

“The appeal to Bobcat Bite is it’s one of those iconic brands that had its day and now we are going to reach into the future,” Carey said.

That future may include Bobcat Bites across the country.

“They have a vision about Bobcat Bite,” Carey said about the Days. “Hopefully to develop a national brand. First things first.”

The first thing is reopening Bobcat Bite after it closed nearly eight years ago. The Days started with a 25-seat mom and pop structure. The new Bobcat Bite will seat 56 inside and 50 outside on a patio that was added.

Carney describes the remodeled interior as “warm and friendly” with low ceilings, wood beams and ceramic tile floors that look like wood.

“I’m making sure the green chile cheeseburger is every bit as good or better than 2011 [when Zimmern ranked it among his five most iconic hamburgers],” Carey said. “The menu is an homage to what Bobcat Bite was and brought into 2021 with updated, stylized appetizers.”

The ribeye steak will also be back.

The Days and Carey are well aware Santa Fe long-timers will compare the new Bobcat Bite to the old Bite.

“Is the food as good as it was 10 years ago?” Carey said. “Yeah, it is. That will bridge whatever doubt there is. Is it more corporate than it used to be? No, it’s not. … It matters very much [what locals think]. It is our desire to appeal to a local audience.”

“The other restaurants are important, but it’s clearly on the back burner,” Carey said. “The challenge with those restaurants is size. They are all small, which is made more challenging by the restrictions. What I decided to do is focus 100 percent of our efforts on Bobcat Bite. Bobcat Bite is the future of NM Fine Dining.”

After learning that the "green house" Days own Bouche and the other named restaurants, including Bobcat Bite, I plan to never patronize them. The way people behave towards their neighbors and community really does matter, and the Days have shown they enjoy wasting the City's time, money and good will. Too bad, too, because I loved the original Bobcat Bite.

Won't be the Bobcat Bite we all know and love, the soul is gone. But maybe a new favorite down the road. At least give them a chance.

Holy cow! This guy, Carey, seems like the real deal. Steak and Shake? P.F. Changs. Wow! It sounds like Bobcat may be a national brand soon. Great news for New Mexico green chili! Bite that, Colorado!

Wow John Cook! Are you the real deal?! LMAO

Leaving out the way the Days "purchased" the original Bobcat Bite makes this a good example of poor reporting.

Bobcat Bite was renowned and well loved due to the hard work and recipes created by Bonnie and John. The new restaurant may have the same name, but it is an imposter. If the new owners are so confident in their own abilities, they should have rebranded. Instead, they are trying to capitalize off of the reputation of Bonnie and John. Seems dishonest.

"They have a vision about Bobcat Bite,” Carey said about the Days. “Hopefully to develop a national brand."

Bobcat Bite wasn't a "brand". It was two people, hand-grinding and cooking excellent burgers in a small, but a wonderful roadside cafe. Because they loved it. Your chain might have the Bobcat name, but it won't have the flavor or the heart.

Santa Fe Bite has the secret to the fantastic burger we all love. I would rather eat at the spacious Santa Fe Bite than the other place that seems so little and crowded. Not a great design for the COVID-era.

Santa Fe Bite for me.

I'd like to see the hamburgers charcoal broiled. The flat grill does not produce a superior product, actually lack luster. I still remember the great burger created at the Zia Diner

That old grill was the key to their burgers. But I know what you mean about the Zia Diner. I really miss it too. It was comfort food at its best. Best. Meatloaf. Ever.

They will Never be the green chili cheeseburger John & Bonnie built and native Santa Fean's will always know the difference!

Locals know what the REAL deal is, and this isn't it... The new "Bobcat Bite" is about as authentic as Santa Fe Style fake adobe walls. Bonnie and John made the Bobcat Bite (Now the Bite) what it is. They were swindled...The Day's are just trying to cash in on the name... But it will fail. Without the heart and soul that Bonnie and John put into that place, you just have another humdrum insignificant burger stand. I for one will NEVER set foot in nor patronize any of the Day's establishments.... I think I will head to the REAL Bite, and get a burger!

When do they slap on the green stucco?

How can you do article on Bobcate Bite without sharing sad tale of how the business and its name had been stolen from beloved last owners.

The Days are arrogant scofflaws who have jerked the city around for years by refusing to abide by rules we all must abide by.

Thanks for listing the Days' other restaurants so we can avoid them.

I had to chuckle at the very idea of this. The old Bite had atmosphere and wasn't pre-planning to expand beyond Santa Fe. They concentrated on cooking, not branding and expanding. As for that 1950s grill: If you don't have the old grill top you've only got a stove. And a neon sign?

I will never step foot in there. Horrible that these people stole the name a building from previous owners.

No mention of how the original location closed and the competition that will come from the restaurant still open that came from that?

Yes, and no mention of Bonnie and John that built the reputation for Bobcat Bite, put their heart and soul into it, then got swindled out of the business. No matter how good the food might be in this era, what gave Bobcat Bite its glory is now gone. But maybe the Texans will not notice, eh?

Im sticking with Bonnie and John at the Santa Fe Bite. They’re the real deal