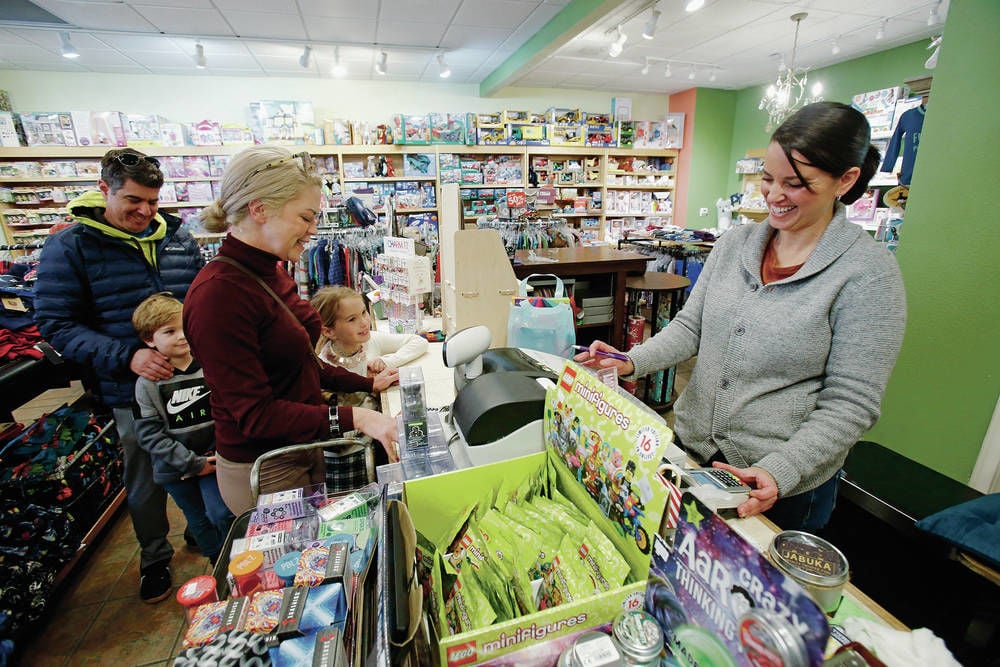 Blythe Gallardo and her daughter, Chloe Gallardo, 8, pay for their toys as Zachary Gallardo, 5, and Mark Gallardo, all of Santa Fe, wait behind them Friday at Toyopolis. The store will be closed on Thanksgiving and opens at 10 a.m. Friday. Luis Sánchez Saturno/The New Mexican 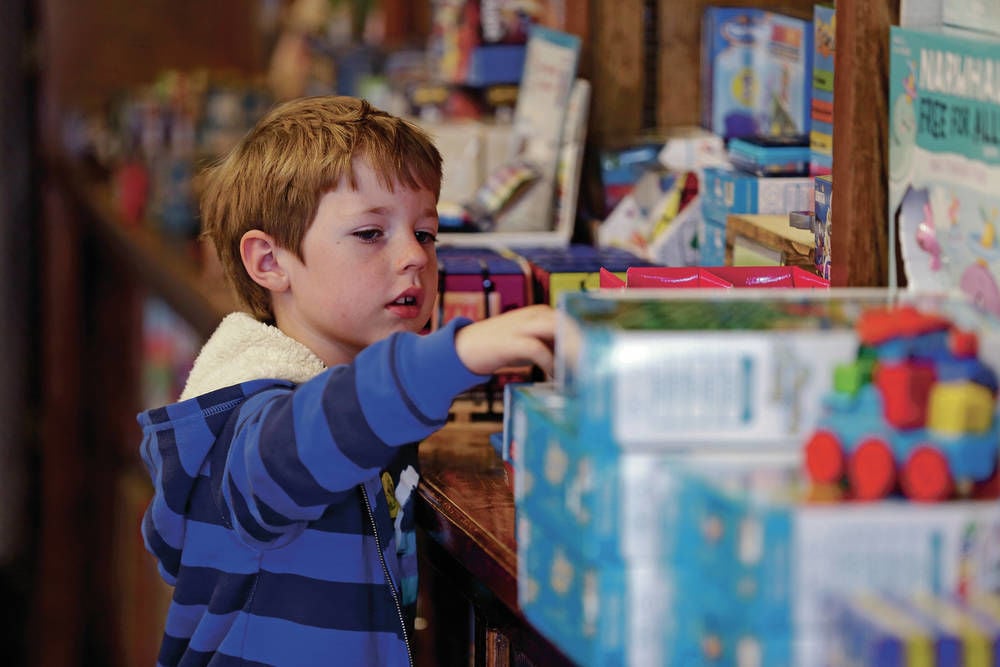 Maverick Allen, 6, of Santa Fe browses through some of the toys Friday at Toyopolis. Luis Sánchez Saturno/The New Mexican 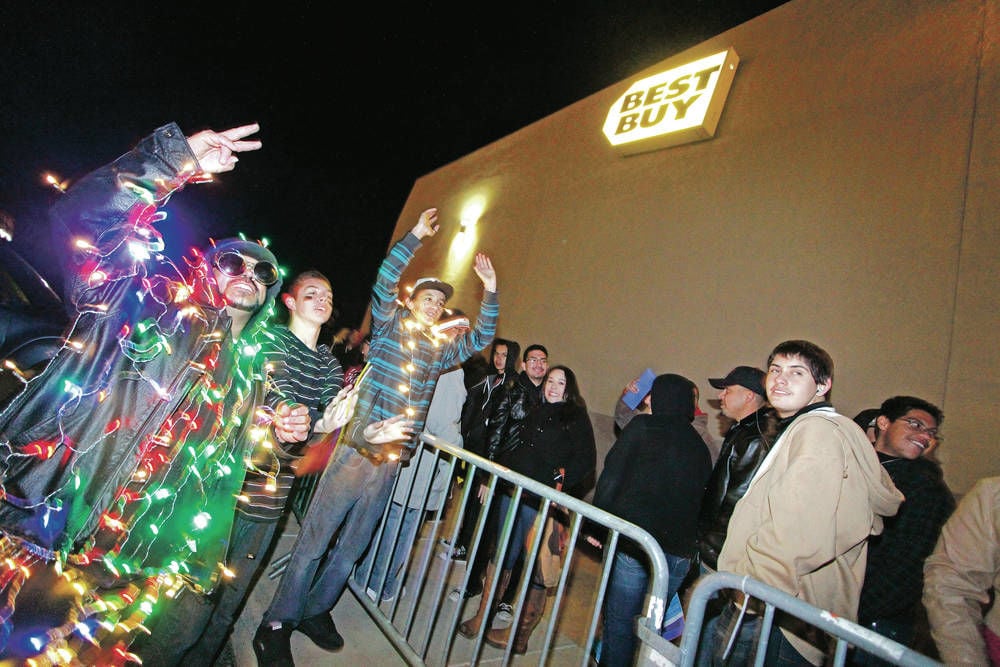 Blythe Gallardo and her daughter, Chloe Gallardo, 8, pay for their toys as Zachary Gallardo, 5, and Mark Gallardo, all of Santa Fe, wait behind them Friday at Toyopolis. The store will be closed on Thanksgiving and opens at 10 a.m. Friday. Luis Sánchez Saturno/The New Mexican

Maverick Allen, 6, of Santa Fe browses through some of the toys Friday at Toyopolis. Luis Sánchez Saturno/The New Mexican

These days, you can get a decent night’s sleep before — or after — heading out for Black Friday bargains.

The retail industry seems to have settled into a pattern, with Thanksgiving Day hours of 5 p.m. to midnight or 1 a.m. and stores reopening again at 6, 7, 8 or 9 a.m. Friday — thus arresting several years of graveyard-shift Black Friday creep.

Walmart has normal hours, which means 24 hours a day at the south-side Supercenter, though in-store Black Friday sales start at 6 p.m. Thanksgiving Day. The Walmart on Cerrillos Road will be open the usual 6 a.m. to midnight Thursday and Friday.

Early Black Friday hours started in the late 2000s with some retailers unlocking doors at 4 or 5 a.m. and Gap Inc. venturing into Thanksgiving in 2008 with its The Gap and Old Navy stores. A few more stores slipped into Thanksgiving in 2009, but more stuck to 3, 4, and 5 a.m. openings through 2010. Midnight came more into play in 2011, and the floodgates for Thanksgiving openings busted wide open from 2012-14.

Toys R Us threw down the Thanksgiving midnight gauntlet in 2009, with Target, Kohl’s, Macy’s and Best Buy opening at midnight in 2011 and many others subsequently joining in.

But now, predawn openings seem to be gone, putting smaller operators on more even footing.

Toyopolis in downtown Santa Fe is old-school — closed on Thanksgiving. It won’t open until 10 a.m. Friday. But the store, which specializes in puzzles, games, toys, Lego products and stuff that doesn’t require a wall plug-in or a screen with wireless access, banks on kids still loving tried-and-true options, owner Jennifer Forman said.

“Kids learn through play using our minds, and using our large motor skills and small motor skills helps with reasoning and problem-solving,” Forman said. “I want to inspire kids that some learning can be fun.”

As for prospects for retailers this year, the International Council of Shopping Centers and National Retail Federation predict an increase in Black Friday sales.

“As to Black Friday’s importance, while the day itself is no longer considered the start of the holiday shopping season that it once was, the period from Thanksgiving Day to Cyber Monday continues to be a significant shopping event for retailers and consumers alike,” said federation spokesman Thomas Jordan.

The federation expects holiday retail sales during November and December to increase between 3.8 percent and 4.2 percent over 2018 to about $730 million.

Christmas used to be a giving season. But now, Black Friday shopping is about the buyer.

The National Retail Federation said Generation Z shoppers (those born since 1997) and millennials (born 1981 to 1996) on average spend $149 on holiday purchases for themselves, more than any other generation.

WalletHub, a personal finance website, has a tip for shoppers principally hunting for discounts on Black Friday.

“The overall average discount for Black Friday is 40 percent,” WalletHub reported. “Consumers should aim for this discount amount or higher to avoid Black-Friday traps.”

Thanksgiving still seems to be a somewhat exclusive shopping day. The National Retail Federation expected 39.6 million shoppers to head out on Turkey Day, in contrast to the 114.6 million anticipated on Black Friday and 66.6 million on Small Business Saturday. Sunday should have only 33.3 million shoppers as no high-profile “Day” is in place, though there will be the third Museum Store Sunday.

Holiday spending is expected to pick up again on Cyber Monday, with 68.7 million people hunting for online bargains.

This will be the last Black Friday for Kmart in Santa Fe, which will shut down Dec. 15 after welcoming generation after generation at the same St. Michael’s Village location since 1976. The closure was announced in September.

Walmart on Cerrillos Road: 6 a.m. to midnight both days