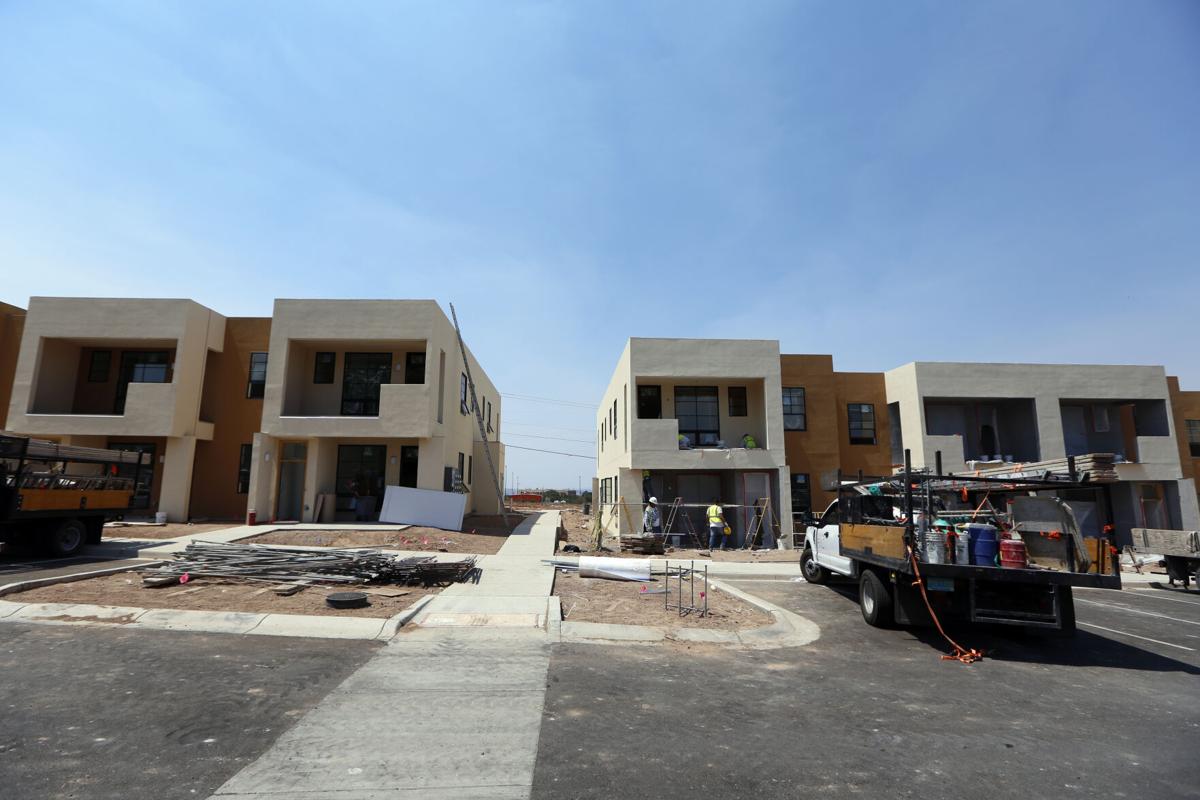 The new apartments at Altitude at Vizcaya last week. Units are expected to be ready for occupancy by Oct. 1. 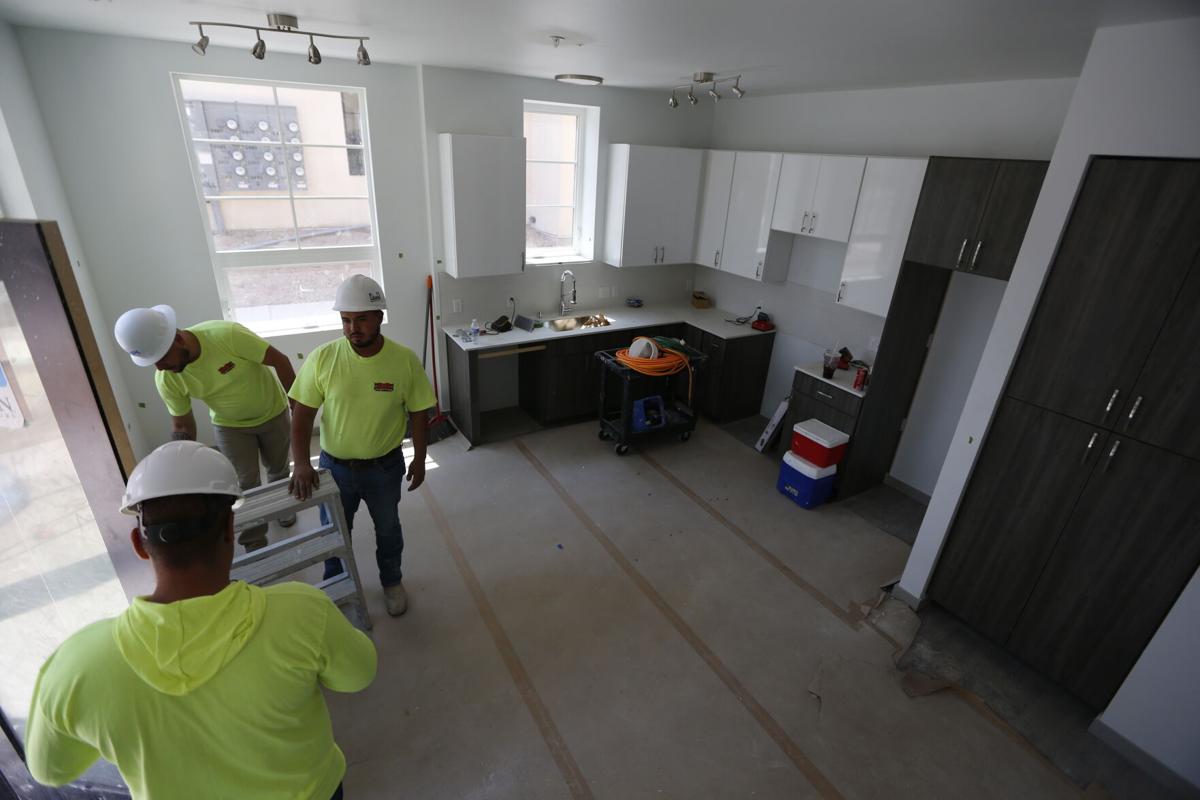 A crew with R&B Drywall Professionals Inc. works in the living room/kitchen area of one of the new apartments at Altitude at Vizcaya last week. 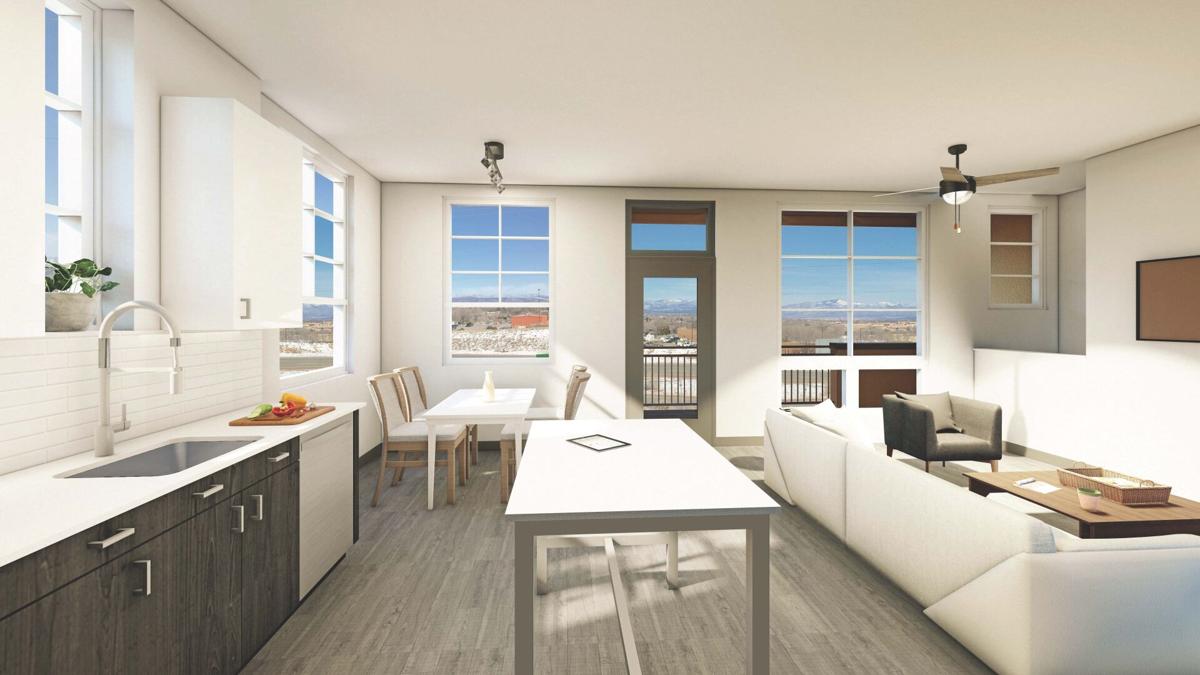 Altitude at Vizcaya will have 10-foot ceilings, tall windows and private balconies. 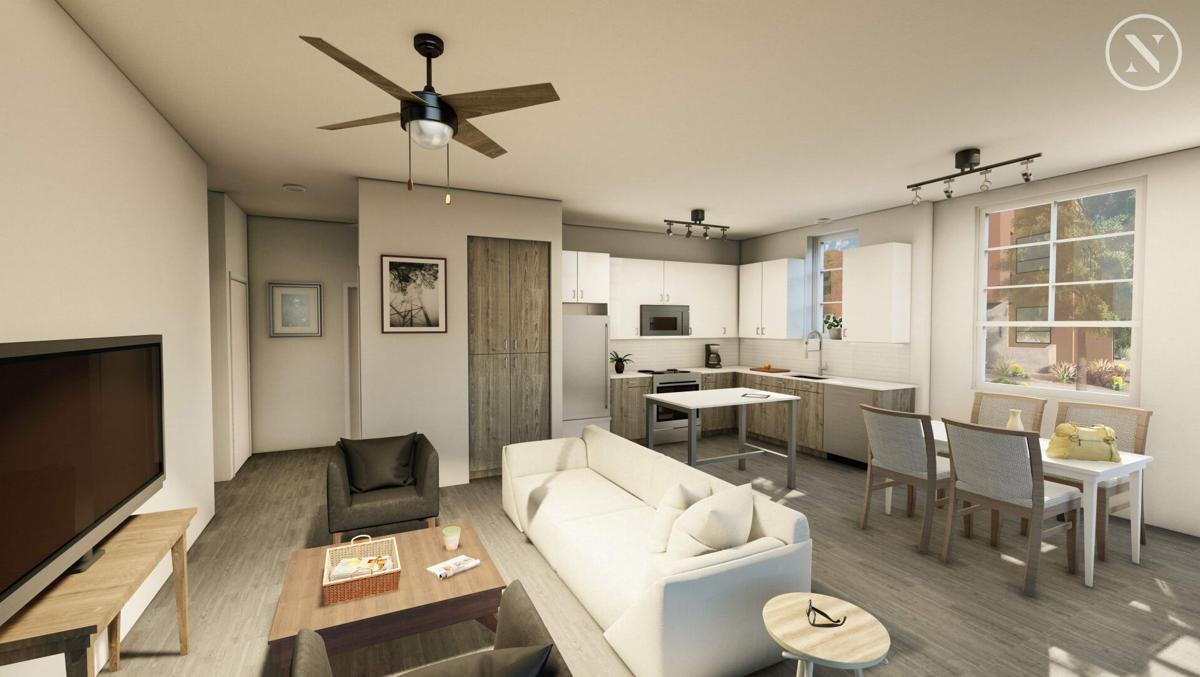 A rendering of an apartment at Altitude at Vizcaya. One-bedroom units at Altitude will rent for $1,500 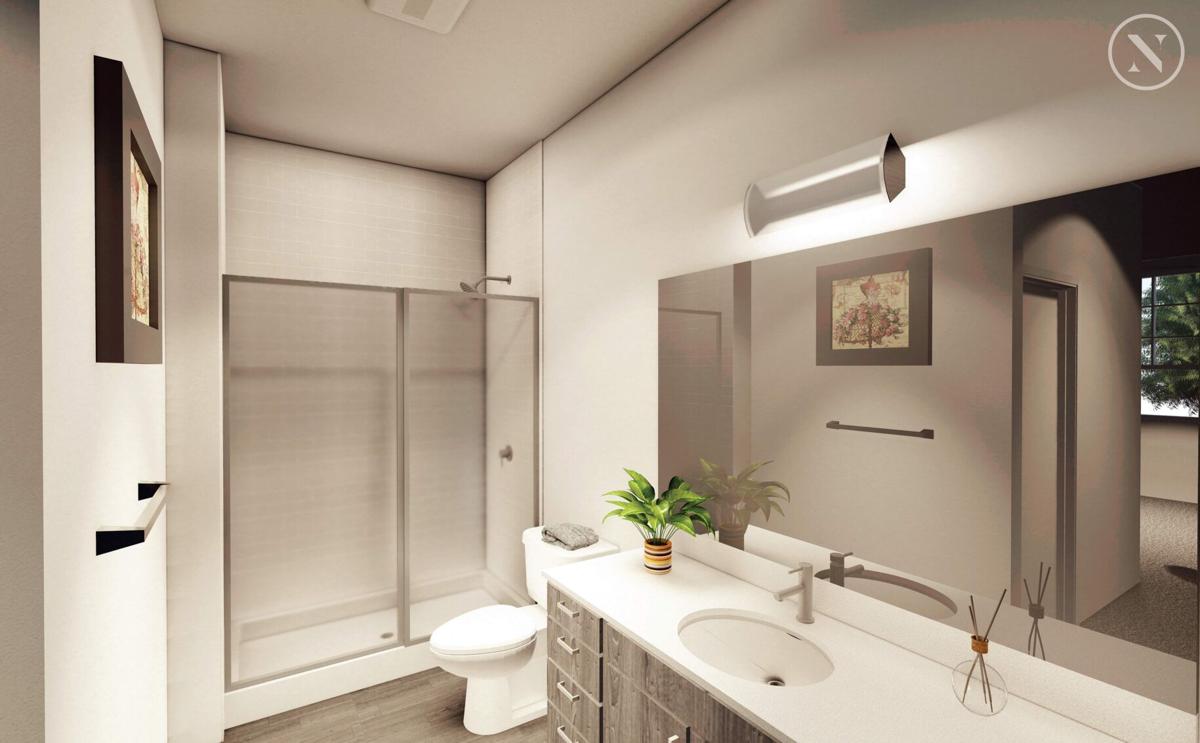 The master bathroom at Altitude at Vizcaya.

The new apartments at Altitude at Vizcaya last week. Units are expected to be ready for occupancy by Oct. 1.

A crew with R&B Drywall Professionals Inc. works in the living room/kitchen area of one of the new apartments at Altitude at Vizcaya last week.

Altitude at Vizcaya will have 10-foot ceilings, tall windows and private balconies.

A rendering of an apartment at Altitude at Vizcaya. One-bedroom units at Altitude will rent for $1,500

The master bathroom at Altitude at Vizcaya.

The newest pair of apartment communities — both just blocks apart on Rodeo Road — are the first to open among 17 multifamily projects that have started construction in Santa Fe since 2018.

Broadstone Rodeo has filled its first 97 units in six buildings since February, with six more buildings still under construction. All 188 units at 1475 Rodeo Road should be complete by October, said Josh Rogers, director of multifamily development at Titan Development, Broadstone’s developer.

Across St. Francis Drive, the 52-unit Altitude at Vizcaya at 543 Rodeo Road expects to move in tenants Oct. 1 after starting construction of the four-building complex in September 2019. Altitude is the third and long-awaited phase of Vizcaya. The first two phases, among the two largest apartment complexes in Santa Fe with 416 combined units, opened in 1985 and 1990 across Sawmill Road from each other.

“Altitude is a little more modern with little larger windows, little higher ceilings and updated interiors,” said Santo Dettore, director of development at Northland Investment Corp., which owns and operates the Vizcaya properties. “It will feel like one community. Altitude will use the Vizcaya entrance. People will notice Altitude is a new building, but it won’t feel out of place.”

Newton, Mass.-based Northland acquired the existing Vizcaya properties in 2016 and in 2018 added the neighboring 2.6 acres where Altitude is being built. Dettore noted a third Vizcaya phase on that property had been under consideration for years.

Northland also acquired the existing Altezza High Desert and Arterra, both in Albuquerque, and The Links at High Desert in Rio Rancho. Altitude at Vizcaya is Northland’s first construction in New Mexico, Dettore said.

“We see a great demand story in Santa Fe,” he said. “Our on-site team keeps telling us the demand is through the roof.”

But the company has no other Santa Fe projects planned at this time.

Another 15 apartment projects have started construction in the past two years that will add 1,304 units to the Santa Fe apartment market — 1,544 units including Altitude and Broadstone. Another 25 apartment projects with 1,716 more units are in various city approval and permitting stages, according to city statistics.

Rogers said many Broadstone residents work in Santa Fe but were commuting from Albuquerque, even from Las Vegas, N.M.

“We’re getting lots of people who have wanted to live in Santa Fe for years but couldn’t find anything,” Rogers said.

Dettore believes Altitude will have the highest apartment ceilings in Santa Fe at 10 feet, with 8-foot-tall windows, granite countertops in the kitchen and bathroom, 42-inch-tall kitchen cabinets and stainless steel appliances.

Decker/Perich/Sabatini of Albuquerque was the architect, the same firm that designed the first two phases of Vizcaya. Bradbury Stamm Construction of Albuquerque is the general contractor.

Northland owns and manages 79 apartment communities in nine states with 50 in Florida and Texas and the rest in New Mexico, Arizona, Colorado, North Carolina, South Carolina, Georgia, Connecticut and Massachusetts.

Broadstone is the first large-scale apartment community to open in Santa Fe since the southwest-side San Isidro Apartments in 2014. The other large-scale apartment projects under construction are the 139-unit Capital Flats on Cordova Road behind Natural Grocers, the 240-unit South Meadows near N.M. 599 and the 189-unit Markana de Santa Fe on Richards Avenue between Home Depot and Walmart. The 240-unit Turquesa Apartments behind Santa Fe Place will begin construction soon.

Titan Development in Albuquerque is co-developing Broadstone with Phoenix-based Alliance Residential Co., which is also the general contractor and is operating Broadstone Rodeo. Whitneybell Perry Architects of Phoenix was the architect. Construction began in June 2018.

Broadstone and Altitude at Vizcaya both paid the city fee in lieu of providing affordable housing, as did nearly all the other larger apartment projects in the works with more than 100 units. The 58-unit Railyard Flats was the first project to open using the in-lieu payment in May 2018.

Developers of the 233-unit Casa Azul on Airport Road are pledging to provide 35 units at affordable prices as determined by U.S. Department of Housing and Urban Development metrics.

looking like the projects for the slave labor housing in all industrial communities.

I wonder if these rates include regular cruise bys by the Mr. Mayor Man's new muffler patrol?

Muffler patrol? What are you even talking about?

So, some folks are working in Santa Fe but commuting from Albuquerque and you think offering a one bedroom for $1,400/month is going to solve that problem? Where the he!! ya all from again?

Of course, we will have the water for all these people, right? Climate change is a hoax, just ask Trump. The Rio Grande is running dry, and the watersheds of our local rivers are threatened by fire, but why should we worry? We can just pump the aquifers dry . . . and then what?

This is not what I would call affordable living at all! My mortgage for a three bedroom, 2 bath home is far less than those 1 bedroom apartments! Sheesh!

I think it's time for local government politics considering regulating rental apartments as the price gouging by the Public Regulation Commission and the State Corporation Commission. Apartment life is not luxury. They were built out of matchstick wood and aluminum siding.