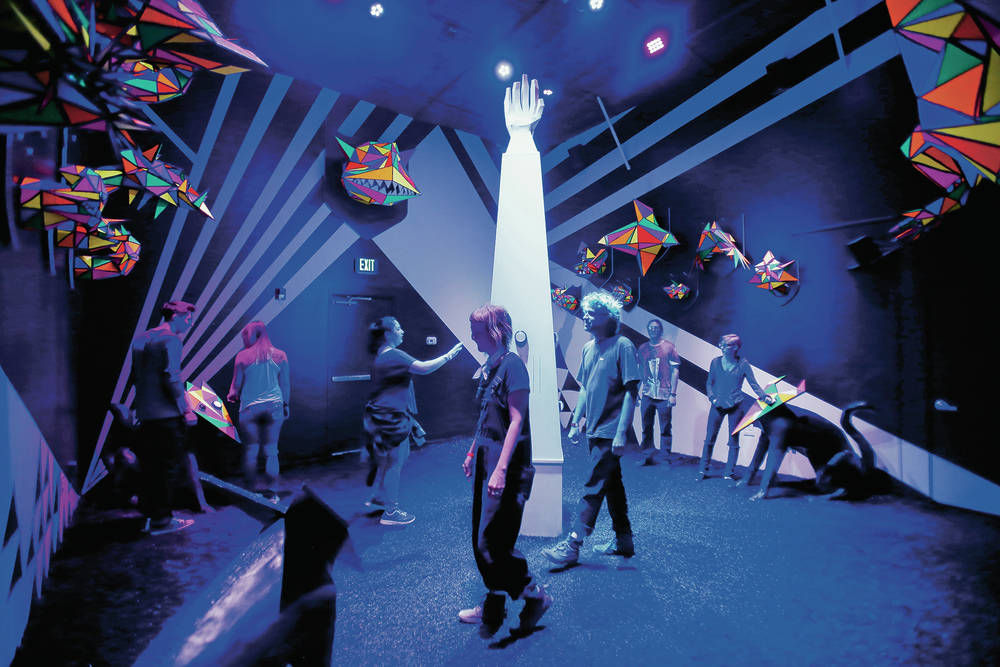 A room designed by doseone is one of the updated spaces inside Meow Wolf’s House of Eternal Return. Luis Sánchez Saturno/The New Mexican 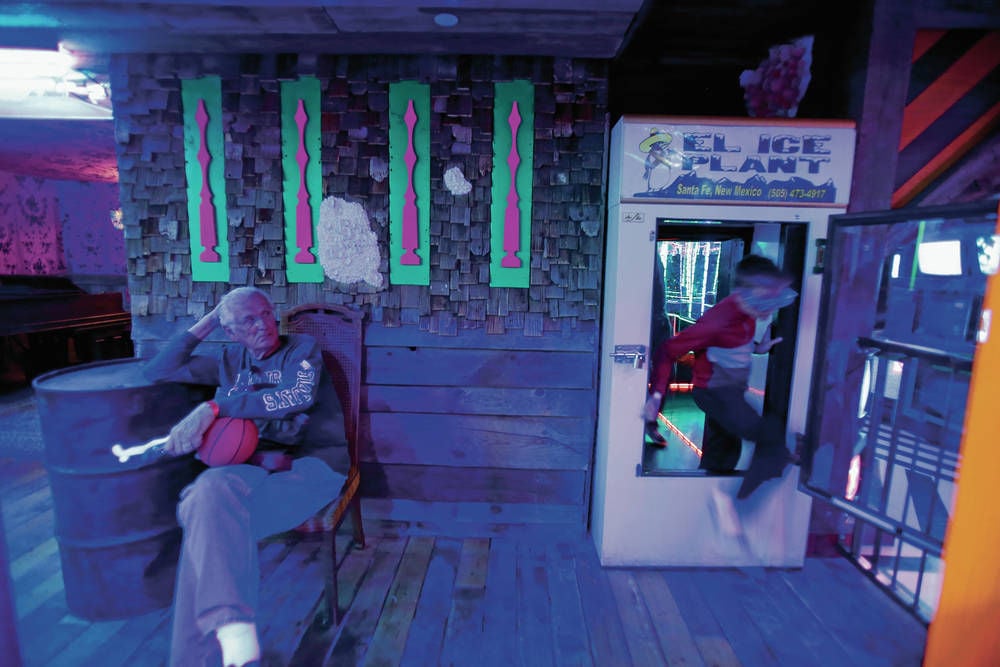 From left, Elija Jackson and Camron Robles, both from Albuquerque, try to find clues about the House of Eternal Return mystery from the Meow Wolf website while visiting the interactive exhibit. Luis Sánchez Saturno/The New Mexican

A room designed by doseone is one of the updated spaces inside Meow Wolf’s House of Eternal Return. Luis Sánchez Saturno/The New Mexican

It was a weekday morning at the Meow Wolf exhibit and a line was already forming outside the former bowling alley owned by Santa Fe fantasy fiction writer George R.R. Martin. Employees were being told there would be six school groups visiting, some 150 students total from Albuquerque Academy, an elementary school, two charter schools and a college.

In other words, it was just a typical day at the House of Eternal Return, which opened a year ago at 1352 Rufina Circle in a space leased from Martin. The theme of the art experience is something has happened inside a mysterious Victorian house.

In late 2015, as fabricators and designers were cobbling together the 35,000-square-foot installation, Vince Kadlubek, Meow Wolf founder and chief executive, wondered whether Santa Fe would accept the project, which incorporates light, sound, story narration and computer technology into a tactile-rich immersive experience.

Kadlubek called it “a high-wire act,” while estimating in a business plan it would draw 100,000 visitors a year, a bit more than the Santa Fe Children’s Museum.

Meow Wolf reached that number in two months and estimates some 400,000 visitors by the end of the week, which marks the one-year anniversary of the project. By comparison, The University of New Mexico men’s basketball team sold 208,500 tickets for its 16-game 2015-16 season.

“Things kind of exploded quickly, and we’re still exploding,” said Amanda Clay, the general manager who is herself a new hire. “Every week we’ve been adding to our payroll.”

Meow Wolf, which has incorporated a separate company for projects outside Santa Fe, now has some 150 employees and is planning to hire human resources and finance directors. “We’re becoming a full-fledged business, so we need all of these things,” said Clay, who relocated to Santa Fe from Chicago.

But that business success is also the biggest challenge for the group, which wants to succeed financially — but on its own terms.

“We want to grow. We want to reach more people, reach more artists, create more things,” Kadlubek said. “We’re in this growth moment; it’s been a real challenge to reconcile business with an arts collective.”

One trade-off for the exhibit, Clay said, has been to limit school groups. The employees noted that groups larger than 50 can detract from the experience. They also figured out that elementary and middle school students could benefit from a debriefing after they walk through the space. Such an experience, while not yet available, would let children ask questions and learn how pieces were created, and it is something Meow Wolf wants to accomplish, as is incorporating more live actors in the space.

With 70 percent of its ticket sales coming from New Mexico residents in 2016, Meow Wolf must tap into repeat visitors. It closed the exhibit for two weeks to update its space and add new features, including a crystal grotto, interactive sounds and a refurbished washing machine that serves as another entryway into the larger exhibit area.

Meow Wolf also expanded the size of its gift shop and its public spaces for eating and drinking to accommodate adults who want a place to sit while their children experience the House of Eternal Return. Meow Wolf also is readying a coloring book and coffee table photo book for sale in the gift shop as it seeks out more merchandise agreements with artists.

The space also hosts an array of events, including dances, instructional workshops in fabrication, and electronic music performances.

Chimera, the educational nonprofit arm of the company, will spend two weeks in Hobbs working with students on the design and installation of an exhibit at the Hobbs Arts Center.

Unlike other arts groups, the core founders of Meow Wolf — Kadlubek and five others — structured the organization like a startup business, selling some $1.5 million in bonds to investors. That initial offering has been repaid or restructured, said Kadlubek, and the group is now aiming to raise $7 million for expansion.

That plan includes expanding to either Austin, Texas, or Denver next — and perhaps both within five years — for another exhibit that might take two years to design, build and open. A decision on where to go next is expected by the end of the year.

But Meow Wolf also is looking for another possible display site in Santa Fe and wants to rent a warehouse in the area that can be used for manufacturing and construction.

“If we want to build our next project in Denver or Austin, we need a place for our team to work on a really big scale,” Kadlubek said. “Santa Fe is our home, our manufacturing center. We’re trying to become a real national or international company that’s headquartered in Santa Fe.”

Special events: On Saturday and Sunday, the exhibit will celebrate its one-year anniversary. The first 1,000 people through the door will receive free cake. There also will be party games and live entertainment.

On Saturday, Princess Nokia, a musical collective out of New York City, will be featured. “Her work is just as interesting thematically, bringing together feminism and metaphysics against a post-Internet cultural landscape,” according to the Meow Wolf website.

In-state visitors accounted for 70 percent of visitors in 2016.

Number of school group visits between April and March: 325