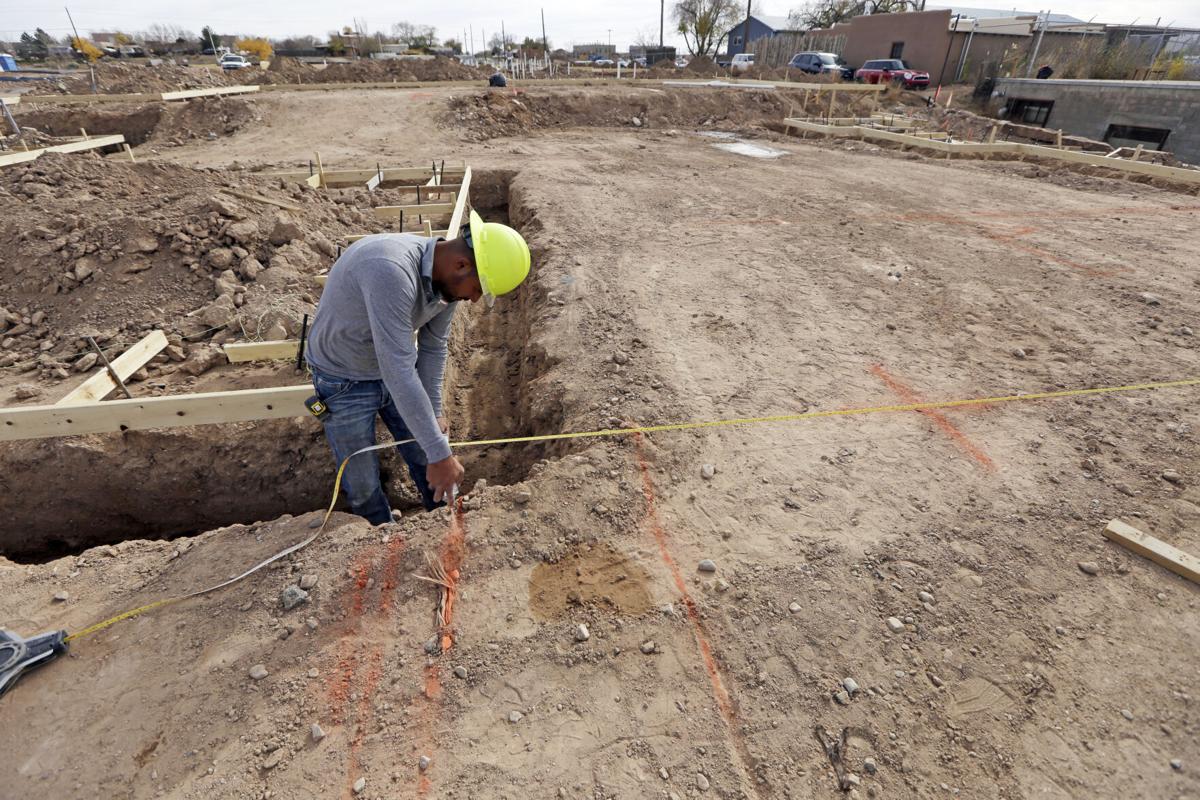 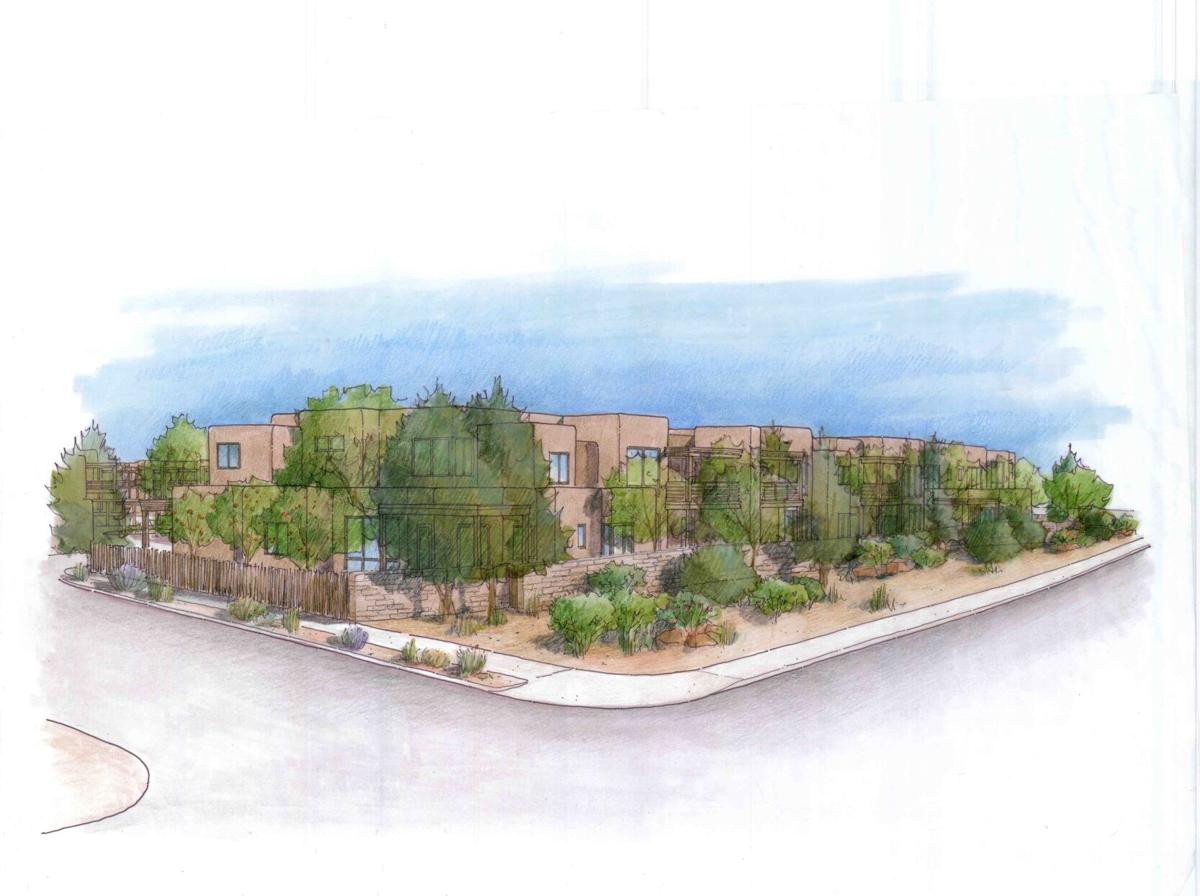 Earth is moving for the 120-unit Acequia Lofts on Aqua Fría Street, six years after the Faust brothers at Santa Fe housing developer Tierra Concepts initially pitched the El Rio apartments at the same location with 399 units on 18 acres west of Frenchy’s Field.

At a 2015 city hearing in the Santa Fe Community Convention Center, a crowd turned out mostly in opposition to what would have been and still would be Santa Fe’s largest apartment complex.

“One thousand people showed up and crushed us,” Kurt Faust recalled. “We finally broke ground [on the smaller Acequia Lofts].”

Eric and Kurt Faust retreated, shelving El Rio, but did not give up on their dream. For the past five years, they scaled the project down to 120 homes on 6 acres, rebranded it Acequia Lofts and amassed the money to fund the project themselves.

Four large apartment projects by different developers have been built in the intervening years, with another handful nearing completion and a few in planning stages. In all, 15 apartment projects with more than 1,000 units are in varying stages from planning to recently occupied, adding 3,300 units to Santa Fe’s housing stock.

“One is money,” Eric Faust said about the time lag between El Rio and breaking ground in May for Acequia Lofts. “El Rio was big enough that we could get investors involved. This one is small enough we could do it ourselves, but we needed time. The city was doing a river corridor plan. We decided to wait until that was done.”

Most of the utilities have been installed in the ground, and foundation work started on the first building. The brothers expect the first residents to be moving in at this time next year.

“We tried to make sure there was ample room,” Eric Faust said. “They don’t feel tight, both in the living area and especially in the portals. We had to increase sizes of the units a little bit to make the numbers work.”

Bedrooms will be carpeted, but the rest of the unit will have linoleum wood floors with solid-surface countertops — “engineered granite.” Each unit has energy recovery ventilation and ceilings of 9½ to 10 feet.

“We are trying to finesse it to put up a lot of solar,” Eric Faust said. “We are shooting for LEED Gold [green building certification].”

“We won’t revisit that until it comes time to start marketing,” Eric Faust said. “It’s not naturally geared for families. They are for single-parent families, retired, young single people or young couples before they have families.”

Acequia Lofts is near the Santa Fe River to the north. The north end of the property will have raised gardening beds for residents. Austrian pine, piñon pine, pagoda trees, emerald sunshine elm and honey locust trees will set Acequia Lofts apart from Agua Fría Street.

Tierra Concepts focuses on custom homes, often the Grand Hacienda winner in the annual Haciendas — A Parade of Homes. In 2001-05, it tackled a different “project”: the Pacheco Park business park, where Tierra Concepts is headquartered. The next project a decade later was apartments, the El Rio project that is now Acequia Lofts, the first apartment project for Tierra Concepts.

“Our original idea was, we all have kids,” Kurt Faust said. “We want them to move back or stay here. We understand how few kids could find a place in Santa Fe. We were targeting the Meow Wolf crowd.”

“We love what we do: build luxury homes,” Eric Faust said. “This was a chance to do something for a different end of the market.”

Just as crucial are addressing zoning, land availability, the expense to build affordable housing and numerous other factors.

“It’s not enough on its own,” Barrio said about the 3,300 new apartments. “We are not going to build ourselves out of the housing crisis. They are helping to address the problem, but we have all this additional work we need to do.”

The wild card in the equation is the new normal sparked by the pandemic of many people realizing they can live anywhere and still keep their jobs. Many of those people in California have discovered Santa Fe.

“People are coming here from the coast and not helping anything,” Barrio said. “The Zoom Boom is driving the market even farther.”

But on the micro level, the Faust brothers believe they are solving a problem for at least 120 tenants.

“Every housing unit we build that is occupied is one more person not traveling from Albuquerque,” Eric Faust said.

So much for our "Small town" feel more people more trouble. Now our city beautiful, is now the city of apartments and lofts.......these builders contribute alot of money to Webber's campaign to build wherever and whenever they want. With the exception of their high-priced neighborhoods.

I don't understand why people moving here while working remotely in another state are considered a problem: If someone moves here, they're paying rent, utilities, et al., they're buying groceries and gas, and they're subject to state tax on their earnings, so they're contributing to the local economy even if their employer is located elsewhere.

Sounds like a nice project, but still nothing anyone working in the service industry or entry level state jobs can afford. Like all the other new apartment complex's in town I wonder who the target tenant is?

should open the Google street view in any browser — if you’re using a different map app, the approximate address is 2720 Agua Fría Street.

Exactly the detail I was looking for. Thank you. Found it on Google maps. As a standard, I think the New Mexican should provide that kind of link and/or street address for all these real estate development articles. 'Near someplace' does not always suffice.

is the traffic study including numerous maps.

It's at Agua Fría Street and Boylan Lane.

It would be helpful when an article is published reagarding apartment or any real estate development, if you could have a link to Google maps pinpointing the location of 'all' property developments.

Or, if you cannot provide a link, please provide the physical address of the property and readers could Google map it for themselves. thanks

Problem being that the roads themselves are being constructed/named which often means no street address to identify. 'West of Frenchy's Field' is as close as you'll get, using GoogleMaps that's roughly across the way from the Agua Fria Rd Allsup's.