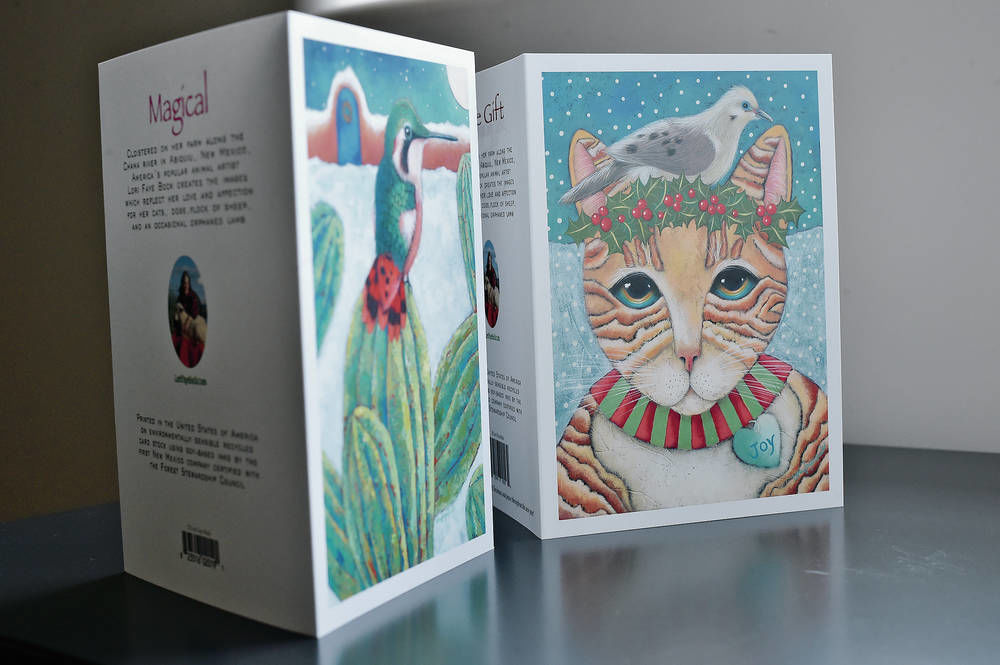 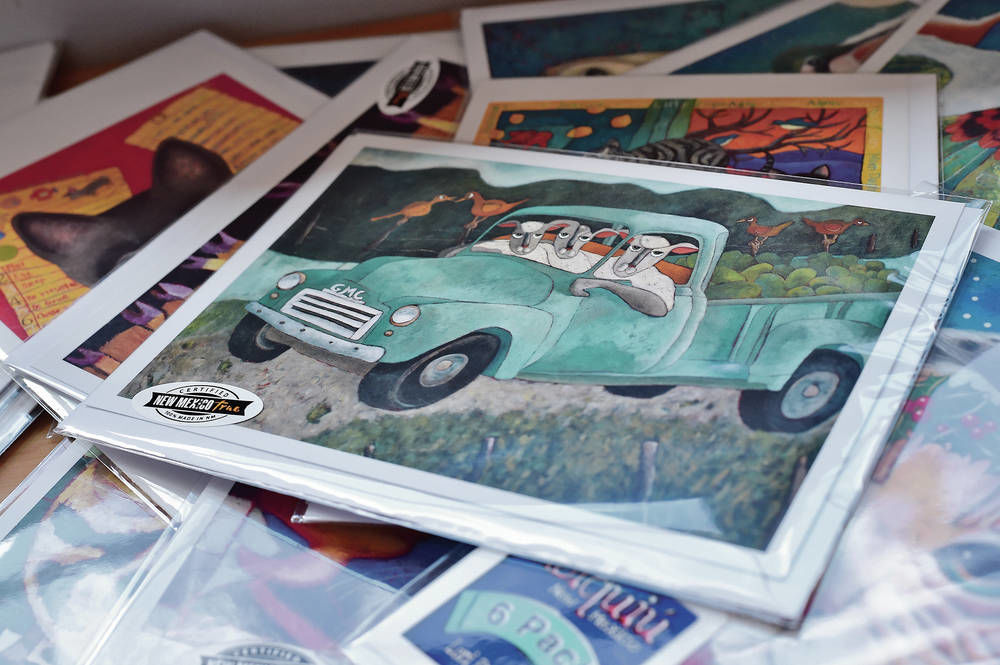 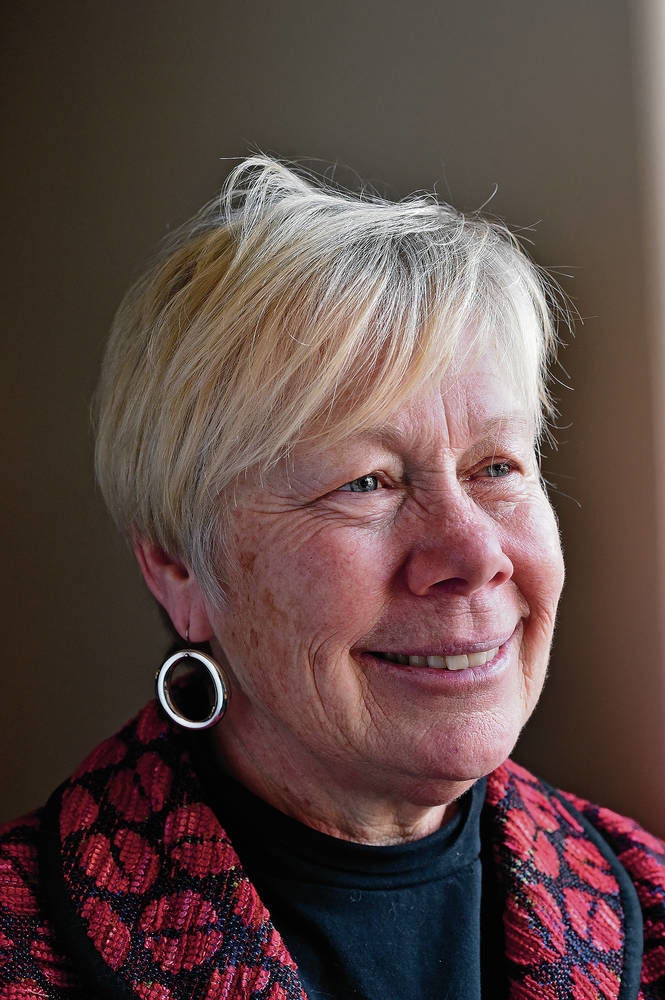 Abiquiu based Artist Lori Faye Bock on Monday October 28, 2019. Recently Bock and her husband Richard quit the Greeting Card Association because of their desire to end the tariff on greeting cards printed in China. Photo by Luke E. Montavon/The New Mexican 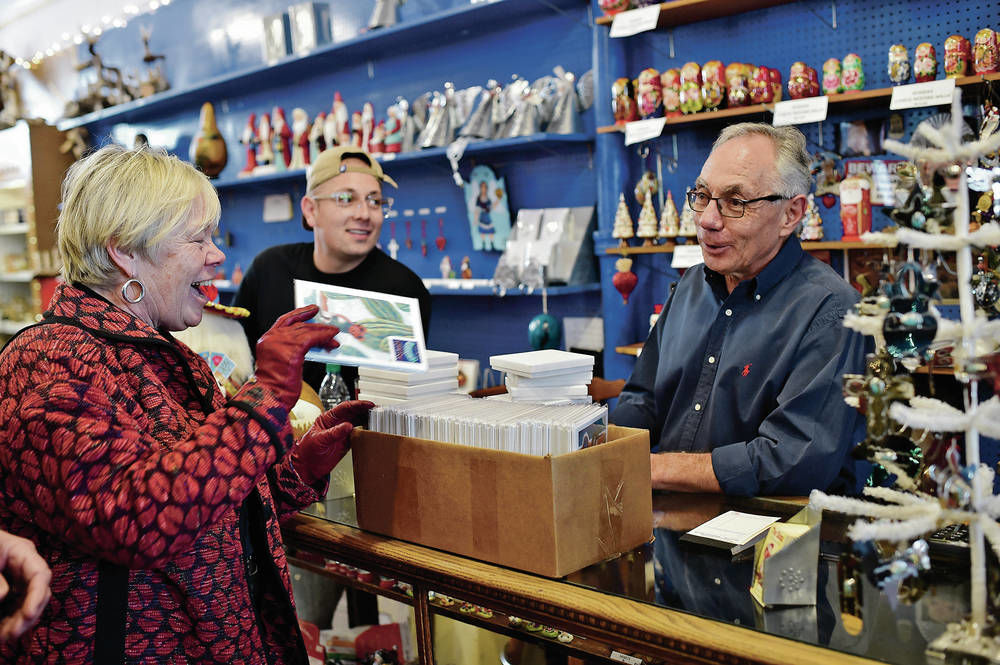 Abiquiu based Artist Lori Faye Bock on Monday October 28, 2019. Recently Bock and her husband Richard quit the Greeting Card Association because of their desire to end the tariff on greeting cards printed in China. Photo by Luke E. Montavon/The New Mexican

By day, Lori Faye Bock is a painter whose work appears in art galleries.

As a sidelight, she paints smaller images specifically for greeting cards.

Every April, it’s Christmas season for Bock and her cards.

She and her husband, Richard Bock, team up at their 8.6-acre Abiquiú farm, where they once had 55 sheep plus dogs, cats, ducks, chickens, goats and geese. Now they are down to dogs and cats.

Lori is the resident artist and Richard does the card layouts, plus marketing, invoices and inserting the cards into the sleeves.

Animal images figure in almost all of Bock’s art, including the Christmas cards. The first featured a sheep, the second a cat, and in stores this year, she is introducing a hummingbird.

The Bocks say they make decisions under the 2-0 vote principle.

“It takes us three to four months to agree on a title,” Richard Bock said. “Maybe 10 days to agree to the six-pack. Nothing happens overnight.”

The six-pack offering of cards is new in stores this year. The six-pack is greeting cards sold in packages of six instead of 12.

Getting the second vote — Lori’s to do Christmas cards — took years.

“Who’s going to buy a Christmas card?” Lori Faye Bock repeated year after year. “It’s one thing to do one painting, but if you print 5,000 or 10,000 cards and nobody likes them, you’ve got a problem.”

Richard won her over with research that indicated 35 percent of card sales are for the holidays.

The first two years, 2016 and 2017, featured a sheep with holiday wreath modeled by their own sheep Patsy. There was a 2-0 vote to name that card “ ’Tis”

A holiday cat followed in 2018 under the moniker “The Gift.” This year is the hummingbird, a card called “Magical.”

“In the last five, six, seven years, it’s a secondary income,” she said of the 66 greeting cards she’s developed. “It’s worth our time.”

As a New Mexico merchant, Richard Bock took particular exception when he received an email from the national Greeting Card Association in May asking for member support in lobbying Congress to drop the tariff on U.S. greeting cards printed in China. The Bocks had only joined the association a year ago. They are not renewing their membership.

“I would not go outside the U.S. with a 10-foot pole,” Richard Bock said about printing Lori’s cards overseas. “It’s about intellectual property. We don’t want somebody stealing our images. I thought [GCA] was there to support American card companies. I thought we were creating in this country and printing in this country. Why would I [support GCA]? I would be cutting the legs out from people who print our cards, so I’m not going to do that. We feel pretty strong to keep things as local as possible.”

Lori Faye Bock took a circuitous route to greeting cards, even painting. She was a ceramicist for 26 years with day jobs as a schoolteacher in her native Detroit and inner city Los Angeles. The Bocks came to Santa Fe in 1989 and the next year moved to Abiquiú.

Neighbors were painters, and that sparked the shift from ceramics to painting for Bock in 1996. Her Medium is acrylic on Baltic birch cradled panels. She quickly landed showings the following year at Waxlander Gallery in Santa Fe, where her work appeared regularly until 2014. She has also had frequent showings at the Wilde Meyer Gallery in Scottsdale and Tucson, Ariz.

Waxlander wanted photographs of Bock paintings that could be handed out to potential customers. The Bocks had to supply 30 photos for each painting. Sometimes photos were left over. Richard Bock had the idea to mount them as greeting cards. The first four cards were produced in 1999. She has produced 66 cards under the Art Note Cards label. Marcy Street Cards carries them all, she said.

They had 5,000 printed of each of the four cards in California and all sold out. Since 2001, all cards have been printed in New Mexico, 16 years at Starline.

One Santa Fe outlet — The Shop: A Christmas Store in downtown Santa Fe — is particularly happy to carry Bock’s Christmas cards. “We like that she is a local artist,” The Shop co-owner Rick Griego said. “That is a big selling point.”.

Griego ordered 144 cat and 144 bird cards and six of the six-pack of the cat cards.

“This is the biggest order he has given us, four times last year,” Richard Bock said.

Lori Faye Bock has all winter and early spring to think of what the new Christmas entry will be next year.

“I like the idea of a raven or a crow,” she said. “Or I may do a raven and owl in conversation. To be determined.”