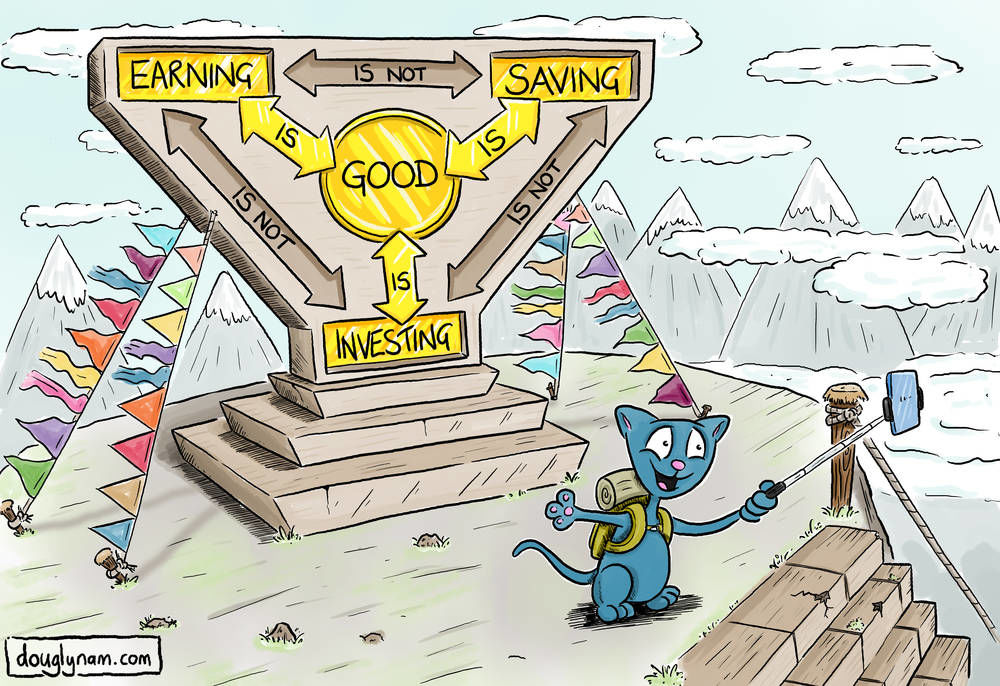 Doug Lynam bases his financial advice on the "holy trinity" of earning, investing and saving.

You didn’t know that some monks need retirement savings? I was a monk in a community of teachers. But you can’t teach forever — even we needed modest retirement accounts.

We didn’t understand what I call the “holy trinity” of finance: Earning, saving and ethically investing.

Like most people, we didn’t know that one must succeed at all three steps to retire comfortably. Though monks earned salaries, like many families we struggled to save – and we viewed investing as something spawned in hell.

If everyone in your family hates dealing with money, you probably won’t have very much of it. Believing that money is the root of all evil, we took the vow of poverty a little too seriously.

You might guess how that worked out: It didn’t. The monastery eventually went bankrupt.

This problem is not limited to monks or teachers.

My father was a CEO of a chemical company, but he’s now living off Social Security because he didn’t save and invest wisely.

What I learned from him is that even if you’re a high earner, but don’t save and invest, you’ll end up broke.

The good news is that if this same family had invested 15 percent per year in a balanced portfolio of index funds for the past 30 years, it would have a staggering $1,162,939. The key is compound growth over many years. But to make this work, you must start early. When it comes to investing, time is literally money.

My favorite illustration of this truth is a client who is a cafeteria worker earning $30,000 a year. She invests religiously, and in her late 30s, already has a substantial retirement balance and is on track to hit $1 million by the time she retires. She practices humility and prudence with her money, as opposed to recklessly spending it like my dad or rejecting it like my monastic brothers.

“But the market is going to crash!”

I hear this all the time, and it stops people from investing.

Of course the market is going to crash, which is why you need a balanced portfolio and must take a buy-and-hold approach. The best thing to do when the market does periodically crash is to buy more or hold on until it recovers — as it always has.

It’s important to remember there is no 20-year period in which the market has had a negative return. Though we can’t foresee what stocks will do in any given year, if you invest for the long-term, your market risk drops radically.

By contrast, not investing at all is a guaranteed path to failure.

One fellow monk refused to invest his meager retirement savings and parked everything in a “safe” but low-return annuity product. After 30 years, he had saved about $145,000. When the market dropped by 36 percent in 2008, he proclaimed victory. He bragged about how wise his strategy was.

What he failed to grasp was that if he’d invested the same amount, over the same time frame, in a balanced portfolio, his account value would have grown to about $400,000 by early 2008. Even at the worst point in the ensuing financial crisis, he would still have had roughly twice as much money as he’d saved in his annuity.

To sum up: Just earning money won’t build a secure financial future. Just saving won’t do it, either. You must earn, save, and invest wisely. That’s the holy trinity of finance.

Doug Lynam is a partner at LongView Asset Management in Santa Fe and a former monk. He is the author of “From Monk to Money Manager: A Former Monk’s Financial Guide to Becoming A Little Bit Wealthy – And Why That’s Okay”