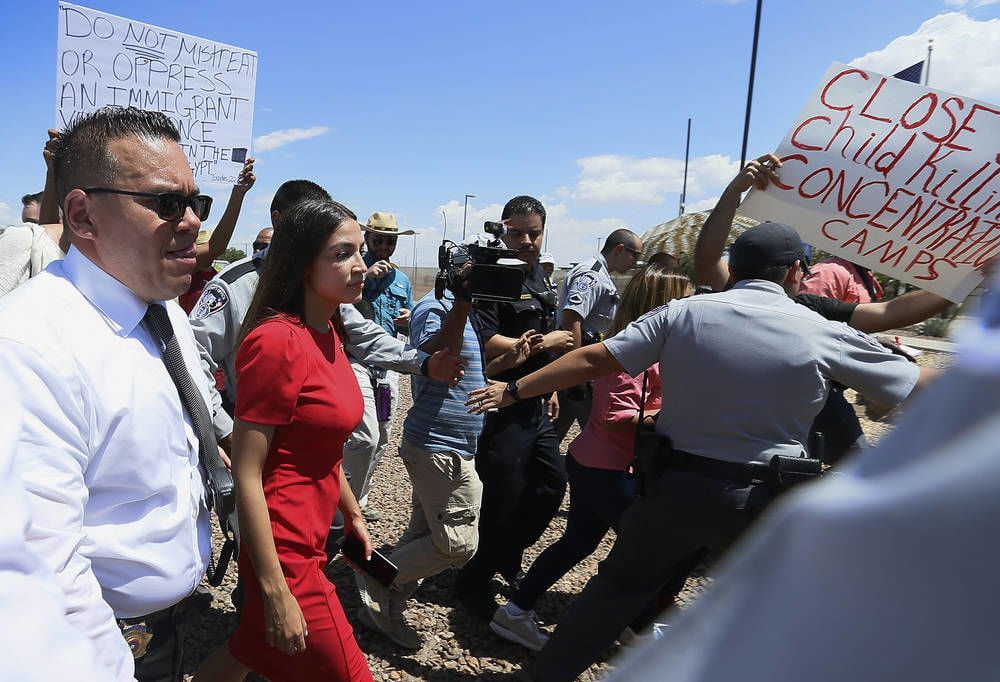 U.S. Rep. Alexandria Ocasio-Cortez, D-N.Y., is escorted back to her vehicle Monday after speaking at the Border Patrol station in Clint, Texas, about what she saw at area border facilities. Briana Sanchez/El Paso Times via AP 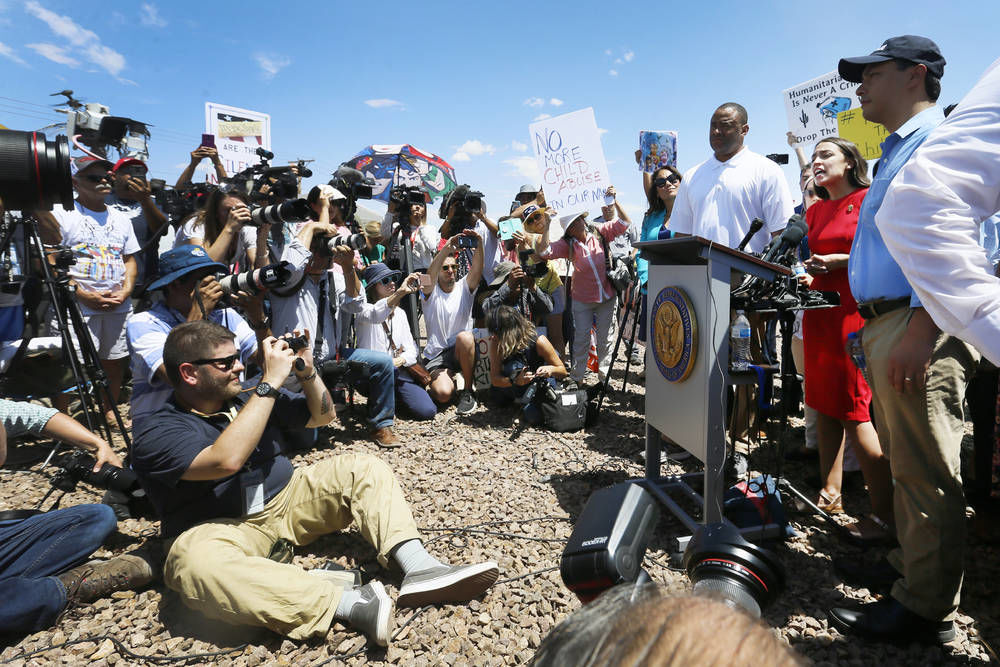 U.S. Rep. Alexandria Ocasio-Cortez, D-New York, talks about what she saw on her tour of area border facilities Monday, July 1, at the Border Patrol station in Clint. Ocasio-Cortez was attempting to talk over the protesters. (Briana Sanchez / El Paso Times via AP)

U.S. Rep. Alexandria Ocasio-Cortez, D-N.Y., is escorted back to her vehicle Monday after speaking at the Border Patrol station in Clint, Texas, about what she saw at area border facilities. Briana Sanchez/El Paso Times via AP

U.S. Rep. Alexandria Ocasio-Cortez, D-New York, talks about what she saw on her tour of area border facilities Monday, July 1, at the Border Patrol station in Clint. Ocasio-Cortez was attempting to talk over the protesters. (Briana Sanchez / El Paso Times via AP)

CLINT, Texas — The head of the U.S. Border Patrol on Monday slammed as “completely inappropriate” sexually explicit posts about U.S. Rep. Alexandria Ocasio-Cortez and comments questioning the authenticity of a photo of a drowned man and his young daughter in a secret Facebook group for agents.

The existence of the group was reported by ProPublica as roughly a dozen members of the Congressional Hispanic Caucus, including Democrats Ocasio-Cortez of New York and Veronica Escobar of Texas, toured border facilities where attorneys said they had found migrant children living in fetid, filthy conditions.

Some of the posts were graphic, doctored images of Ocasio-Cortez, including one that shows a smiling President Donald Trump forcing her head toward his crotch. Other comments refer to Ocasio-Cortez and Escobar as “hoes,” and one member encouraged agents to throw a “burrito at these bitches.”

Ocasio-Cortez said she wasn’t surprised by the posts, especially after the treatment of migrants she said she witnessed at the facility.

“It’s just indicative of the violent culture that we saw,” she said.

The revelation about the Facebook posts only added to the vitriolic atmosphere surrounding immigration and the treatment of tens of thousands of migrants who have crossed the border, vastly straining the system that has been struggling to keep up amid Trump’s hardline rhetoric.

The Democrats delivered an emotional denunciation of what they saw inside the border facilities as protesters shouted that they didn’t believe them.

“When we went into the cell, it was clear that the water was not running … in fact, one of the women said that she was told by an agent to drink from the toilet,” said Rep. Joaquin Castro, a Democrat from Texas and twin brother of presidential candidate Julián Castro.

The Texas visit came the same day as Trump signed a $4.6 billion emergency aid package that Congress passed on Friday. The Democratic-led House had pushed for more restrictions on how the money could be used and stricter oversight, but ultimately lost the battle.

Trump said he hadn’t seen the postings but claimed Border Patrol agents were not happy with Congress.

“So the Border Patrol, they’re patriots, they’re great people. They love our country. They know who’s coming in,” said Trump.

Lawmakers who toured the facilities shared their experiences widely on social media. Rep. Joe Kennedy of Massachusetts called them “jail-like. No way to keep a child or innocent human being.” The head of the Congressional Asian Pacific American Caucus, California Rep. Judy Chu said “what we saw was appalling and disgusting.”

Castro said there would likely be a Congressional investigation into the Facebook posts.

Billed as “fun, serious and just work related,” the group of about 9,500 members of current and former Border Patrol employees states: “We are family, first and foremost,” according to ProPublica.

Another thread involved the image published last week by the Associated Press of a migrant father and his toddler, drowned on the banks of the Rio Grande. One commenter suggested the image was doctored because the bodies were too clean.

“We’ve all seen the dems and liberal parties do some pretty sick things,” the comment read.

They marked a sharp contrast to accounts of Border Patrol officers spending their own money on food for migrants in their care, or rescuing migrants from the Rio Grande, or from a bombing range in Arizona. U.S. Customs and Border Protection, the parent agency of Border Patrol, said an investigation into “disturbing social media activity” was underway.

“These posts are completely inappropriate and contrary to the honor and integrity I see — and expect — from our agents day in and day out,” Border Patrol chief Carla Provost said. “Any employees found to have violated our standards of conduct will be held accountable.”

Ocasio-Cortez raised hackles last month when she tweeted: “This administration has established concentration camps on the southern border of the United States for immigrants, where they are being brutalized with dehumanizing conditions and dying.”

Her tweet set off a firestorm of criticism from GOP lawmakers and others over her use of “concentration camps,” with some saying she was unfairly comparing the southern border to the Holocaust. The Border Patrol’s union, while condemning the Facebook posts, also took a swipe at her.

“Whether one agrees with the politics of Rep. Ocasio-Cortez and Rep. Escobar, they both must be treated with dignity and respect,” according to a statement from the union. “Similarly, when Rep. Ocasio-Cortez refers to CBP facilities as concentration camps … she does nothing to improve the political discourse.”