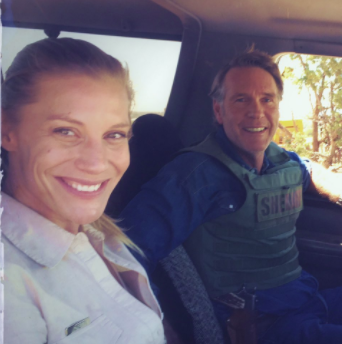 Don't cry because it's over.

Cry because it happened and you never got to meet Katee Sackhoff.

This is like a graduation day and a funeral and a retirement party and the last day of summer camp all in one.

As filming concludes, the cast and crew are saying their goodbyes to their adopted home of six years on social media, and El Mitotero is practically Tom Hanks-in-Castaway-blubbering-after-Wilson-as-he-floats-away over here.

The analogy is not perfect, no, but El Mitotero is sad, and a beloved thing is floating away forever, is the point. Get it? Sheesh. This is a tender moment. Be nice.

OK, how's this: It's like the scene at the end of Wizard of Oz where Dorothy stands in the balloon basket and goes around saying goodbye to all of her friends. I'll miss you most of all, Standing Bear.

My last day. There are jobs that enrich you, teach you, remind you of the humanity in our Art. This is one of them. Thank you. #Longmire pic.twitter.com/zf7Z4N6yrt

And here is the aforementioned Sackhoff, with Robert Taylor, the eponymous sheriff:

A. Martinez, a.k.a. the nefarious Jacob Nighthorse who will no doubt be redeemed in some noble way in the series finale, with a selfie:

Feeling the warmth of the wind, ready for the last week, after six years of joy in our beautiful home away from home. #SantaFe #LongmireS6 #AliveInTheWorld #BeneathTheEverSpeakingSky

And here is Louanne Stephens, nobody doesn't like her:

And here, much sadder, is Bartley paying tribute to Cassidy Freeman, who has played Cady:

Tonight under a golden sky we said goodbye to our Cady Played by my brilliant, beautiful friend Cassidy Freeman @hatface We will always have these years full of rich deep memories and moments. Bravo my dear #longmire #finalseason #behindthescenes #actorslife

Here is Freeman saying goodbye on her final day with a very cute dog which almost makes El Mitotero forget how sad he is — almost:

I just finished my final scene on Longmire. This trailer has been my temporary home for 6 seasons...I leave it today and I am so grateful for this time. I know I'll see this incredible crew and these incredible actors in jobs to come...the one I'll truly miss is Cady Longmire. Thanks for letting me bring you to life, Punk. #LongmireS6

Look at this wonderful group. They are all wonderful. Can't they stay forever?

The 10 new episodes will premiere on Netflix sometime in the fall. El Mitotero will be crying softly over a can of Rainier until then.

As astutely noted in the comments, one goodbye was egregiously omitted: Bartley's tribute to Zahn McClarnon, who has played tribal police chief Mathias with aplomb (and also loves Palacio).

Tonight we all gathered to honor our brother Mathias, played so brilliantly by my dear friend @zahnmcclarnon as he bids #Longmire Goodbye after 6 incredible seasons of work. Deeply Grounded, soft spoken thunderous spirit, and a massive heart filled with playful generous joy are just a few words that encompass this beautiful man. I'm so blessed and grateful to have had the opportunity to share space with him. On and off camera. Now watch him soar even higher... #blessed #finalseason #actorslife #gratitude