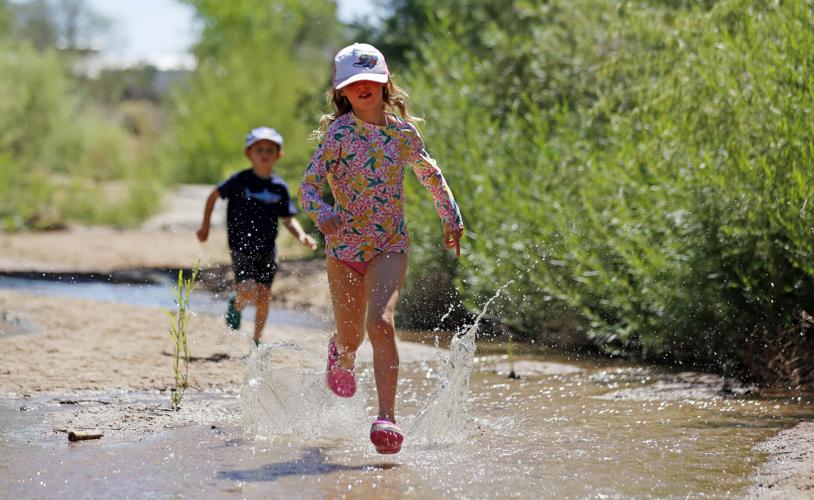 Leah Flores, 8, of Santa Fe runs in the Santa Fe River with her brother Joey Flores, 6, on Friday. About 80 miles worth of major arroyos in Santa Fe drain into the river, with many more miles worth of smaller tributaries also in the city. 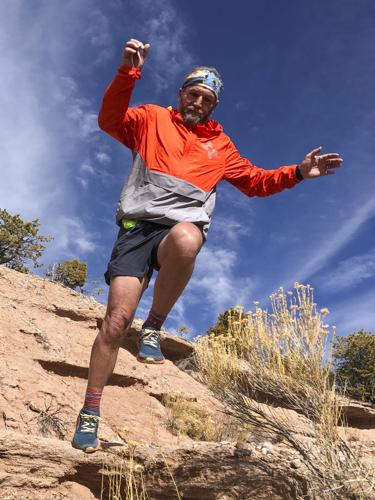 Peter Olson has been running in Santa Fe’s arroyos while Santa Fe National Forest has been closed due to extreme fire danger. 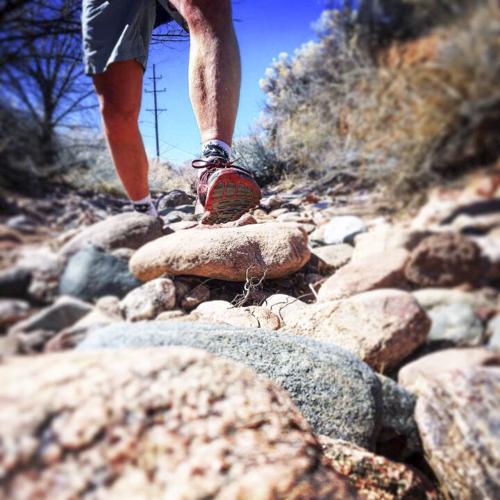 Peter Olson walks over rocky terrain in one of Santa Fe’s arroyos. Moving through the arroyos can be slow while trying to run or hike through the sandy and rocky environments, he says.

Leah Flores, 8, of Santa Fe runs in the Santa Fe River with her brother Joey Flores, 6, on Friday. About 80 miles worth of major arroyos in Santa Fe drain into the river, with many more miles worth of smaller tributaries also in the city.

Peter Olson walks over rocky terrain in one of Santa Fe’s arroyos. Moving through the arroyos can be slow while trying to run or hike through the sandy and rocky environments, he says.

Peter Olson has spent the past several years organizing ultra-marathons in the Santa Fe area that have attracted people from around the country to take part in grueling races up to 50 miles long in the Sangre de Cristo Mountains.

With alpine trails currently inaccessible due to national forest closures around the state and popular city trails also off limits because of the extreme fire danger, the Endurance Santa Fe founder has been spending more of his free time below street level rather than above the treeline.

A vast web of arroyos sprawled across Santa Fe offers dozens of miles worth of exploration, he says, and opportunities to see the city from a unique perspective.

Olson, 60, began his arroyo adventures when he moved to Santa Fe more than 30 years ago. He started running them during his lunch break to avoid the traffic on paved trails and because of the ease of access from his office. The trees, rock formations, wildlife and relative solitude he found made it a habit he’s kept for years.

“You get a little bit of that sense of being away from civilization, and then you pop back out and you’re back to work in the afternoon,” Olson said. “It’s really a good way to clear your head.”

Gates spent five months of 2017 running coast to coast from Folly Beach, S.C., to San Francisco — a journey he wrote about in Cross Country: A 3,700-Mile Run to Explore Unseen America and that was made into the first-person documentary Transamericana.

The following year, he undertook a project called Every Single Street, in which he ran every street in San Francisco. He covered more than

Every Single Street took off on social media, and runners all over the world took on the venture in their hometowns.

Gates began the same project in Santa Fe in December 2019, and Olson decided to try his own version the following month by running and mapping every single arroyo in the city.

Olson said he hasn’t run them all yet, but has covered about 100 miles so far.

“I really like exploring, finding out what’s around the next corner, so when I started this project I got into arroyos that I had never been in before,” Olson said. “I’d look on Google Maps or satellite images and say, ‘Here’s a green snake going through the city, you can see trees there, so I’m going to find out where that arroyo goes.’ ”

The arroyos are all part of a large drainage network and eventually connect with the Santa Fe River. The sandy channels created by erosion are dry most of the year, but on rare occasions can turn into dangerous, raging torrents during strong monsoon deluges and should be avoided when storms are in the area.

Olson has made some exciting finds wandering the arroyos. There are some narrow, steep-sided channels that have the feel of slot canyons. He’s also spotted large mule deer when he has hiked an arroyo between Christus St. Vincent Regional Medical Center and St. John’s College.

Not far from busy roads, the arroyos provide an urban habitat for a wide array of wildlife.

“I’ve seen a couple of really big bucks with huge racks, coyotes, snakes, lots of birds and birds of prey,” Olson said. “I’ve seen [red-tailed hawks] pick up snakes off the ground. And that’s right in the middle of town.”

Along with the enchanting encounters, there are plenty of sad sights.

Stretches of arroyos are filled with large quantities of trash, and there are homeless encampments that have developed in certain areas. The Santa Fe Watershed Association recommends avoiding sections of arroyos or the river that feel unsafe for any reason.

Advocates say it’s an ongoing battle to keep up with the trash that winds up in the drainages.

“We pull literal tons of garbage out of our waterways each year,” said Amara Nash, director of stewardship and community outreach for the Santa Fe Watershed Association. “If we weren’t doing that, there would be even more trash. But it’s not like we’re just going to clean them and they’re going to be clean. It’s a constant flow.”

The watershed association has partnerships with the city and county of Santa Fe, getting financial support to organize teams of stewards that go out and clean the Santa Fe River and arroyos.

The money doesn’t cover the full costs, so the watershed association has sponsorship programs that allow community members or organizations to help pay for cleanup efforts in sections of the river or arroyos. Adopt-the-River and Adopt-an-Arroyo programs designate volunteer steward teams to clean sponsored stretches of the drainages.

Nash said 30 reaches of the river and 15 arroyo reaches have been adopted.

There are also three community cleanup events the watershed association organizes each year. The next one is June 20-26 to coincide with a national waterway cleanup campaign by the conservation nonprofit American Rivers.

That week, the Santa Fe Watershed Association will provide trash bags and snacks from their office at 1413 2nd St. Suite 3 for groups that wish to participate in cleanups. Nash said groups are asked to report where they clean up, how long they picked up trash and how many participants are on the team.

Because he regularly uses the arroyos, Olson said he decided to get involved in the Adopt-an-Arroyo program through Endurance Santa Fe. His organization is a steward of a reach along Arroyo de las Cruces near Frenchy’s Park and sponsors a stretch of Arroyo de los Pinos north of Sam’s Club.

While Olson said he doesn’t frequently see people when he’s running arroyos, he notices their tracks. Locals walk their dogs, go on hikes or even ride their bikes in arroyos.

Mike Chapman, owner of The Broken Spoke bike shop, said he utilizes dry stretches of the Santa Fe River and various arroyos around town with his fat bike when conditions don’t allow for riding his mountain bike at higher elevations. The oversized tires of the fat bike allow riders to navigate sandy terrain other bikes can’t get through.

Chapman said some of his mountain biking friends won’t ride arroyos — it’s too slow for them — but it has its place in his riding repertoire.

“It’s more like exploring,” he said. “The riding itself isn’t super exciting, but seeing something for the first time is fun.

“If you’ve lived here for a long time and you know the town like the back of your hand, it’s like, ‘I’ve always crossed that arroyo, where does it go to?’ ”

Along with Olson and Gates, Meg Eckert is part of a sizable contingent of ultrarunners in the Santa Fe area. The forest closures have hampered training for upcoming races, but on Olson’s advice, Eckert has mixed arroyos into her preparation.

“I was discouraged by not being able to get into the mountains, but the fire danger is real, and safety is more important,” said Eckert, 35, who is heading to Wyoming this weekend for a 100-mile race at the Bighorn Trail Run. “I’ve learned to adapt this year to other training methods.

“It’s the first time I’ve spent a lot of time in the arroyos,” she added. “Running in the sand has been a challenge, but it’s nice that we have that available to us.”

For others discouraged by trail closures who haven’t explored arroyos yet, Olson recommends giving it a try.

There are arroyos near most neighborhoods, and he suggests climbing down into the nearest one and letting your curiosity carry you.

“I think arroyos are a really underappreciated feature of our town,” Olson said, “but I think they offer lots of recreation options, lots of exploration options, and I think it helps people realize that if there’s 100 miles of arroyos in the city limits, that’s a lot of space for people to get out into.”

The Santa Fe Watershed Association’s Summer Cleanup event takes place June 20-26. Groups interested in participating can pick up trash bags and snacks at the watershed association office at 1413 2nd St. Suite 3 from 10 a.m. to 1 p.m. on June 20 to June 25.