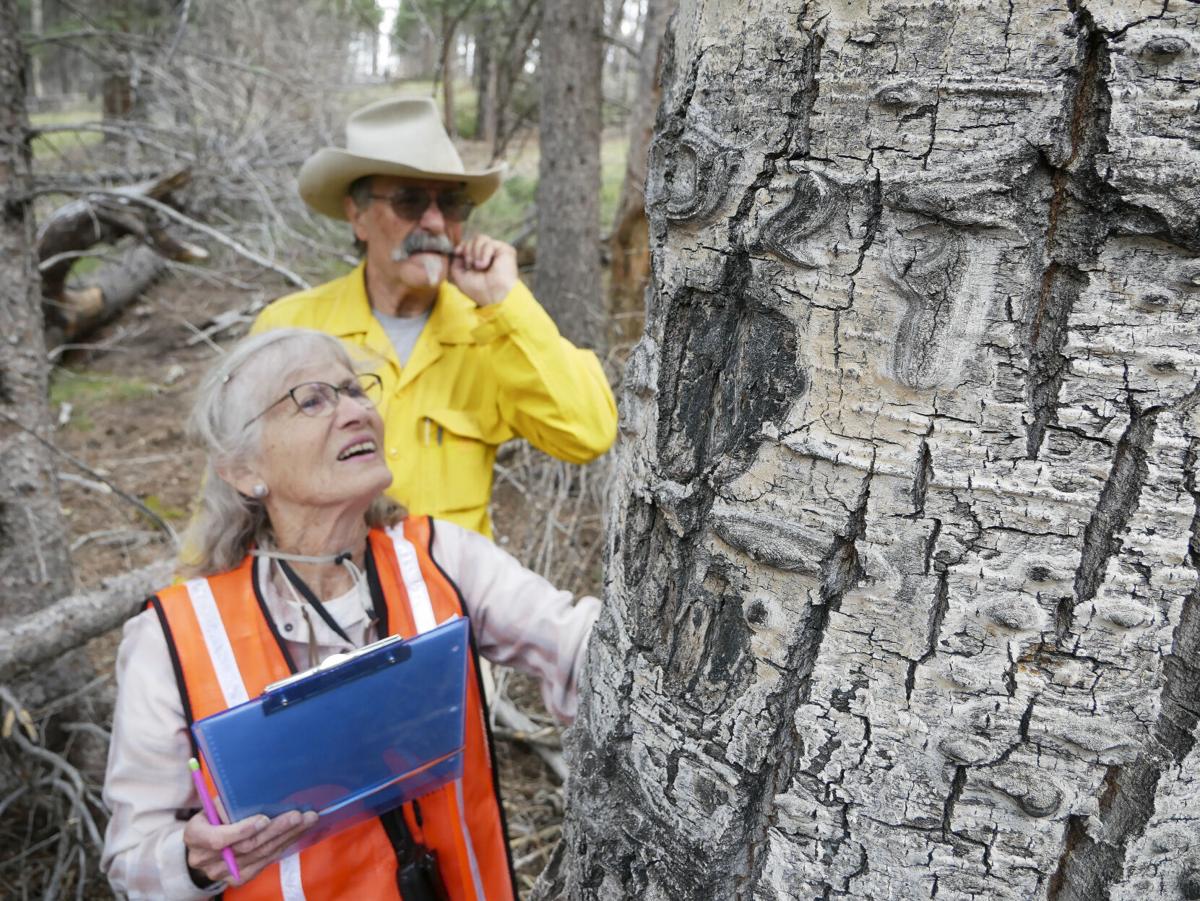 Yvonne Keller and Steve Daly check out a dendroglyph of a date on an aspen tree in Valles Caldera National Preserve last month. More than 3,300 dendroglyphs have been recorded by volunteers. 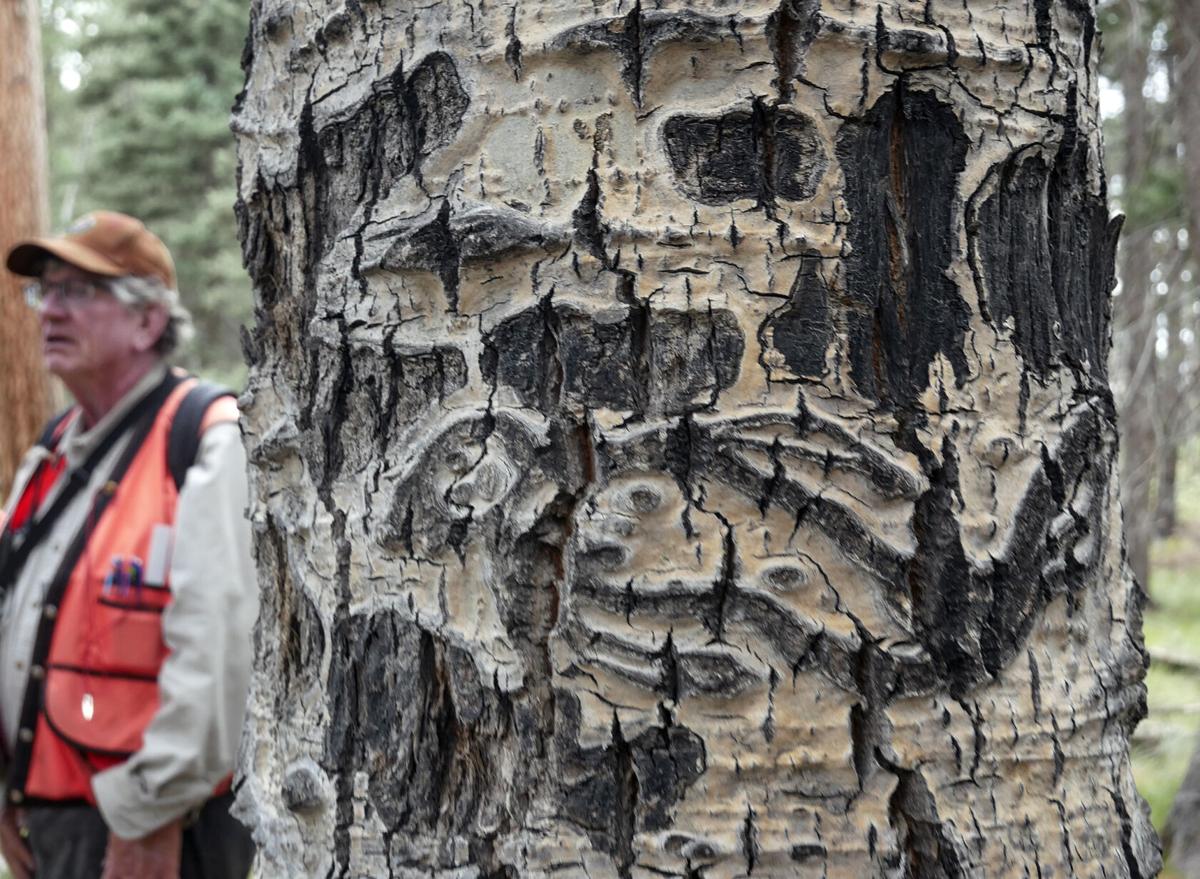 Randy Pair stands behind an aspen tree that features a carving of a mermaid in the backcountry of Valles Caldera National Preserve last month. 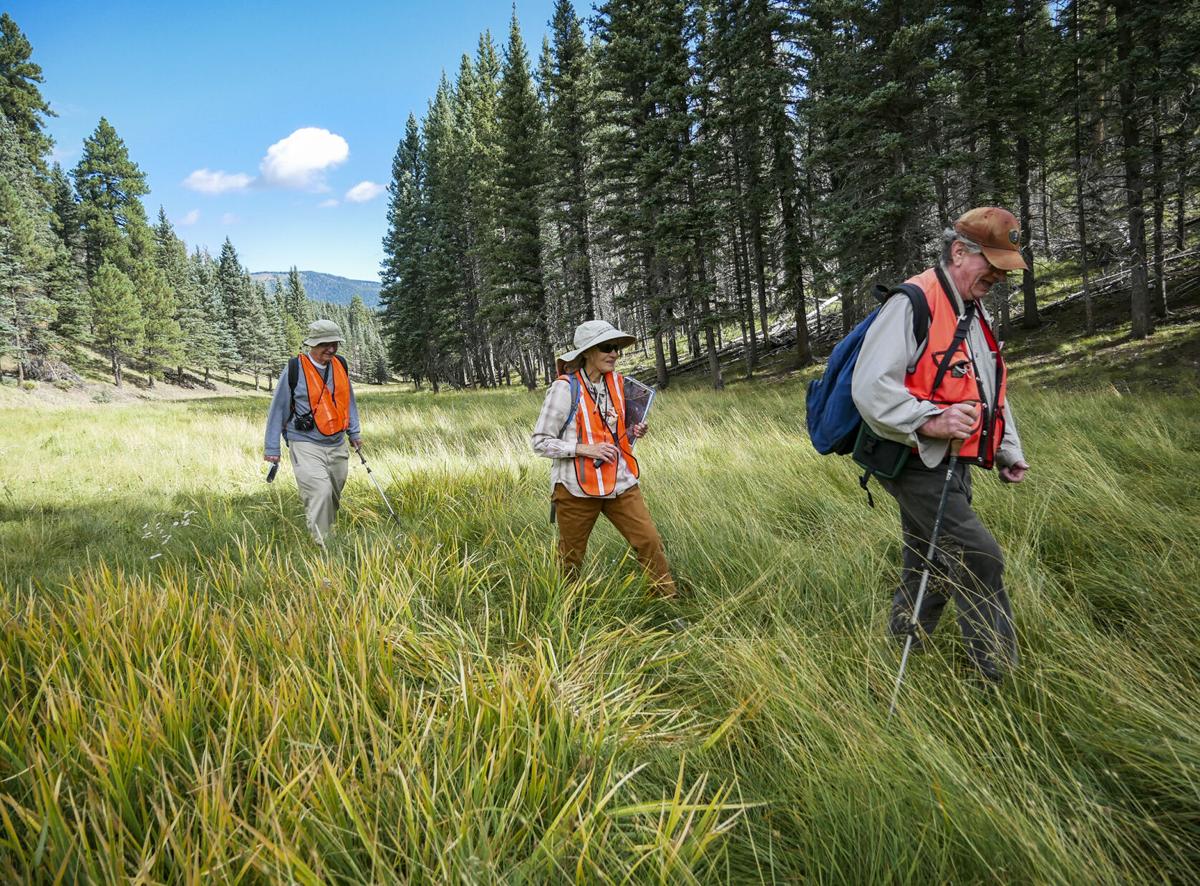 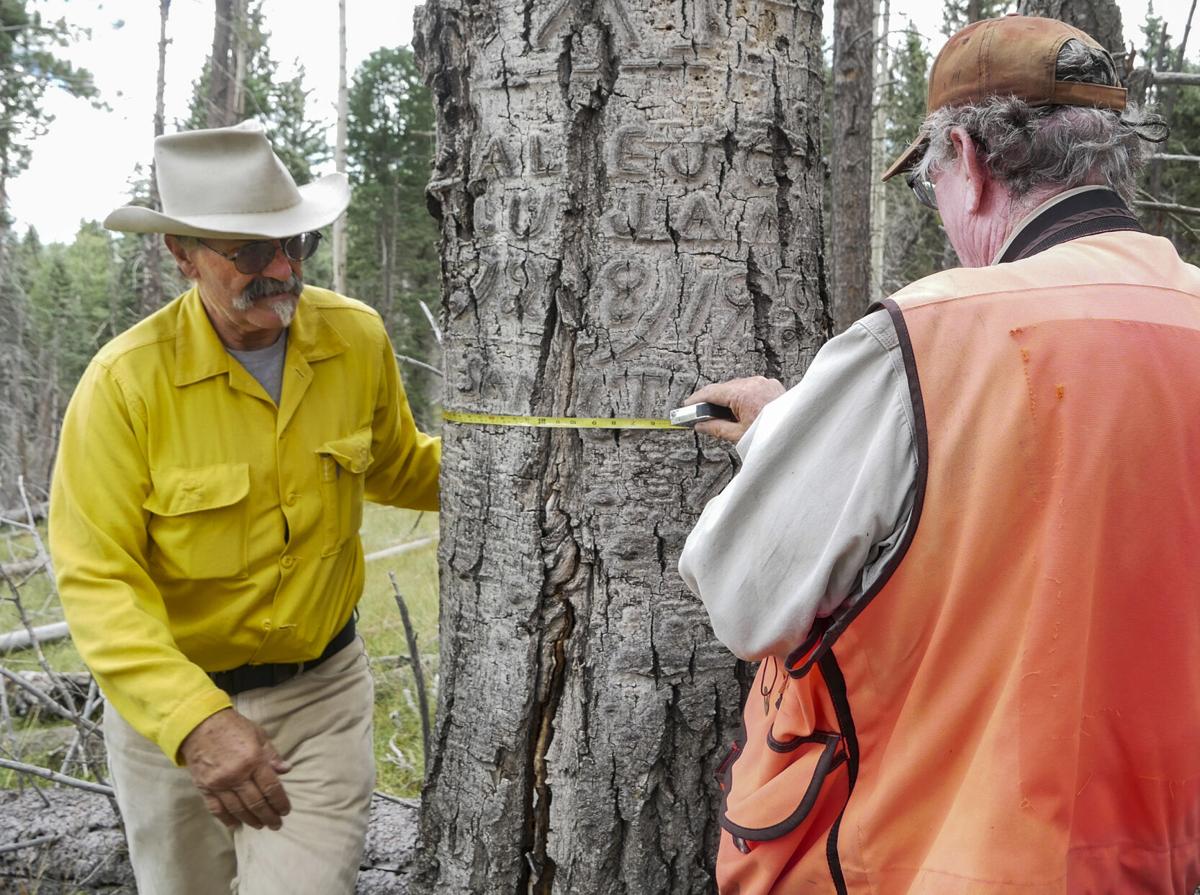 Steve Daly, left, and Randy Pair measure the circumference of an aspen tree that has a dendroglyph carved by Alejo Lujan, one of the more prolific carvers in the Valles Caldera in the 1910s and 1920s who frequently included the place names of Cow Spring and Santa Fe with his name. 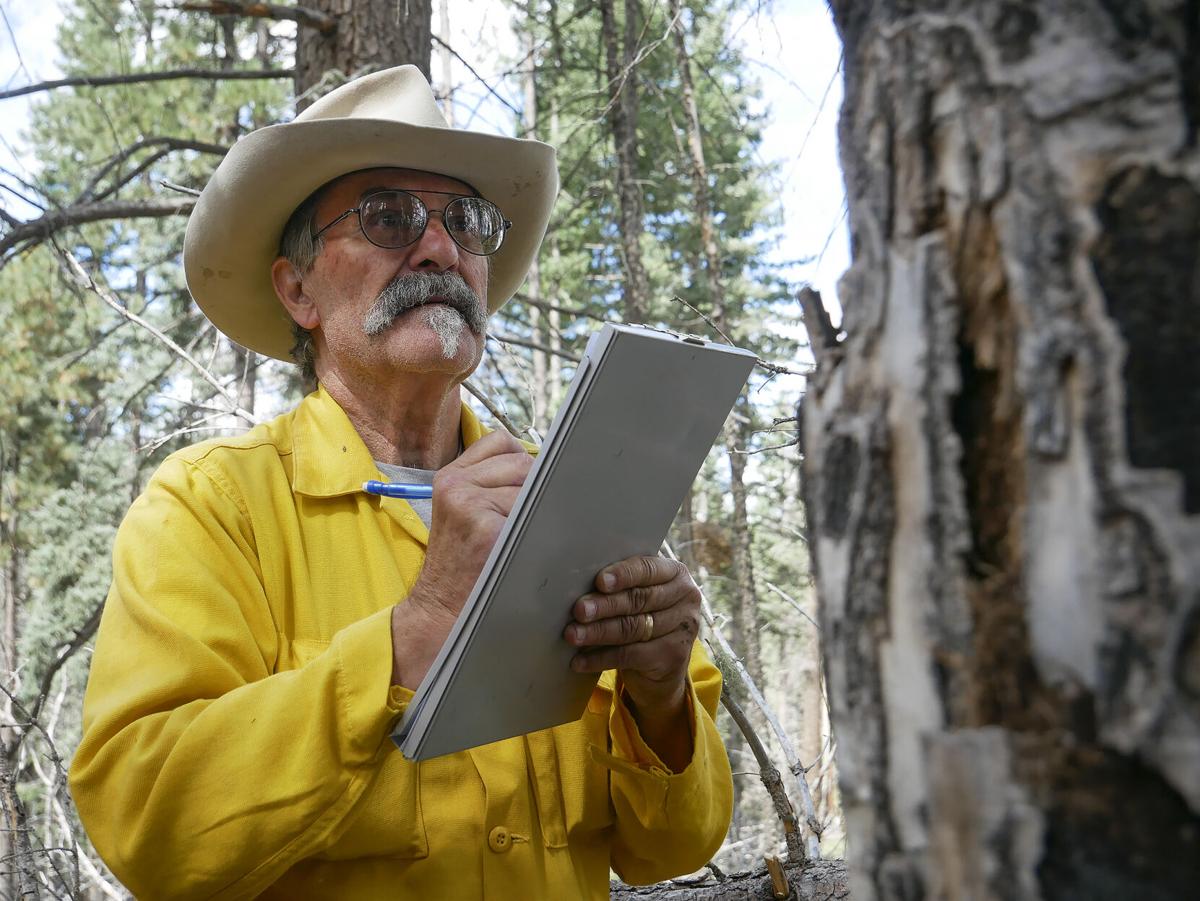 Steve Daly sketches a dendroglyph on an aspen tree in the backcountry of Valles Caldera National Preserve last month. 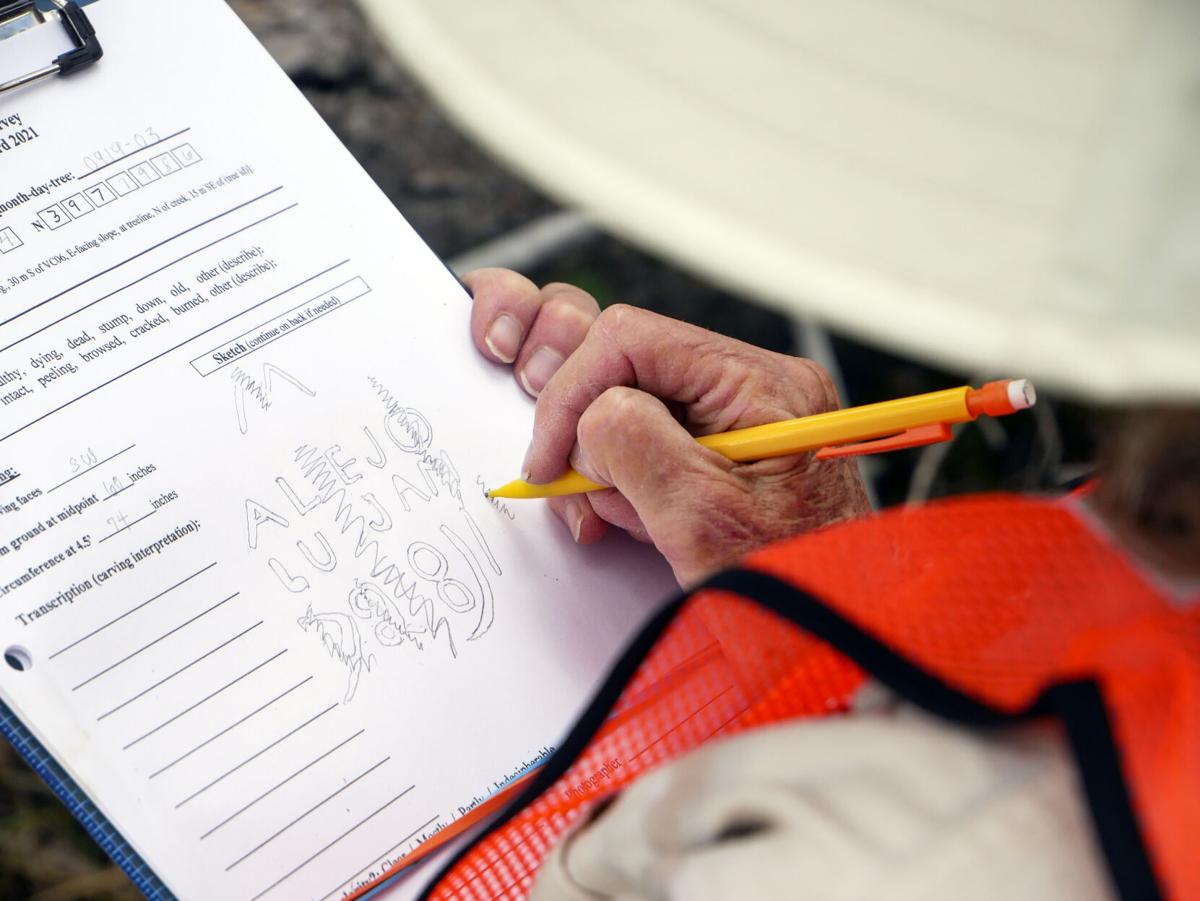 Yvonne Keller sketches a dendroglyph carved by Alejo Lujan, one of the more prolific carvers in the Valles Caldera in the 1910s and 1920s who frequently included the place names of Cow Spring and Santa Fe with his name. 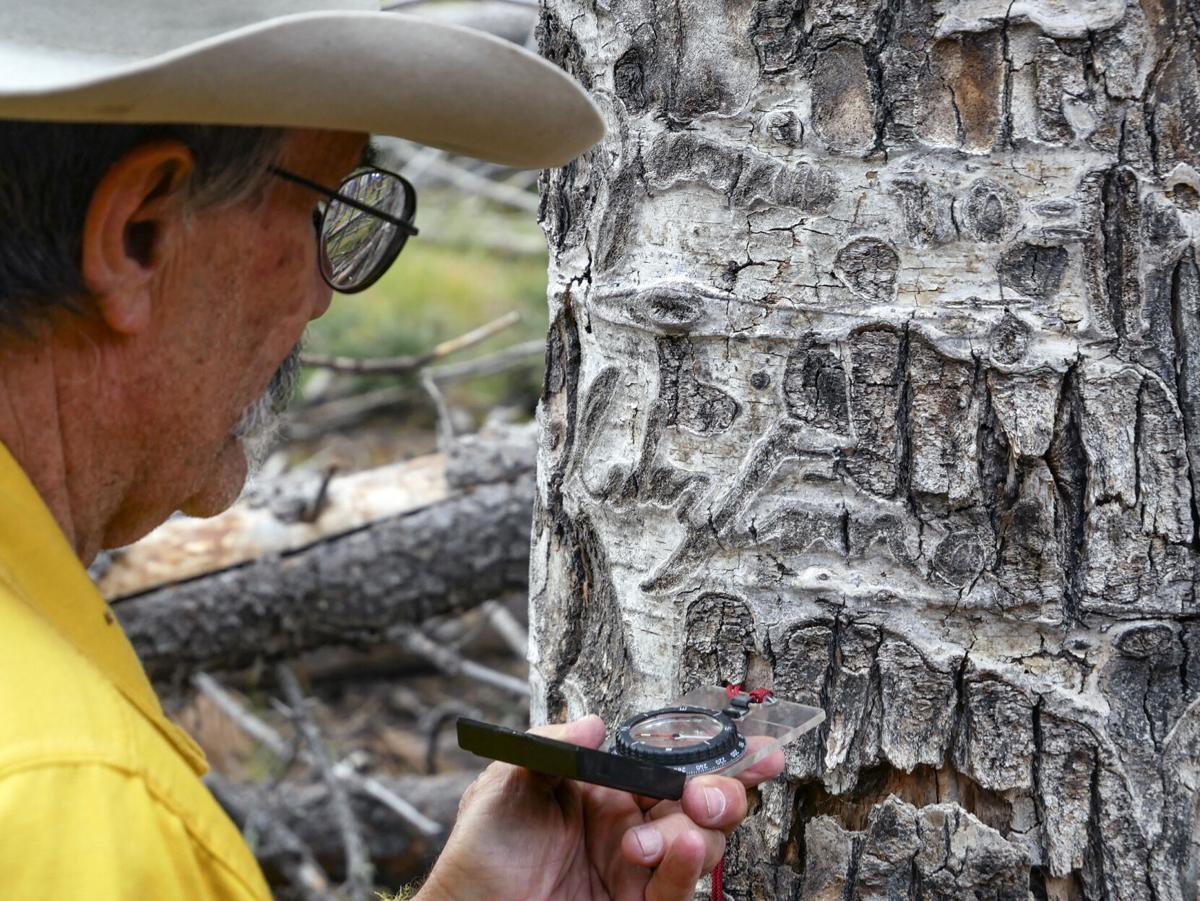 Steve Daly determines the direction a dendroglyph is facing on an aspen tree last month in Valles Caldera National Preserve. The dendroglyph was carved in script.

Yvonne Keller and Steve Daly check out a dendroglyph of a date on an aspen tree in Valles Caldera National Preserve last month. More than 3,300 dendroglyphs have been recorded by volunteers.

Steve Daly sketches a dendroglyph on an aspen tree in the backcountry of Valles Caldera National Preserve last month.

Yvonne Keller sketches a dendroglyph carved by Alejo Lujan, one of the more prolific carvers in the Valles Caldera in the 1910s and 1920s who frequently included the place names of Cow Spring and Santa Fe with his name.

The haunting calls of bugling bull elk pervade the autumn air, echoing across the grass valleys and forested lava domes of Valles Caldera National Preserve as a cadre of volunteers spreads out in search of needles in a nearly 90,000-acre haystack.

Navigating deadfall while meticulously combing the slopes and drainages of the preserve’s backcountry, the retirement-age men and women intermittently make calls of their own by shouting or communicating through two-way radios.

“I’ve got one over here!” are the words that bring group members back together as they excitedly converge on an aspen to try to decipher a new finding from an old message.

Hispanic sheepherders in the early 20th century frequently carved their names, sometimes with the date and the name of their hometown, on the smooth white canvases of the aspen in what was known as Baca Location No. 1, or the Baca Ranch.

These tree carvings, or “dendroglyphs,” number in the thousands in the caldera and reveal bits of history about the people who worked on the land a century ago.

Discovering a dendroglyph, especially a clearly identifiable name or drawing, generates a real rush for the finder.

“It’s like a pot of gold,” said Colleen Olinger, 80, a Los Alamos resident who has been the volunteer survey program’s leader since its inception in 2008. “It is exciting. You know that you have recorded something that, if you didn’t record it, nobody else would, and it would be gone forever.”

The melding of a cultural resource on a fragile natural resource results in a time-sensitive endeavor to document the dendroglyphs before they disappear.

Olinger said the dendroglyphs are usually found on dead trees or those nearing the end of their lifespan. Aspen can live up to 150 years, but they more typically begin to die around 80 to 100 years of age. When the trees fall and decompose, the dendroglyphs go with them.

Most of the documented dendroglyphs date from the 1920s to 1940s, Olinger said. A small number from the late 1800s has also been found, while many from that era have been lost to decay.

Through 2020, the volunteer crew had recorded 1,383 of the more than 3,300 dendroglyphs that have been found within the preserve, or about 40 percent. Professional archaeologists have found the others while conducting full archaeological surveys in the caldera.

Dr. Anastasia Steffen, interdisciplinary scientist and communicator at the preserve, has overseen the volunteer survey program since she initiated it in 2008. She said the data the dozens of volunteers have collected over the past 13 years has provided important context and information about an often overlooked subset of predominantly Hispanic people who worked in the region in the early 1900s.

“Their history isn’t really told anywhere else but in their own chronicling on the trees,” Steffen said of the sheepherders. “What is really extraordinary is we can connect actual families whose descendants are still living in the area today to the preserve.”

In a 1981 study of the land-use history of the preserve, historian Dan Scurlock wrote the sheepherders of this period worked under a partido system that was similar to sharecropping.

In this system, Scurlock wrote, a landowner would give a small herd of sheep to add to a partidario’s flock and allow for grazing on the land. A contract would require the partidario to annually return half the increase in the flock and sheared wool to the owner and to compensate the owner for all losses. After five years, the owner was to be repaid the sheep originally given to the partidario.

Brothers George and Frank Bond, Canadian businessmen and entrepreneurs, purchased Baca Location No. 1 in 1918. Most of the dendroglyphs that have been found on the preserve were carved by sheepherders who grazed their flocks on the land while it was owned by the Bonds.

The dendroglyph hunters have found carvings that included place names as far north as Chama and as far south as Los Lunas. Steffen compiled a report in 2018 that found the most commonly carved place names to be Cuba, Chamita, Santa Fe and Cow Springs.

The family names found among the caldera carvings are overwhelmingly Hispanic. The most prevalent are Martinez, Lujan, Trujillo, Sanchez, Salazar and Garcia.

Reading the names or deciphering the drawings is frequently a challenge for the volunteers.

Aspen bark can fissure as the trees age, becoming dark and rough around the trunk. Many of the dendroglyphs have degraded because of this and are partially missing or broken apart.

The elk that inhabit the preserve create additional obstacles. Elk eat aspen bark, and their gnawing can scrape away dendroglyphs or create marks that can be confused with tree carvings.

The collection of volunteers is mostly made up of retirees with diverse professional backgrounds from the Los Alamos and White Rock area. They typically go into the Valles Caldera backcountry in a group of four to five people, and sometimes they need every one of them to determine what has been carved.

“How many Ph.D astrophysicists does it take to recognize an image?” jokes Bob Dryja, 74, a retired health care administrator who has become the designated dendroglyph photographer of the group.

Dryja recounted an instance when the volunteers encountered a strange curved oval carved into an aspen with markings inside. Nobody in the group could tell what it was until Steve Daly, a New Mexico native, stepped back and recognized that it was a carving of Our Lady of Guadalupe.

The volunteers use the same methods to document the dendroglyphs as the professional archeologists.

Each carving is recorded with a digital photo and a drawing. Other information, including the GPS coordinates of the tree, the direction the carving is facing, the height of the carving from the ground at its midpoint and an interpretation of the carving, is also taken down.

The volunteers are able to cover survey areas much more quickly than the professional archaeologists, Steffen said. While the volunteers just need to look for aspen, the archaeologists also must focus on the ground surface and document all cultural resources they find.

The rapid process of the volunteers is helpful in recording more dendroglyphs before they’re lost to degradation, fire or other threats.

The group was honored for its efforts at the national level in 2010 when the volunteers were recognized as Preserve America Stewards by the Advisory Council on Historic Preservation, an organization that promotes the preservation and enhancement of the nation’s historic resources. Dozens of volunteers have logged thousands of hours in the caldera since, with plenty more forest to explore.

It’s not any sort of recognition that keeps the volunteers going, however. It’s the joys and surprises that come with being in nature and the camaraderie that has developed while poking through the trees together.

“It’s being outdoors with people that enjoy being outdoors,” said Randy Pair, 69, a biologist who worked as a botanist for the U.S. Forest Service.

For the past few years, Pair has been organizing the group’s trips into the preserve. There are typically one or two trips a week from June into November, depending on the weather.

After the outings, the volunteers frequently gather at Olinger’s home for drinks and recount their experience in the field.

The promise of seeing something new each week — whether it’s a sheepherder’s carving of a mermaid or acres of irises blooming in a valley — keeps the volunteers excited about coming out to the caldera.

They say they feel fortunate to have been entrusted by the Valles Caldera staff to help document a piece of history in a place they’ve come to hold dear.

“It’s a community where there are a lot of highly educated people who in their careers worked on understanding the world around them,” Dryja said. “By being able to go out and look for dendroglyphs, there’s an opportunity to continue practicing science and data gathering in a really spectacular natural setting.”

To inquire about volunteering with the dendroglyph survey team, contact Colleen Olinger at ce.olinger@gmail.com.

It seems that the carvings are being glorified (even though they are very old)--yet it is very harmful to the aspen trees. I'm disappointed that wasn't mentioned in your article.

What a wonderful story -- on so many levels.