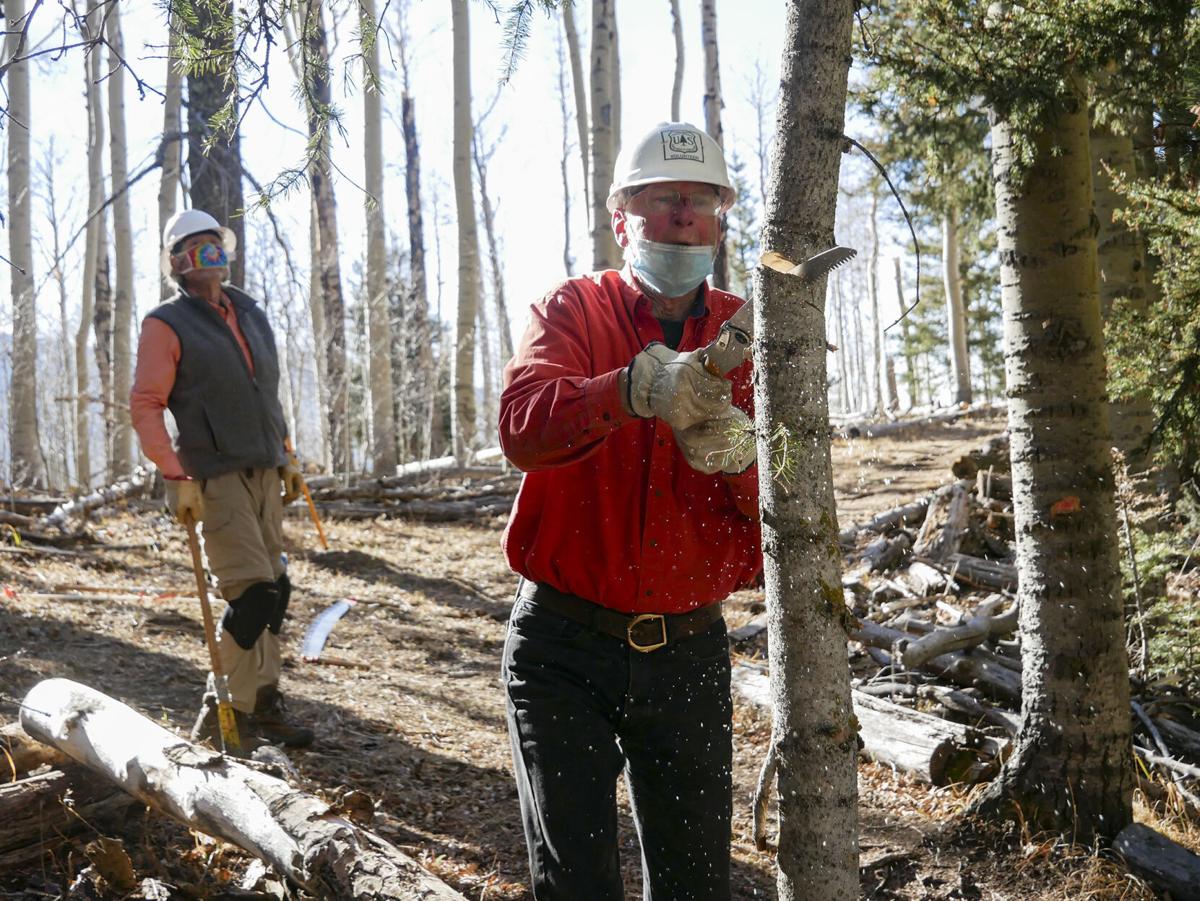 Richard Heath saws through a tree growing over a path on the Norski Trail on Nov. 20, as Walter Futrell looks on. The volunteers have spent months doing maintenance on the cross-country ski trail, which also has become popular with hikers when weather allows. 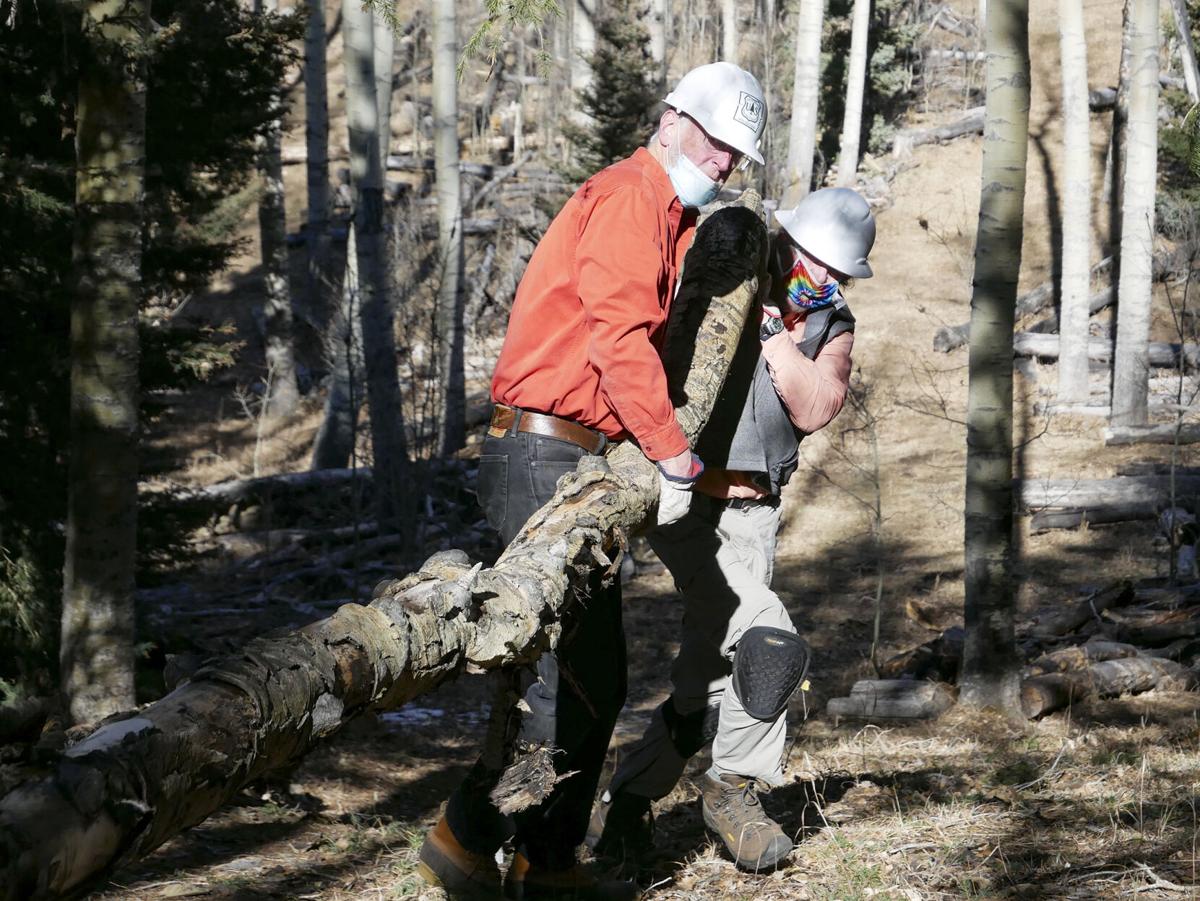 Heath and Futrell haul a fallen tree off the Norski Trail. ‘There were probably two dozen trees across the trail’ when the restoration effort began, Futrell said. ‘It was in really bad shape.’ 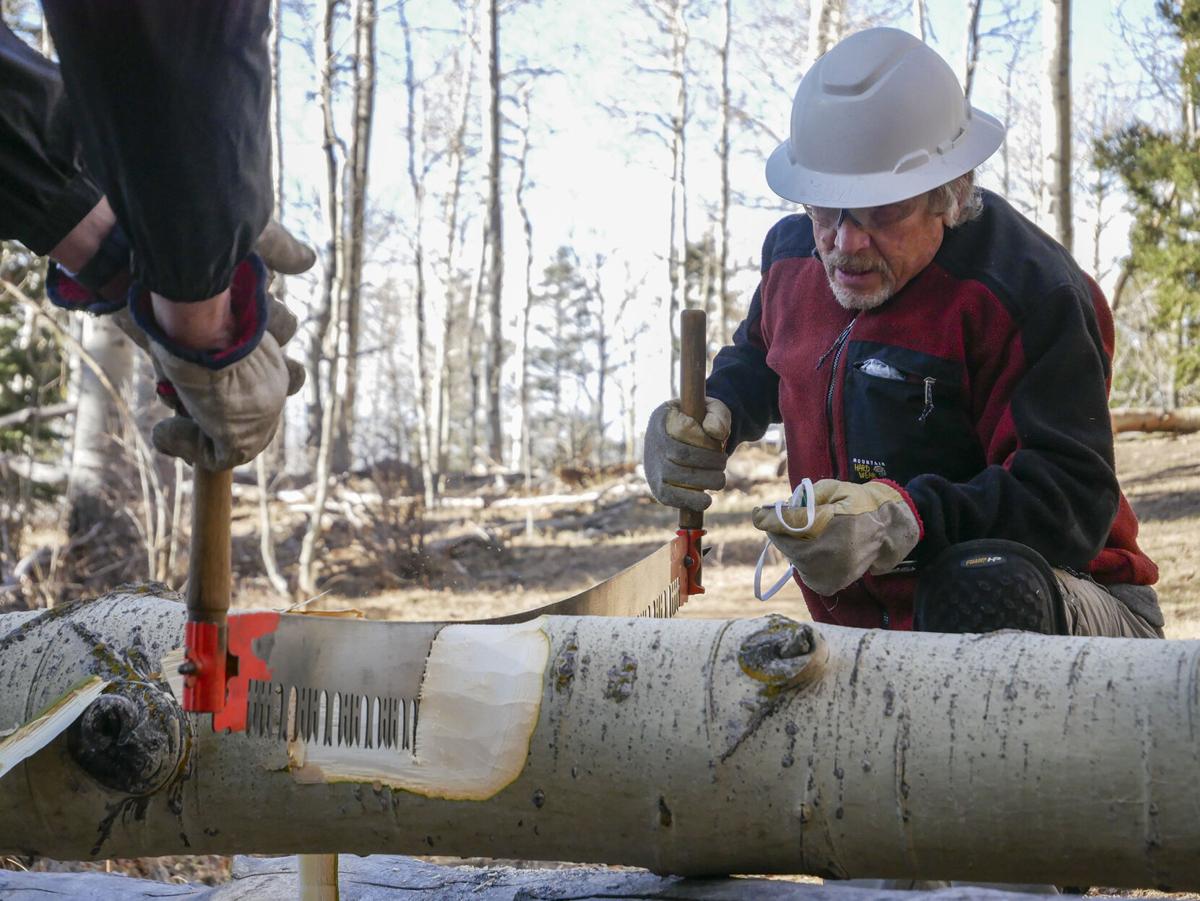 Walter Futrell, right, and Richard Heath saw through a tree that had fallen across the Norski Trail while they perform trail maintenance Nov. 20.

Richard Heath saws through a tree growing over a path on the Norski Trail on Nov. 20, as Walter Futrell looks on. The volunteers have spent months doing maintenance on the cross-country ski trail, which also has become popular with hikers when weather allows.

Heath and Futrell haul a fallen tree off the Norski Trail. ‘There were probably two dozen trees across the trail’ when the restoration effort began, Futrell said. ‘It was in really bad shape.’

Walter Futrell, right, and Richard Heath saw through a tree that had fallen across the Norski Trail while they perform trail maintenance Nov. 20.

While hiking in the Santa Fe National Forest last spring, Walter Futrell clambered over dozens of downed trees and low-hanging branches along the Norski Trail.

A board member for the New Mexico Volunteers for the Outdoors, Futrell decided to do something about the debris.

He assembled a team of volunteers who performed nearly 900 hours of trail maintenance from May to late October.

“There were probably two dozen trees across the trail” when the restoration effort began, Futrell said. “It was in really bad shape.”

Today, there is “a nice, big difference,” he said. “And that for me is personally rewarding.”

The Norski Trail is nestled in an aspen forest near the Santa Fe ski basin. Though it was designed for cross-country skiing, it has become a popular hiking trail warmer months.

Armed with an ax and saw, Futrell spent three days a week clearing the trail. At first, he was the only volunteer.

Then one day, he struck up a conversation with Richard Heath, who was hiking the trail with his wife. They exchanged phone numbers, and a few days later Heath called Futrell and said he was interested in helping.

It was a couple of months into the pandemic, and Heath was itching to get out of the house.

“It’s been great to be able to be outdoors during this strange time,” Heath said. “It makes the weeks go by” more quickly.

Futrell and Heath, who are retired, used a two-person cross-cut saw to slice through fallen trees, some of which were up to 15 feet long and a foot and a half wide.

Before the work began, parts of the trail were so narrow that hikers could barely pass through. By removing the wayward timber, the crew restored the track to its original width.

“It’s quite an accomplishment,” said Heath, who volunteered up to two days a week. Looking at the trail now and knowing what it looked like before, “you can really appreciate the difference.”

As the summer wore on, Futrell recruited more volunteers. Elizabeth VanArsdel was walking her dog along the trail one day when she saw “these two older guys slugging it out with tree branches,” she said.

She stopped to talk and agreed to help trim saplings that had sprouted along the trail.

“Since I like to hike so much, this is something that I should contribute to, with a little bit of sweat equity,” VanArsdel said.

Futrell also invited other members of New Mexico Volunteers for the Outdoors to help with trail clearing. Jon Blakey, who has been involved in the group for several years, squeezed in a few sessions with Futrell.

“It’s a very pretty area,” Blakey said of the trail. “It got me thinking, ‘Gee, I need to take up cross-country skiing.’ I haven’t done that since my 30s and I’m 70 years old now.”

They removed deadfall and other debris that might be a hazard to skiers.

“It just cleaned it up nicely, and it’ll be particularly nice for skiers now,” Blakey said.

Futrell has helped restore other trails in previous years.

“And so we got to talking about the Norski Trail and how it needed clearing, it needed some upkeep and some TLC,” said Jennifer Sublett, a volunteer coordinator for Santa Fe National Forest.

“Walter would encounter people on the trail and he would tell them what he was doing and that would motivate other people to get involved,” she added. “We’re really appreciative of that. He’s done a lot of great work out there.”

Futrell said his crew completed about 88 percent of the work they set out to accomplish on the Norski Trail.

“There’s some stuff we’ll go back and do next spring, next summer,” he said. “There will probably be more downed trees that need to be moved.”

Thank you so much for clearing the Norski trail! My husband and I have skied there for decades. It is a beautiful spot, and important for keeping us healthy and restoring our spirits, especially during this time. I really appreciate your efforts - without them, it would be very difficult to ski there. Hikers, please remember to use other trails when there is any snow on the ground. Hiking on the Norski trail when there is any snow makes skiing much more difficult or impossible. Thank you!

I live up Rociada way outside of Las Vegas. I would like to be part of work groups for the trails somewhat close by me. With notice, I can easily come down to the Sanat Fe area to help. Have tools to use including chain saws if necessary.

Thank you volunteers for your hard work! That will make a huge difference for skiers and hikers alike!

Well said Katherine! It's hard work and we need more folks like these guys in our community!!

900 hours on a trail that goes nowhere. Nambe' Lake trail has been eroding for decades needs real drainage and stone supported switchbacks, it has had more use this year than ever. Do something useful, instead of this 'old man feel good' nonsense.

holy moly --- you win the prize for most rude comment of the day.

Miss Fish, the forest service offers training to get sawyers licenses so you can legally help clear trees. there are many other organizations that do trial work in Santa Fe. The Santa Fe Fat Tire Society has literally volunteered thousands of hours of time on trail maintenance on some of our most popular trails. The Santa Fe conservation trust, under the direction of Tim Rogers, organizes trail maintenance days on trails in and around Santa Fe. As for the Norski trails, they are close in with ample parking, meaning many more santa fans can access a close in outdoor experience, something that is greatly needed in our trying times. So yeah, lighten up, and if you want something different maintained, make it your personal goal to get trained, certified, and permitted to go work on that trail. Its there, waiting for you...

Which trails have you been working on, Ms. Fish?