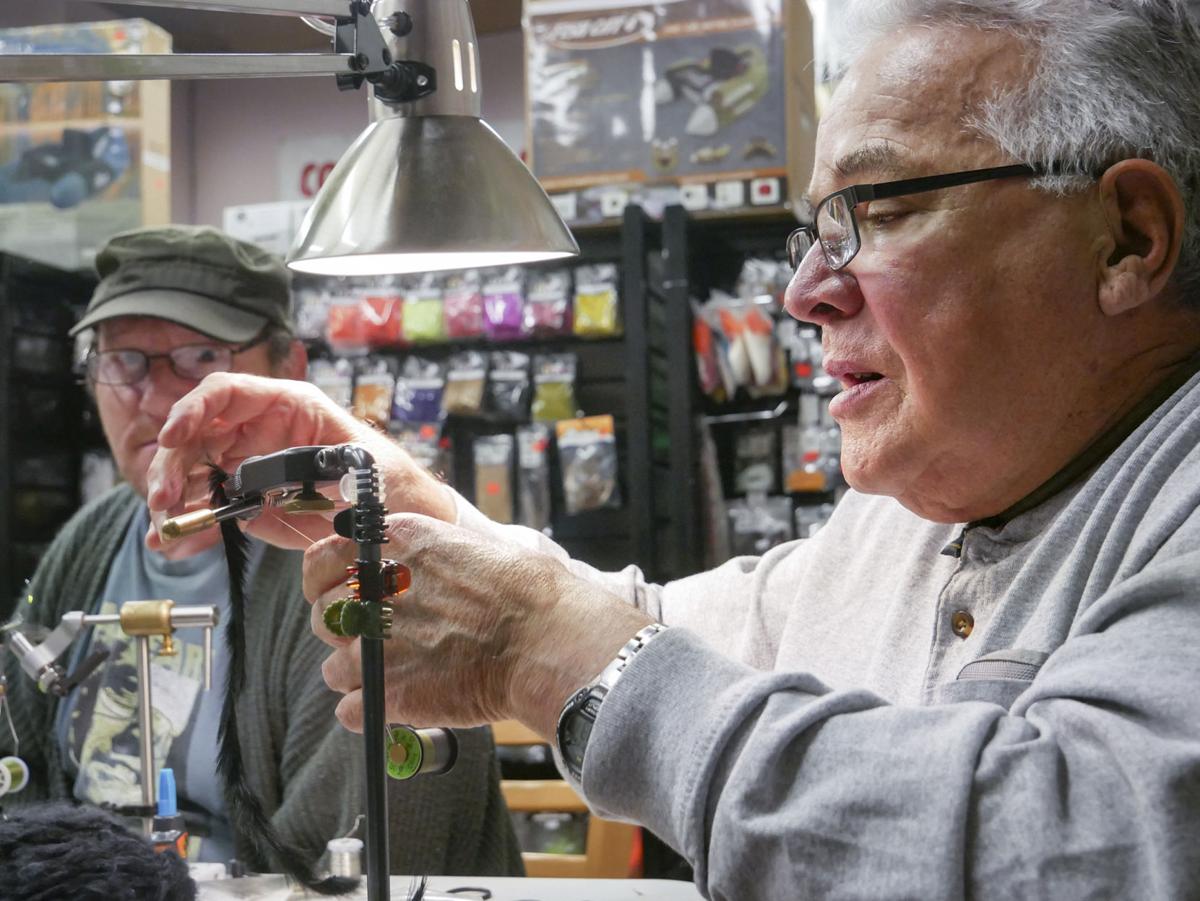 Gene Pacheco works on tying a fly Jan. 19 during a fly-tying class at The Reel Life. Pacheco said he’s been leading the free class each Sunday for the past four or five years. 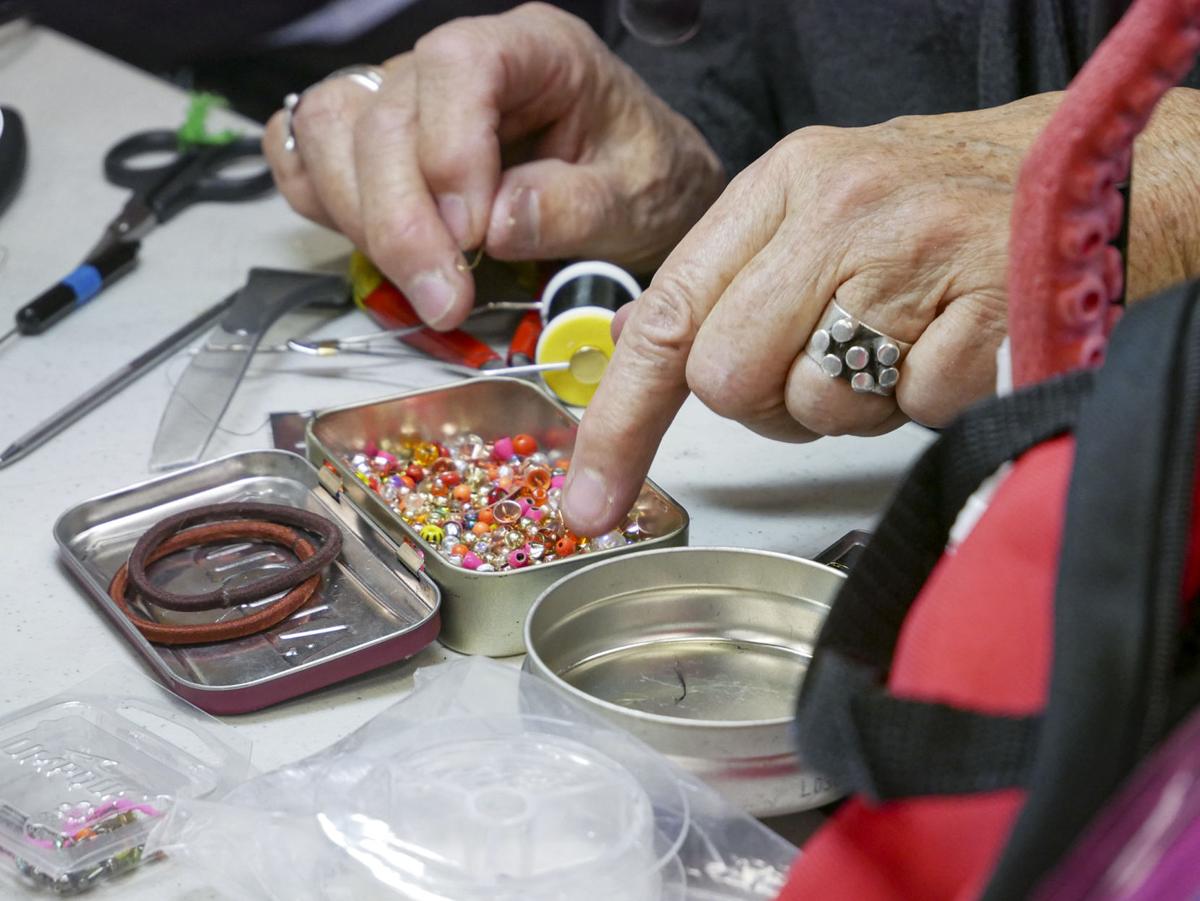 Holly Altman pokes around a tin of beads Jan. 19 during a fly-tying class at The Reel Life. Altman said she’s been going to the classes for the past couple of years and goes fly fishing with others who attend. 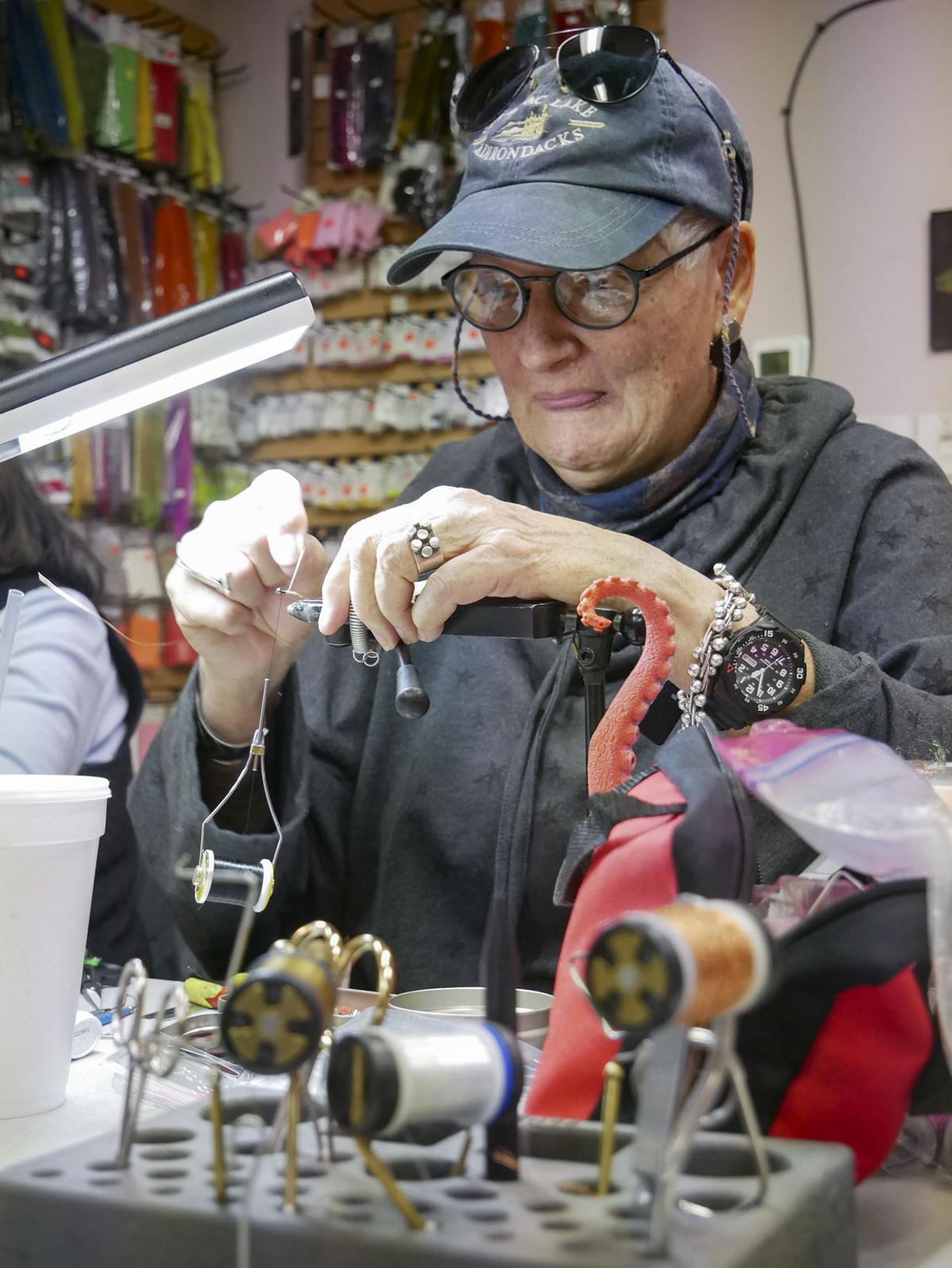 Holly Altman works on tying a fly on Sunday, Jan. 19, during a fly tying class at The Reel Life at DeVargas Center. 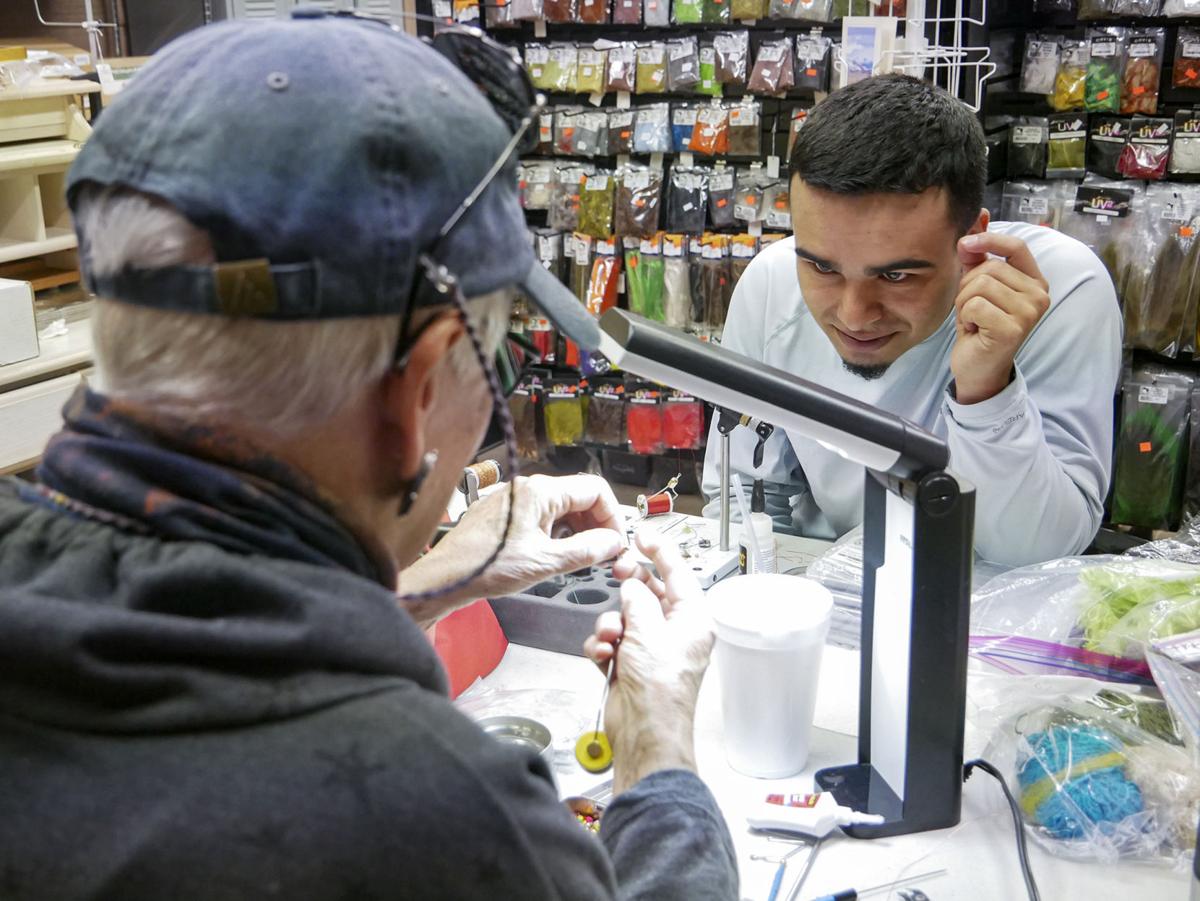 Miguel Salazar, right, an employee at The Reel Life, watches as Holly Altman ties a fly Sunday, Jan. 19, during a fly tying class at the store at DeVargas Center. 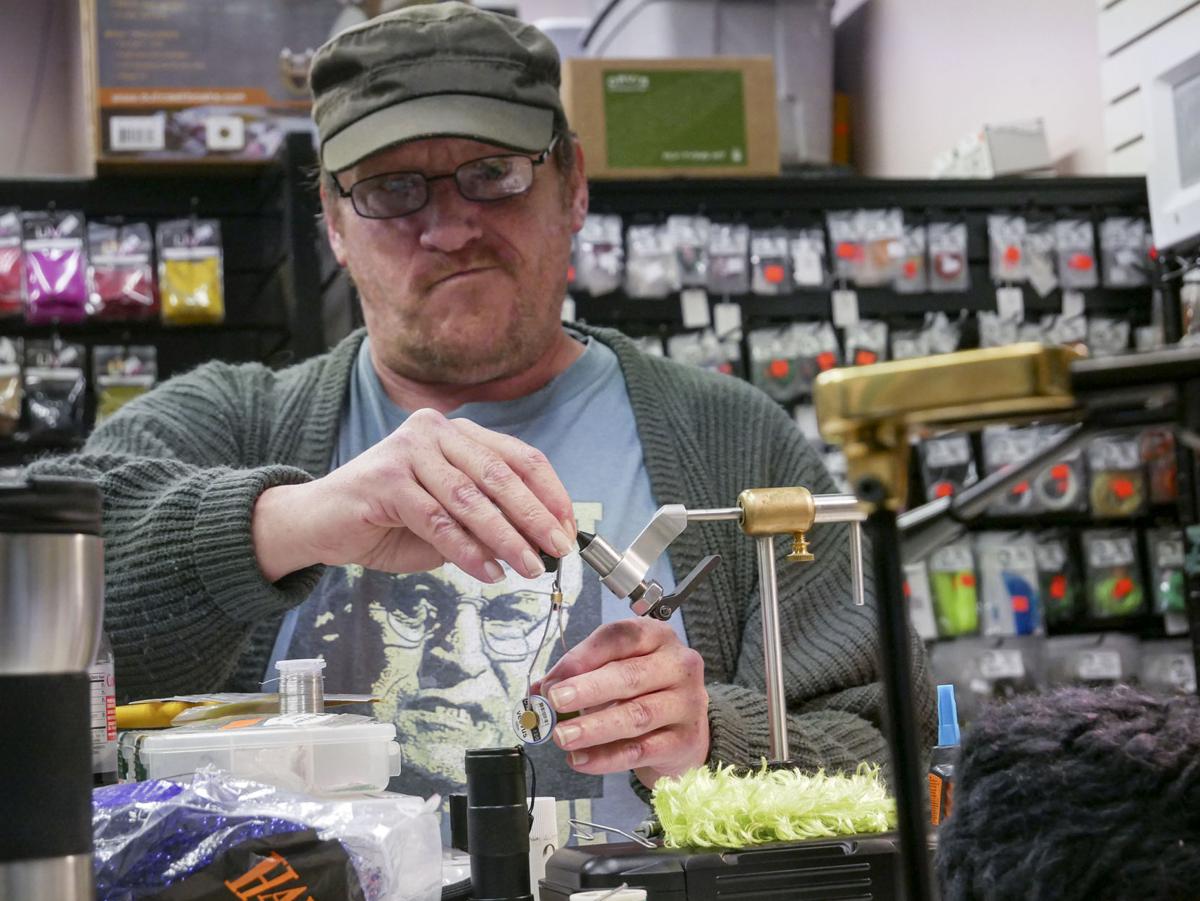 Gene Pacheco works on tying a fly Jan. 19 during a fly-tying class at The Reel Life. Pacheco said he’s been leading the free class each Sunday for the past four or five years.

Holly Altman pokes around a tin of beads Jan. 19 during a fly-tying class at The Reel Life. Altman said she’s been going to the classes for the past couple of years and goes fly fishing with others who attend.

Holly Altman works on tying a fly on Sunday, Jan. 19, during a fly tying class at The Reel Life at DeVargas Center.

Miguel Salazar, right, an employee at The Reel Life, watches as Holly Altman ties a fly Sunday, Jan. 19, during a fly tying class at the store at DeVargas Center.

While some people try to keep bugs out of their lives, others are making their own. Like works of art.

In a town where art seems to be the medium through which people speak, it’s not surprising that people are looking for new opportunities to express themselves. Perhaps that’s why some have chosen to sit behind a desk with a handful of tools in the winter months to create one of the tiniest art forms you’ll find anywhere in town.

You often can find Gene Pacheco, 71, sitting comfortably in the backroom of The Reel Life in the DeVargas Center, which offers free fly tying classes every Sunday. Pacheco, a retired state government worker, turned to fly tying as a way to pass the time. It turned into a decadeslong hobby. Granted, he’s been fly-fishing since he was 5 years old, but his hobby seems to have made him more invested in the sport.

His amiable personality attracts others who are either new to fly tying or have been doing it for as long as he has. It’s a type of social club, akin to a crochet or book club, where people with shared interests come together, trade stories and share a part of their lives. Keeping each other company is one way to stave off loneliness, idleness or keep the winter blues at bay.

Pacheco is eager to show off his creations, his own works of art that can’t be found in any downtown gallery or even in local fly shops. For him, that seems to be part of the appeal. He can survey the various material he has available — feathers of every sort, multicolored beads and a cornucopia of string of varying thicknesses — and he’ll know just what to use to match the image he creates in his mind.

Then, of course, he tests them out on the water. Many a guide at The Reel Life ties his own flies, including Nick Adler, who with Pacheco also teaches fly-fishing classes through the store.

“We’re actually not supposed to give the customers flies when they take the fly-fishing classes,” Pacheco said. “They’re supposed to buy their own, but Nick and I usually like to share with other people. We want them to catch fish, so we let them use our flies.”

Fly-fishing students and participants in guided trips will buy their own flies as part of their grand expedition into the New Mexico wilderness, but sharing one’s creations seems to be par for the course in the guiding world.

And the community aspect of fly tying doesn’t end when the last participant has put down his or her tools for the day. Holly Altman, a frequent visitor to the fly-tying workshops and classes, boasts a love of fly-fishing, which ultimately brought her to fly tying.

“I was a jeweler and a sewer in a former life,” she said, “so I’m used to working with my hands.” After Altman and her husband moved to New Mexico about 14 years ago, it took some time for her to get back into fishing. But, she admits, “I figured I better take it up again … for my mental health.”

Altman and other fly tiers seem to appreciate the high level of concentration and focus required to design and create a new fly.

“It’s an optimal experience with nothing else around” when you’re fly tying, she said, which is also the same response of people who have been knitting for years. Hours go by and Altman can look at her collection of new creations and find a sense of accomplishment.

Granted, plenty of people are comfortable tying flies on their own, but for Altman and many others, having access to other people with a shared interest makes all the difference.

“I didn’t think that it would be so much fun to get in with such a group of people, of friends, at this time of my life. When you are a part of a group and you share the same love of something — be it sports, stamps, baseball, whatever — and you develop friends through that ... one could say it’s a blessing.”

Of course, once you’ve tried your hand at tying flies, the next logical step is to get out on the water and see what they can do. The cycle of tying flies and then going out to fish with them can become something of an obsession for local anglers. “For me, fly tying really helped me round out my fly-fishing skill set,” said Gregg Flores, owner of Albuquerque-based Where the River Runs.

Flores, 33, is part of a group of outdoor enthusiasts who hope to share the wonders of fly tying with others throughout New Mexico. Fly tying “gave me a reason to better understand what fish are eating and how to imitate the food source,” Flores said.

As any avid fly-fishing enthusiast will tell you, that is one of the top reasons anglers opt for a fly rod instead of a traditional spinning rod.

Flores, Pacheo and Adler are so serious about sharing Altman’s “blessing” with the world that they spend hours each week trying to bring others into the fold, preaching the benefits of that intimate connection to the natural environment like a televangelist.

Flores has been working on his own fly tying coursework and hopes to unveil an online version of the course via his website, wheretheriverruns.com, in the near future.

“I’ve put more work into this course than I did my graduate degree,” said Flores, who has a master’s in structural engineering from the University of Colorado at Boulder. “It sounds insane, but it’s 100 percent true. There’s nothing like it in the world.”